Cinema attendant Leanne Robson, 47, of Stockport, Greater Manchester, turned up at her ex-boyfriend’s workplace and handed an A4 sized image of him naked to his manager

Cinema attendant Leanne Robson, 47, of Stockport, Greater Manchester, turned up at his workplace and handed the A4 sized image to his manager.

The boss did not look at the image, but Robson threatened to share the same explicit image, which was taken during their relationship, at Mr Bowden’s children’s school.

The court heard the mother of three also tried to kick 40-year old Mr Bowden down a flight of stairs during another confrontation at the Red Rock leisure complex where they both worked in Stockport.

The court heard the couple had begun a romance in March last year after meeting at work but the affair fizzled out the following September amid allegations he owed her money.

Robson was convicted of disclosing a private picture with intent to cause distress and assault by beating.

She admitted a further offence of common assault. Offences of disclosing private sexual photographs and films carry a maximum sentence of two years in jail.

Speaking of the incident on January 8th involving the pictures, Mr Bowden said: ‘I was watching the CCTV when I saw Leanne approach the building with her daughter.

‘I saw Leanne hand my manager a piece of paper and he came back into the office. It was an A4 piece of paper folded twice. I knew what it was as she told me she was going to do it. 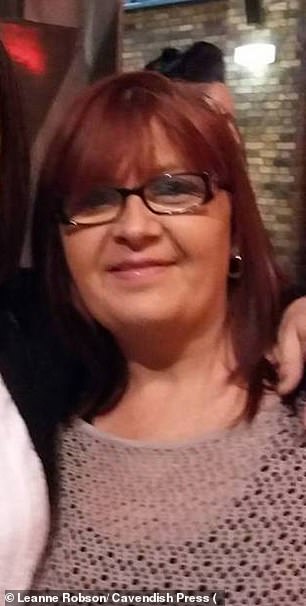 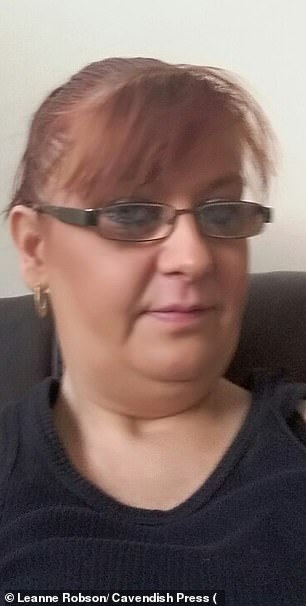 ‘She told me in various text messages in the weeks leading up to the incident. It was going to be an explicit picture I sent to Leanne whilst we were together.

‘She also took one of me whilst we were together. He came into the office and he said: ‘Leanne asked me to give you this’. I said: ‘I already know what it is’. I opened it and it was what I thought it was going to be.

‘I told her my mother had died as I just wanted away from her – even though my mother’s not dead.

‘She kept telling me she wanted money off me even though I didn’t owe her any money. She’s making it up about me owing her money.’ 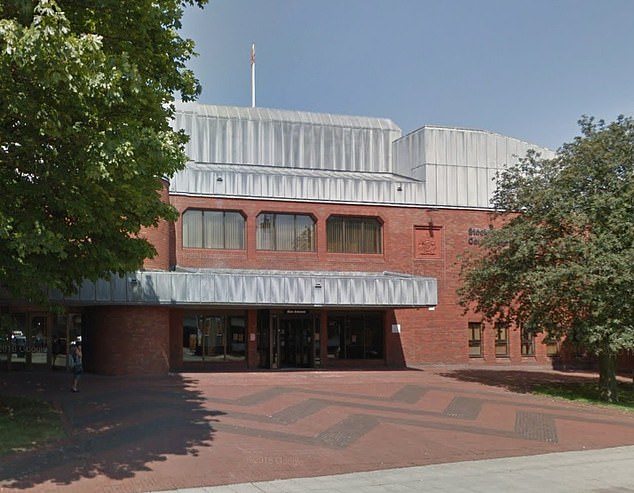 In April the guard was on patrol with his supervisor when he was attacked by Robson as she emerged from the cinema.

He told the hearing: ‘She was slapping, kicking, punching and swearing – calling me a ‘horrible b*stard’ and saying she was going to get me killed.

‘In the November I got a radio call that I had a visitor at the office, and as soon as I got up there I saw it was Leanne.

‘I walked away down the stairs but she came after me and started attacking me, swearing and shouting and punching me to the back of the head twice. She was saying she was going to get me battered and get me killed when I finished work and she tried to kick me down the stairs.

‘She put her foot at the bottom of my back and she pushed. I just went down a couple of steps and carried on walking but a couple of members of the public were telling her to calm down. She kept coming down to the office and it was disrupting my work.’

Robson did not give evidence at the hearing.

Her lawyer Kai Luckham said: ‘There are grounds to say the complainants evidence was not consistent.

‘He said there was threats to make these pictures available across schools – but no such evidence has been provided.

‘The complainant owed money to my client and she was seeking to persuade him to give it back. He was the victim of assault, which she has admitted to, when she was taunted, when she was laughed at. She lost her temper and she accepts that.

‘She is mortified by her own behaviour. The whole issue is about money.’

Robson is due to be sentenced next month following the preparation of reports. She was granted bail on condition she does not contact the victim.