From Duncan Edwards to Sean Dyche, the elderly gentleman sipping coffee in a Somerset village pub is a walking encyclopedia of English football history, and not simply because he’s the only living Englishman to have won a major European trophy as manager.

Tottenham great Keith Burkinshaw played with Big Dunc during national service — ‘a smashing lad and so good he was allowed to leave base every weekend to play for Manchester United’ — and 50 years later saw Dyche take his first coaching steps with Watford’s youth team as the club’s assistant manager.

Burkinshaw, now 82 but looking a decade younger, is best known for helping the glory days return to White Hart Lane in the Eighties, when he led a glamour team featuring Ossie Ardiles and Glenn Hoddle to two FA Cups and the UEFA Cup.

It is a neat coincidence therefore that he has chosen the White Hart pub close to his home in leafy Somerton, grandly titled the royal capital of ancient Wessex, to discuss his extraordinary career before another big European night for Tottenham, when Real Madrid come to Wembley on Wednesday night. 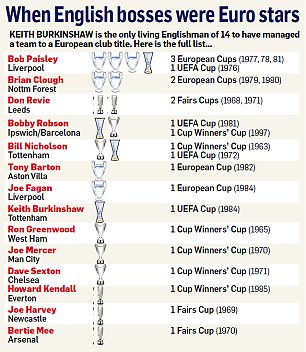 In his pomp, Burkinshaw pitted his wits against managerial legends Brian Clough, Bob Paisley and Bobby Robson. It’s a bugbear of his that today’s home-grown coaches such as Dyche and his former Spurs player Chris Hughton no longer get job opportunities reserved for the likes of Pep Guardiola, Jose Mourinho and Jurgen Klopp.

‘I don’t see why English coaches are degraded like they are,’ he says in a Yorkshire accent unchanged from the day he left Barnsley aged 18 to sign his first professional contract for Liverpool.

‘We read about how brilliant a Spanish or Italian manager might be but we also have good ones here that are never given the chance. Maybe it’s because a lot of the biggest clubs have foreign owners, I don’t know.

‘I see Chris at Brighton games because my daughters live in the town. He’s terrific, isn’t he? He never did a lot of shouting as a player, just did his job and did it really well. He’s the same now. If he went to Manchester City, he’d do well. He is organised and if you’re organised and have fantastic players, you’ll get results. 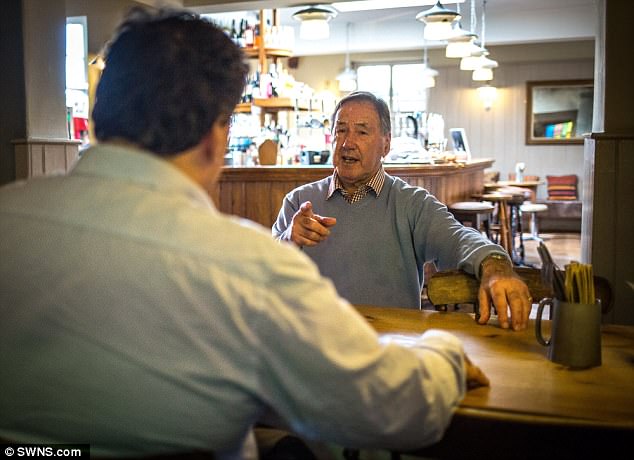 ‘Sean Dyche is the same. Very good defensively. He’d win things at Manchester United with the talented forwards they’ve got. Zinedine Zidane at Real Madrid has got Manager of the Year but if you have the best bloody players in the world, you’re going to have a side! How would the top managers do taking on Carlisle?’

Burkinshaw went down the pit at Dodworth Colliery for two years from the age of 16 and sees no reason not to speak his mind. But this is no dinosaur: as a manager he was often ahead of his time. During an era when most managers demanded to be called ‘Boss’ or ‘Gaffer’, his instructions to Tottenham’s players when he took over in 1976 were: ‘Keith is my name. Call me that.’

After relegation, he put the relatively small Steve Perryman in the centre of defence to build play from the back. ‘We beat Leicester in pre-season and their manager Frank McLintock said the style was great but would never work in the Second Division!’ he says.

Instead, Spurs won promotion at the first attempt and became one of the best footballing sides in the top flight, bolstered by the sensational arrivals from Argentina of Ardiles and Ricky Villa. 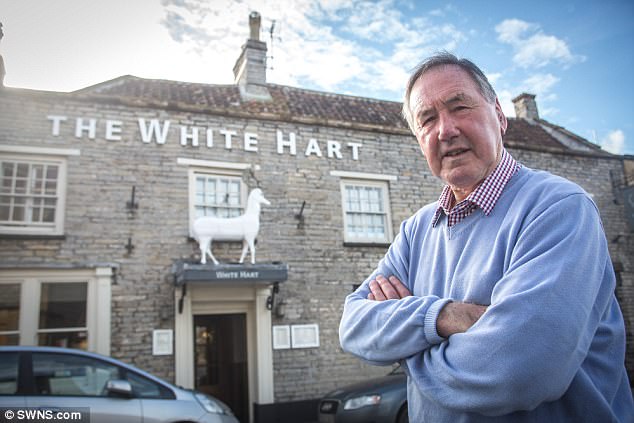 Burkinshaw had to compete against the greatest generation of managers England has ever produced. ‘I think being a miner for two years did me a great service. I had to earn some money because we had none, but coming through it gave me a lot of confidence. I felt I could handle anything,’ he says.

‘Bob Paisley was my trainer with the reserves at Liverpool. By the time I was a manager, his Liverpool team were the greatest side in Europe, but they stayed humble. I’d go to their famous Boot Room after the match, “Come in Keith, fantastic to see you, unfortunate today, you should have bloody beaten us”. They never bragged, even when they had won 7-0!

‘They were tremendous, the lot of them, Bill Shankly, Ronnie Moran, Joe Fagan. We’d get on the team bus and see Joe Fagan [Paisley’s assistant and eventual successor] on the pavement outside Anfield, walking home like a normal fan. That was just him.

‘Brian Clough was a one-off. I was sitting with him at a meal when Brian shouted across the table, “My board of directors are w***ers, aren’t they Mr Chairman”. The Nottingham Forest chairman just looked up and replied, “Yes, Brian”. I couldn’t believe it!’ 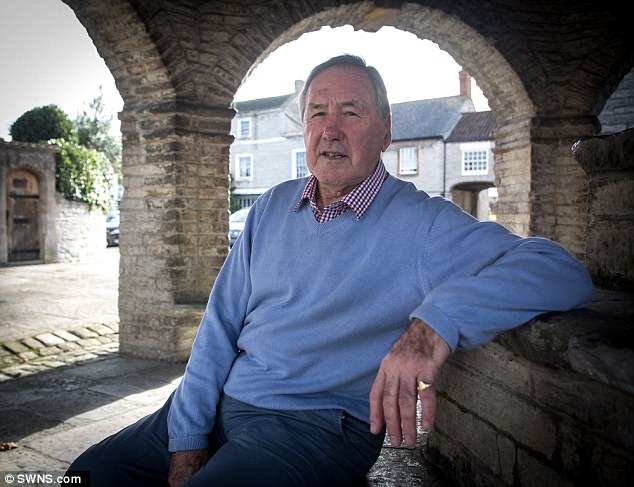 Burkinshaw guffaws at the memory, one of a million banked. The two-legged UEFA Cup final against Belgium’s Anderlecht in 1984 is high on the list.

Spurs drew the first leg 1-1 in Brussels but for the second were without the injured Hoddle, suspended captain Perryman and had 21-year-old Tony Parks in goal instead of Ray Clemence. On a dramatic night, Spurs gained another 1-1 draw and Parks saved the decisive penalty in the shoot-out.

‘We had a few kids out there, it’s a wonder we got a result,’ says Burkinshaw. ‘I tried to stay as calm as I could. I wasn’t one for prancing about, I thought it was more important to look at the field to see what was happening.

‘It capped a great few years. Glenn was the best technical player I’ve seen, with today’s perfect pitches he’d get into the Barcelona or Real Madrid team and be one of their best players. I also had a close relationship with my captain, Steve. Every Sunday, he’d ring and we’d talk for an hour about what had happened the previous week: the game, the training, individual players and what was coming up for the next week. We knew each other’s thinking and ideas. I always said to him that if he spotted something on the pitch during the game that needed changing, he should do it. If it didn’t work out, I’d take the blame.

‘Ray Clemence was signed from Liverpool in 1981 after he’d just won the European Cup. I’d played with him at Scunthorpe when he was starting his playing career and I was towards the end. He always said to me, “You made me, Keith, because you were so bloody useless, I had to be on my toes all the time!”‘ 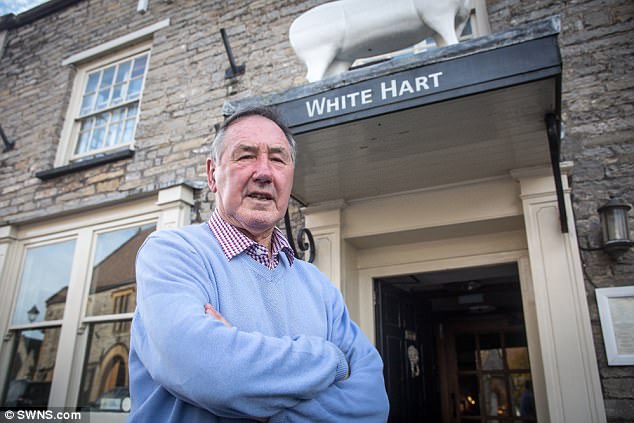 The icing on the cake of course was signing Ardiles and Villa, whose stunning arrival was front-page news.

‘The Sheffield United manager Harry Haslam called to see if I’d be interested in Ardiles. I replied, “Are you taking the p***?” Ossie had just been voted player of the World Cup,’ says Burkinshaw.

‘Harry was signing another Argentinian player [Alex Sabella] but couldn’t afford Ossie. I flew to Argentina and only had to speak to Ossie for 20 minutes before I knew he’d join us. His wife told me later it was down to her because she wanted to come to England!

‘We ended up signing Ricky as well. Arsenal’s manager Terry Neill had wanted him but their board of directors weren’t interested.

‘The best thing I did was find a place for both families to stay together with friends, parents, cousins, for eight weeks. It helped them settle. I only had one gripe with Ossie, he’d always stop and ask me for a cigarette and I didn’t smoke!’ 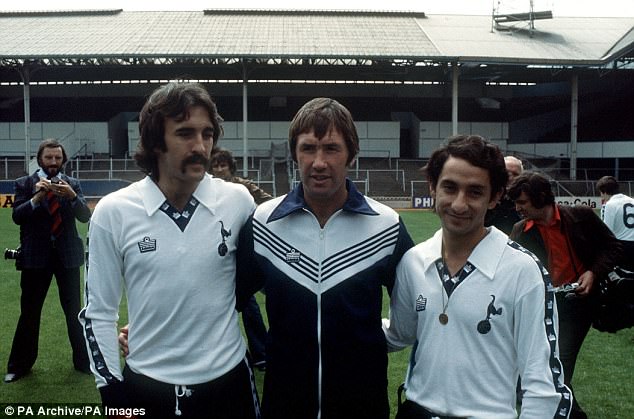 Burkinshaw was at Barnsley Grammar in the same year group as Michael Parkinson and his army stint took place in mid-Wales, where he once missed the lorry back to base after a dance in Aberyswyth. ‘I had to walk 40 miles through the middle of nowhere and got back the following afternoon,’ he says.

He left Spurs after the 1984 UEFA Cup win — he’d taken the decision before the final, having been told by the club they wanted to control the transfer policy. He infamously said at the time ‘There used to be a football club over there’ but the wounds have long since healed and Burkinshaw was a guest at White Hart Lane for their final match before stadium redevelopment. ‘It’s a special club,’ he says now.

Life wasn’t dull after Spurs either with jobs in Portugal, Bahrain and Malaysia, as well as a spell as manager at West Brom and at Aberdeen as director of football.

Today, he keeps in close touch with the game through his grandson Jack, who is a sports scientist at Celtic. 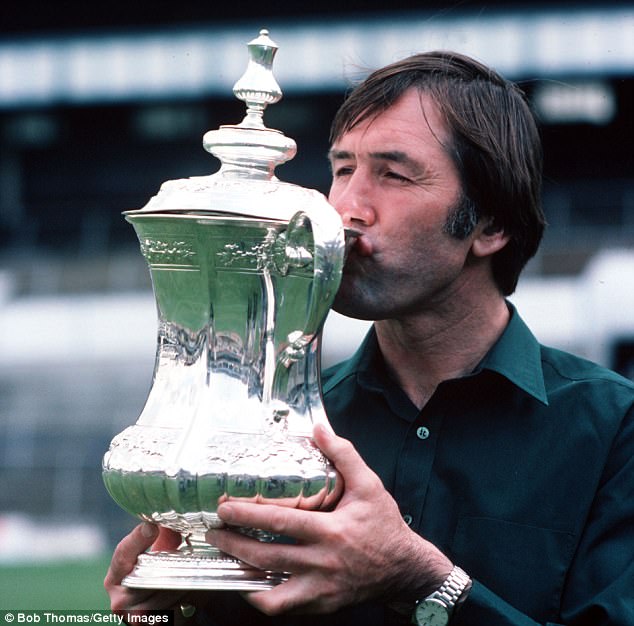 Burkinshaw led Tottenham to two FA Cup triumphs, winning it in 1981 and then again in 1982

‘It’s amazing how things have changed at the big clubs,’ says Burkinshaw. ‘The support staff for the players is enormous. When I was Newcastle’s first-team coach to Joe Harvey, we didn’t even take a doctor to away games. If something happened, I’d be the one to go on the pitch and attend to it.’

He loves the way modern Spurs are progressing. ‘[Mauricio] Pochettino is terrific. He’s given the English kids a chance. Harry Winks has come in, a very good player and going to get better. Harry Kane and Dele Alli stand comparison with any era. The goals that Kane gets with both feet is unbelievable. He’s always a danger around the 18-yard box.’

Howard Kendall, Robson and Fagan are the only English managers to have won European trophies since Burkinshaw and all have passed away. The last Premier League clubs to win Champions League or Europa League have done so under an Italian (Roberto di Matteo), Portuguese (Jose Mourinho), Spaniard (Rafa Benitez), Frenchman (Gerard Houllier) or Scot (Sir Alex Ferguson),

Burkinshaw was bright enough to have studied and earn a living outside football. But he’s grateful for a teacher’s advice when he had to choose at 16 between staying at school and playing for Wolves while working down the mine.

‘Listen son, anyone can take A- levels — not many can go to Wolverhampton Wanderers,’ came the reply.

Given Burkinshaw’s historic journey since, it was the right call. 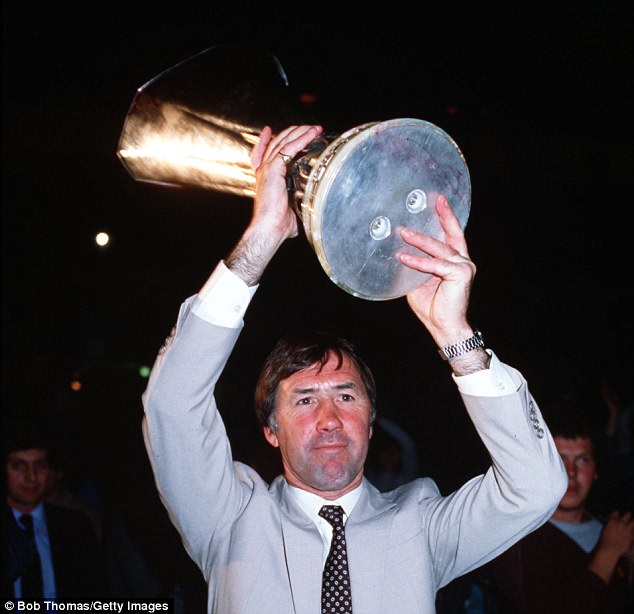