Sri Lanka terror attack: Heart-broken husband says he has ‘lost my best friend in the world’

British IT director Lorraine Campbell, who was last night confirmed as the final British victim of the Sri Lanka terror attacks, had been texting her husband when she was killed by a suicide bomber.

Husband Neil Evans was exchanging messages with the 55-year-old as she sat down to have breakfast on the first day of a business trip in Colombo, when she abruptly stopped replying.

The mother-of-one from Manchester, was killed when a terrorist – who had just served himself at the buffet – detonated a bomb within feet of her at the Cinnamon Grand Hotel.

She is one of eight British victims to die in the atrocities which killed more than 350 people.

IT director Lorraine Campbell, 55, from Manchester, has been confirmed as the final British victim caught up in the Sri Lanka terror attacks on Easter Sunday

‘[Neil] was texting her when she was in the restaurant in the morning and then the texts stopped. Then the report came out and he put two and two together, same hotel,’ her son Mark said.

The successful businesswoman, known as ‘Loz’, had relocated to Dubai to work for a large firm last year with her husband who flew out to Sri Lanka after hearing that she could not be found.

Her devastated husband confirmed she was among the 359 dead in the co-ordinated attacks, calling her his ‘best friend in the world’.

Mr Evans said: ‘Lorraine was a real tour de force, she epitomised the qualities she lived by, and was a conduit for bringing people together to both make things happen, and make them better.

‘I’ve lost my best friend in the world for all the adventures we shared and planned for the future. 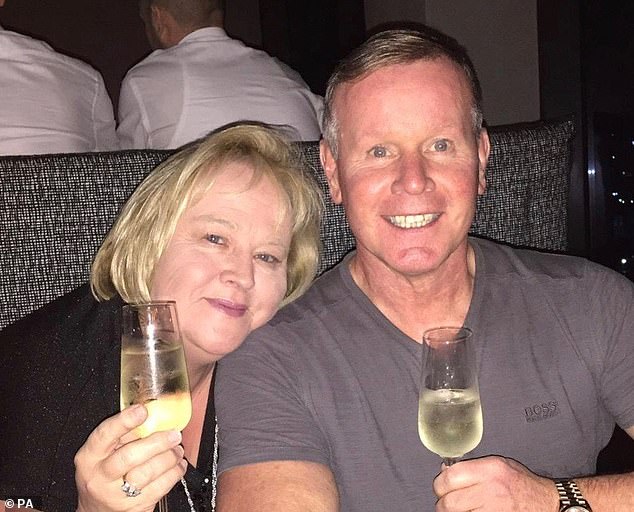 Her devastated husband Neil Evans, who married the mother-of-one in February, said she was his ‘best friend in the world’

‘I, Lorraine’s family and friends are in a state of disbelief and grief for what has happened and as such, would respectfully ask that our privacy at this difficult time is respected.’

Lorainne was last seen alive on CCTV footage having breakfast with colleague Juno Srivastava at the hotel’s Taprobane restaurant. The pair been on a business trip while working for Al Futtaim – a firm which runs shopping centres across the Middle East.

Indian national Mr Srivastava, who is married with three children and also works as a lecturer for Middlesex University’s Dubai campus, was still missing last night and is feared dead.

Lorainne’s son Mark Campbell, from Stalybridge, Greater Manchester, said his mother remarried in February last year after finding ‘everything she ever wanted’ in businessman Neil.

The 32-year-old said: ‘Mum never thought she would get married again but she met Neil who was everything she wanted in a man – smart, intellectual and successful in his own right.

‘He gave up his business career here to start a new life in Dubai with Mum. They had a three year plan to make some money tax free and then come home to enjoy life,’ he said.

‘To my mum I was her world so to have to tell me that she didn’t make it would have been really hard and I knew he [Neil] was also alone.

‘I just want to bring my mum home and I want to give everyone who knew her… the opportunity to come together and celebrate this beautiful woman.’

He had previously told the Mail: ‘I have been told it is her although she has got to be formally identified. I know it is my mum. She has been taken from us in a terrible way.’

A suicide bomber – who had checked into the hotel the night before the attack as Mohamed Azzam Mohamed – had waited patiently in line at the breakfast buffet with a plate in hand.

An employee at the hotel, who had reviewed CCTV footage, said: ‘He had a couple of servings before he came right to the centre of the restaurant and blew himself up.’

Dhivya Marunthiah, who is a volunteer helping in the search for missing people, said: ‘Both Juno and Lorraine were sat very close to the blast area.

‘Footage inside the hotel shows them having breakfast together near to where the bomb was detonated in the moments before.’

Mr Campbell, who works in music management, said his mother had been anxious about travelling to the island ahead of her fateful visit.

He said: ‘She had messaged me before the trip to say she was nervous about flying there because of Dengue fever.

‘She was quite worked up about it but I told her she would be all right. I never thought something like this could happen.

‘Mum was amazing. She touched everyone she met and all those people now have a huge hole in their lives.’ He added: ‘I saw her only a couple of weeks ago when she came back for Mother’s Day which was really nice.

‘She had only been in Sri Lanka for a day for work. I think her company had some dealers or suppliers she needed to meet.’

‘Mum was a strong woman. She was an IT director who couldn’t turn on a lap top but her strength was people, getting results and generally getting the job done.’

Yesterday it was revealed that two fathers who saw their British children killed in the attacks embraced as they searched for their families in the bloody aftermath of the bombings.

Matthew Linsey told yesterday how he met Ben Nicholson as they searched for their children in a hospital.

Mr Linsey, 61, told the Mail: ‘We hugged and tried to support each other. We helped each other.’ 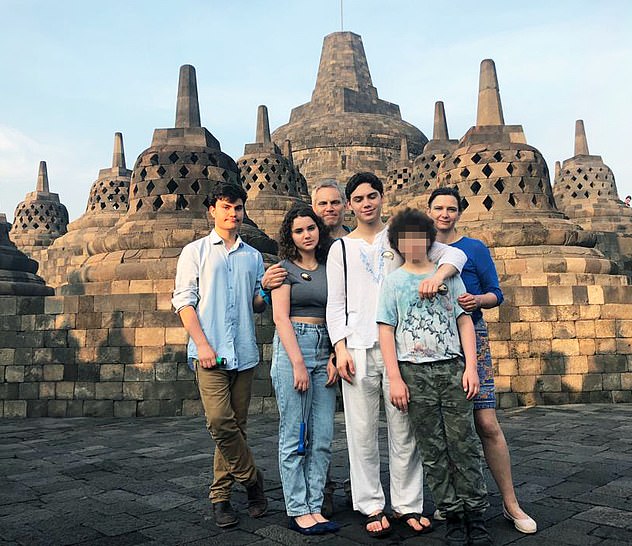 Sri Lanka bombings:  From left to right Daniel and Amelie who died in the second blast, with father Matthew, older brother David and mother Angeline – at the Borobudur Indonesia Temple 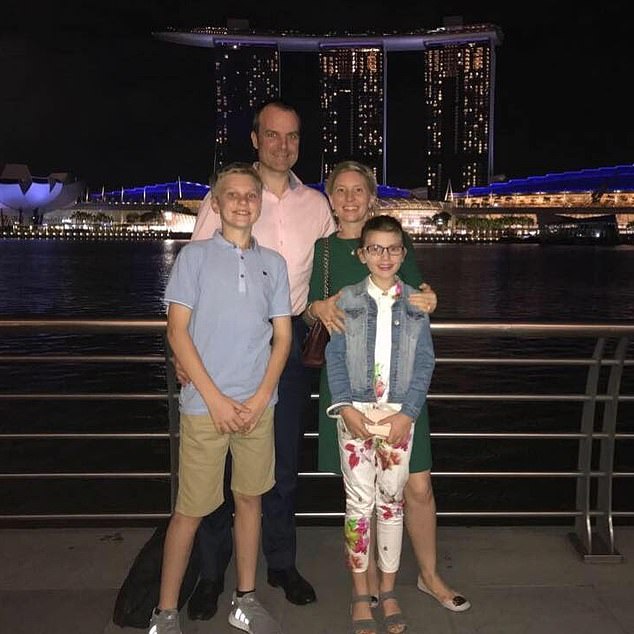 Mr Nicholson (pictured with his family) has revealed his family were dining inside the Table One restaurant in the Shangri-La hotel, Colombo, when the bomb hit and ‘mercifully died instantly and with no pain or suffering’

Hours earlier they had been strangers having breakfast in the Table One restaurant at the Shangri-La Hotel in the capital Colombo with their families when it was bombed.

In the first blast, Mr Nicholson’s wife Anita, 42, his son Alex, 14 and daughter Annabel, 11, were all killed instantly.

Investment manager Mr Linsey and his children Daniel, 19, and Amelie, 15, tried to flee, but the teenagers died in a second blast designed to target survivors and any rescuers rushing to their aid.

In a TV interview, Mr Linsey described his last minutes with his children.

Speaking to CNN in his London garden as eldest son David, 21, held him, Mr Linsey said the bomb was like a ‘wave of pressure’, and told how his children were serving his breakfast when the bomb exploded. 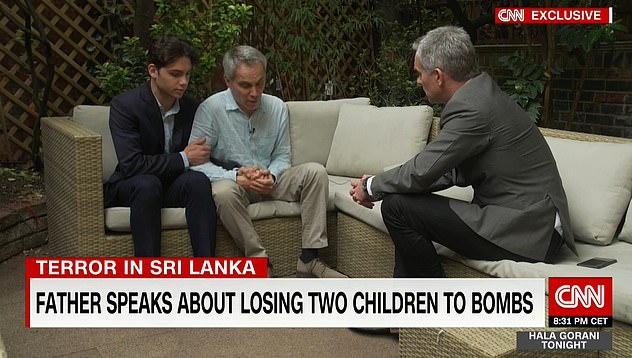 He added: ‘My children were so nice – they actually went down to the buffet and filled up my plate.

‘Then I wanted more to drink. I was going to get it, my daughter said, ‘No, I’ll get it’ – and then the bomb went off and they both were running toward me, and I’m not sure whether that’s what killed them or not.

‘I knew there’d be another bomb because there always is.’

He said he wanted to escape as fast as possible with his children but the three of them fled straight into the second blast, adding: ‘Maybe I should have just stayed and covered them with my body.’

He revealed how he tried to revive Daniel, a student at Westminster Kingsway College, before helping to carry him to an ambulance.

Mr Linsey said: ‘They both were unconscious. My daughter seemed to be moving, my son wasn’t. A woman offered to take my daughter downstairs to the ambulance – I needed help moving my son.

‘Someone helped me move him down the stairs and they both ended up in the same hospital.’

He added: ‘I lost track of my daughter in the confusion. 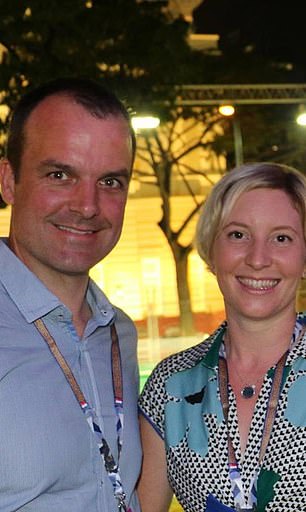 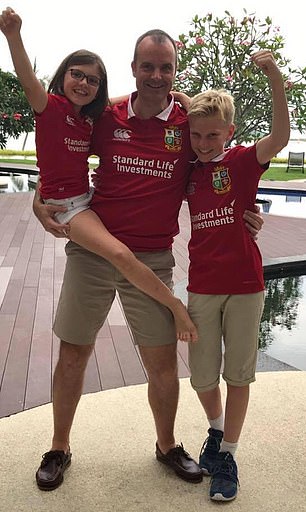 British lawyer Mr Nicholson with his wife Anita (left) and children Alex and Annabel (right), who were killed ‘instantly’ in the Sri Lanka terror attack on Easter Sunday

‘I went with my son. I yelled and screamed for them to help him. The doctors did try, but the equipment was rudimentary.’

He later found Amelie – a pupil at the Godolphin & Latymer School in Hammersmith, west London – dead in the hospital. It was there that he met Mr Nicholson looking for Alex.

Mr Linsey, who has returned home to central London to be with his wife and other two sons, who were not on the holiday, said he was still in touch with Mr Nicholson, adding: ‘He is a lovely man. I spoke to him today. He is still there trying to organise the repatriation of his family.’

Mr Nicholson, 43, a lawyer from Essex who lives in Singapore, has told how his ‘perfect’ family ‘mercifully died instantly’ with ‘no pain’.

Mr Linsey also described the distressing wait to have his children’s remains returned to him.

The father of four added: ‘I had to send photos of my two children to a doctor in Sri Lanka so he can identify them. I wish they could speed up the repatriation of the bodies.’

Amelie and Daniel were born in Britain but had both US and UK citizenship because their father was born in America.

‘The US Embassy may have had more staff but the ambassador saw me twice. I also had a Marine stay with me and a legal adviser got me out through road blocks with diplomatic plates. We need more communication on the ground.’

The number of people killed in the atrocities in which churches and luxury hotels were targeted has risen to 359 – with more than 500 wounded. 39 foreigners are among the dead.

Another 18 suspects were arrested overnight, raising the total detained to 58.

Sri Lankan defence minister Ruwan Wijewardene revealed on Wednesday that there were a total of nine attackers, eight of whom have been confirmed dead.