With social distancing in full swing as bars, restaurants and schools are forced to close their doors due to the coronavirus outbreak, it’s been a St Patrick’s Day with a difference this year.

Normally the Irish and Irish-for-a-day only have to grapple with whether to break Lent or not come March 17 but with the coronavirus pandemic closing down many of the main parade and events, the 2020 celebrations have gone online.

But there’s still plenty of music, dance and craic to be had.

From the Irish American favorites Dropkick Murphys and Riverdance stars, to America’s biggest Irish festival, nothing is stopping the St Patrick’s Day festivities from continuing, even if the pints of Guinness have to be shared via Skype while friends all sit at home.

One Irish bar has even donated their corned beef and cabbage to charity as they can’t serve it to customers. 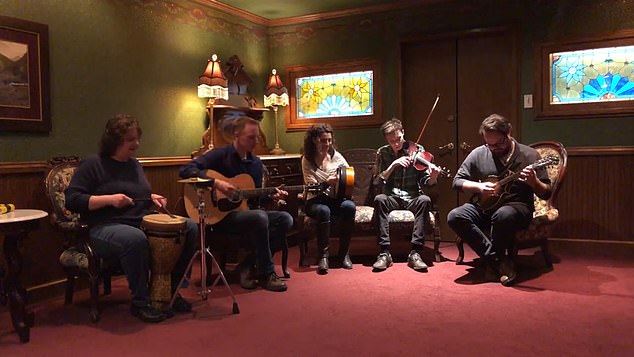 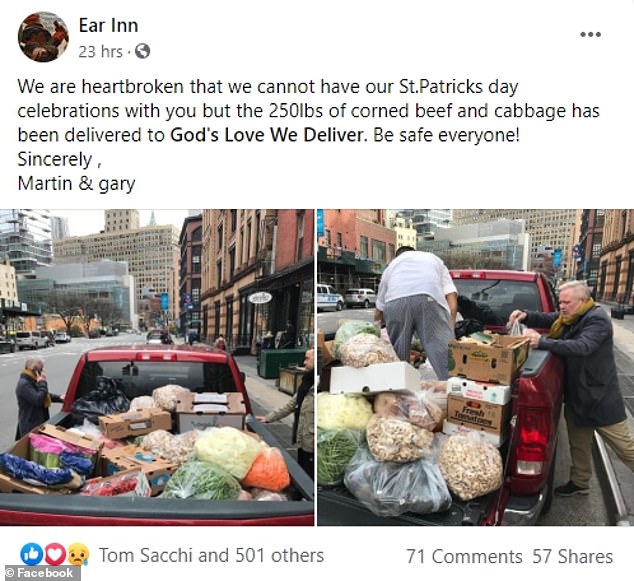 The Ear Inn in Manhattan, the oldest working bar in New York City, shared a picture on Monday of the stock of corned beef and cabbage they’d readied to celebrate Ireland’s patron saint that was now being delivered to a local charity.

The pub was forced to board up its doors along with ever other bar in the city on Tuesday morning just as they would normally be readying themselves for a wave of green-clad, ravenous customers.

Owners Martin and Gary piled all the supplies into the back of a truck and dropped it off at God’s Love We Deliver to make some people’s St Patrick’s Day a little brighter.

The main parade may not have stepped off up Fifth Avenue in New York City on Tuesday morning but that didn’t stop some dedicated marchers from getting there before sunrise to ensure there was no break in tradition.

There are generally 234 marching units in the New York St Patrick’s Day parade but that was cut down to two for 2020: the Fighting 69th Regiment, who proudly start the march every year, and members of the parade committee who were determined to keep the 258-year cherished tradition alive, coronavirus or not. 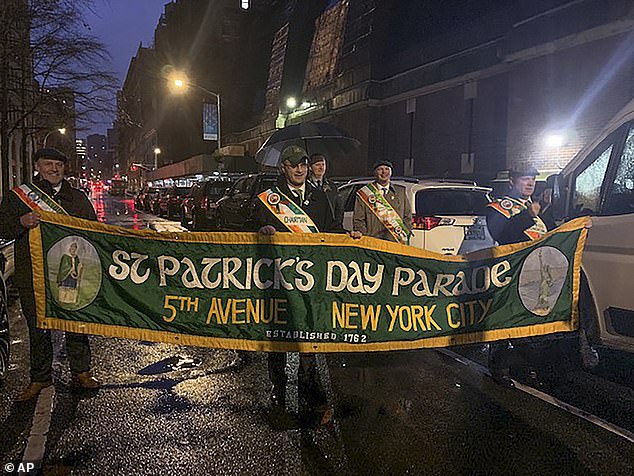 Board members of the St. Patrick’s Day Parade prepare to march in an impromptu parade, Tuesday, March 17, after the main New York Parade was canceled due to coronavirus 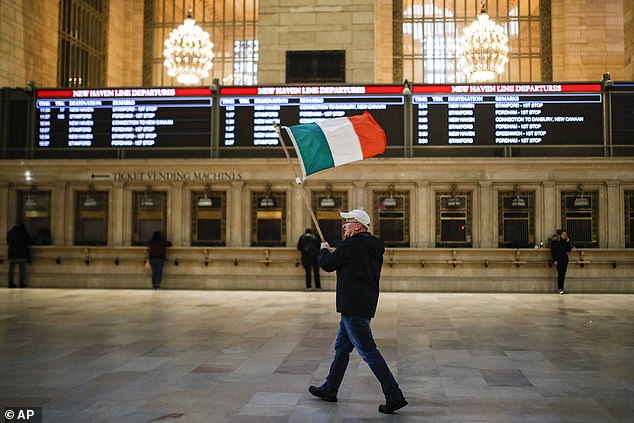 Dermot Hickey waves the Irish national flag in Grand Central Station after expressing his disappointment in the cancellation of the St. Patrick’s Day parade due to conoravirus

‘We understood totally why the parade had to be postponed. The health and safety of all, which includes the thousands of firefighters, police offices and health care workers who take part in our parade, is paramount,’ Sean Lane, the parade’s chairman, told IrishCentral.

In Boston, Irish American rock group Dropkick Murphy were set to be heading up the celebrations in their normal rambunctious before cancellations hit.

Yet for disappointed fans who thought they were missing out on seeing them live on Tuesday night, the band will now be livestreaming their gig for the world to hear.

Kicking off at 7pm EST, the group will be ‘Streaming Up From Boston’ via their Facebook page after they decided ‘the show must go on’. 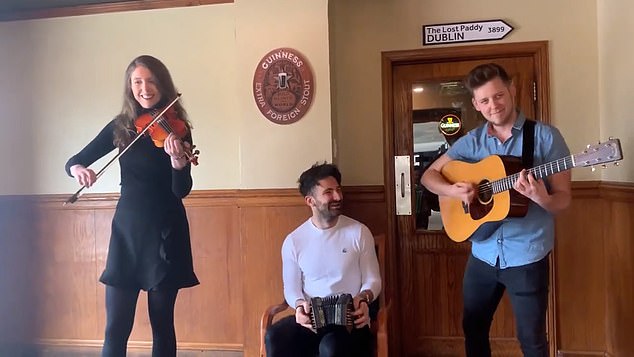 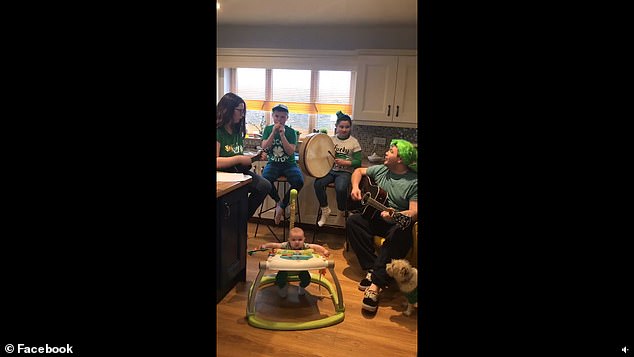 A ‘virtual’ St Patrick’s Day is also being held by Milwaukee Irish Fest, the largest Irish festival in North America, which each August welcomes over 100,000 lovers of Ireland to explore all the Irish music, dance and culture they can handle.

Throughout March 17, they used their Facebook page to share videos of some of Ireland’s best performers, as well as some up-and-coming stars.

The festival also made a call for pictures of how people around the world were celebrating now that none of us can gather together and received replies from all over the United States, as people shared their corned beef and cabbage dinners and Irish Carbomb cupcakes.

‘At least there is Virtual St Patrick’s Day! (In the frame on the left in my photo is my grandfather’s medal for service in the Irish War of Independence 1919-1921.). Try and enjoy the Day!’ 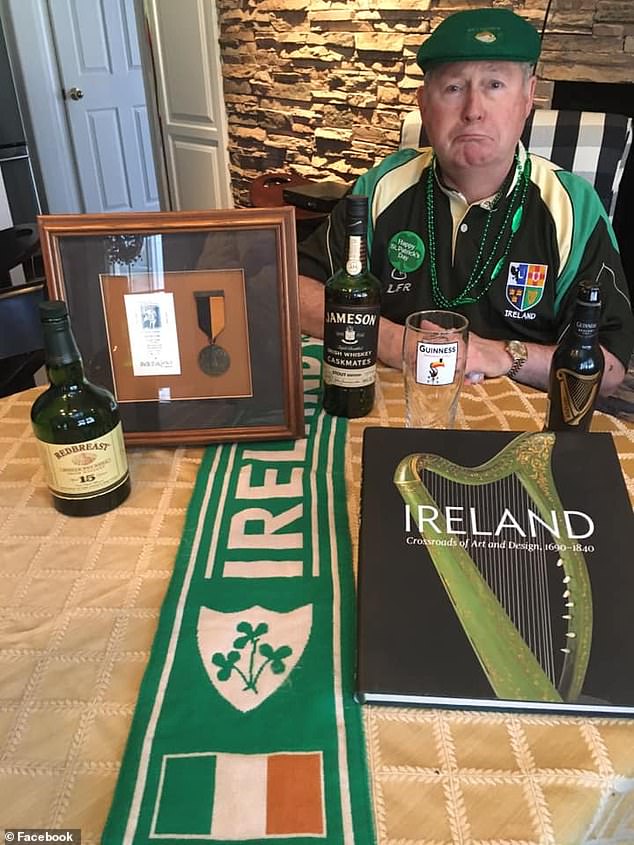 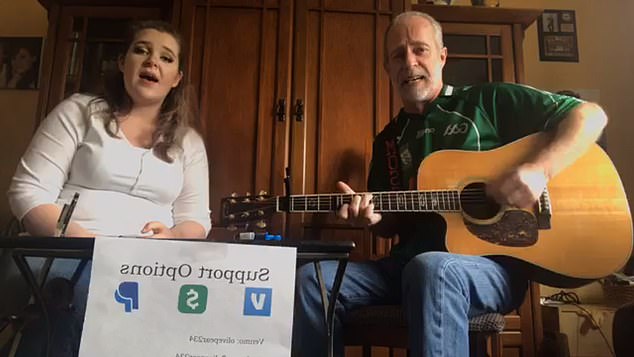 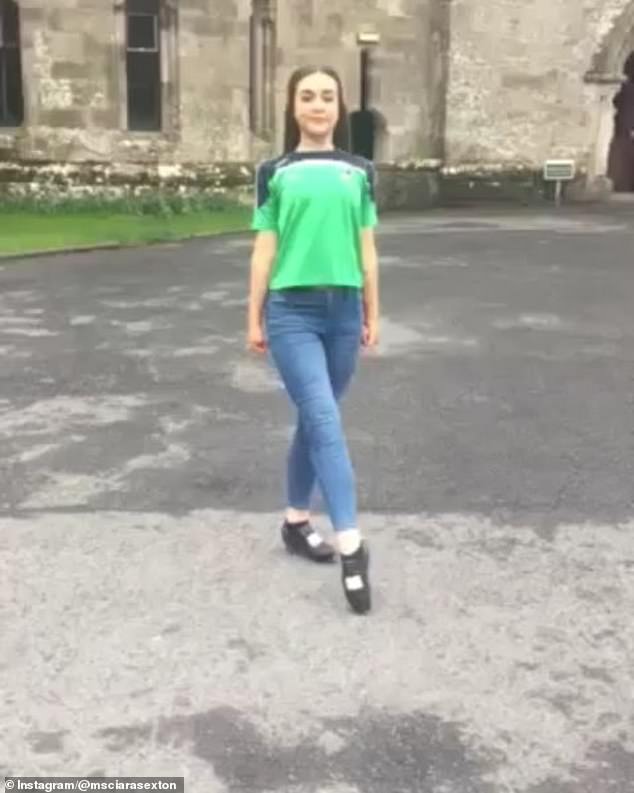 Ohio-based Irish musician Mossy Moran also decided to try his arm at a Facebook live gig on Tuesday alongside his daughter Molly and while the family dogs did their best to get in the way, the luck of the Irish pulled through and the father-daughter duo will continue their live shows via social media throughout March 17.

The pair will perform for the second time, hopefully with dogs still around, at 5pm EST.

Irish dancers were also left without a stage to show off their talents this St Patrick’s Day until Riverdance star Ciara Sexton stepped in.

She established the #StPatricksDayStepAbout movement to give disappointed dancers an outlet to display the routines they’d practiced so hard for the big day.

‘Irish Dancers, parents & Teachers – Getting cabin fever? A couple of us teachers have come up with an idea to get us all dancing the same step for St. Patricks Day!’ Sexton wrote.

‘Get out your jig shoes and either learn this step or create your own! Add the hashtag and we will create a collage! Lets bring our ID community together around the globe for a good old St Patrick’s Day Step About!’

Dozens of dancers across the U.S. took part and posted their videos.

‘Wish I could be out jiggin in all the Irish pubs today, but I’m joining Irish Dancers from all over the world in a virtual step about this year instead!’ wrote dancer Rebecca Kender.

‘Keep up the festivities at home!’

‘A very Happy St. Patrick’s Day from Mr. Dancing Feet, the girl who took the video, and the mother who hauled the board!’ added dancer Nats, who performed out in the snow.

‘Especially during times like these, dancing brings us all together.’