A former Sydney Catholic college principal who preyed upon boys at his school in the 1970s has been handed a three-year community corrections order.

The 81-year-old, who has a pacemaker and is diagnosed with depression and diabetes, appeared at the Downing Centre District Court on Friday with a walking stick in hand.

Judge Ian McClintock said Lennox had a ‘catalogue of maladies’ that might make his everyday existence in the custodial system ‘somewhat excruciating’.

But he said victim impact statements tendered earlier in the year made for an ‘outline of trauma and bewilderment’ and were a testament to the long-term damage caused by the sexual abuse of children.

‘They are entitled to grow up free from the defilement of sexual predators,’ Judge McClintock told the court.

‘The offender was in a very significant position of trust and manifestly abused it on multiple occasions with multiple victims.’

One student, then aged 12, was set upon by the Christian brother after being kicked out of science class in 1977.

Led to a chemical room and questioned about why he was out of class, the Year 7 boy was fearful he was going to get the strap, court documents showed. 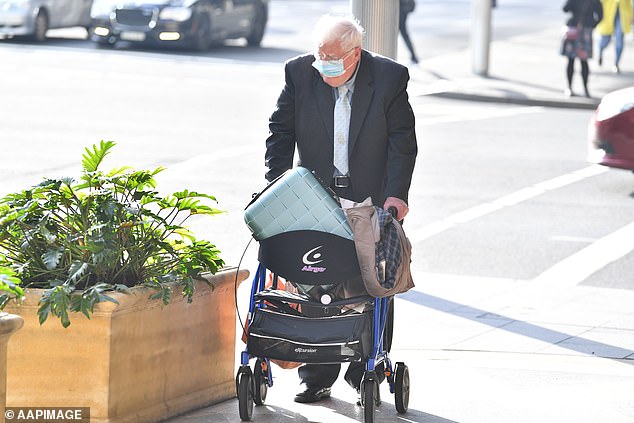 The 81-year-old, who has a pacemaker and is diagnosed with depression and diabetes, appeared at the Downing Centre District Court on Friday with a walking stick in hand

But instead, Lennox spent five to 10 minutes rubbing his hand over the crotch of the boy’s school pants as the student looked at the ground and cried.

Lennox, who was appointed principal of St Paul’s in 1972, also abused a Year 9 student who’d come to his office seeking permission to go home sick in 1974.

Once inside the office, Lennox asked the boy ‘Where does it hurt’ and ‘How sick are you’ before directing the 13-year-old to take off his pants and underpants.

When his principal touched his genitals, the boy froze and endured two minutes of abuse.

The victim, now in his 60s, previously said the abuse led to bedwetting and he’d since battled with mental health issues and episodes of homelessness.

After telling friends and his brother, he was ridiculed as though ‘I asked for it’ and he experienced further pain in having to give evidence at a 2018 trial.

In that trial, the jury was unable to return verdicts on the two charges but did find Lennox guilty of three other crimes committed at Manly and St Patrick’s Goulburn.

Lennox served six months in prison and was facing retrial on the remaining charges before the admissions made in July.

He also admitted abusing a third boy, who he called out of class to his office in 1975.

Lennox was first arrested in 2014 and committed for trial in 2015, but health issues caused repeated delays and postponements.

Judge McClintock said he was highly unlikely to re-offend.