Stacey Solomon has given birth to her first child with boyfriend Joe Swash ‘a lot earlier than planned’.

The Loose Women presenter, 29,- who already has sons Zachary, 11, and Leighton, seven, from previous relationships – and Joe, 37, revealed the news on Instagram on Thursday evening.

Posting a sweet snap of Stacey cradling their newborn baby from her hospital bed, Joe said he feels ‘overwhelmed and overjoyed’ to ‘watch the love of my life, bring a new life into the world’.

Baby: Stacey Solomon gave birth ‘a lot earlier than planned’ to her first child with boyfriend Joe Swash on Thursday

He wrote: ‘This morning. A lot earlier than planned I watched the love of my life, bring a new life into the world.

‘We are overwhelmed, overjoyed and apprehensive of what’s to come. Mummy and baby are well and resting. We are so grateful for all of the love, support and positivity we’ve received over the last 8 months.

‘I’m lost for words to describe how I’m feeling. So for now, I’m going to spend the next few days and the rest of my life falling more in love with these two humans. I didn’t think it possible but, today I witnessed the impossible. 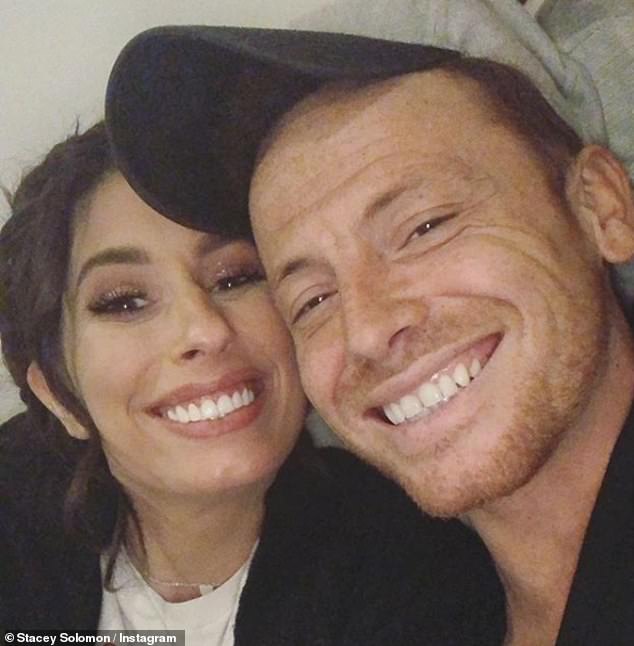 Bursting with love: In a touching post, she thanked the ‘love of my life’ Joe Swash and said she feels ‘overwhelmed and overjoyed’ to bring a ‘new life into the world’

‘My partner, My love, my life, you are a super human. I am forever in awe. Joe X’

The presenter shared the post – which was accompanied by a picture of Stacey after giving birth, with their baby covered by a blanket – on his own Instagram account, as well as sharing the same message on Stacey’s account on her behalf.

The couple have not disclosed the baby’s gender, or any further details about their new bundle of joy. 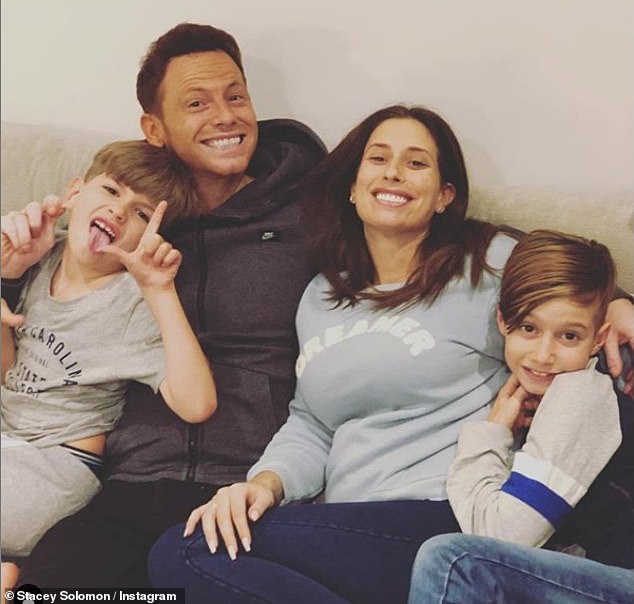 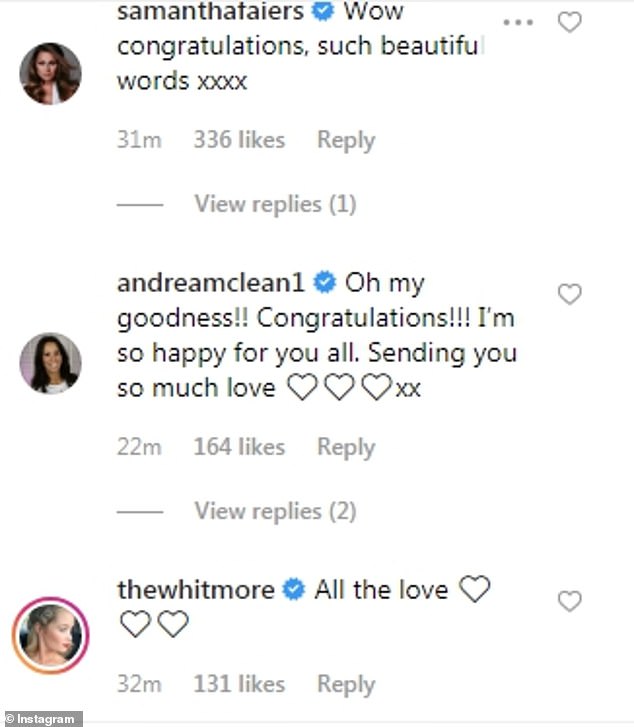 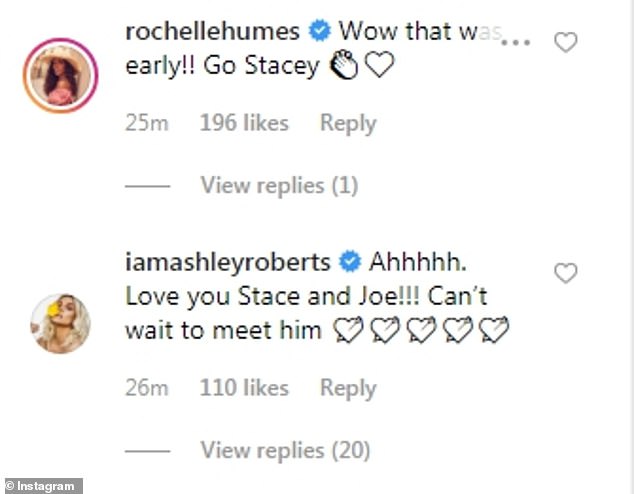 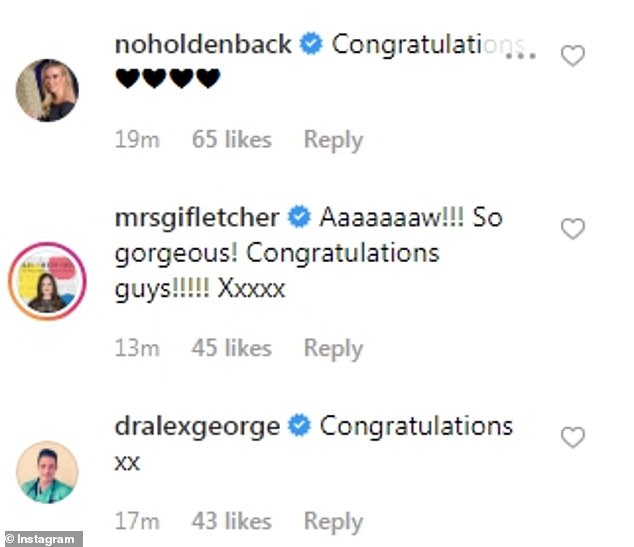 Delighted: Following the news, many of the pairs showbiz pals have sent their well wishes to the couple

The star appeared on Loose Women on Wednesday, but just hours later unexpectedly went into labour.

It is believed to be around a month earlier than her due date.

The show had planned throw the former X Factor star a big baby shower on Friday.

Following the news, many of the pairs showbiz pals have sent their well wishes to the couple. 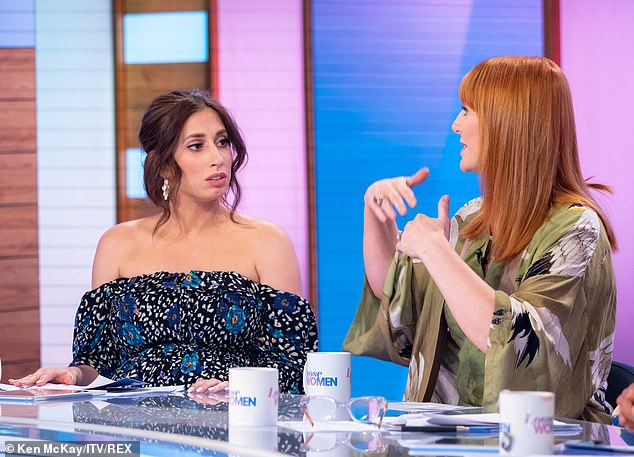 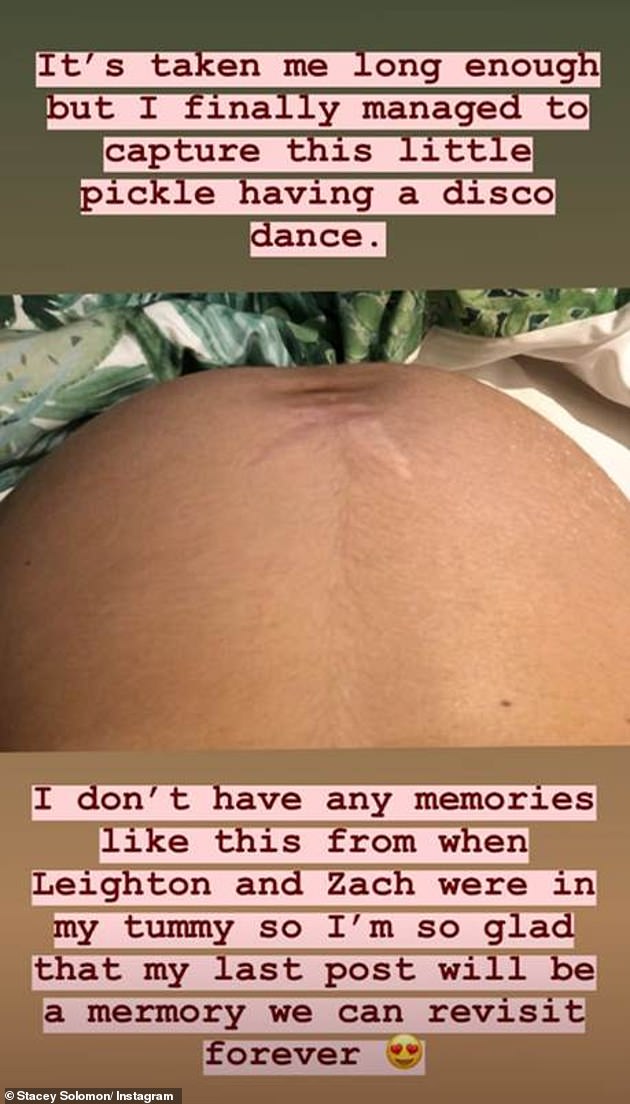 Sentimental: Stacey has been keeping her fans updated with her pregnancy journey and last week shared a sweet video of her ‘alien’ bump to Instagram

Ruth Langsford commented: ‘Congratulations love birds! SO happy for you both!’

Whilst Pussycat Dolls singer Ashley Roberts wrote: ‘Love to you and your family.’ 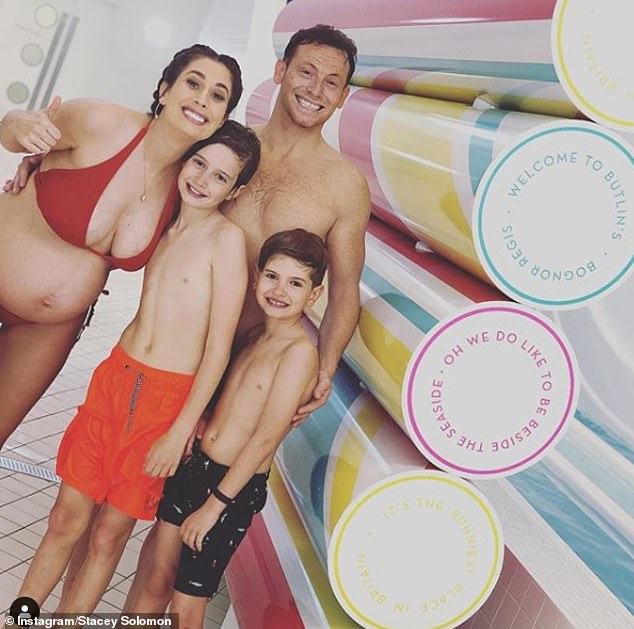 Growing family: Stacey and Joe began dating in 2015, and the couple delighted fans when they announced they were expecting a baby in February

Stacey and Joe, who is also father to Harry, 11, from a previous relationship, began dating in 2015, and the couple delighted fans when they announced they were expecting a baby in February.

The star recently admitted that she hasn’t ruled out using pain relief, as she doesn’t feel the same pressure of other mums to give birth naturally.

She explained to The Mirror: ‘I’ll maybe give gas and air a go but I’m such a control freak I’m super-scared of anything that makes me feel out of control.’

Stacey went onto say she’s ‘apprehensive’ of giving birth for a third time, adding: ‘I remember labour. I’m not one of those people who managed to forget it or block it out.’

While the TV personality had a speedy two-and-a-half hour labour with her second son Leighton, she struggled through a 72-hour ordeal with Zachary.

Stacey has also previously said it won’t be long before she returns to work after giving birth, provided that ‘all her children are happy,’ according to Hello! 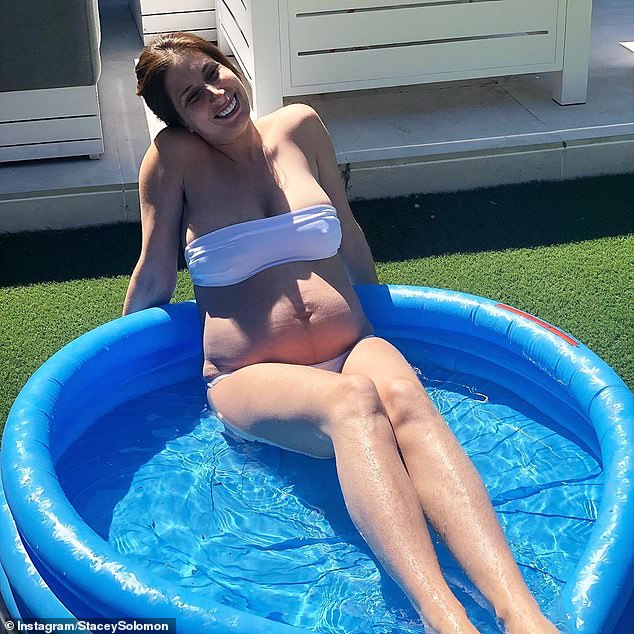 Keeping it secret: The couple have not disclosed the baby’s gender, or any further details about their new bundle of joy