National Express has launched a last-ditch effort to win over Stagecoach shareholders after its takeover was gatecrashed by a German investment group.

Stagecoach initially backed a merger with National Express in December but switched allegiance last week when DWS made a £595million cash offer.

The bidding battle for Stagecoach has pitted the transport group’s brother and sister founders against one another.

Analysts believe investors are likely to take DWS’s cash and run, especially as the Stagecoach board has unanimously backed the German infrastructure fund’s offer.

But National Express yesterday lashed out at DWS, branding it a private-equity vulture that would stop two well-known British transport companies forming a much more fruitful long-term partnership.

It comes after a slew of private equity takeovers of UK firms since the pandemic began, including the AA, Aggreko, Asda and Morrisons.

A National Express spokesman said: ‘In a period that has seen a surge of private-equity firms acquiring British companies, the combination represents a rare example of two UK-listed companies combining to form a global leader in their industry.’

DWS rejects this label, saying it is an infrastructure fund.

Its stable of investments includes Kelda, the owner of Yorkshire Water which is one of five firms under investigation by regulator Ofwat for allowing alarming amounts of sewage to seep into Britain’s rivers. 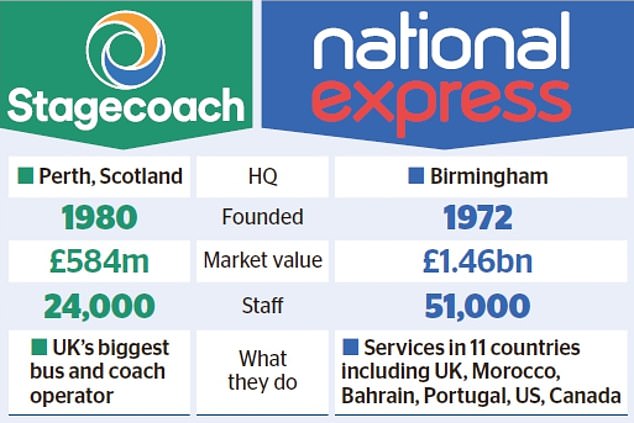 However, it has stopped short of sweetening its own offer, which would hand Stagecoach’s investors 25 per cent of the combined company.

The spokesman added that the merger would ‘provide Stagecoach shareholders with the opportunity to participate fully in the exciting future of the industry’ at a time when the Government is putting more emphasis on bus travel as the UK clamours to reach ambitious environmental targets.

Souter and Gloag have been gradually distancing themselves from Stagecoach over the past few years – though still own 15.5 per cent and 10.5 per cent of the group respectively.

They founded the Perth-based group in 1980 and grew it from a small operator to what is now the UK’s largest bus and coach company by taking advantage of the industry’s deregulation under Margaret Thatcher in 1986.

It joined the London Stock Exchange in 1993. After rail was privatised it was the first operator to open a service – but at times overstretched itself and has now exited the sector.

Souter and Gloag’s combined wealth is estimated to be £650million, according to The Sunday Times’ most recent Rich List, though this was down from £730million. 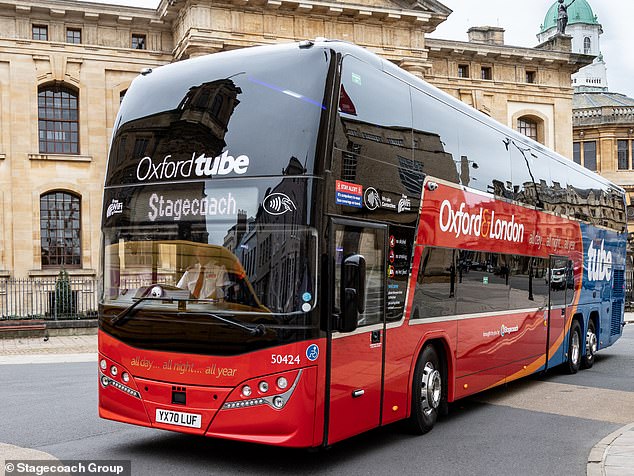 Stagecoach, which runs the popular Oxfordtube service, grew from a small operator to what is now the UK’s largest bus and coach company

Souter, a Scottish National Party supporter, has been a divisive figure who has at times drawn more attention for his personal politics than his business acumen.

The 67-year-old drew widespread criticism for his campaign against the repeal of a clause of the Local Government Act which prevented local authorities from ‘promoting homosexuality’, prompting allegations of homophobia.

Gloag, 79, who owns a castle near Inverness, was previously criticised for her handling of the closure of Kent International Airport.

When National Express and Stagecoach agreed their merger in December, Souter committed his shares to supporting the deal in a specific way that means he now cannot switch to support the DWS bid.

This means it is not clear if he would still support the National Express bid. Gloag had not made the same pledge, meaning she was free to support the DWS swoop on March 9, which she swiftly did.

Stagecoach’s largest shareholder Columbia Threadneedle has put out a statement saying it intends to support DWS, though this is not yet binding.

The consensus in the City is that National Express will be unsuccessful as shareholders will prefer DWS’s cash offer.

Brokers at Citigroup said last night: ‘We believe the founding [Souter] family’s preference is likely to be a cash deal, as they have previously announced the intention to sell down the stake in Stagecoach.’

But analysts at the investment bank added that ‘given the National Express footprint in the UK’, it is still likely to take part in another deal.

Julie Palmer, partner at Begbies Traynor, said: ‘One has to question where they will go next but with plenty of private-equity interest in the sector, they could soon find themselves a bid target, rather than a bidder.’