Stanhope Gardens: Husband was on bail when he allegedly stabbed wife

EXCLUSIVE: Husband filmed allegedly chasing his police officer wife down the street and stabbing her was on bail for domestic violence and stalking – and FOUR women had begged cops to keep him away from them

By Daniel Piotrowski and Charlotte Karp For Daily Mail Australia

The estranged husband accused of chasing his policewoman wife down the street and stabbing her was on bail for domestic violence offences at the time, a court heard.

Daily Mail Australia can reveal Simon Allan Davis, 48, will be sentenced next Monday on separate charges of stalking or intimidating, destroying or damaging property and breaching an apprehended violence order.

A magistrate in Sydney’s west formally revoked Davis’s bail for those charges on Tuesday afternoon, with the court hearing he had breached his agreement by ‘contacting witnesses.’

Police also hit Davis with apprehended violence orders on behalf of four women, including his wife Constable Tina Davis, one of her fellow police officers who was allegedly threatened during this week’s incident, another woman and a relative.

Constable Tina Davis, 46, was allegedly stabbed by her ex-husband in the neck about 8pm on Monday evening

The hearing came on the same afternoon that Davis was charged with wounding with intent to murder his 46-year-old wife about 8pm on Monday.

Police claim Ms Davis ran for her life through Stanhope Gardens in Sydney’s north-west after her husband allegedly knifed her. 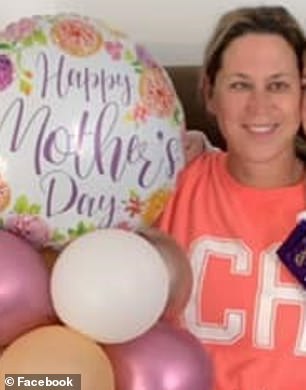 The couple reportedly separated earlier this year after more than two decades of marriage and three children.

Seven News reported that police believe Ms Davis had visited her husband to tell him their relationship was over for good.

Police said the husband had accused his wife of seeing other people and allegedly threatened to kill her when she refused to hand over her phone.

CCTV footage showed the woman sprinting from a parked car and Davis allegedly chasing after her.

Further video showed a man walking shirtless across the road towards nearby parkland before being pursued by police officers.

Neighbour Matt Forster told Seven News that he saw a man standing over a woman, who was lying on the ground.

‘As I approached he stabbed her two or three times in the shoulder area,’ he said. 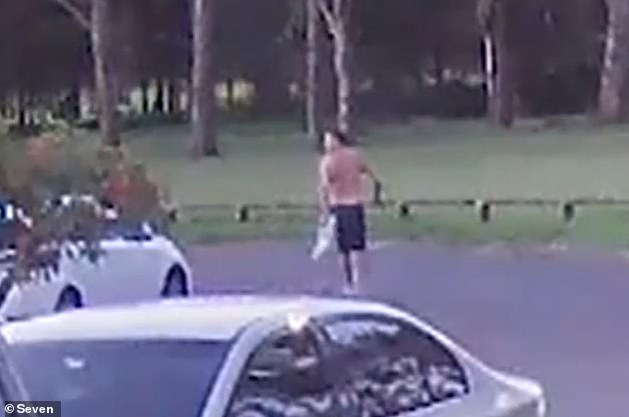 ‘Luckily I distracted him a touch she then was able to get onto all fours trying to get up.’

Davis allegedly stabbed himself before fleeing the scene.

The mother-of-three was treated for her injuries before she was taken to Westmead Hospital in a stable condition.

He was taken to the same hospital and placed under police guard before he was charged.

Davis is expected to come before the court again over the wound with intent to murder charge in a bedside hearing.