Star Trek: William Shatner is creating an AI version of himself to ‘preserve his memory and legacy’

William Shatner is boldly going where no man has gone before! Star Trek actor celebrates his 90th birthday by creating an AI version of himself to ‘preserve his memory and legacy for generations to come’

Star Trek’s William Shatner is creating an artificial intelligence-powered version of himself to ‘preserve his memory and legacy for generations to come’.

The actor will become the first person to have their life story captured by Los Angeles-based StoryFile’s conversational, interactive AI-powered video technology.

The system will let you interact directly with the recording, asking questions about Mr Shatner’s work and personal experiences, even after the man himself is gone.

The announcement today has been timed to coincide with Mr Shatner’s 90th birthday, with his StoryFile conversation available to view on devices from May.

Mr Shatner is famous for playing Captain James T. Kirk in the Star Trek franchise, alongside lead roles in the police drama T.J. Hooker and the dramady Boston Legal.

Star Trek’s William Shatner is creating an artificial intelligence-powered version of himself to ‘preserve his memory and legacy for generations to come’. Pictured: Mr Shatner recording his StoryFile Life conversation for posterity in the firm’s Los Angeles-based studio 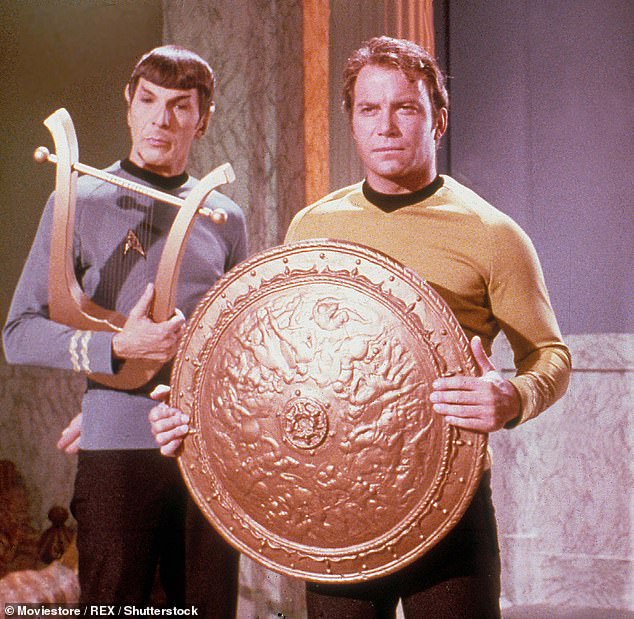 ‘I have a story to tell,’ said Mr Shatner.

‘Imagine if you could record yourself in a way that future generations, hundreds of years from now, could talk to you — and you could talk back. That’s possible.

‘With StoryFile, we can now be present in the future. Your authentic self, for all time.

‘That’s my gift to you down through time,’ he concluded.

HOW A STORYFILE COMES TO LIFE

Experts then process the footage, tagging clips and using it to train an artificial intelligence to provide responses to natural language questions.

This finished product is then uploaded to the StoryFile platform, where people may then have a ‘real-life’ conversation with the film of the individual.

According to the developers, StoryFile works with ‘all connected devices’ as well as 3D, augmented reality and virtual reality systems.

‘StoryFile captures the individual’s legacy in a way that no one else does by empowering them to pass on their values, struggles, life lessons, morals, decisions and more,’ the Los Angeles-based company said.

This, they added, comes ‘all while inspiring and delighting friends, family, and even future generations.’

‘William Shatner is going where no one has gone before,’ said StoryFile co-founder and CEO Heather Maio-Smith.

‘Generations in the future will be able to have a conversation with him. Not an avatar, not a deep fake, but with the real William Shatner answering their questions about his life and work,’ she continued.

‘This changes the trajectory of the future – of how we experience life today, and how we share those lessons and stories for generations to come.’ 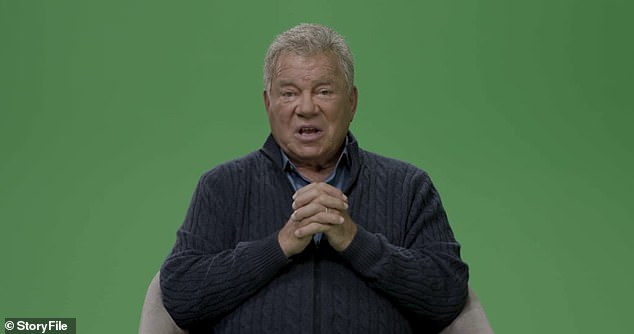 ‘Imagine if you could record yourself in a way that future generations, hundreds of years from now, could talk to you — and you could talk back. That’s possible,’ Mr Shatner, pictured, said 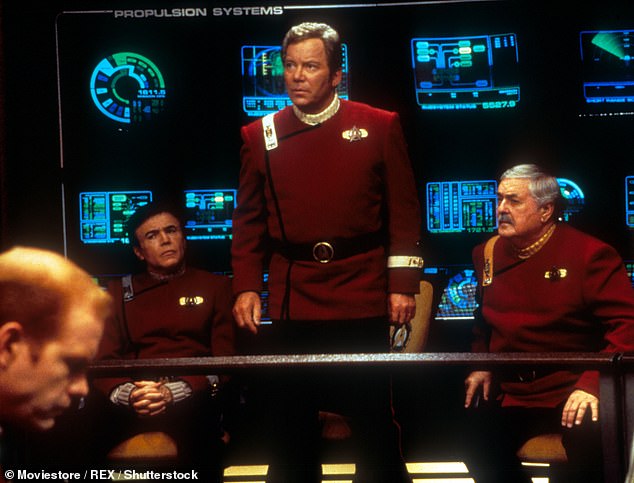 ‘Who better to show the world how StoryFile Life works than a man the world knows for stretching our imaginations about the future and life in this universe and beyond.’

‘A man who has always generously shared the highs and lows with us, and who has mastered the art of storytelling.’

Visitors to the StoryFile website can sign up to receive a notification when William Shatner’s conversation is live and ready to interact with.

HOW SOON WILL WE BE ABLE TO UPLOAD OUR MINDS TO A COMPUTER?

Brain and memory preservation has been explored at length by futurists, scientists and science fiction junkies alike.

Many say it falls under the category of ‘transhumanism.’

Transhumanism is the belief that the human body can evolve beyond its current form with the help of scientists and technology.

The practice of mind uploading has been promoted by many people, including Ray Kurzweil, Google’s director of engineering, who believes we will be able to upload our entire brains to computers by 2045.

Similar technologies have been depicted in science fiction dramas, ranging from Netflix’s Altered Carbon, to the popular series Black Mirror.

Another prominent futurist, Dr Michio Kaku, believes virtual reality can be used to keep our loved ones’ personalities and memories alive even after they die.

Scientists and futurists have different theories about how we might be able to preserve the human brain, ranging from uploading our memories to a computer to Nectome’s high-tech embalming process, which can keep it intact for thousands of years

‘Imagine being able to speak to your loved one after they die … it is possible if their personality has been downloaded onto a computer as an avatar,’ he explained.

These ideas haven’t been met without criticism.

McGill University Neuroscientist Michael Hendricks told MIT that these technologies are a ‘joke.’

‘I hope future people are appalled that in the 21st century, the richest and most comfortable people in history spent their money and resources trying to live forever on the backs of their descendants. I mean, it’s a joke, right? They are cartoon bad guys,’ he said.

Meanwhile, neuroscientist Miguel Nicolelis said recently that such technologies would be virtually impossible.

‘The brain is not computable and no engineering can reproduce it,’ he said.

‘You can have all the computer chips in the world and you won’t create a consciousness.’