Some scenes from the highly anticipated December movie Star Wars: The Rise of Skywalker were shared on Friday by LucasFilm.

Lucky attendees of Disney’s D23 Expo were the only ones able to see the footage, however.

According to /Films – which had access to the clip – the scenes included actors Daisy Ridley, Adam Driver, John Boyega and Oscar Isaac.

New look: Some scenes from the highly anticipated Star Wars: The Rise of Skywalker were shared on Friday by LucasFilm. Lucky attendees of Disney’s D23 Expo were the only ones able to see the footage, however (a still from the trailer)

The trailer already gave a good look at the movie: Rey is seen with, from left, Chewbacca, BB-8, C-3PO, Poe and Finn in the clip from earlier this year

Poe Dameron (Isaac) was seen repelling down from a ship in a crowded space dock, the site claimed. Also seen was Rey (Ridley) standing in the desert.

Finn (Boyega) is spotted ‘in a building or spaceship’ while Rey says, ‘It’s too dangerous’ in a voiceover.

Later, he faces Rey who tells him, ‘I have to go alone.’

The clip also featured footage of Kylo Ren (Driver) without his mask on.

He is in a white room as he focuses on Darth Vader’s helmet. There is also a mist around the helmet, suggesting Vader may make a return.

The film, which has already shared a first trailer, will be released in December.

This comes after director JJ Abrams told Vanity Fair in May that his special effects are so incredible that Carrie Fisher’s Leia Organa will be able to touch and interact with a character played by her daughter Billie Lourd. 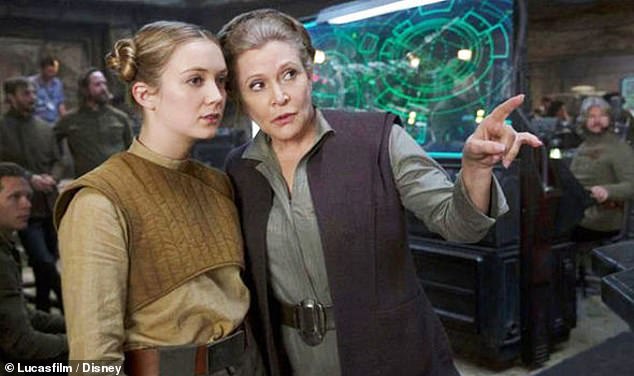 Back together: Carrie Fisher, right, will interact with her daughter Billie Lourd, left, in the next Star Wars movie, The Rise Of Skywalker, due out in December, JJ Abrams told Vanity Fair. Seen in The Force Awakens 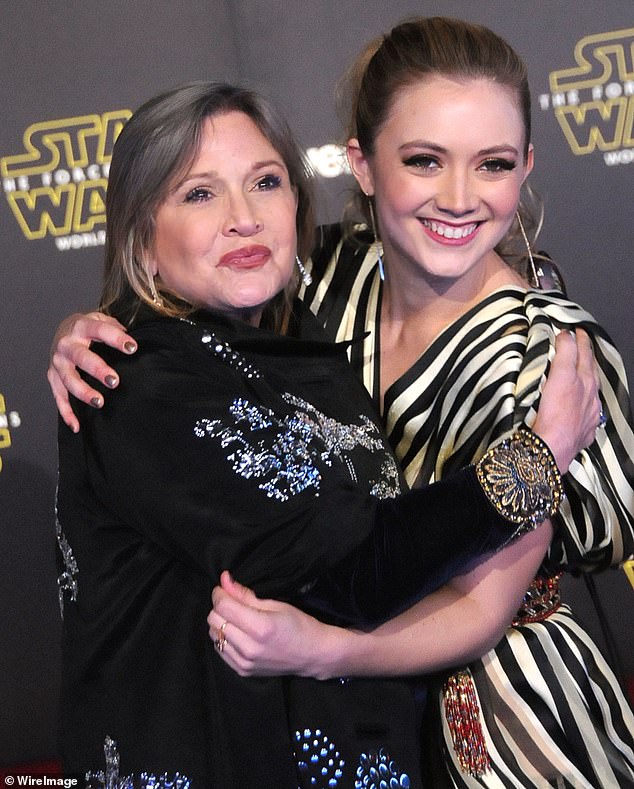 They are both back: The beauty seen here in 2015 in Hollywood with Billie 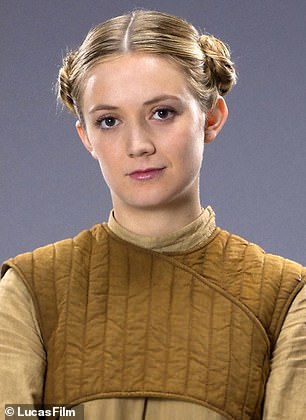 ‘There are moments in this movie where Carrie is there, and I really do feel there is an element of the uncanny, spiritual, you know, classic Carrie, that it would have happened this way, because somehow it worked.

‘And I never thought it would.’

He also explained how he figured out a way to include the Fisher.

‘It’s hard to even talk about it without sounding like I’m being some kind of cosmic spiritual goofball,’ Abrams said. 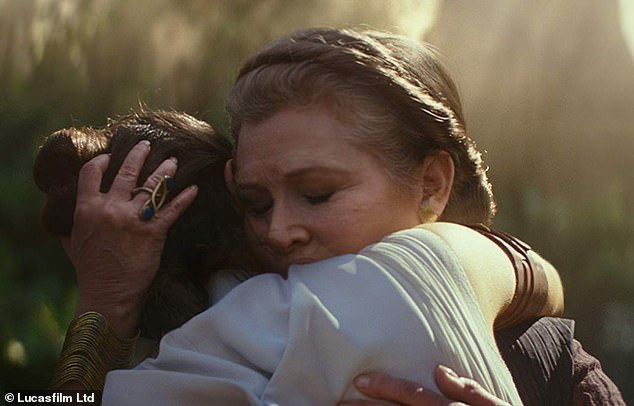 Here it is: In the Rise Of Skywalker trailer, Rey is seen hugging Leia. Old footage was carefully used with tweaked lighting 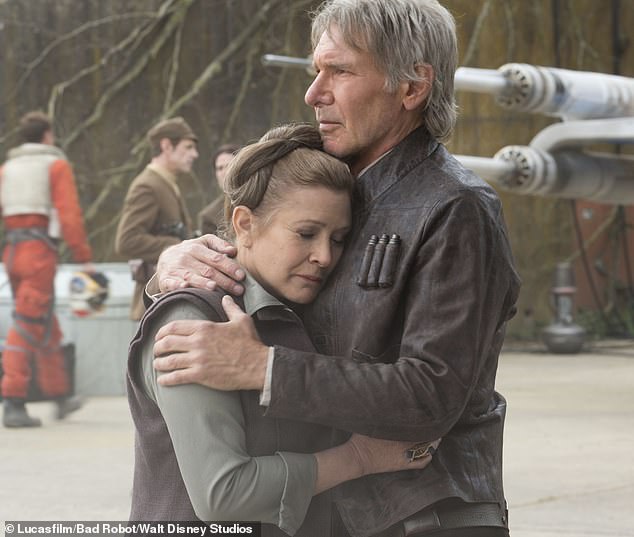 The way she was: Fisher is seen in 2015’s Force Awakens with Harrison Ford

And the lighting was tweaked just so to make the footage look right.

‘It was a bizarre kind of left side/right side of the brain sort of Venn diagram thing, of figuring out how to create the puzzle based on the pieces we had.’ 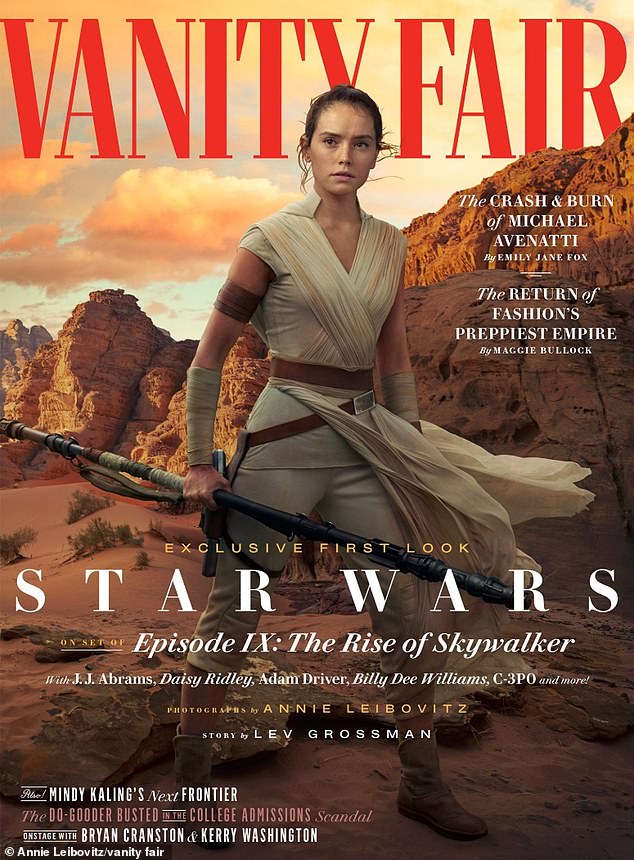 Abrams also touched on how daunting it was to bring the Skywalker story to a close after so much time.

‘That’s the challenge of this movie,’ Abrams says. ‘It wasn’t just to make one film that as a stand-alone experience would be thrilling, and scary, and emotional, and funny, but one that if you were to watch all nine of the films, you’d feel like, Well, of course— that!’

And there is so much baggage.

‘This trilogy is about this young generation, this new generation, having to deal with all the debt that has come before,’ he added.

‘And it’s the sins of the father, and it’s the wisdom and the accomplishments of those who did great things, but it’s also those who committed atrocities, and the idea that this group is up against this unspeakable evil and are they prepared? Are they ready?

‘What have they learned from before? It’s less about grandeur. It’s less about restoring an old age. It’s more about preserving a sense of freedom and not being one of the oppressed.

‘The idea of the movie is kind of how I felt going into the movie as a filmmaker which is to say that I’ve inherited all this stuff, great stuff, and good wisdom, and the good and the bad, and it’s all coming to this end, and the question is, do we have what it takes to succeed?’

He also talked about the look of his films and what inspired him. Abrams wanted more of the feel of the first three Star Wars films: New Hope, The Empire Strikes Back and Return Of The Jedi.

‘Famously, the prequels were mostly greenscreen environments,’ Abrams says. ‘And that was George himself doing that, and it ended up looking exactly how he wanted it to look—and I always preferred the look of the original movies, because I just remember when you’re in the snow on Hoth, when you’re in the desert on Tatooine, and when you’re in the forests of Endor—it’s amazing. If you put a vaporator here, there, all of a sudden almost any natural location suddenly becomes a location.’

The VF writer also was allowed to talk to some of the cast members.

Ridley, who plays Rey, had the most to say.

And she turned her attention to how Rey felt about Kylo.

‘I think there’s a part of Rey that’s like, dude, you f**king had it all, you had it all,’ Ridley says. ‘That was always a big question during filming: you had it all and you let it go.’

Kylo is the son of Han Solo and Princess Leia, but he ended up going to the dark side and worshiping Darth Vader, his late grandfather.

A source told VF that the connection between Rey and Kylo is deeper than anyone could have guessed which begs the question: are they related?

Many fans have claimed they are brother and sister.

Daisy also noted she loved the Skywalker trailer: ‘It’s nice having that shot at the beginning of the teaser, because I think it’s quite a good visual representation of where she is now: confident, calm, less fearful.… It’s still sort of overwhelming, but in a different way. It feels more right—less like inevitable and more like there’s a focus to the journey.’ 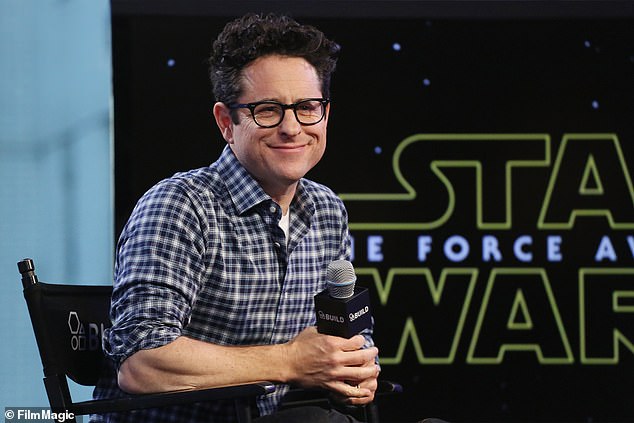 Tough jobL Abrams also touched on how daunting it was to bring the Skywalker story to a close after so much time. ‘That’s the challenge of this movie,’ Abrams says. ‘It wasn’t just to make one film that as a stand-alone experience would be thrilling, and scary, and emotional, and funny, but one that if you were to watch all nine of the films, you’d feel like, Well, of course— that!’ Seen in 2015

‘And then he had been forging this maybe-bond with Rey and it kind of ends with the question in the air: is he going to pursue that relationship, or when the door of her ship goes up, does that also close that camaraderie that they were maybe forming?’ he stated.

And Adam also talked about how there was too much pressure for Ben Solo which may have led to his demons.

It didn’t help that Han ditched him to go back to smuggling.

‘How do you form friendships out of that?’ Driver asked. ‘How do you understand the weight of that? And if there’s no one around you guiding you, or articulating things the right way … it can easily go awry.’

Billy Dee Williams, 82, is bringing back his character Lando Calrissian who was the charismatic friend who betrayed then helped Han Solo, played by Harrison Ford.

‘He’s a survivor. It’s expediency for him,’ Williams says.

‘You know, he was thrown into a situation which he didn’t look for and he had to try to figure out how to deal with an entity which is more than just a human.’ 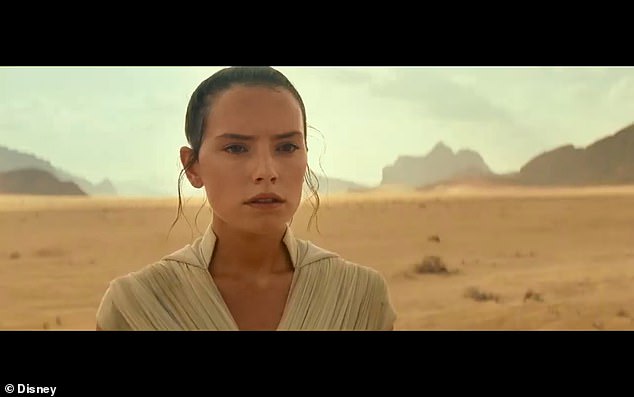 A first look: Daisy said she liked how the trailer opened as Rey came off as ‘strong’

John Boyega, who plays Finn, offered an update: ‘I think he’s just an active member of the Resistance now. Episode Eight, he couldn’t decide what team he was fighting for. But since then he’s made a clear decision.’

Oscar Isaac, who plays Poe Dameron, added some more information about his character: ‘There has been a bit of shared history that you haven’t seen. Whereas in the other films, Poe is this kind of lone wolf, now he’s really part of a group. They’re going out and going on missions and have a much more familiar dynamic now.’

Anthony Daniels, who plays C-3P0, said he loved the Rise Of Skywalker script.

But he grappled with a line.

A bit of the past comes back: Poe, Finn and Rey look at part of the blown up Death Star 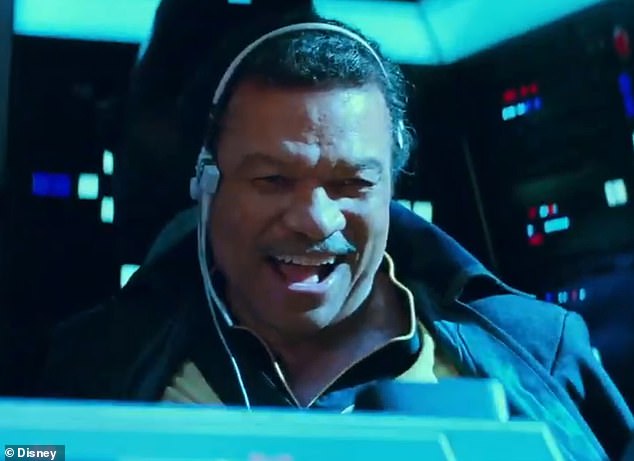 Back for fun: Billy Dee Williams, 82, is bringing back his character Lando Calrissian who was the charismatic friend who betrayed then helped Han Solo, played by Harrison Ford. ‘He’s a survivor. It’s expediency for him,’ Williams says

Joonas Suotamo, who plays Chewbacca, took over from Peter Nayhew who died in April.

‘When I first met [Mayhew] he told me I was a wee bit too skinny,’ Suotamo says. ‘But we also had a Wookiee boot camp, which lasted for a week. He told me all kinds of things about the moves that Chewbacca does, how they came to be and his reasoning behind them.’

He added, ‘It’s very much like silent-era film, with Buster Keaton and Charlie Chaplin. He’s a mime character and that’s what he does, and I guess in that minimalism comes the beauty of the character.’

‘There’s the kind of spectacular-ness, and the supernatural move-things-with-your-mind magic stuff, but then there’s also this really grounded, rugged nature where everything is distressed and old and kind of worn out and lived-in. And I think playing with those two ideas means that you get this feeling that it could almost be real. Like, in a galaxy far away, it could almost be the case that you could have this.’

The way they were: Carrie with Chewbacca, C-3PO and Han Solo in The Empire Strikes Back

The Rise of Skywalker introduces some new characters: there is a one-wheeled droid called D-O, the alien Klaud, Keri as Zorri Bliss, and Richard E Grant as Allegiant General Pryde.

‘I think there is a larger expectation that Disney has,’ Kennedy says. ‘On the other hand, though, I think that Disney is very respectful of what this is, and right from the beginning we talked about the fragility of this form of storytelling. Because it’s something that means so much to fans that you can’t turn this into some kind of factory approach. You can’t even do what Marvel does, necessarily, where you pick characters and build new franchises around those characters. This needs to evolve differently.’

Star Wars: Rise Of Skywalker will be released in US theaters on December 20, 2019.