‘I just called 13 different Starbucks to find these’: Twitter users go wild for the coffee chain’s new color-changing cups, as the reusable drinkware flies off shelves in the US and Canada

This month, the chain began selling packs of five 24-ounce reusable cups in select stores in the US and Canada, and they quickly began flying off the shelves.

Now social media users are sharing their excitement over snagging the coveted coffee cups — and extreme disappointment when they can’t find them. 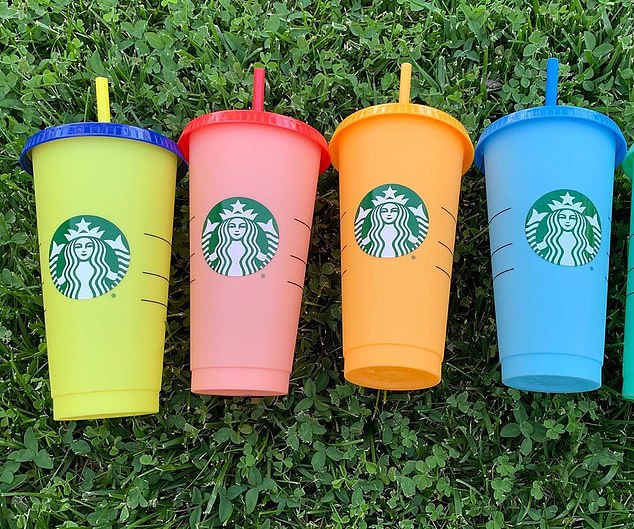 Limited access: They are available in both the US and Canada 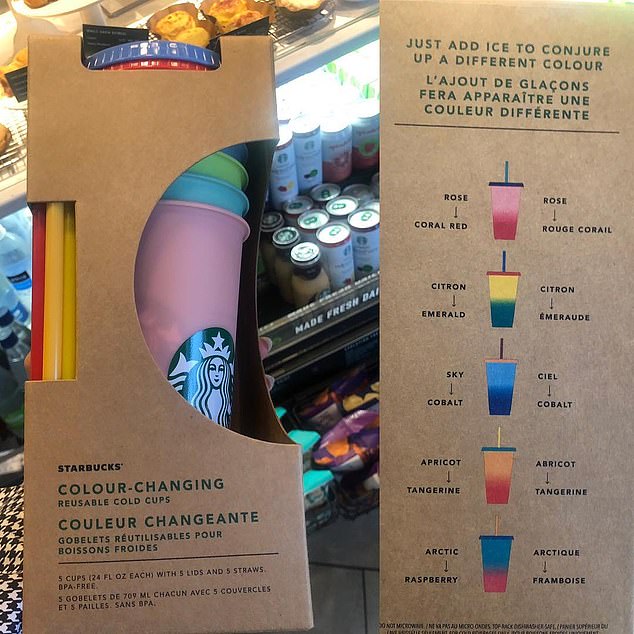 Freeze ’em: The cups change color when ice or cold liquid is added

Each package includes five cups with matching lids and usable straws. They change from pink to red, yellow to green, light to dark blue,light to dark orange, and turquoise to magenta.

According to the label, adding ice to the cup will change the color, making them ideal for cold coffee drinks.

As photos of the cups started popping up online, they quickly earned more and more attention — and became more and more scarce in stores.

‘Not to be dramatic, but if I can’t find a set of @Starbucks color changing cups, I might die,’ wrote one Twitter user. 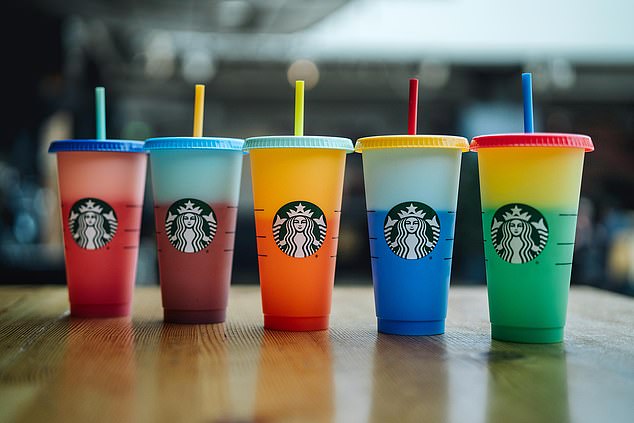 Must-have! The pretty cups have captured the attention of customers 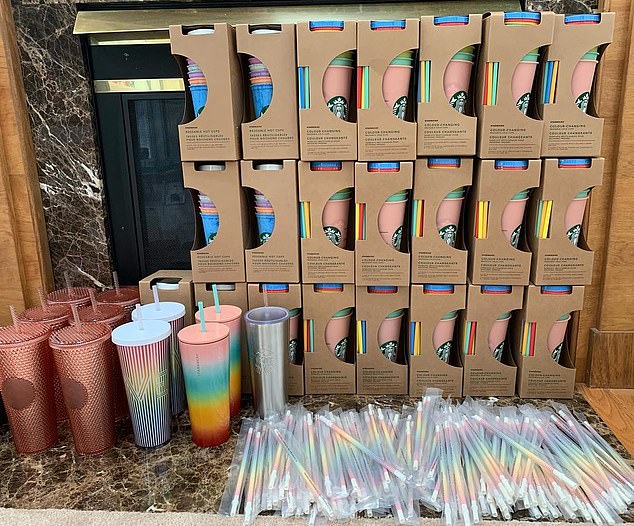 So pretty! They come in sets of five and have matching lids and straws 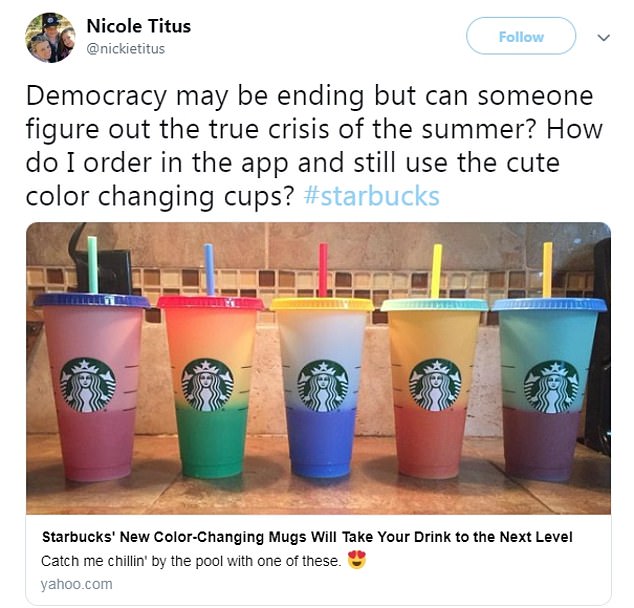 Going, going, gone! The cups are quickly selling out in stores

Oh no! Shoppers who haven’t been able to get their hands on them are freaking out

‘Democracy may be ending but can someone figure out the true crisis of the summer? How do I order in the app and still use the cute color changing cups?’ asked another.

Dozens have taken to Twitter to share the great lengths they’ve gone to in order to get their hands on one.

‘Some b*** es are really calling like 8 different starbucks to ask for the color changing cups. it’s me. i’m b****es,’ one jokes.

‘My dad found the color changing Starbucks cups for me!!!!! Yaaasssssss!! He had to go to 5 different locations, but it was worth it,’ said a grateful daughter.

‘I just called 13 different Starbucks to find these color changing cups and now I’m driving 45 minutes away cause I finally found a store that had them,’ tweeted another person.

Ring ring! Several have admitted to calling up several different stores in search of the cups

Over it: At least one Starbucks employee is getting right to the point when she answers the phone

What a good dad! This lucky lady’s dad tracked one down after going to five stores

Rude! Some people are taking advantage and reselling them for a profit on eBay 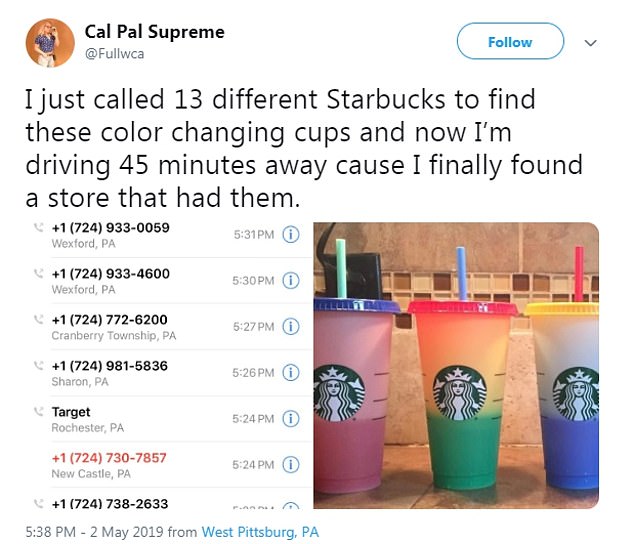 Going the distance: Some people are traveling far away to get the special cups 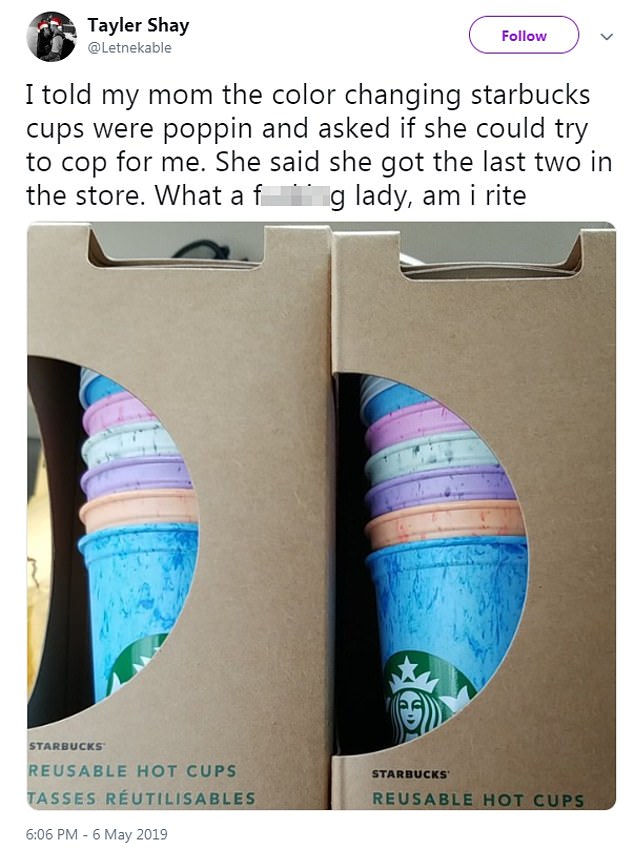 More to buy: There also appears to be a hot version of the cups

Woohoo! Those who have managed to get them are celebrating on social media

Wait for it: Starbucks tweeted that stores selling the cups will be ‘restocking very limited quantities soon’

It seems that even baristas are feeling the heat, and are preemptively warning people when they’ve sold out.

The pack of cups, which sells for $16.95, has even started popping up on eBay for up to $100 each. And that’s not just sellers with high hopes, either: Bids have reached more than $75 on several listings.