Stargazers could enjoy the best meteor shower of 2022 NEXT WEEK

One of the ‘best meteor showers of the year’ will peak next week, when the Quadrantids will send up to 50 shooting stars per hour streaking across the sky.

This is the first meteor shower of 2022, and will peak on January 3 at about 20:40 GMT, appearing to emanate in the constellation Bootes, near the Big Dipper.

Quadrantids are especially known for their bright ‘fireball’ meteors that leave large explosions of light and colour that persist longer than average meteor streaks.

Unlike most meteor showers, which originate from debris left behind by comets, the Quandrantids come from asteroid 2003 EH1, which may be a ‘dead comet’.

To get the best out of the shower, and see as many shooting stars as possible, you’ll need to find a dark sky area, with minimal light pollution and a clear horizon, according to NASA, which says ‘they are visible throughout the night sky.’

Quadrantids over in the Great Khingan Mountains in northeast China’s Heilongjiang province, January 4, 2019

WHAT ARE THE QUADRANTIDS?

The Quadrantids, which peak during early-January each year, are considered to be one of the best annual meteor showers.

Most meteor showers have a two day peak, which makes catching sight of these other meteors more possible.

The Quadrantids peak, on the other hand, is much shorter at a few hours.

The reason the peak is so short is due to the shower’s thin stream of particles and the fact that the Earth crosses the stream at a perpendicular angle.

During its peak, 60 to as many as 200 Quadrantid meteors can be seen per hour under perfect conditions.

Quadrantids are also known for their bright fireball meteors.

Fireballs are larger explosions of light and colour that can persist longer than an average meteor streak.

The name comes from Quadrans Muralis, which is a former constellation created in 1795 by the French astronomer Jérôme Lalande that included portions of Boötes and Draco, but has since fallen out of use.

They peak from late December into very early January each year, and unlike other meteor showers which have a two-day peak, these last just a few hours.

‘The reason the peak is so short is due to the shower’s thin stream of particles and the fact that the Earth crosses the stream at a perpendicular angle,’ NASA said.

At an extreme up to 200 shooting stars can be seen per hour, but that relies on perfect conditions in the ideal spot on Earth. For the UK we’ll see about 50.

Meteors are the result of small particles entering the Earth’s atmosphere at high speed, typically around 90,000 mph for the Quadrantids.

The pieces of debris heat up due to friction with the air, and are usually destroyed in under a second at altitudes above 50 miles.

The superheated air around the meteor glows briefly, and is visible from the ground as a streak of light known as a ‘shooting star’.

Quadrantids are best viewed during the night and predawn hours from the Northern Hemisphere, and the best way to view them is on a clear night.

There are between six and ten ‘sporadic’ meteors per night throughout the year, but during a ‘meteor shower’ this increases dramatically.

‘During a shower, the Earth passes through a cloud of debris left behind by comets and asteroids, and so many more meteors are seen entering the atmosphere,’ according to the Royal Astronomical Society.

The Quadrantids are associated with the near-Earth asteroid (196256) 2003 EH1, which may be an extinct comet seen by Chinese astronomers in 1490.

This year the shower peak is predicted to be at 20:40 GMT on 3 January, dropping off by about 50 per cent just two hours later.

‘This time the Moon will be just past New, so will its light will not interfere with the view and there will be a real benefit from watching the meteor shower under dark skies away from the lights of towns and cities,’ the Royal Astronomical Society said. 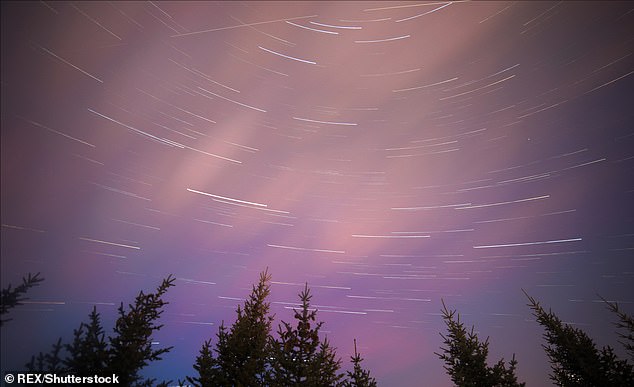 ‘Unlike many astronomical events, meteor showers are easy to watch and no special equipment is needed.

‘A meteor shower is best observed with the naked eye, and a reclining chair, a warm blanket and a hot drink make viewing much more comfortable on a cold January night.’

The easiest way to find the shower is to look north for the Big Dipper – the distinctive group of seven bright stars and a useful navigation tool.

Then follow the ‘arc’ of the Big Dipper’s handle across the sky to the red giant star Arcturus – this anchors the bottom of the constellation Bootes, where the meteor shower will appear.