Tuesday night’s Hand in Hand: A Benefit for Hurricane Harvey Relief kicked off with a call to unity and for an awareness of global warming.

Stevie Wonder offered a prayer saying love conquers division and asking that those who deny global warming would wake up and open their eyes.

He then launched into the song Lean On Me with a gospel choir performing back up.

Heavy hitters: Cher and George Clooney were among the many stars who took part in the Hand In Hand hurricane relief telethon Tuesday night to help the victims of Harvey and Irma 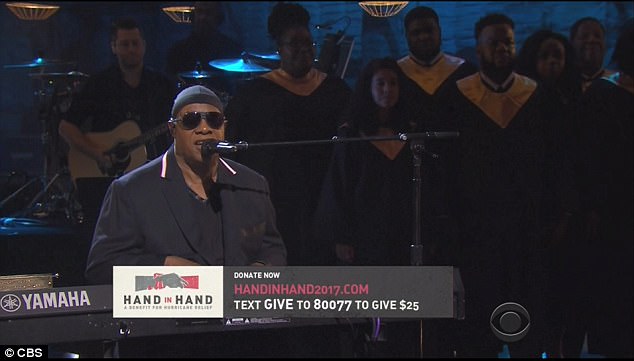 TV benefit: Stevie Wonder kicked off the one-hour special that aired on all the negtworks as well as on cable and online with a rendition of Lean On Me with a gospel choir 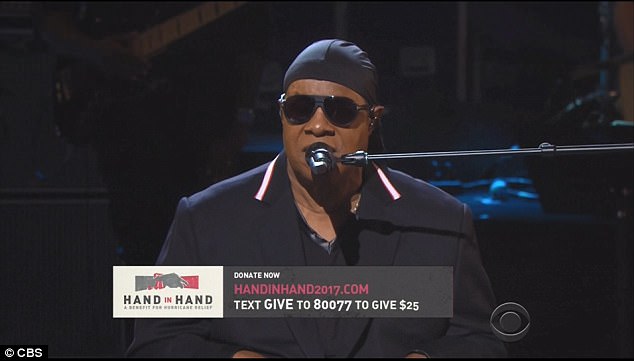 Had a message: He offered up a prayer for unity and asked that those who deny climate change would ‘open their eyes’

Beyonce, in a recorded message, offered that racial divisions, skin color and gender differences all disappear as people come together to help one another.

She also warned that climate change and its impacts on the world is real.

‘Tonight we come together in a collective effort to raise our voices, heal our communities, lift out spirits and heal,’ Beyonce said. 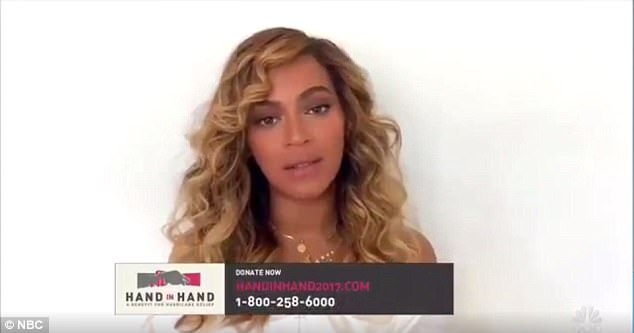 Hopeful: Beyonce, in a recorded message, offered that racial divisions, skin color and gender differences all disappear as people come together to help one another 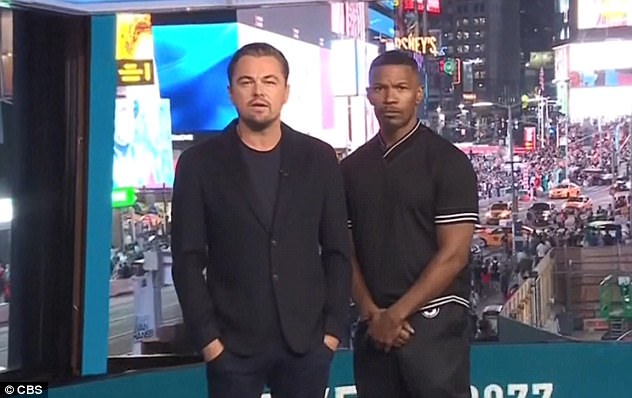 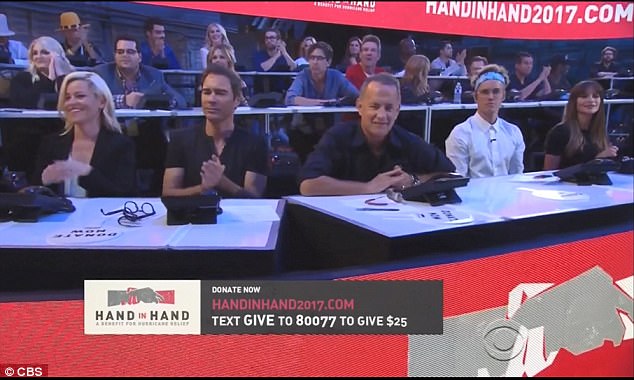 Celebrity volunteers: Behind the scenes stars like Eric McCormack, Tom Hanks and Justin Bieber who were ready to answer phones and take calls 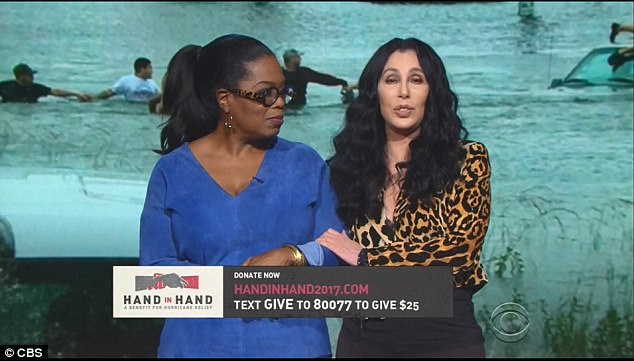 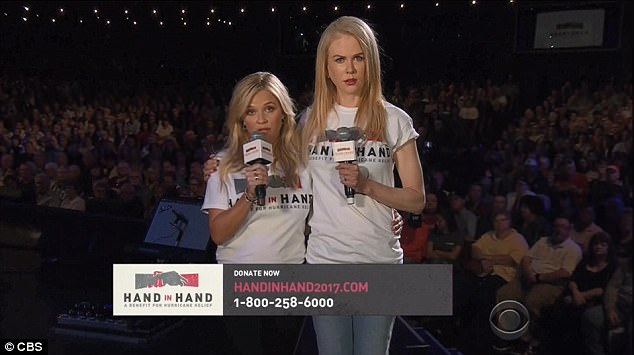 The one-hour special telethon seeks to raise money to help the victims of Hurricane Harvey in Texas and Hurricane Irma in Florida and many of the biggest stars in movies, music and television are taking part.

As the music played, the camera panned the bunch of stars waiting to take phone calls from people wanting to donate to the charities handpicked to benefit from the night’s efforts.

Julia Roberts and George Clooney sat next to each to her close to Stephen Colbert who was rubbing shoulders with Barbra Streisand. 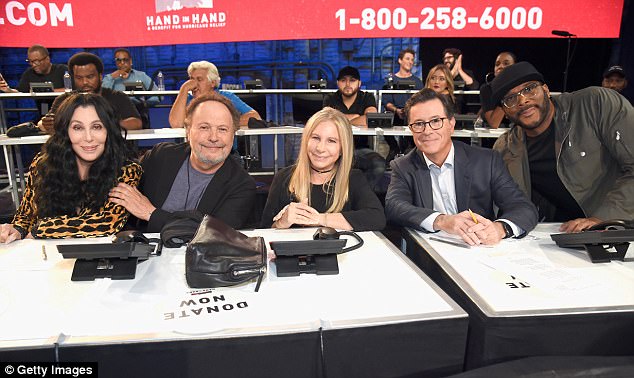 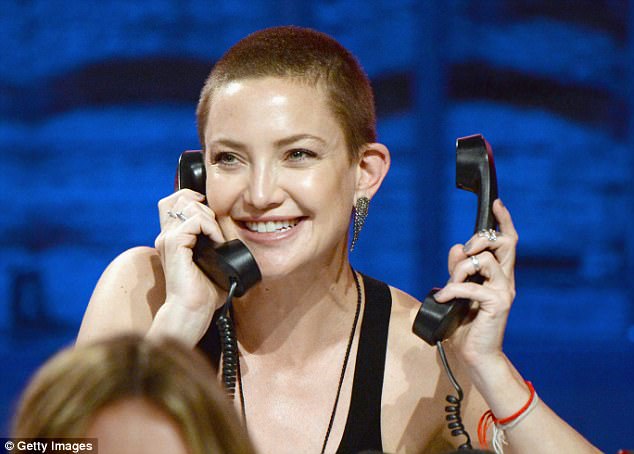 Leonardo DiCaprio and Jamie Foxx then explained what the evening was about.

‘We’re here to raise money and lift some spirits,’ said Foxx. ‘When tough times hit this is who we are …. when we join together hand in hand.’

‘Let’s help lift victims out of the darkness,’ DiCaprio urged. 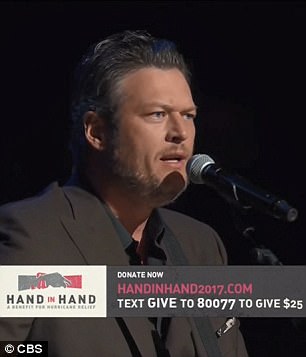 Blake Shelton and Usher did a duet of Stand By Me 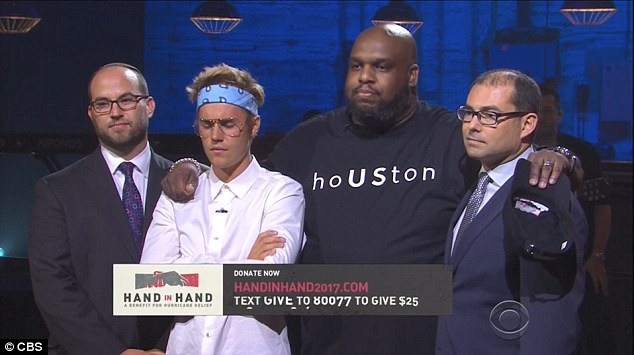 Oprah Winfrey and Cher, followed by Reese Witherspoon with Nicole Kidman, recounted horrific and tragic tales from the hurricane in Texas.

Usher and Blake Shelton then performed the hit Stand By Me together.

The special continued with a mix of live musical performances and tales of heartbreak from the communities most deeply affected by the hurricanes.

The Rock spoke about how his family had survived Hurricane Andrew that hit Florida in 1992, and said any donation, no matter how small, would make a difference.

Will Smith spoke of the heroism of those who went to the aid of others when the hurricanes hit.

‘In recent days, we’ve witnessed all kinds of American champions across our nation standing together hand in hand and facing down real danger,’ Smith said.

‘These American heroes have saved lives and restored faith in so many ways.’ 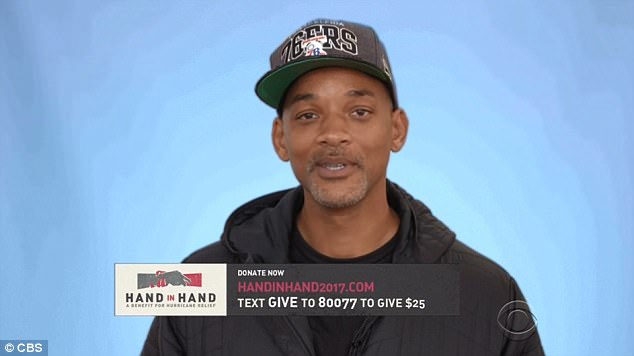 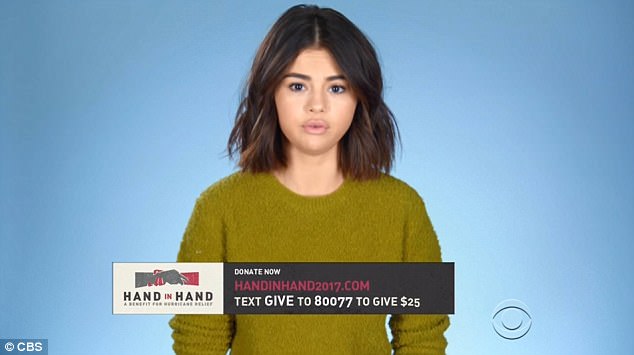 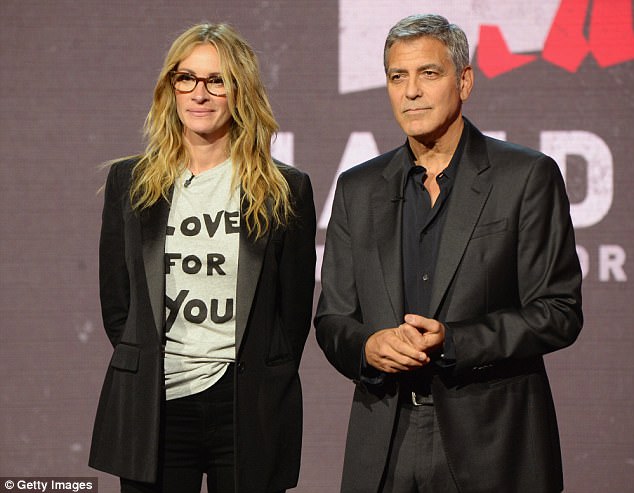 ‘There are those who say we are a nation divided,’ De Niro said.

But, Stewart added: ‘We’re sure of who we are and what matters – to help those in need and who we’ve never met.’

Harking back to the 16th anniversary of 9/11 on Monday, DeNiro recalled: ‘We showed the world the enduring values that define us as a people.’

The telethon aired live on the East Coast from 8 to 9 p.m. on all the main networks plus some cable channels, Twitter, YouTube and social media networks. It will be repeated on the West Coast.

Celebrities joined in and performed live from New York Los Angeles and Nashville with a special finale from Texas.