Stars from the noughties are using festive movies for their comeback

In the age of Netflix, cosying up in front of a Christmas romcom is as much a festive tradition as enjoying a steaming cup of eggnog or decking the halls with boughs of holly.

Since the streaming platform has begun producing festive original flicks such as the Christmas Prince or The Princess Switch, millions have tuned in to swoon over the easy-watching holiday romances they have on offer, and celebrities have taken note.

Long gone are the days where only debuting or struggling actors would  take a starring role in these joyful yet somewhat predictable holiday specials.

Instead, like ghosts of movies’ past, celebs who saw their star power dim ever so slightly since their heydays in the 90s and noughties are turning to these festive low-budget productions to breath new life into their careers.

This year will see Freddie Prinze Jr, who rose to fame in the beloved 90s romcom She’s All That, star in Netflix’s Christmas With You, set to be released on 17 November.

Meanwhile, Falling For Christmas, which was released last week, starred Lindsay Lohan, who reigned supreme as the most popular teen movie star of the 2000s, before a slew of drunk driving tickets and intoxicated nights out dampened her rising star.

Speaking to Femail, branding and culture expert Nick Ede explained why Netflix is turning to these stars for their Christmas products, and why the likes of Lohan, Prinze JR and even Brooke Shields are taking the bait.

90s stars are using Netflix Christmas movies to find new fans. This year will see Freddie Prinze Jr, who rose to fame in the beloved 90s romcom She’s All That, star in Netflix’s Christmas With You, set to be released on 17 November 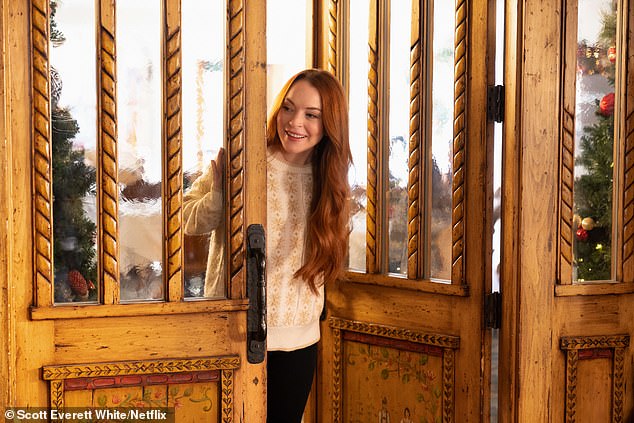 Lindsay Lohan will also star in Falling For Christmas, a sweet-spirited romcom where she’ll play a demanding heiress suffering from amnesia 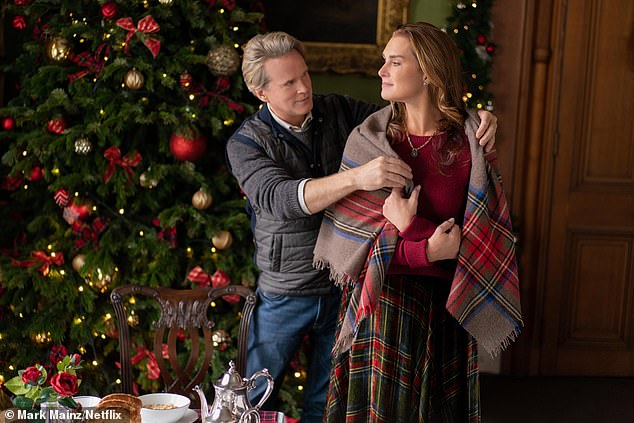 Nick said: ‘Netflix has cleverly jumped on this bandwagon to bring stars that have nostalgia value like Lindsay Lohan and Freddie Prinze Jr to mainstream once again.

‘This clever way of replicating the Hallmark made-for-TV model is a great way of engaging a new audience and also creating easy Christmas classics that can be watched over and over again.

‘With stars like Lindsay Lohan, Chord Overstreet, Aimee Garcia, Freddie Prinze Jr, and Justin Hartley we feel like we are in good hands. They are not mega stars but they have the quality that lends itself to a film that will be fun and frivolous and perfect for the festive season,’ Nick added.

And while some stars might balk at the idea of starring in a made-for-TV low budget film, but Nick said that the demand for Christmas movie is such that ‘these stars know that appearing in these films will be good for their profiles.’ 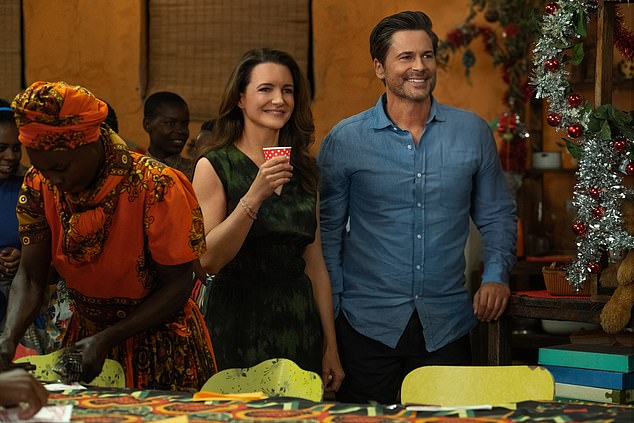 Kristin Davis starred in Holiday in The Wild alongside Rob Lowe, who played her romantic interest in 2019 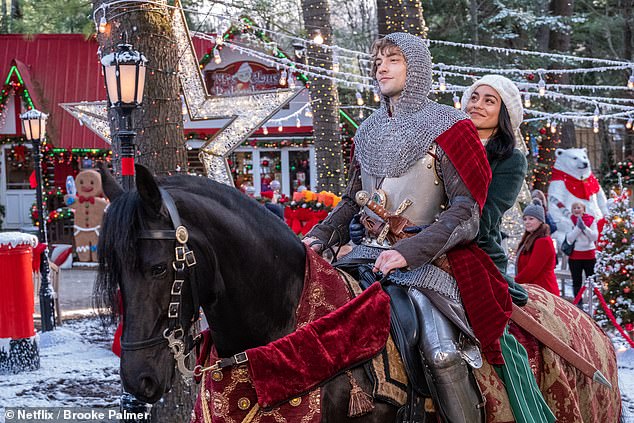 Vanessa Hudgens has enjoyed a lucrative contract with Netflix and has starred in four of their  Christmas movies between 2019 and 2021, including The knight Before Christmas, pictured 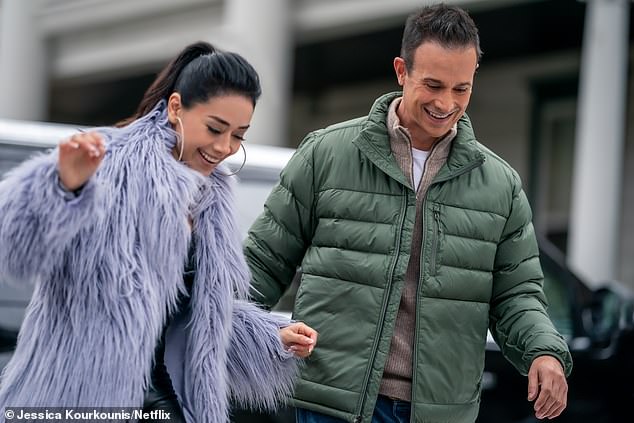 ‘The nostalgia element makes them relevant for today and they also know that being seen by millions on streamers will build their own brand equity,’ he said.

‘Either they will get more work or they will booked to do more Xmas films like the hallmark stars which is now extremely lucrative,’ he added.

Freddie Prinze Jr. returned to his romcom roots in the first trailer for new festive Netflix film, Christmas With You. 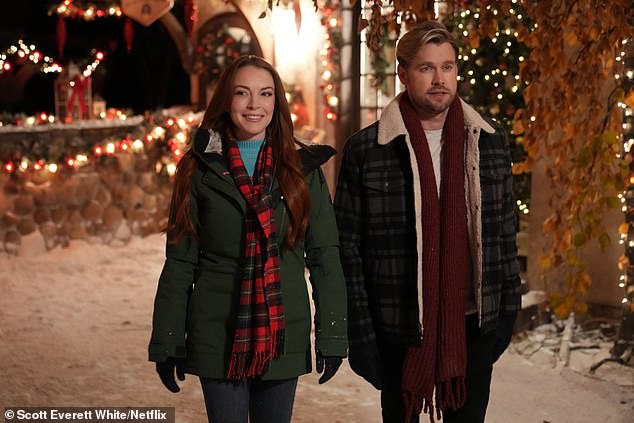 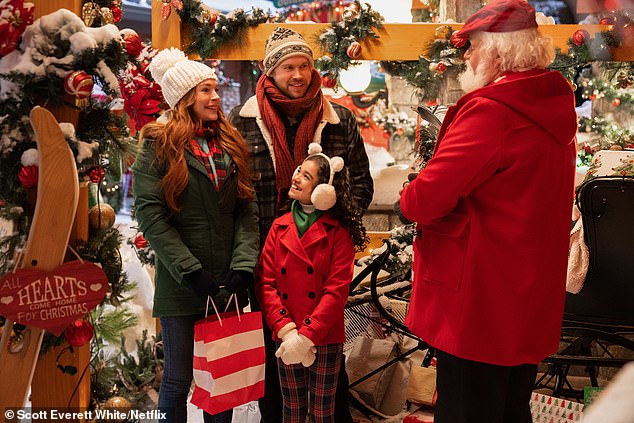 Lohan plays an heiress who meets a lonesome widower in the Christmas movie, which was released last week

Prinze Jr., 46, who shot to fame in 90s classics including She’s All That, stars alongside Aimee Garcia in the film, which tells the tale of pop star Angelina who escapes from her daily life to grant a young fan’s wish in small-town New York.

Christmas With You is the star’s second appearance in a feature-length film this year, after Clerks II – but before that, he hadn’t appeared in a movie since the 2012 television film Happy Valley.

Ladies’ Night director Gabriela Tagliavini directed the movie which is set for release on Netflix November 17.

Meanwhile, the announcement that Lindsay Lohan would be starring in her own Christmas movie caused a stir in October.

The former child actress is starring alongside Chord Overstreet, 33, in the romantic comedy about an heiress named Sierra who falls for a widower. The movie is coming out on Netflix on November 10.

Lindsay told Tudum, ‘It’s such a refreshing, heartwarming romantic comedy and I miss doing those kinds of movies.’

Last year, 1990s star Brook Shields was one of the familiar faces starring in one of Netflix’s festive flicks.

She was the heart of A Castle For Christmas, which told the story of Sophie Brown, a bestselling author who hits a snag in her career and decides to take a journey to Scotland, where she falls in love with a castle up for sale. 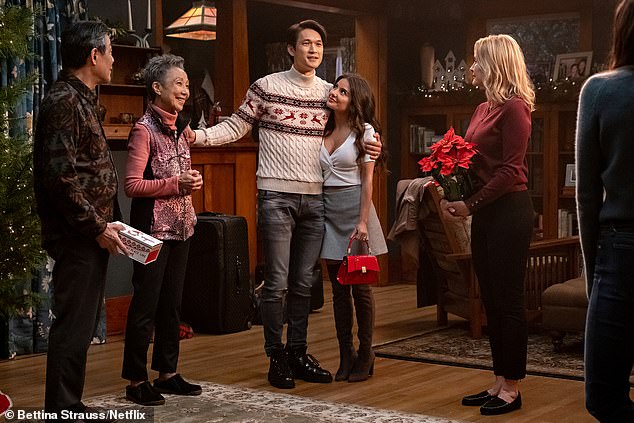 Nina Dobrev starred in the Christmas comedy Love Hard, the title of which was inspired by Love, Actually and Die Hard 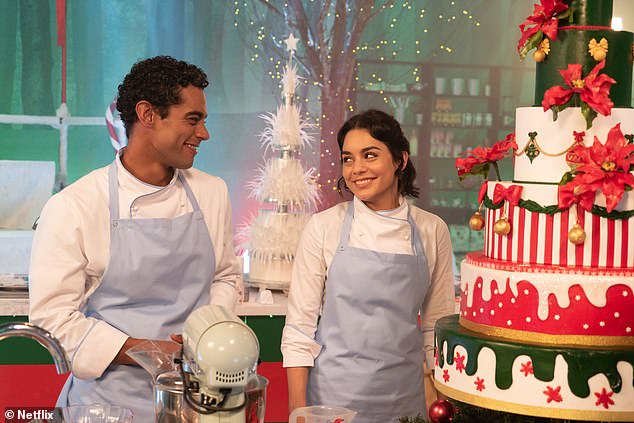 Vanessa Hudgens also starred in the Princess Switch in 2019, which was followed up a sequel in 2020 and another sequel in 2021

And it turns out that not only does she have family ties to the castle, its owner is a grumpy duke (Cary Elwes) who has no intention of selling it.

And High School Musical alumna Vanessa Hudgens gave her career a breath of fresh air thanks to a lengthy collaboration with Netflix which saw her star in their festive films three years in a row, thanks to her role in the Christmas romcom The Princess Switch, where she plays not just one, but two main characters.

Hudgens has also starred in Netflix’s The Knight Before Christmas in 2019, the same year were Sex and the City star Kristin Davis played Rob Lowe’s love interest in Holiday in the Wild.

And Nina Dobrev fans were excited to see her play in Love Hard, a romcom with a catfishing twist that was released last Christmas, and played on the themes of Love, Actually and Die Hard.