It’s long been known as a favourite party spot for both ordinary Britons alongside glamorous celebrities – and the world’s influencers are returning to the island in force with their Instagram accounts at the ready.

But since the coronavirus pandemic set in, the Spanish island of Ibiza has been largely free of tourists and sun-seekers.

Even though lockdown measures were partially eased across Spain last month, Ibiza’s clubs, including famous names such as Amnesia and Privilege, are set to remain shut for at least the rest of the year.

Lockdown measures have also been reimposed in parts of neighbouring island Majorca, the home of party resort Magaluf.

The resort’s famous Punta Ballena strip has been shut down after riotous scenes emerged of British tourists jumping on cars. Two other party strips in Playa de Palma, south-east of the Majorcan capital Palma, have also been closed.

But despite the closures and an absence of bustling night spots which would ordinarily draw thousands of Britons this summer, celebrities and reality TV stars have still flocked to Spain.

In glamorous snaps which make it appear as though the summer of 2020 is just like any other, they are seen posing with ice cold drinks by the pool at luxury hotels, wearing figure-hugging dresses in front of a blue sea backdrop, or getting ready for an expensive meal out.

The likes of Love Island couple Molly-Mae Hague and Tommy Fury are in Ibiza, along with other stars including I’m A Celebrity… Get Me Out Of Here winner Jacqueline Jossa and Geordie Shore’s Holly Hagan.

But with the clubs closed they are restricted to socially-distanced dinners, trips to the beach and there are precious few other guests at visible at the luxury hotels they are staying at.

Even though lockdown measures were partially eased across Spain last month, Ibiza’s clubs, including famous names such as Amnesia and Privilege, are set to remain shut for at least the rest of the year. Pictured: A deserted Amnesia pictured earlier this week

Molly-Mae and her partner Tommy were seen taking advantage of a much quieter Ibiza in care-free photos on each other’s Instagram accounts.

In various snaps, Molly-Mae, who is staying at Ibiza’s exclusive Hotel Nobu, showed off her toned figure as she relaxed outside or dressed up to go out for dinner.

Tommy was also seen in a beach snap, which he captioned ‘Summers back on track’.

Former Eastenders’ actress Jacqueline Jossa is also in Ibiza to show off a new fashion range and also to make the most of the incredible summer weather.

She was seen showing off her summer dresses and also having fun with The Only Way Is Essex star Billie Faiers and Charlotte Crosby. 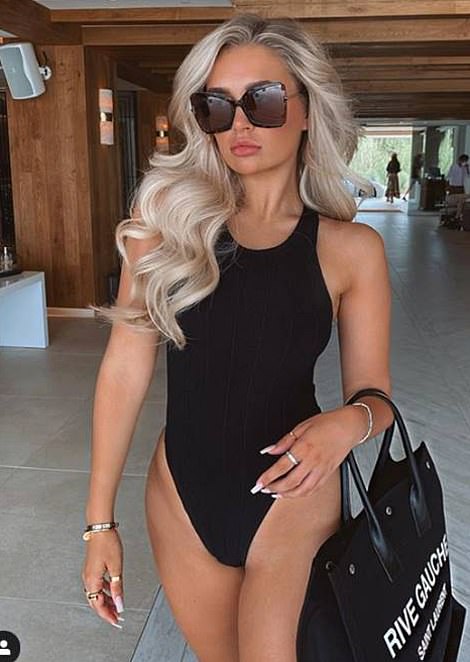 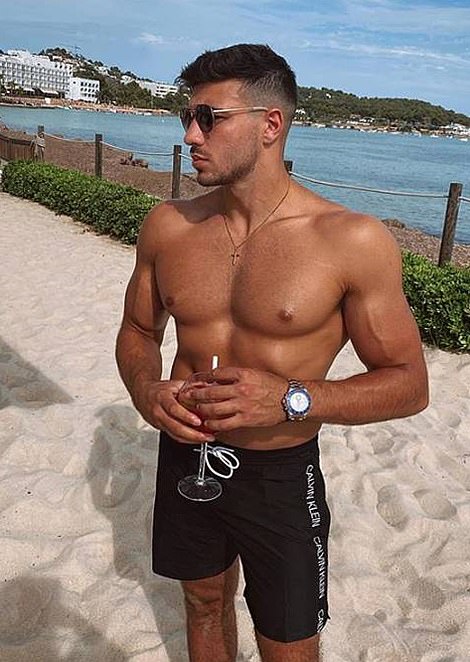 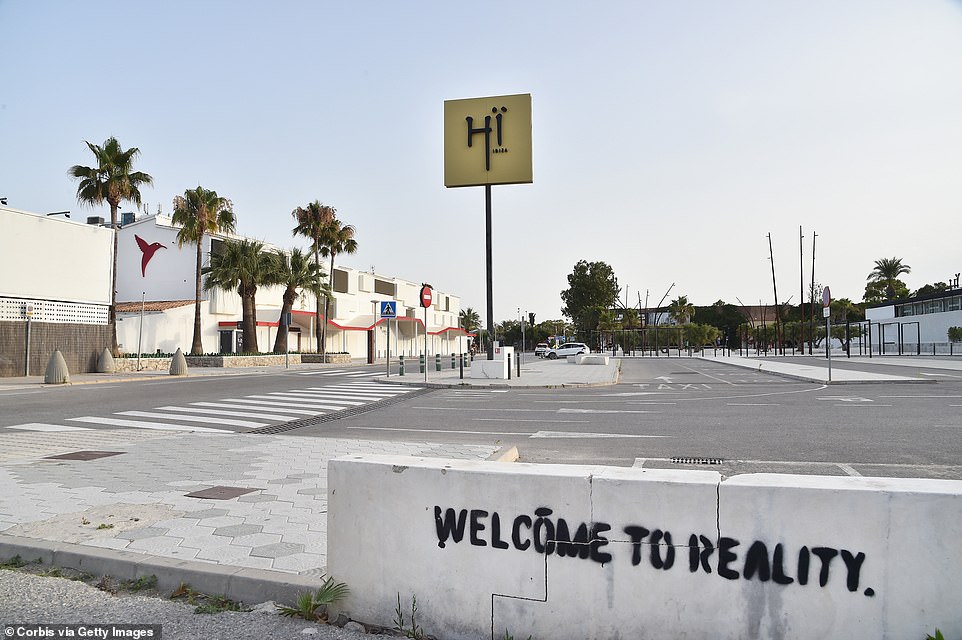 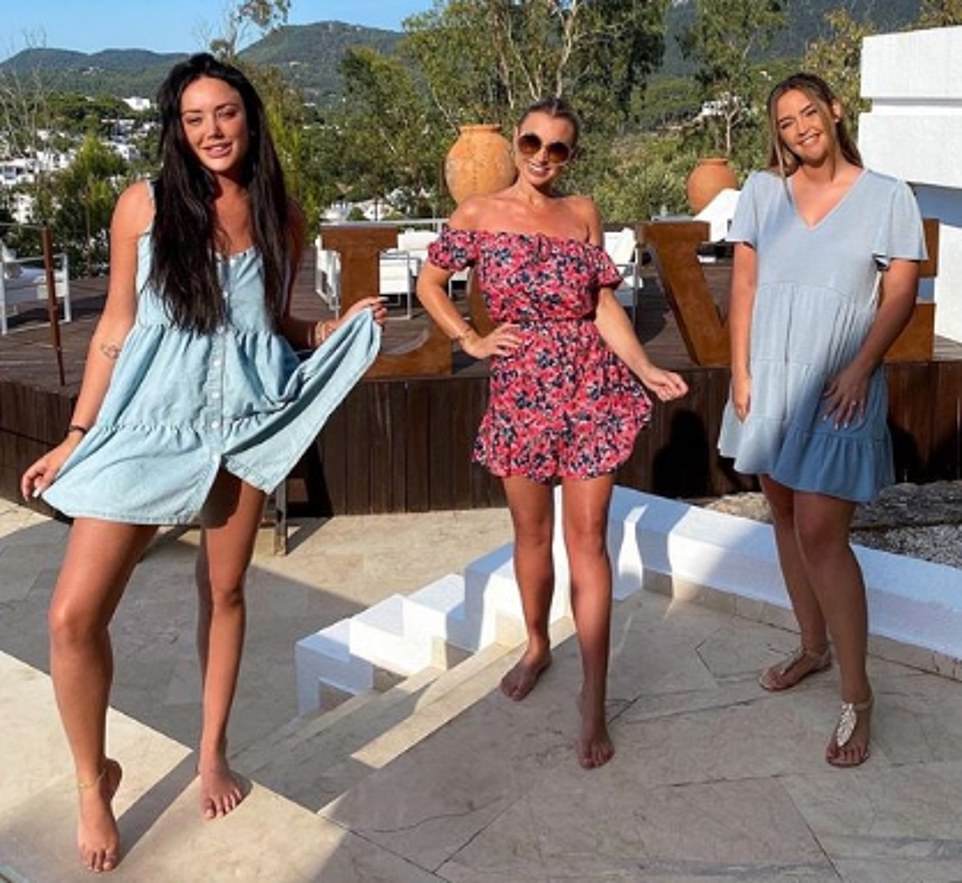 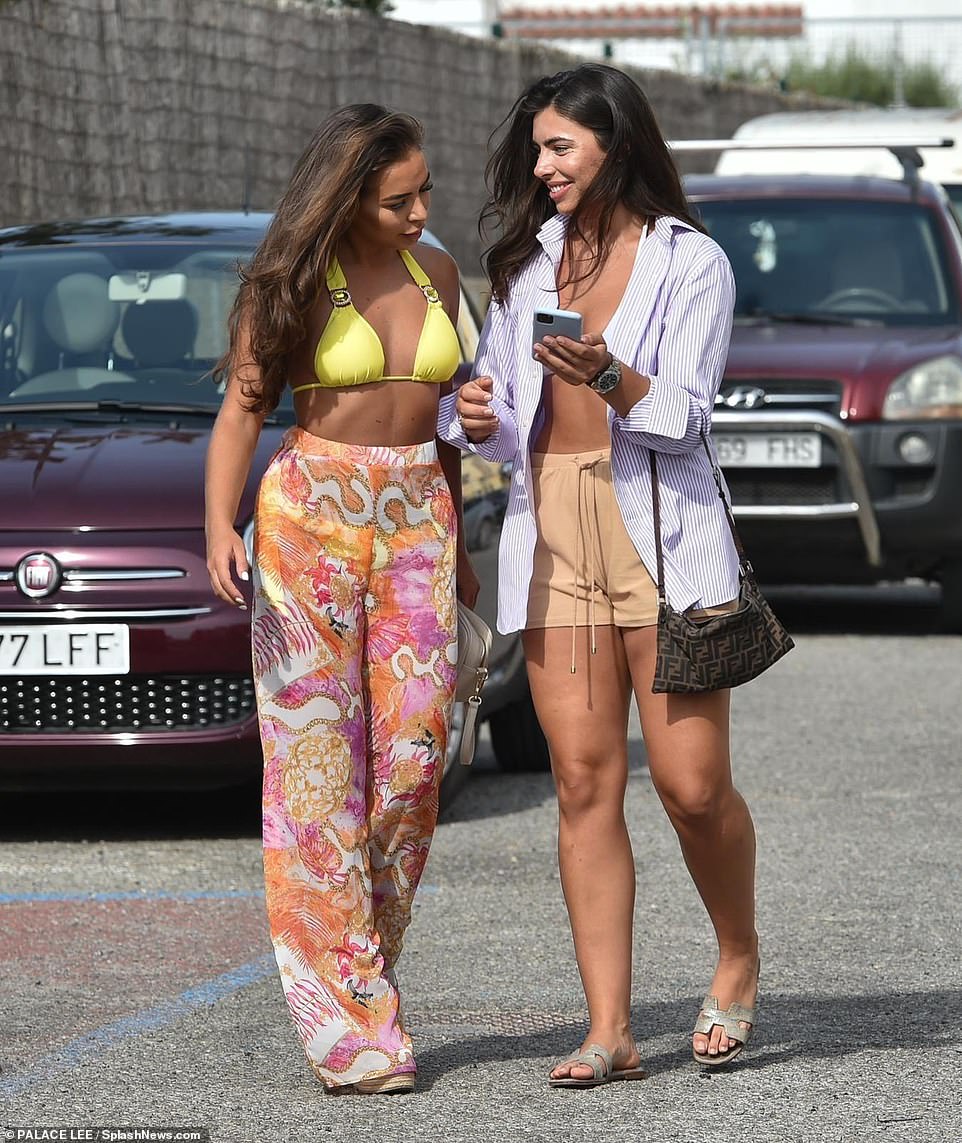 Fun in the sun: Love Island pals Elma and Francesca Allen headed to Ibiza’s famous Ocean Club for a day of drinks and fun 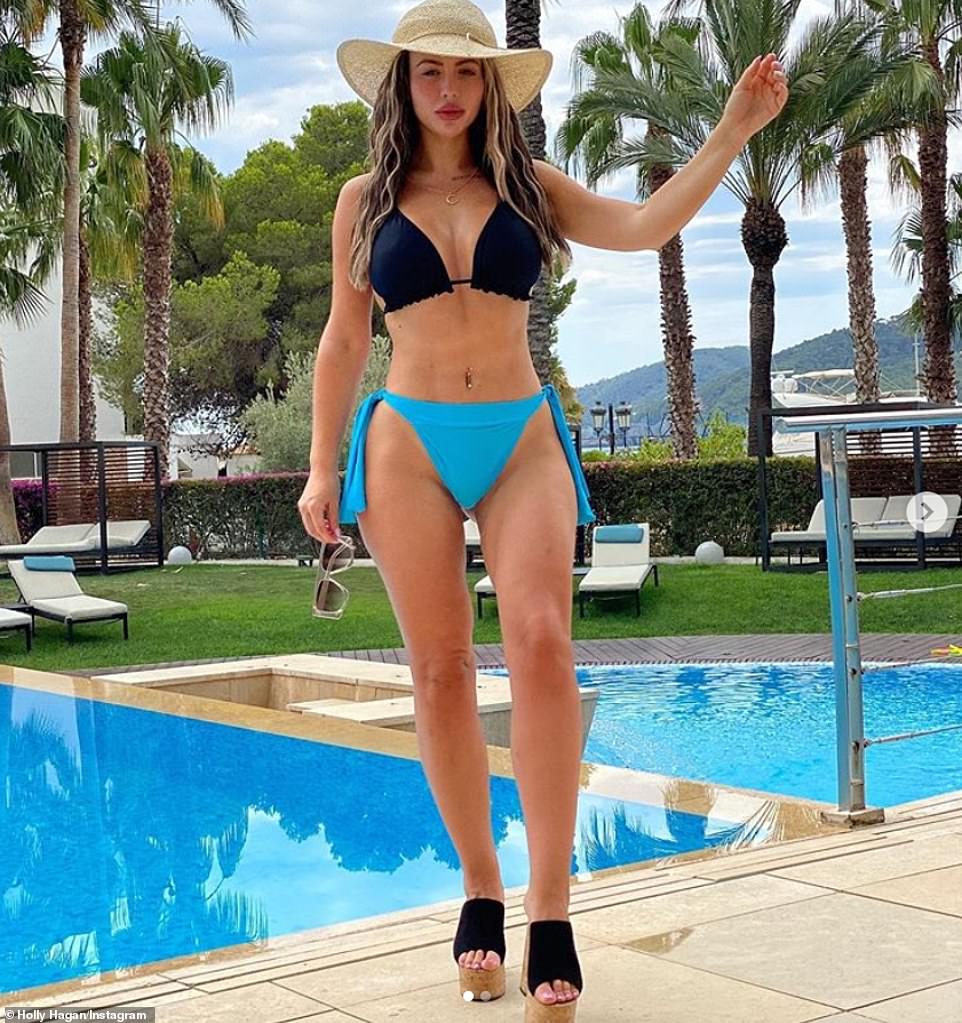 Sunny outlook: Holly Hagan shared a snap of herself in a bikini as she continued to enjoy her sun-soaked getaway in Ibiza 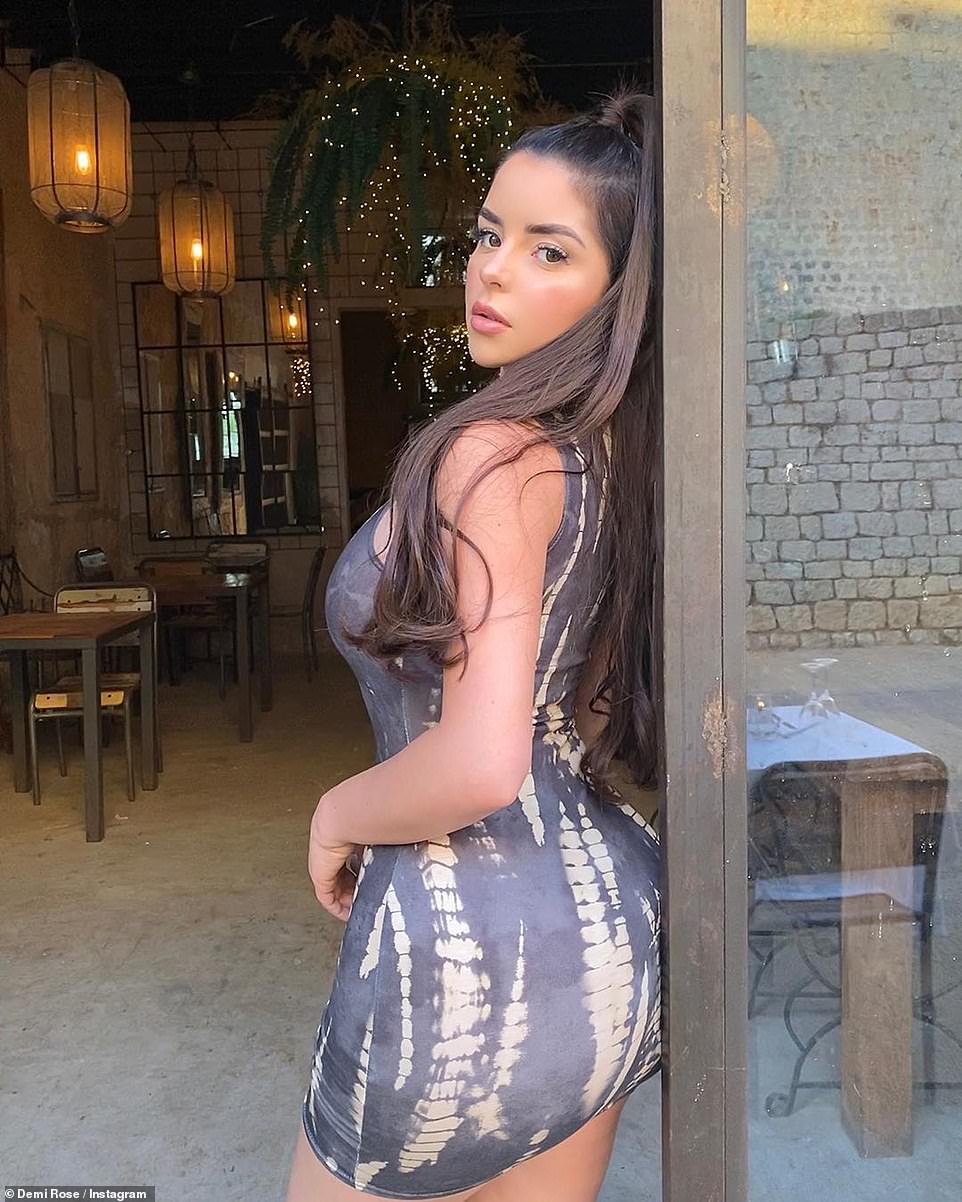 Cheeky: Model Demi Rose is also in Ibiza and posed for this Instagram snap on Thursday

The trio were also seen enjoying a drink at Ibiza’s O Beach outdoor club, which has been able to remain open.

Geordie Shore’s Holly Hagan was also seen posing with what appeared to be a glass of gin and tonic by the pool at the Aguas de Ibiza luxury hotel.

She wrote on Instagram that she ‘highly’ recommends the hotel for ‘a bit of luxury’ and to ‘experience the quieter side of Ibiza’.

Other celebrities on the island include model Demi Rose, Love Island’s Elma Pazar and Francesca Allen.

But despite the luxury shots, Ibiza’s famous night spots are still shut as part of lockdown measures.

The famous Amnesia club, along with Privilege, Ushuaïa and Hï Ibiza, were all seen closed.

The island’s streets were also seen free of people and with shops shuttered. They would usually be serving thousands of tourists flocking through the streets each and every day of the summer season. 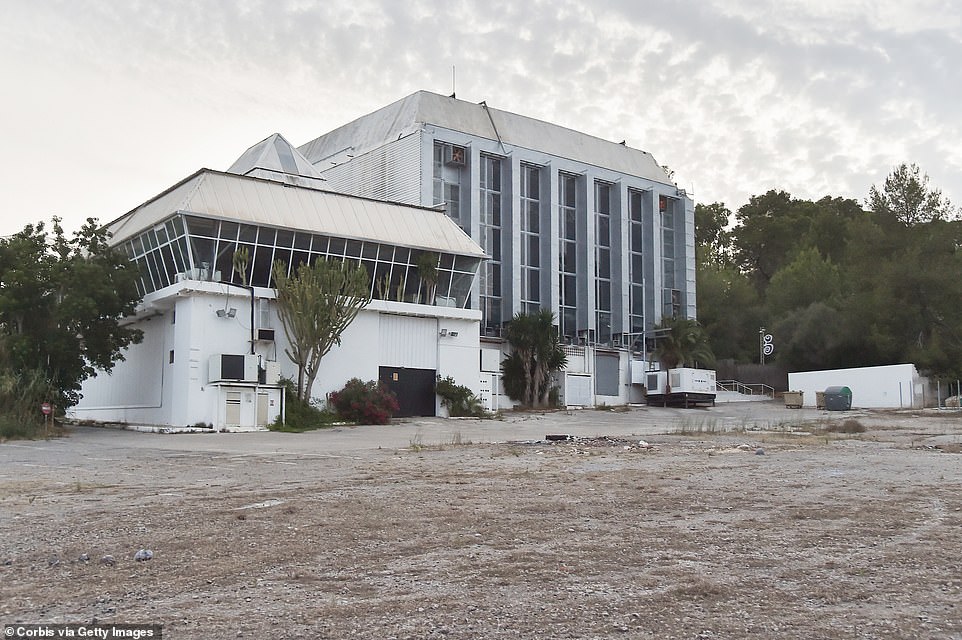 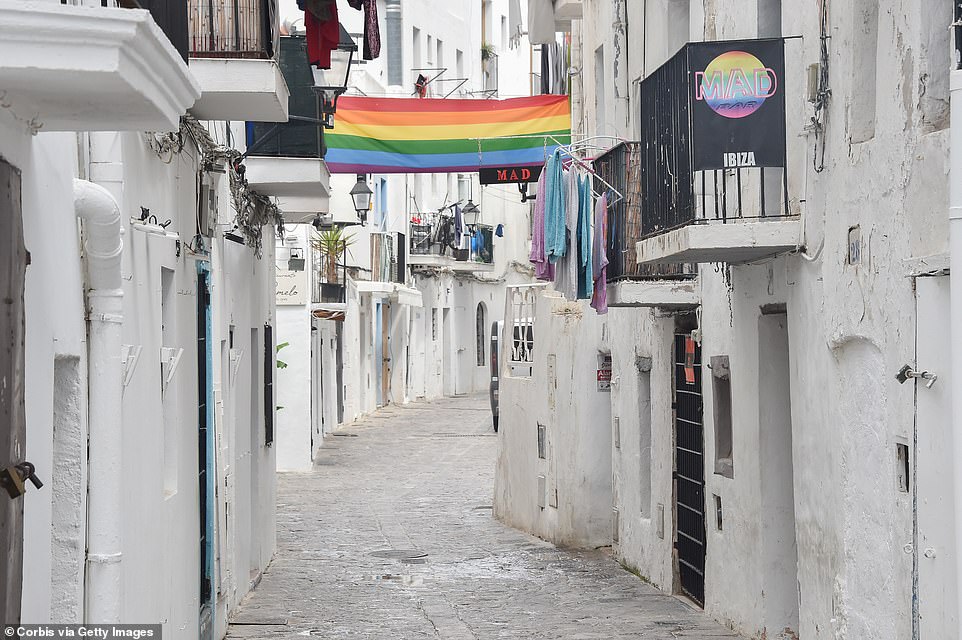 Clubs in Magaluf’s Punta Ballena strip were also seen with their shutters down after local authorities took the decision to close them following scenes of bad behaviour by British tourists.

Tourists who did not know about the impending ban and had still gone to the island were seen walking past the closed establishments.

Along with Punta Ballena, two other party strips in Playa de Palma, south-east of the Majorcan capital Palma, have also been shut down, known locally as Ham Street and Beer Street – or calle del Jamon and calle de la Cerveza in Spanish.

The closures came after images and a video emerged of revellers jumping on cars and ignoring the island’s coronavirus social distancing regulations . 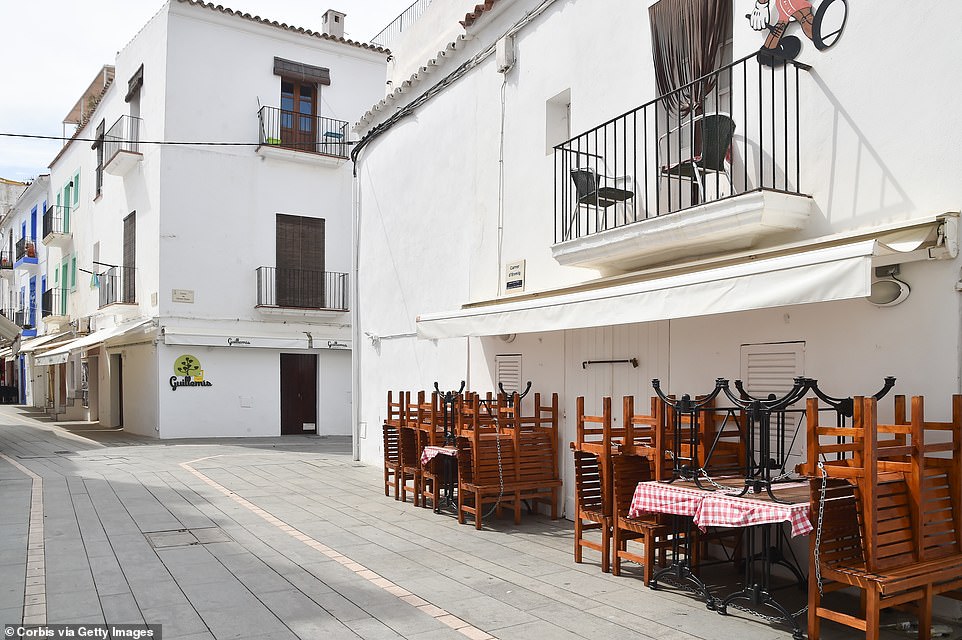 Even though the summer season has technically kicked off, Ibiza’s streets remain very quiet. Pictured: A shuttered cafe on the island 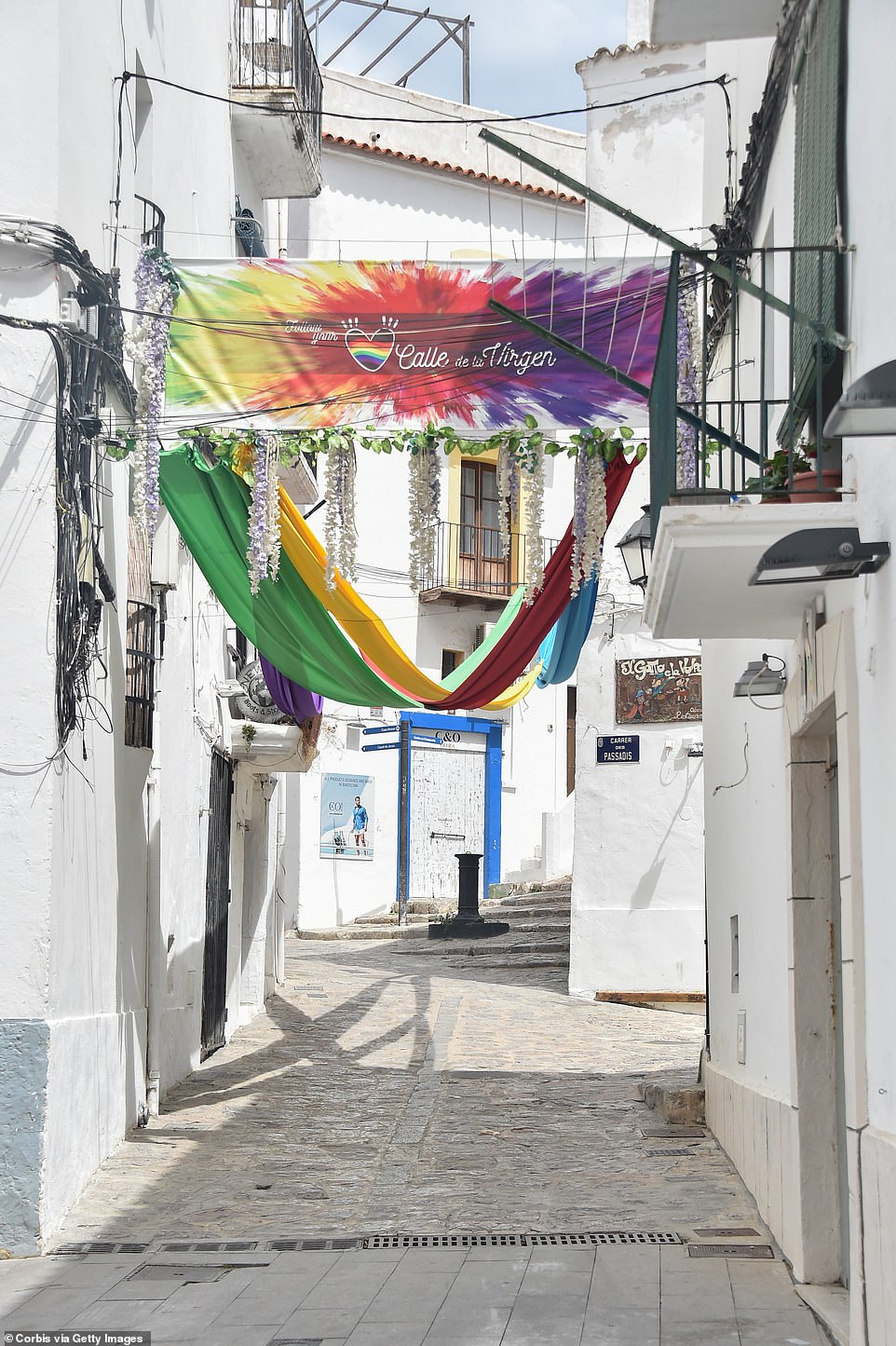 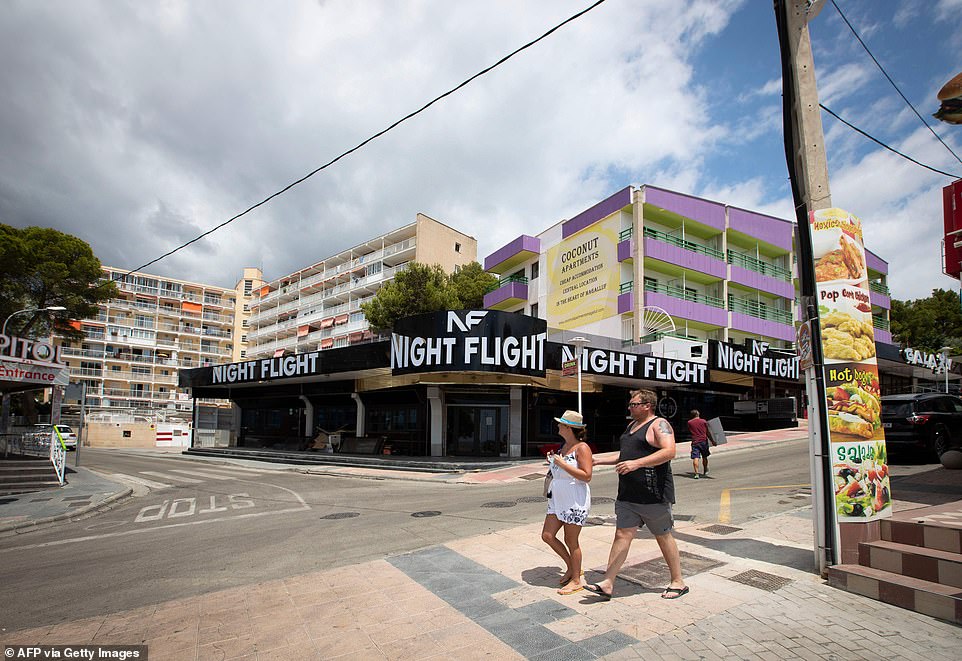 On Magaluf’s famous Punta Ballena strip of bars and clubs, all of which were forced to close earlier this week, two tourists were seeen walking past deserted establishments 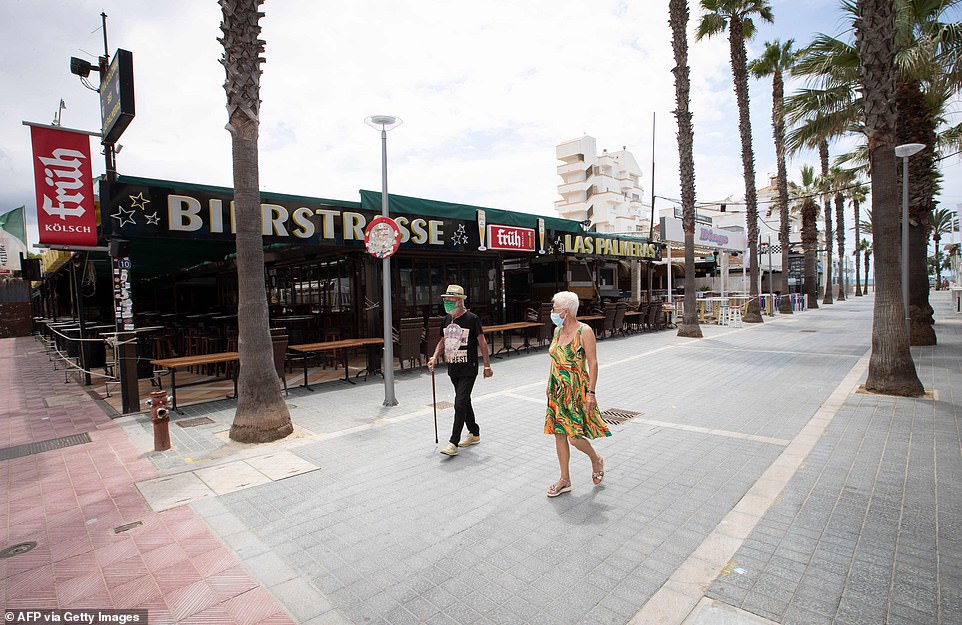 ‘I think it’s a sufficiently clear message to those practicing the type of tourism of excesses we don’t want here that they shouldn’t come because those types of establishments are not going to be able to open. 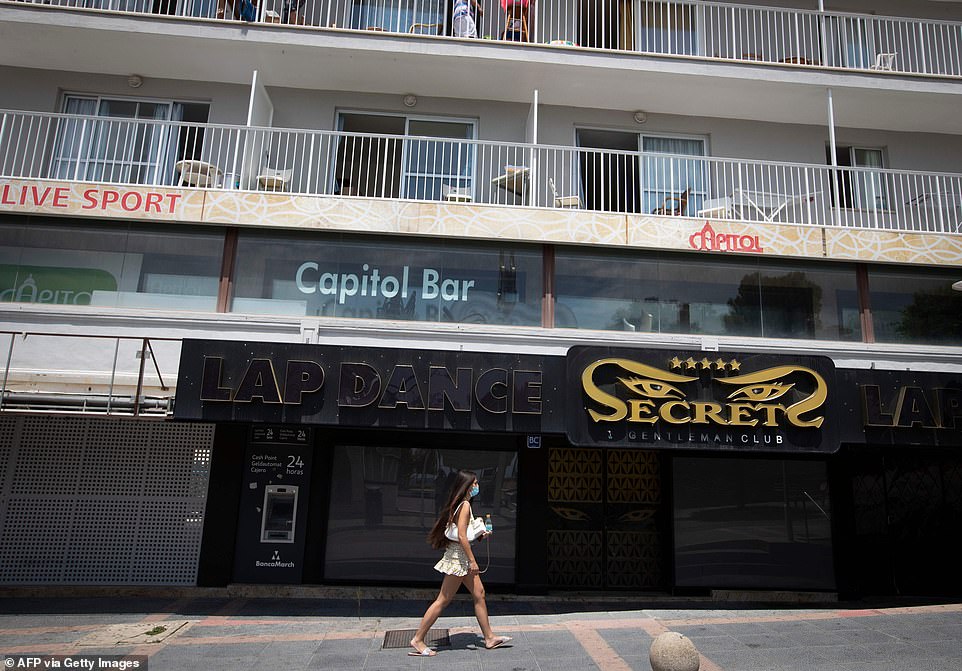 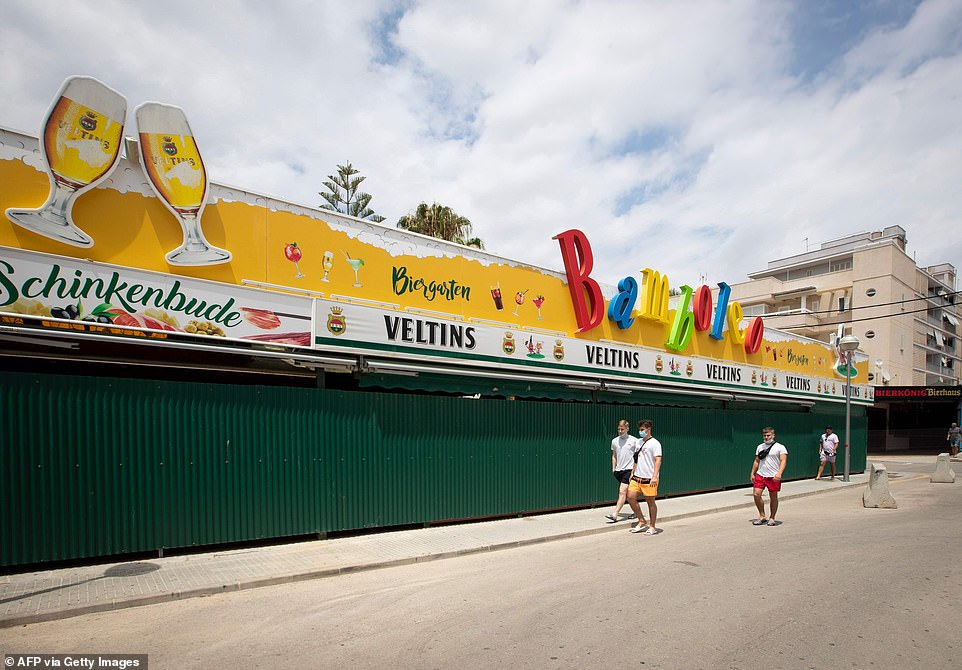 Calle de Jamon on Majorca was also largely deserted, bar a few tourists who will have come to the island hoping for its usual bustling night life 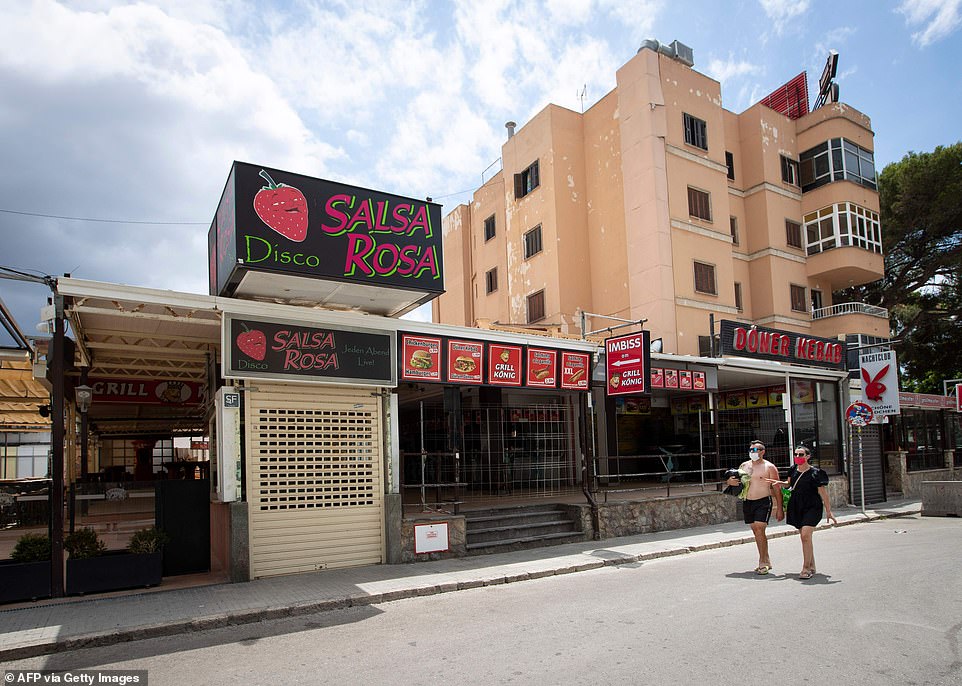 To heap further misery on ordinary Britons, those on holiday in the Balearic Islands also face being fined £22, £45 or £90 from Monday if they are not wearing a mask.

The new rule came into place in Mallorca, Ibiza, Menorca and Formentera on July 13th and applies to virtually all pubic places, with the exception of the beach, swimming pool, countryside or whilst eating or drinking in a restaurant.

The level of the fine (25, 50 or the maximum of 100 in euros) will depend on the circumstance and ‘the severity of the breach’.