Gladys Berejiklian has made history as the first female New South Wales Premier to win an election in her own right.

The 48-year-old daughter of Armenian migrants won a third consecutive term for the Coalition, a feat which hadn’t been achieved in the state since 1971.

Labor struggled in Sydney, where it picked up just one seat from the Liberal Party, after video emerged of Opposition Leader Michael Daley blaming Asian immigrants for taking jobs away from young Australians.

The election also saw former federal Labor leader Mark Latham win an upper house seat for One Nation, as the Shooters Fishers and Farmers Party tripled their presence in the lower house.

Mr Latham, running under the banner of Pauline Hanson’s party, has returned to politics for the first time in 14 years, after winning an eight-year term in the NSW Legislative Council.

‘At the moment we are tracking towards two quotas and when the metropolitan numbers are counted in the Legislative Council they are pretty encouraging,’ he said.

Labor has only gained Coogee in Sydney, with the Opposition’s poor result blamed on video of Mr Daley blaming Chinese immigrants with a PhD for taking the jobs of young Australians.

He vowed to continue as Labor leader, even though the Opposition failed to win the Liberal Party’s most marginal seat of East Hills. 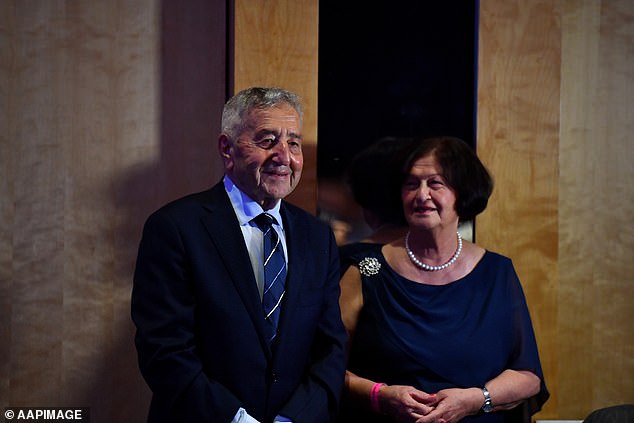 The daughter of Armenian migrants is Australia’s first female conservative premier to win an election in her own right, after 5.27 million voters cast their ballot (pictured are Krikorat and Arsha Berejiklian, the proud parents of the Premier)

In her victory speech, Ms Berejiklian said she was proud to live in a state where ‘someone with a long surname and a woman’ could be Premier.

She promised to work closely with the state’s three independents ‘whether or not my government is a majority or a minority government’.

‘We will continue to govern for all of you,’ she said, in the presence of past and present Liberal prime ministers John Howard and Scott Morrison.

‘For the first time in nearly half a century the people of NSW have seen as fit to give us a third term,’ Ms Berejiklian said. 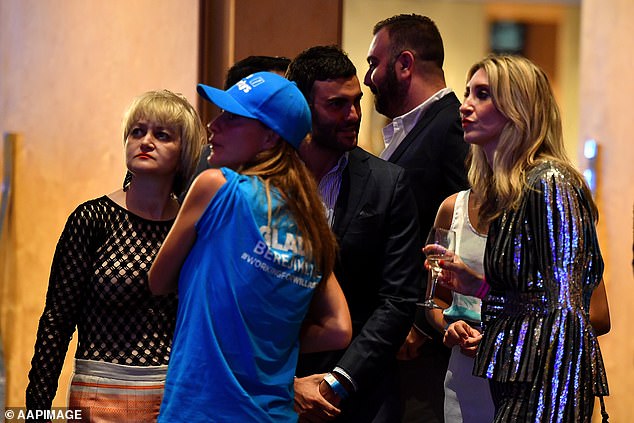 The Premier declared her Liberal Party had not conceded a seat at the election, despite being on course to lose Coogee in Sydney’s south-east to Labor as it kept its most marginal electorate of East Hills, in the city’s south-west.

‘The Liberal Party will not concede a single seat loss in this election,’ she said.

‘In some of our seats we’ve had a swing to the government.’

Seats that have changed

Labor appears to have gained this electorate in Sydney’s south-east from the Liberal Party. The ALP lost this seat in the 2011 landslide loss after holding it for 37 years.

Labor could gain this northern NSW electorate from the Nationals, which it hasn’t held since 1965.

BARWON: The Shooters Fishers and Farmers appear to have taken this seat from the Nationals, which had held it since 1950 when they were the Country Party.

The Shooters have also gained this electorate in the far-west of NSW which has mainly been in conservative hands since 1932.

With fixed, four-year terms, her win means the Liberal and National parties will, by 2023, have been in power for 12 years, the longest in the history of the Coalition parties in NSW.

Other results show Labor is ahead in the Nationals-held seat of Lismore, which it hasn’t held since 1965.

The government’s net loss of four seats, so far, would see the Coalition stay in power with a narrow majority, holding 48 lower house seats in the 93-seat Legislative Assembly.

Mr Daley conceded defeat shortly after 9.30pm AEDT, making a phone call to the Premier as results showed the Opposition with only 35 or 36 seats.

He told party faithful 25 minutes later he intended to remain leader of the Labor Party and said his 134 days heading the Opposition, since November, wasn’t enough time.

‘I thought that would be enough time to get across the state,’ he said.

‘It really hasn’t been a great result for the major parties and we do have more work to do.’

Mr Daley mistakenly said he had been the member for Maroubra since 1995 even though he didn’t win that Sydney seat in a by-election until 2005, when former Labor premier Bob Carr retired from Parliament.

‘I thank the people of Maroubra who have re-elected me again tonight,’ he said.

‘They’ve been doing so continually since 1995.’ 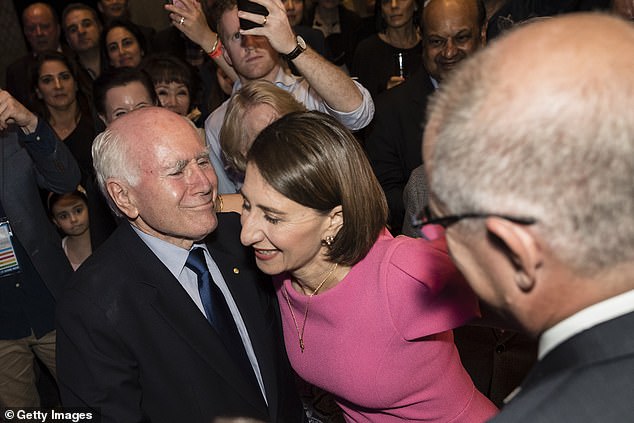 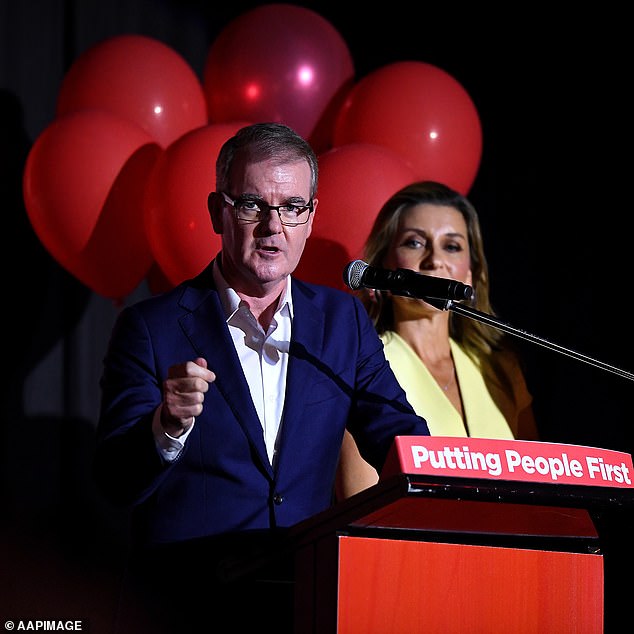 During the final week of the campaign, Mr Daley had told a Sky News People’s Forum debate Labor would spend another $3 billion on TAFE, when the Opposition policy was to increase spending by $64 million over four years.

The man who wanted to be the next premier of NSW had his sums wrong by a staggering 47 times.

‘This has been a very good result for the Liberal Party tonight,’ he said.

‘There will be a Coalition government.’ 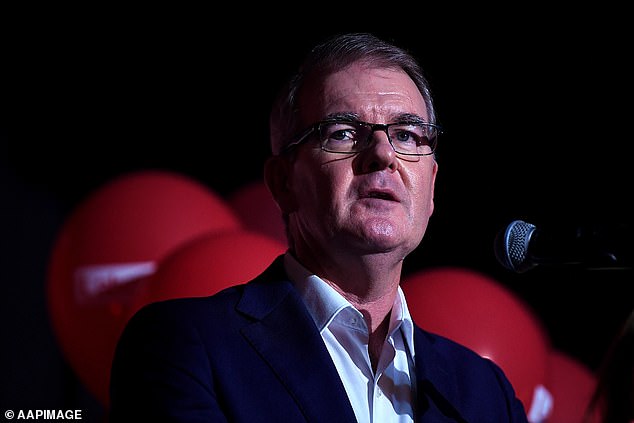 He told party faithful 25 minutes later he intended to remain leader of the Labor Party and said his 134 days heading the Opposition, since November, wasn’t enough time 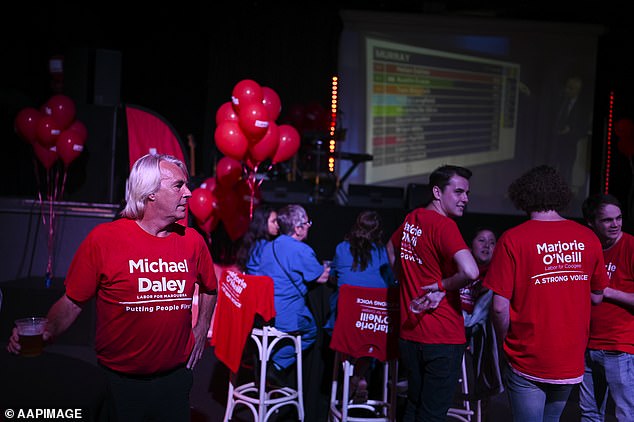 In the upper house she may need to rely on the support of former federal Labor leader Mark Latham, who is likely to have won a seat for One Nation.

Labor is unlikely to have significantly improved on its 2015 seat tally of 34 as it struggled in Sydney.

The swing towards the Labor Party was too weak in Sydney for it to gain enough seats to have a shot at forming a minority government with the support of the Greens.

Statewide, the Liberal Party had 33.2 per cent of the primary vote with the Nationals winning 8.6 per cent, giving the government 41.8 per cent of first preferences.

Labor had 33 per cent first-preference support. 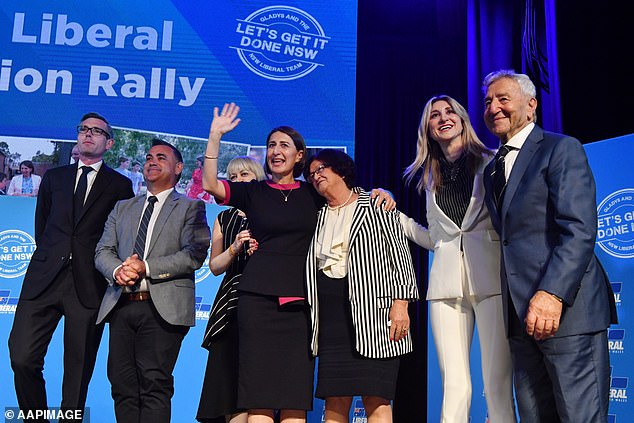 In Sydney, Labor only picked up Coogee from the Liberal Party, where it secured a 3.6 per cent swing.

Updated counting showed a 0.3 per cent swing to the Liberals in East Hills, the party’s most marginal seat.

Key seats that could decide the NSW election

The Liberal Party’s most marginal seat in south-west Sydney was won by less than 400 votes in 2015.

Barrister Cameron Murphy, a former head of the NSW Council for Civil Liberties and son of a High Court judge, is running again.

He faced a nasty smear campaign in 2015, with pamphlets falsely accusing him of being a ‘paedophile lover’ based on his work as a civil libertarian.

The Liberal Party could struggle to held this beach-side seat in Sydney’s south-east.

The delayed completion of the South East Light Rail could hurt the chances of the former Randwick mayor.

Labor has a strong chance in this seat near Canberra, even though it hasn’t held it since 1965.

The margin of 6.6 per cent is also relatively safe for the Liberal Party.

Cabinet minster Pru Goward, however, is retiring and Labor’s candidate Ursula Stephens was previously a senator.

While Labor hasn’t held this seat for 53 years, it has a chance following the retirement of long-time Nationals MP Thomas George.

The Nationals suffered a massive 21.5 per cent swing against them in 2015, clinging on by just 2.9 per cent, after preferences.

This time, Labor is running former state and federal MP Janelle Saffin, who is odds-on favourite.

Labor has short odds in this rural seat it hasn’t held since 1910.

The National Party holds it be a slim 2.2 per cent margin, making it their most marginal seat.

Michael Johnsen was elected in this seat, which takes in Muswellbrook and Singleton, despite suffering a 20.8 per cent swing against him in 2015.

The Shooters Fishers and Farmers Party are odds-on favourites with Sportsbet to claim from the National Party this seat which covers much of western NSW.

The Shooters party won Orange in a 2016 by-election and are looking to pick up more seats west of the Great Dividing Range.

Sportsbet also has Labor as favourites to claim from the National Party this coastal seat, which straddles the Queensland border.

Geoff Provest has been the local member since 2007 and wants his electorate to be in the same time zone as Queensland.

Sports Minister Stuart Ayres holds this seat by a 6.2 per cent margin, making it the Liberal Party’s third most marginal seat.

Labor’s candidate barrister Cameron Murphy, who also failed in 2015, conceded Mr Daley’s comments had ‘done a lot of damage’ but added over development was a bigger issue.

The Opposition is also in trouble in Kogarah, in Sydney’s south, with the Liberal Party’s ethnic Chinese candidate Scott Yung recording an 8.7 per cent swing against Labor in early counting.

Kogarah, where the margin was 6.9 per cent, was one of the 20 seats Labor kept in 2011 as it suffered its worst-ever election loss in NSW.

‘The feedback that I got, they were regarded as a setback to us,’ she told the ABC.

‘That is really a disappointing result.’

The National Party was under threat in Upper Hunter, with early counting showing a 4.2 per cent swing to Labor with preferences from the Shooters Fishers and Farmers Party.

This would be enough for the rural electorate to fall into Labor hands for the first time since 1910, but later results showed that was unlikely.

While most polls were tipping a hung parliament after the election Malcolm Mackerras, a veteran election analyst, had predicted Ms Berejikian’s Coalition government being returned with a majority based on the strength of the state economy.

‘I do think she deserves to be re-elected,’ he told Daily Mail Australia last week.

‘Also, she has changed her reputation from being indecisive to being decisive by insisting on the stadiums decisions that they’ve made and not being bullied out of those decisions.

Mr Mackerras had predicted the Berejiklian government would lose four seats, giving it 48 electorates in the lower house of Parliament.

Deputy Premier John Barilaro is safe in his marginal Nationals seat of Monaro, with a swing of 3.5 per cent towards him on postal votes.

‘It’s not a sigh of relief, it’s early counting,’ he told the ABC.

Liberal Sports Minister Stuart Ayres was safe in his western Sydney seat of Penrith, the Liberal Party’s third most marginal.

Labor was hopeful of an upset win in Goulburn in southern NSW, which it hasn’t held since 1965, following the retirement of cabinet minister Pru Goward, the mother of former model Tziporah Malkah.

Labor needed to pick up 13 seats in Saturday’s election to clinch an outright majority.

A special Newspoll, published in The Weekend Australian, showed the coalition ahead of Labor 51-49 on a two-party preferred basis.

On early exit poll results, this was shaping up to be the first hung parliament in NSW since the 1991 election when Nick Greiner was Liberal Party premier.

Just last week, Labor was leading in the polls, with a UComms /ReachTel poll showing the Opposition leading the government 51 to 49 per cent, after preferences.

Exit polls and early results predicted the Coalition would be returned without a majority, losing six seats to Labor. 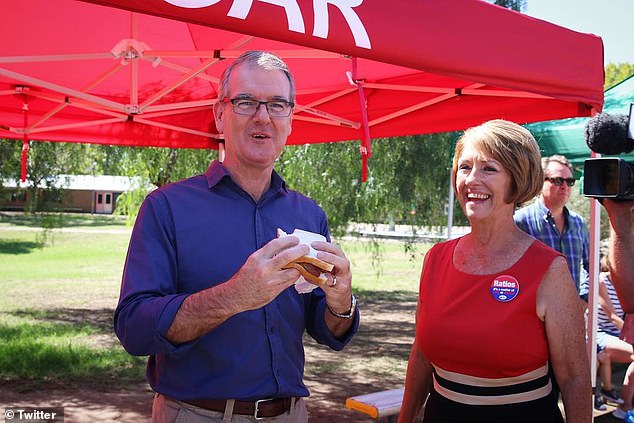 A Nine exit poll is pointing to a swing of 2.3 per cent to Labor (Opposition Leader Michael Daley pictured with Penrith candidate Karen McKeown) in Australia’s most populous state, with both parties on 50:50 support after preferences

Labor had traction early in the campaign by taking a stance against the $729 million rebuild of Allianz Stadium at Moore Park, in Sydney’s east, and another $810 million  replacement of ANZ Stadium at Sydney Olympic Park.

The Opposition struggled in the final week of the campaign, following revelations he blamed Asian immigrants for taking jobs away from young Australians.

Mr Mackerras said this would have hurt Labor in Sydney electorates with a high proportion of overseas-born voters.

‘It would offend them because they wouldn’t like to be called foreigners when they’ve taken out Australian citizenship,’ said.

‘If I was such a person I would be offended.

‘Michael Daley is not a particularly good leader for Labor.’

What happened in YOUR seat – New South Wales election results 2019

* Margins are from the 2015 election except for Orange and Wagga Wagga, which the government lost in by-elections