Japan is set to extend its Covid-19 state of emergency today in Tokyo and other areas just more than 50 days before the Tokyo 2020 Olympics is set to begin, but chiefs remain adamant the event will go ahead.

Tokyo and nine other areas in the country are currently under emergency orders, which involve closing bars and restaurants early and banning them from selling alcohol.

And on Friday, the Government’s advisory panel approved a preliminary extension until June 20, just one month before the pandemic-postponed Olympics is set to kick off on July 23.

The emergency was supposed to expire at the end of May in most areas, but the government said it needs more time to control a fourth wave of infections. A formal announcement is expected later today.

‘The overall level (of infections) continues to be very high,’ Yasutoshi Nishimura, the minister in charge of coronavirus response, said on Friday.

‘Considering this situation, we believe it is necessary to extend the state of emergency measures.’

Japan is set to extend its Covid-19 state of emergency today in Tokyo and other areas, but Tokyo 2020 (pictured: test event on May 9) chiefs remain adamant the event will go ahead 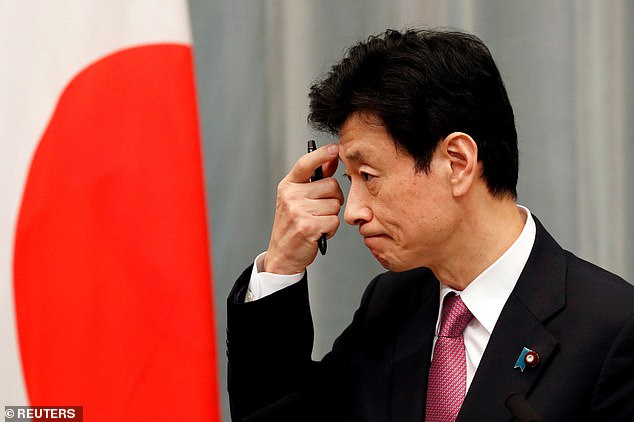 The emergency was due to expire at the end of May, but Yasutoshi Nishimura (above), the minister in charge of Covid response, said more time is needed to control a fourth wave

But Tokyo 2020 chiefs remain adamant that the global showcase event will go ahead as planned, citing extensive rulebooks aimed at keeping participants and the public safe.

Japan, which has recorded more than 730,000 infections and 12,500 deaths from the virus, has only delivered its first dose of vaccinations to just over 6 per cent of its population, while only 2.3 per cent has been fully vaccinated.

It comes after the Japanese government and the International Olympic Committee (IOC) have faced calls for a postponement or cancellation due to rising Covid cases, while some citizens have even taken part in protests against the Games.

Economy Revitalization Minister Yasutoshi Nishimura said the extension is needed as people are increasingly roaming in public, especially in Tokyo and Osaka, and it is feared lifting the measures would cause an instant rebound in infections.

Nishimura said the government proposal of a 20-day extension in the nine areas received preliminary approval from experts ahead of an official announcement on Friday. The southern island prefecture of Okinawa is already under emergency status through June 20.

‘In Osaka and Tokyo, the flow of people is starting to creep up, and there are concerns that infections will rise,’ Nishimura said in a meeting with experts.

The current emergency in the capital and eight other metropolitan areas was to end on Monday, but hospitals in some areas are still overflowing with Covid-19 patients and serious cases hit new highs recently.

Under the government’s current plan, about 30 per cent of the population would be vaccinated by the end of July, Nishimura confirmed. 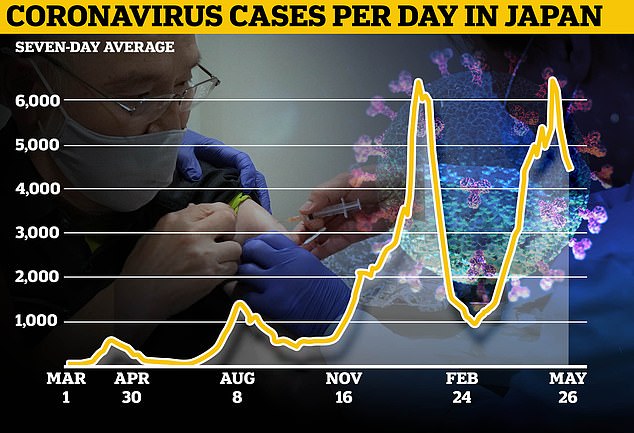 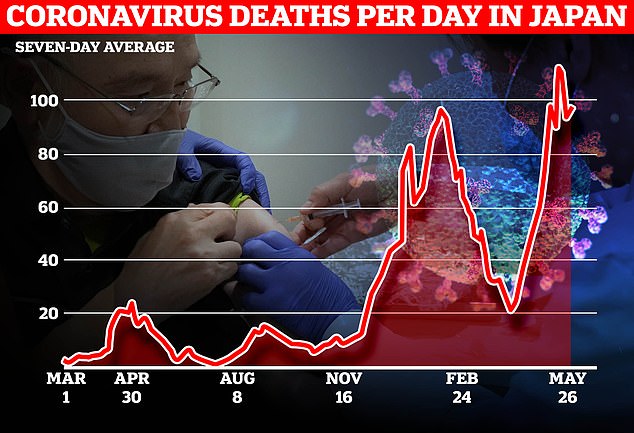 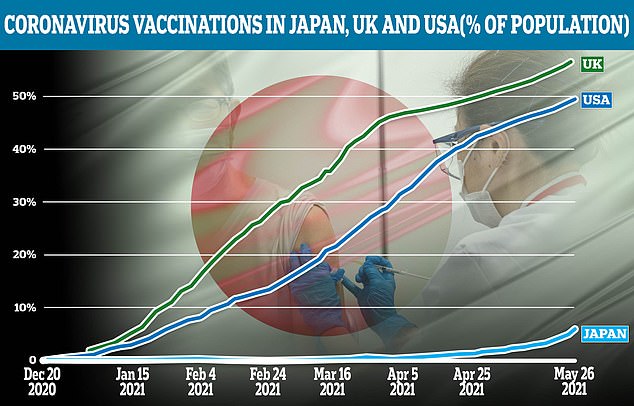 Japan, which has recorded more than 730,000 infections and 12,500 deaths from the virus, has only delivered its first dose of vaccinations to just more than 6 per cent of its population

Despite the backlash from many Japanese citizens about the Games, Prime Minister Yoshihide Suga and his government are determined to host the Olympics.

Olympic chief Thomas Bach told athletes they should travel to Tokyo with ‘full confidence’ that the delayed 2020 Games will be safe for competitors and not jeopardise the health of the Japanese people.

Speaking in a Q&A session during an online conference of the Athletes’ Commission on Thursday, the International Olympic Committee (IOC) President said the safety of athletes was at the heart of planning for the Games.

‘Tokyo is the best prepared Olympic city ever and this relates particularly to the focus they are putting on the athletes and the athletes’ experience,’ the German told around 2,000 athletes and Olympic officials from Lausanne.

‘Because of the pandemic we all know, unfortunately, the athletes’ experience will be very different but what is important is the competitions can and will take place in a safe way and in full respect of the athletes.

‘Come with full confidence to Tokyo and get ready,’ he added.

Bach has previously said 80 per cent of the 10,500 athletes expected in Japan would be vaccinated and on Thursday urged Olympians to get their shots if they could.

Last week, the IOC Vice President John Coates, who oversees the preparations, said the Games were on whether or not the host city, Tokyo, is under an emergency state.

Olympic organizers are yet to decide whether to allow any fans at all at the global showcase event, after overseas spectators were banned months ago.

Worries about variants of Covid and a slow vaccination drive have prompted calls from doctors, some high-profile business executives and hundreds of thousands of citizens to cancel the Olympic Games, due to run from July 23 until August 8.

Legally, only the IOC has the right to cancel the Games because Japan is contractually obliged to go ahead with the event.

On Thursday, Naoto Ueyama, chair of the minor Japan Doctors Union, warned the Games could produce a ‘Tokyo Olympic strain’ of coronavirus and urged a cancellation to prevent a ‘disaster’.

Meanwhile, Haruo Ozaki, head of the larger Tokyo Medical Association with more than 20,000 members, said organisers would have to bar all spectators at a ‘minimum’.

Even under the current state of emergency, sports venues in Japan are allowed to seat 5,000 spectators or 50 percent capacity, whichever is smallest.

Officials have been trying to drive home the message that the Games are on and will be safe, announcing recently that the vast majority of those in the Olympic village will be vaccinated.

Australia’s softball team is expected to arrive next week to start training in Japan, and Japanese athletes and Olympic staff will start receiving vaccines from June 1.

They will be jumping the queue in Japan’s slow vaccine rollout, with jabs currently only available to medical workers and the elderly.

The UK Government and the British Olympics Association, which oversees Team GB, are fully behind the Games – despite the US State Department on Monday issuing its highest Level 4 travel warning for the Asian nation. 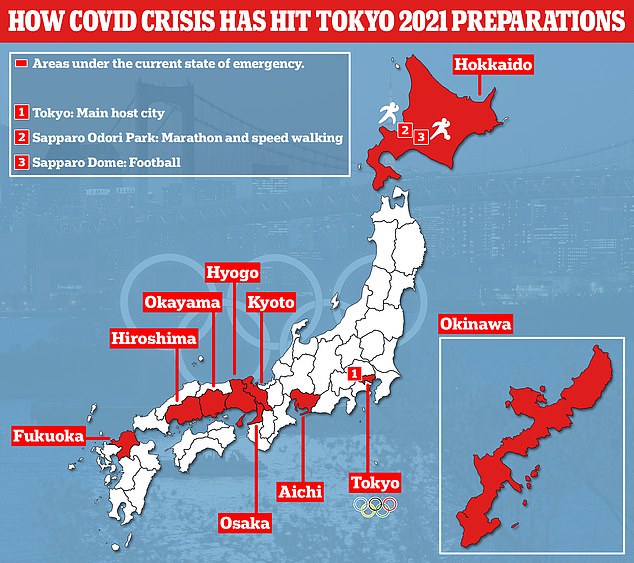 Tokyo, along with the Hokkaido, Aichi, Osaka, Kyoto, Hyogo, Okayama, Hiroshima and Fukuoka prefectures, are under a state of emergency until May 31 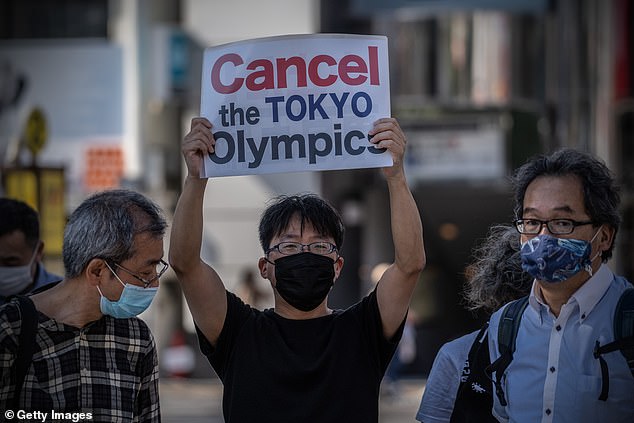 The Japanese government have faced calls for a postponement or cancellation of the Games due to rising Covid cases. Pictured: Man holds a placard in demonstration on May 23 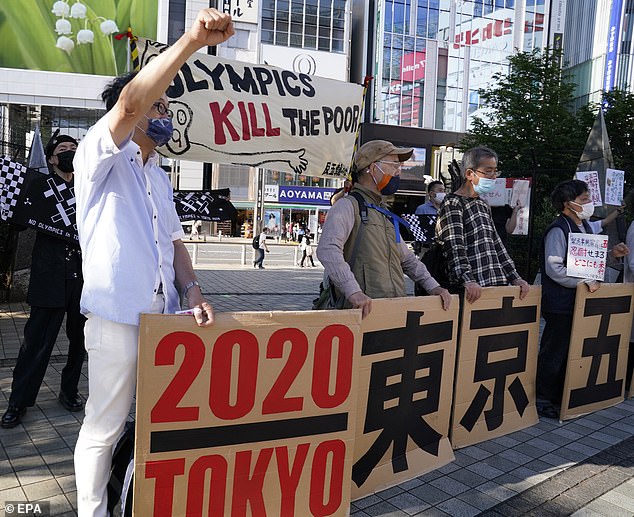 It comes after a scientist on Independent Sage called for the cancellation of the Tokyo Olympics while the world fights the ‘extremely dangerous’ coronavirus.

Earlier this week, Professor Gabriel Scally, visiting professor of public health at the University of Bristol, said the Olympics were ‘not feasible’ during the pandemic.

He also warned that exempting athletes from quarantine would create a ‘big melting pot’ which could be a ‘recipe for a potential outbreak of some magnitude’.

Speaking to MailOnline on Tuesday, Professor Scally said: ‘We haven’t had an Olympics in years when there are world wars on, and the world is currently fighting a battle against an extremely dangerous disease.

‘You can’t have an armistice to call a halt to this pandemic. Exempting athletes from quarantine strikes me as completely amazing. The creation of a big melting pot of people from across the world who haven’t gone through isolation seems to be a recipe for a potential outbreak of some magnitude.

‘They are all going to be fit and healthy people but nonetheless it is still a problem. As well as living in close proximity many will also be engaging in contact sports. They need to postpone the Olympics or not have it.’

However, a BOA spokesman said in a statement: ‘We remain fully committed to sending our full team to the Tokyo Olympic Games, and everything we hear from our colleagues in Tokyo, the Japanese Government and the IOC tells us that the Games are going ahead.’

The spokesman pointed out that US athletes would still be competing, adding: ‘We also note our colleagues at the United States Olympic Committee spoke of their ongoing confidence for their participation at the Games this summer.’

The UK Foreign Office yesterday repeated its position that Japan is off limits to Britons, but athletes and staff can go after Culture Secretary Oliver Dowden lobbied Boris Johnson to allow all Team GB members to receive a dose of the Pfizer vaccine.

Team GB Chef de Mission Mark England yesterday said he was ‘100 per cent confident’ the Games would happen thanks to the vaccine deal, which a government spokesman today said should provide ‘reassurance’ to athletes.

Meanwhile, a growing number of investors in Japanese stocks believe cancelling the games is better for the market, further intensifying the pressure on Prime Minister Yoshihide Suga to postpone the Olympics.

Financial leaders fear that the potential damage to Mr Suga, as well as the resulting political uncertainty, could cause a major hit to the economy, as could a fresh surge in infections following the arrival of thousands of competitors and staff.

‘An increasing number of people think not holding it is better for Japanese stocks, than doing it and ending up with political instability,’ Arihiro Nagata, general manager of global investment at Sumitomo Mitsui Bank, previously told the Japan Times.

And Takahide Kiuchi, executive economist at NRI, said cancelling the Olympic Games will still be less of an economic loss than the damage caused if another Covid state of emergency is declared following the event.

Kiuchi explained: ‘Even if the games are canceled, the economic loss will be smaller than (the damage done by) a state of emergency. 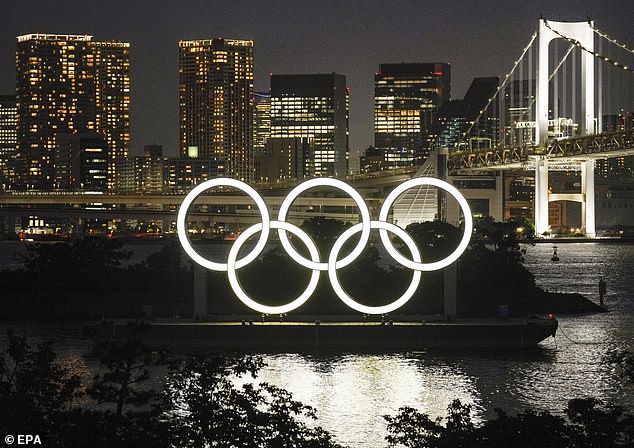 But Tokyo 2020 chiefs remain adamant that the global showcase event will go ahead as planned, citing rulebooks aimed at keeping participants and the public safe (file image) 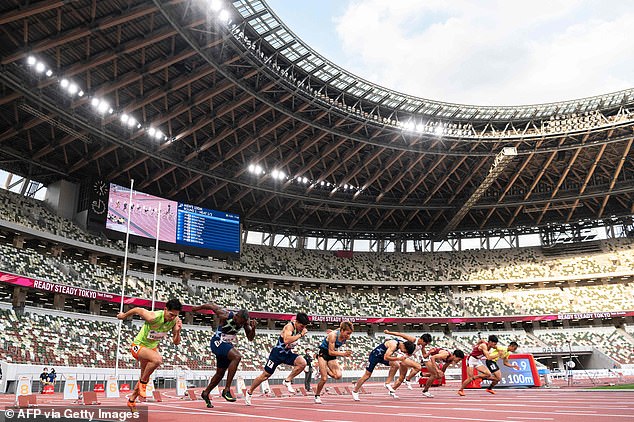 Worries about variants of Covid have prompted calls from doctors, business executives and hundreds of thousands of citizens to cancel the Olympics (pictured: test event on May 9) 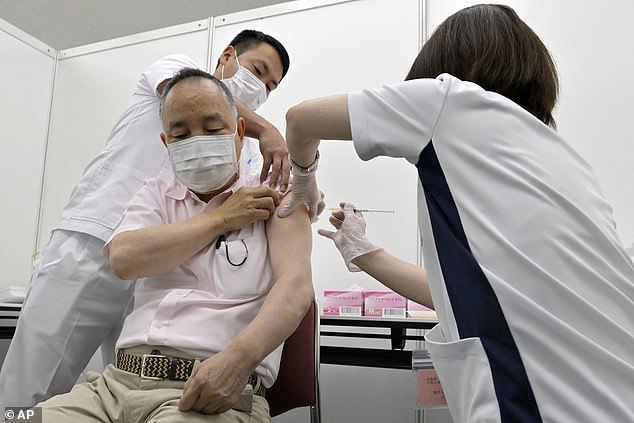 Japan is in the grip of a month-long state of emergency and has delivered vaccinations to just under 5 per cent of its population. Pictured: Elderly man gets Moderna jab in Osaka on May 24

There will be a $15billion (¥1.66 trillion) loss if the Tokyo Games is held without spectators, according to calculations by the institute.

But Kiuchi estimated that Japan’s first state of emergency in spring 2020 cost the country around $59billion (¥6.4 trillion), while the second between January and March saw losses of $58billion (¥6.3 trillion).

The current emergency declaration, which came into force in late April, will already lead to a loss of $17billion (¥1.9 trillion), while this will likely increase now the emergency has been extended past Monday, according to estimations.

Elsewhere, dozens of Japanese local leaders have responded to a wave of anti-Olympics street protests by refusing to host athletes in their cities.

At least 40 out of 500 towns registered to accommodate international competitors have now declined to do so in order to avoid putting extra pressure on hospitals, according to local reports.

Hospitals in Japan’s second largest city of Osaka are buckling under a huge wave of coronavirus infections, running out of beds and ventilators as exhausted doctors warn of a ‘system collapse’ and want the Games cancelled.

‘The Olympics should be stopped, because we already have failed to stop the flow of new variants from England, and next might be an inflow of Indian variants,’ said Akira Takasu, the head of emergency medicine at OMPUH.

He was referring to a variant first found in India that the World Health Organization (WHO) designated as being of concern after initial studies showed it spread more easily.

‘In the Olympics, 70,000 or 80,000 athletes and the people will come to this country from around the world. This may be a trigger for another disaster in the summer.’

Japan’s western region – home to 9 million people – is suffering the brunt of the fourth wave of the pandemic, accounting for a third of the nation’s death toll in May, although it constitutes just 7 per cent of its population.