Somalia’s president is expected to announce a “state of war” against the al-Shabab extremist group after last week’s truck bombing which killed 358 people in Mogadishu.

The United States is expected to play a supporting role in the new offensive planned by President Mohamed Abdullahi Mohamed, a Somali military official said.

The president’s emergency speech has been postponed after the death toll of Somalia’s deadliest attack rose to 358, while dozens remain missing.

Somalia’s army spokesman Capt Abdullahi Iman said the offensive involving thousands of troops will try to push al-Shabab fighters out of their strongholds in the Lower Shabelle and Middle Shabelle regions where many deadly attacks on Somalia’s capital, Mogadishu, and on Somali and African Union bases have been launched.

The extremist group has not commented on the truck bombing last Saturday, which Somali intelligence officials have said was meant to target the city’s heavily fortified international airport where many countries have their embassies.

The massive bomb, which security officials said weighed between 600 and 800 kilograms (1,300lbs and 1,700lbs), was instead detonated in a crowded street after soldiers opened fire and flattened one of the truck’s tires.

Somalia’s information minister Abdirahman Osman said 56 people were still missing. Another 228 people were wounded, and 122 had been airlifted for treatment in Turkey, Sudan and Kenya.

Protesters march as they carry placards reading “Out Al Shabab”, left, and “Oh God, have mercy on the dead” near the scene of Saturday’s massive truck bomb (Farah Abdi Warsameh/AP)

“This pain will last for years,” said a sheikh leading Friday prayers at the bombing site, as long lines of mourners stood in front of flattened or tangled buildings.

Since the election of the country’s Somali-American president in February, the government has announced a number of military offensives against al-Shabab, Africa’s deadliest Islamic extremist group, only to end them weeks later with no explanation.

Experts believe that has given the extremists breathing space and emboldened them in their guerrilla attacks.

Somali officials did not give details on what role the US military might play. 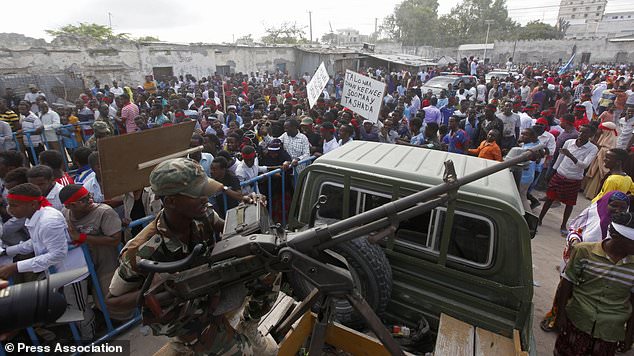 The US has stepped up military involvement in the long-fractured Horn of Africa nation since President Donald Trump approved expanded operations against the group early this year.

The US has carried out at least 19 drone strikes in Somalia since January, according to The Bureau of Investigative Journalism.

The latest US drone strike occurred Monday about 35 miles south-west of the capital, the US Africa Command said. It said it was still assessing the results.

Earlier this week, in response to questions about the massive truck bombing, a Pentagon spokesman said the United States has about 400 troops in Somalia and “we’re not going to speculate” about sending more.

In April, the US announced it was sending dozens of regular troops to Somalia in the largest such deployment to the country in roughly two decades.

The US said it was for logistics training of Somalia’s army and that about 40 troops were taking part.

Weeks later, a service member was killed during an operation against al-Shabab. He was the first American to die in combat in Somalia since 1993.