Stay in Bologna for under £100 a night

There’s something addictive about Bologna, with its long porticoed streets, sun-baked squares, cavernous churches and labyrinthine lanes dotted with bars and cafes.

It is home to the western world’s oldest university (dating from the 11th century) and there are tremendous towers that make the mind boggle.

The capital of the Emilia-Romagna region retains a delightfully sleepy feel — perfect for a lazy weekend.

Close to the campus, this small hotel with 22 smart rooms is on a narrow street with pink and ochre old buildings. It’s popular with parents visiting children attending the university, but it also suits those after simple lodgings in a central location. B&B doubles from £82 (hoteluniversitybologna.com)

Don’t let the chain-brand name put you off. This is in an ancient building converted into a functional hotel with original features such as arches and pillars. The rooftop terrace has views of Bologna’s leaning towers. Rooms are modern and spacious.

This friendly little hotel is on a tiny street busy with bakeries, wine merchants, fishmongers and antique shops. It’s in the heart of the city, just off the Piazza Maggiore. The 20 rooms are colourful and restful; the best tucked away on the top floor with exposed beams. Beware the steps to the first-floor reception. B&B doubles from £90 (albergodrapperie.com)

Even closer to Piazza Maggiore, this hotel lives up to its name with eye-catching art and slick public areas with sculptures and mirrors. Some rooms have views of the piazza and the hills beyond the city. Rates can creep over £100, but if you book in advance, the cheapest deals are available. B&B doubles from £94 (art-hotel-orologio.com). Prices can fluctuate.

Set on quiet street with some tables on a long terrace. Great pizza, grilled beef with rosemary, lasagne, seafood spaghetti and lobster are among main courses. Ristoranteninobologna.it

It can get busy at this popular tapas bar just off Piazza Maggiore. Select tapas from a cabinet at the back of the bar (about £2.50 a go) and the friendly waiters bring them to you: olives, cheeses, hams and pizza slices. A great spot to unwind. 7 Via Massimo d’Azeglio

For delicious chocolate, rum, lemon or pistachio ice cream, seek out this much-loved maker of gelato, just north of the centre. One scoop £1.30. Galliera49.it 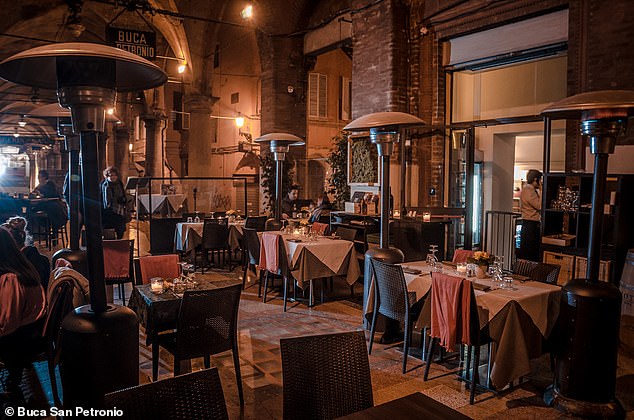 Bologna is known as La Grassa – ‘the fat one’ – for its generous helpings of pasta. Buca San Petronio pictured above

In a small shaded courtyard, this jolly restaurant has outside tables which are lovely on a balmy evening. Pasta offerings include lasagna, tortellini with ragu and ravioli with asparagus. £15-£20 for two courses. Bucasanpetronio.it

WHAT TO SEE AND DO

Free entry to the Basilica

Wander into San Petronio Basilica and marvel at this fine red-brick church, dedicated to the city’s 5th-century bishop, St Petronius. It has pride of place on Piazza Maggiore and was originally planned to be bigger than St Peter’s in Rome. When Catholic authorities heard of this, however, funds were diverted. It’s still pretty massive: 132m long, 60m wide and 45m tall.

OK, so this is not free — a ticket to ascend Bologna’s remarkable Torre degli Asinelli, a tower built for an important family in the 12th century, costs £4.30. Buy tickets at the tourist information centre on Piazza Maggiore, where you can choose a time slot. The 498-step ascent is invigorating (and tough), but what great views: the tower rises 97 metres and leans precariously westwards more than two metres. The setting is fabulous, with the Torre Garisenda almost alongside. 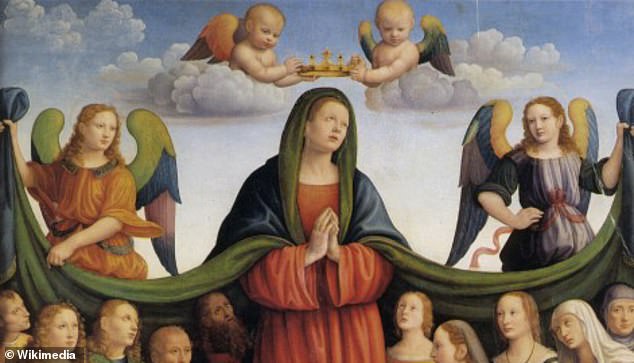 Masterpiece: Botticini Raffaello’s Madonna della Misericordia e donatori can be viewed at Bologna’s Pinacoteca Nazionale. A Bologna Welcome card allows entry to all the city’s main attractions including the contemporary art gallery and the archaeological museum

Bologna Welcome cards allow entry to all the city’s main museums and galleries, including the contemporary art gallery, the archaeological museum and Pinacoteca Nazionale (home to one of northern Italy’s most important collections of fine art). There are more than 50 museums and galleries in all. The card also includes a walking tour (£21, bolognawelcome.com). Another version includes a train ride, an ascent of the Torre degli Asinelli and other benefits, and costs £34. They can be purchased at the tourist office on the main square or online.

Bag a bargain at the market

Head to Piazza VIII Agosto on Saturday to browse dozens of stalls offering cut-price clothes, shoes, and arts and crafts. It’s a higgledy-piggledy affair with all sorts of great deals. For more information on antique and vintage markets see bolognawelcome.com.

Check out a street stall 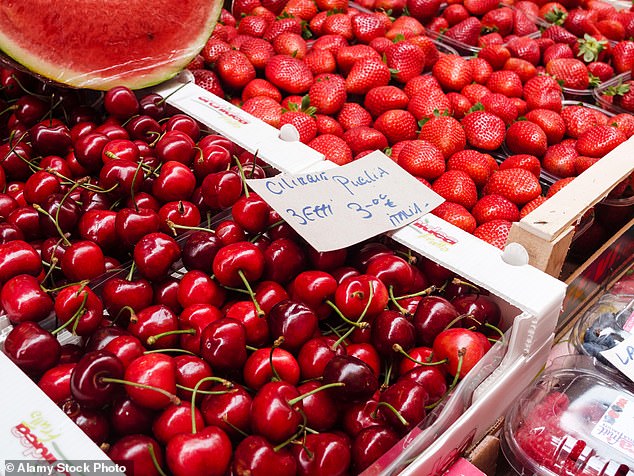 A ruddy selection: Cherries, strawberries and watermelon are among the healthy offerings in the markets in Bologna

The Quadrilatero district just off Piazza Maggiore is full of delightful food stalls and kiosk-like cafes in its tangle of tiny streets. It was here that the craft guilds of the city such as goldsmiths, butchers, fishermen, salaroli (workers who salted meat to preserve it), the furriers, barbers and the painters were all based from medieval times. Go a little further eastwards and you are soon in the university district, which is great for ice creams, cheap pizzas and food stalls selling tapas, salads and pasta with ragu. Bologna is known locally as La Grassa (‘the fat one’) and you soon find out why. Pasta with ragu (not spaghetti bolognese!) is usually about £5-£10.

Get lost on a ramble

Bologna is flat and it’s a pleasure simply to walk beneath the miles of porticos (25 miles in total and remarkably cool even on a baking day). Explore little neighbourhoods and stop off at a cafe for an 85p espresso or a £1.70 glass of wine or beer.