Its shares are suspended from trading in London, but have not been booted off the prestigious exchange.

The sanctioning of Deripaska, who has been instrumental in forging ties between Russia and MPs, will raise questions about why it took so long for prominent Britons on En+’s board to quit.

Lord Barker, a former energy minister, finally gave up his £3million-a-year job on Monday despite vowing to stay in the role just days earlier.

And Joan MacNaughton, another British director, only stepped down last weekend. 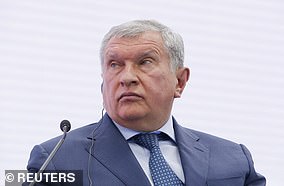 As the boss of state-backed Rosneft, the world’s largest publicly traded oil and gas company, Sechin is a ‘particularly close and influential’ ally of Putin, according to the Foreign Office.

Sechin, 61, became close to Putin during the Russian leader’s time as deputy mayor of St Petersburg in the 1990s, serving as his chief of staff.

Rosneft is yet another whose shares hold a secondary listing on the London Stock Exchange, and while they are suspended, they have not yet been booted off.

As the president of Russia’s second-largest lender, VTB, 65-year-old Kostin is under close scrutiny. 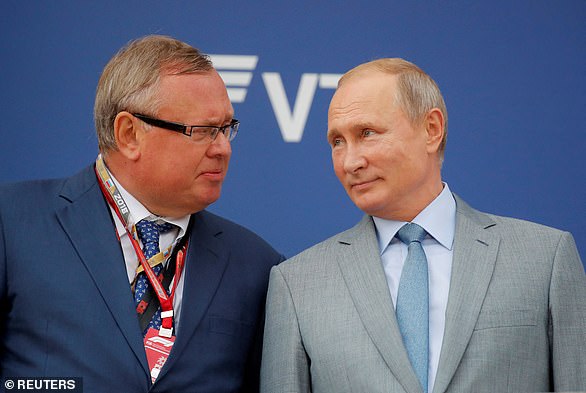 The Kremlin owns 60.9 per cent of VTB, and that makes Kostin ‘involved in supporting the Government of Russia’, says the Foreign Office.

The businessman, who suggested at World Economic Forum in Davos four years ago that further sanctions on Russia would be ‘economic war’, is a former politician with close links to Putin. 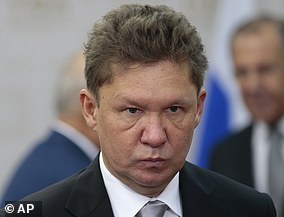 Alexei Miller has been chief executive of Gazprom since 2001

Born in St Petersburg to a Russo-German family, Miller also fell into Putin’s inner circle serving under him during his time as deputy mayor.

Miller has been chief executive of Gazprom, Russia’s largest energy producer, since 2001.

The sanctioning of Miller, 60, will deal another blow to Russia’s energy sector, which accounts for a major proportion of the country’s economy.

Gazprom’s shares are also suspended from trading on the London Stock Exchange.

Slapping on the sanctions, the foreign office noted the company had delivered gas to Crimea which was annexed illegally by Russia in 2014.