Stephen Curry returned from a six-game absence due to an injured right ankle only to go down again. This time, it’s his left knee.

Curry came back and scored 29 points before spraining his knee in the second half, and the banged-up, undermanned Golden State Warriors held off the Atlanta Hawks 106-94 on Friday night.

The Warriors confirmed Curry sprained his medial collateral ligament and has been scheduled for an MRI on Saturday. 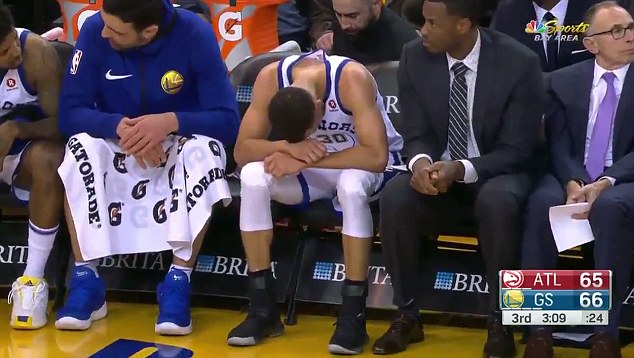 ‘It’s a little sombre in there. Everybody feels for Steph,’ coach Steve Kerr said. ‘He’s in good spirits. I did talk to him. He’s disappointed. That’s part of it.’

Curry grimaced as he hopped around and made it to the bench on a tender left side with 3:09 left in third quarter after JaVale McGee fell over and the center’s right elbow appeared to pound into Curry’s left knee. The two-time MVP immediately sat in a chair and put his head down before going into the locker room.

Nick Young scored 24 points with six 3-pointers for the defending champions, who were already missing their other All-Stars – Kevin Durant, Draymond Green and Klay Thompson. 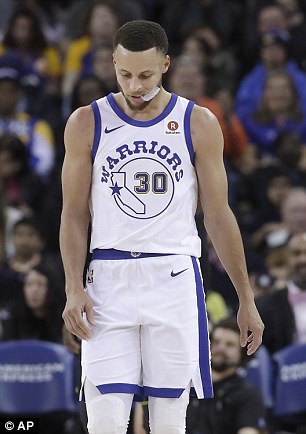 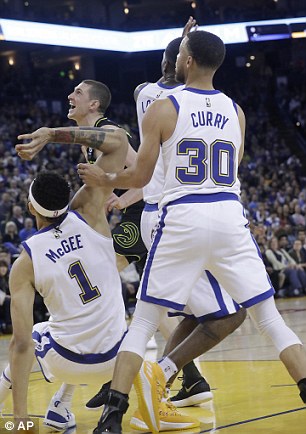 ‘Getting close to postseason, you don’t want to see nothing like that,’ Young said.

Curry overcame a slow start in his return, shooting 10 for 18. He had rolled the ankle at Atlanta on March 2 but initially kept playing before re-injuring it again.

When asked what he expected of Curry in his first game back, Kerr quipped: ’52 points. I have seen Steph come back from injury and nothing would surprise me.’

Curry began 1 for 6 and missed his first four 3s before connecting 62 seconds into the third. His 3 at 5:53 in the third pulled the Warriors within 60-56 then he converted a go-ahead four-point play with 3:03 left in the third. Soon after, his night was done.

Durant missed his fourth straight game with a broken rib while Thompson sat out a fifth in a row with a fractured right thumb. Green has a pelvic contusion. The teams combined to miss their first 16 3-pointers – the Hawks 0 for 9 and Golden State 0 of 7 – before Atlanta’s Taurean Prince made the first shot from deep at the 9:21 mark of second quarter. Young hit the Warriors’ first 3 with 4:24 before halftime.

Quinn Cook contributed 13 points, eight rebounds and six assists off the bench on his 25th birthday, helping the Warriors to a seventh straight win over the Hawks and 12th in 13.

Prince led Atlanta with 20 points. Dennis Schroder, who rested Thursday night in a loss at Sacramento, was back for Atlanta and scored 16 points. He briefly went to the locker room with 11:23 remaining in the game before returning for the Hawks, who have lost eight of nine.

He missed two key free throws with less than five minutes to play and his team down four. 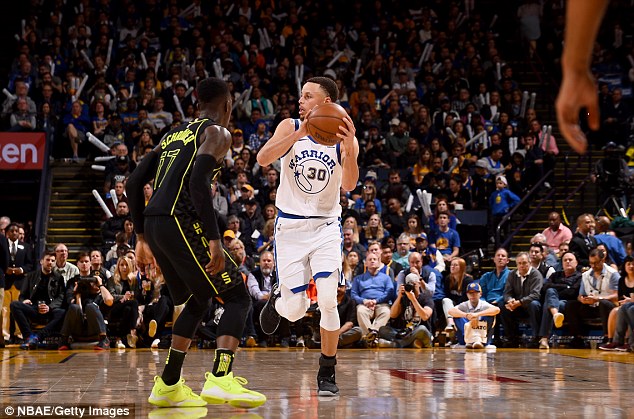