STEPHEN GLOVER: Why in God’s name is former Tory PM Sir John Major trying to disgrace a serving one?

We live in tumultuous times. Nevertheless, I don’t believe that any former prime minister has ever taken the stand to inflict damage on an existing PM of the same party.

But that is what is expected tomorrow, when Sir John Major may step forward in the Supreme Court in the action he’s bringing against Boris Johnson over the prorogation of Parliament.

Why is he doing it? Let’s give Sir John the benefit of the doubt, and accept that he is a principled Remainer who believes a No Deal Brexit would be a disaster for the British economy.

In fact, judging by his statements over recent years, he thinks Brexit in any shape is a very bad idea, and bitterly regrets the 2016 referendum result.

Sir John has long been strongly pro-EU and, as a Conservative Prime Minister in the Nineties, successfully fought off attempts by Tory backbench Eurosceptics to scupper the Maastricht Bill, which significantly enlarged the powers and scope of the EU.

All this is fair enough. Sir John is entitled to his views, which have the virtue of being consistent and deeply felt. Whatever else, his behaviour is neither cynical nor self-serving.

But why in God’s name is he doing his utmost to disgrace a Tory Prime Minister, and thereby possibly pave the way for a hard-Left government led by Jeremy Corbyn? For that would be a likely outcome of the case he and anti-Brexit campaigner Gina Miller are bringing.

Sir John (left) is entitled to his views, which have the virtue of being consistent and deeply felt (right: Gina Miller)

Imagine, for a moment, that the 11 judges of the Supreme Court decide that Mr Johnson’s prorogation of Parliament was illegal. Most observers think this eventuality unlikely, but only a fool would rule it out. After all, three senior Scottish judges have already come to this conclusion.

Being only human, the 11 judges can’t fail to be impressed by the role of a former prime minister in this case. With Sir John on board, the arguments against Boris Johnson will surely be more formidable than they would have been if made by Gina Miller alone.

Easy though it may be to poke fun at Sir John as an ineffectual prime minister, his mere holding of the office will undoubtedly lend him stature in the eyes of the judges. The involvement of the ex-PM could be decisive.

If the judgment goes against Mr Johnson, his already precarious position would be undermined. The Opposition would re-double its accusation that he is riding roughshod over the British constitution, and bending the rules to his political advantage. In short, that he is not to be trusted.

I expect the Prime Minister would survive such an outcry, at any rate in the short term. But the likely consequence is that he and the Government would be gravely weakened, and that the prospects of a Corbyn-led government much enhanced.

Doesn’t Sir John Major fear that? Presumably as a life-long Tory he won’t relish the idea of self-declared Marxist John McDonnell being put in charge of the economy. I’ve little doubt he recognises that such an outcome could be catastrophic.

One can therefore only suppose that he believes Mr Johnson’s prorogation of Parliament – which has resulted in the loss of only between five and seven days of sittings – was such an unprecedented outrage that it trumps all other considerations.

In that case, Sir John must be a huge hypocrite. Although it appears to have slipped his memory, he was himself responsible for proroguing Parliament for 19 days as Prime Minister in 1997. 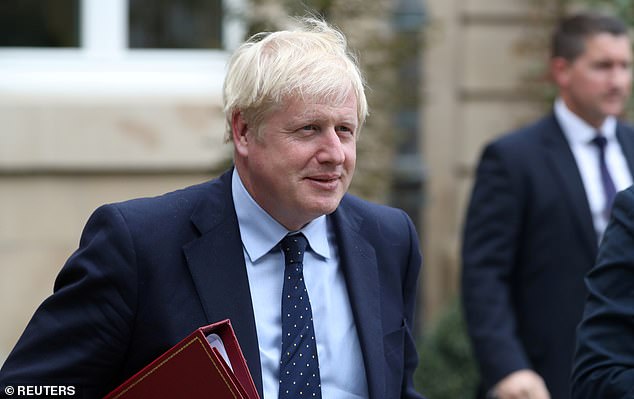 Being only human, the 11 judges can’t fail to be impressed by the role of a former prime minister in this case. With Sir John on board, the arguments against Boris Johnson will surely be more formidable than they would have been if made by Gina Miller alone

That suspension had the effect of delaying a highly critical report into Conservative MPs taking bribes until after the general election. In the event, Sir John and the Tories were wiped out by Tony Blair’s New Labour, but he cannot have known this would happen when he prorogued Parliament.

In both instances, prorogation was a matter of politics. One can decry this. Or one can say this is the way governments operate. In 1948, Clement Attlee’s Labour administration prorogued Parliament in order to sideline Tory peers who had opposed a key Bill.

It is galling to watch a former proroguer such as Sir John Major getting on his high horse to claim that Boris Johnson has done something inexcusable when he has been guilty of exactly the same behaviour.

Interestingly, his former No 10 spokesman, Sir Christopher Meyer, yesterday teased him on Twitter, wondering what the Supreme Court judges would make of these inconsistencies. He expected them ‘to have the wit to put him through the wringer’.

There’s nothing wrong, of course, with Sir John being a convinced Remainer. What’s hard to swallow is his apparent concealment of his motives in legal rigmarole and moral grandstanding.

Incidentally, Sir John was so ill-prepared for his case that in July he compared Boris Johnson to Charles II, who he claimed came unstuck when he prorogued Parliament ‘in the 1640s, and it didn’t end well for him’.

In fact, it was his father, Charles I, who came unstuck – ending up being beheaded – after suspending Parliament in 1629. For 11 years. Not just for a few days, as Mr Johnson has done, and which has led Lib Dem leader Jo Swinson to describe him as a dictator. What madness! Sir John is not just guilty of gargantuan hypocrisy, and potentially opening the door to a Corbyn government, whose policies would, in the view of many observers including myself, make No Deal seem like a picnic.

The Supreme Court case is also sucking up government time and energy when Mr Johnson and his colleagues should be straining every sinew to negotiate a deal that will honour the outcome of the referendum while safeguarding the economic interests of this country.

And if the judges should rule against the Government, what likelihood is there that it would be able to pick up the pieces and get the show firmly back in the road? Very little, I should have thought.

It challenges credulity that Sir John, of all men, should show such little sympathy for Mr Johnson’s predicament. For months, he and his government were besieged by Eurosceptic guerrillas in the Commons attempting to defeat the Maastricht Bill.

Now the former victim of parliamentary ambushes turns out to be more ruthless and unforgiving than his erstwhile most merciless persecutors. Why can’t he find it within himself to give Boris a chance?

Because he is a Remainer, I suppose. But not a generous, open-hearted one. Not an imaginative figure attempting creatively to plot a way through our dreadful difficulties, but a destructive and divisive force.

When he might be playing the part of an elder statesman, trying to bridge the huge gulf that separates our country, this former prime minister has confirmed his reputation as a man who is both irredeemably petty and partisan.