Sterling slides after figures reveal UK public borrowing hit £11.8bn in August ahead of a tax-slashing mini-Budget, with a stamp duty cut now rumoured too

Sterling tumbled to a fresh 37-year low against the US dollar on Wednesday after official figures revealed that public borrowing in August was nearly twice as much as forecast.

The pound fell as much as 0.42 per cent to near $1.1349 after Office for National Statistics data showed UK public sector borrowing hit £11.82billion last month, against the agency’s May forecast of £6billion.

The figures came as new Prime Minister Liz Truss’s Chancellor of the Exchequer Kwasi Kwarteng prepares to go for growth and deliver a tax-cutting mini-Budget on Friday, with expectations that stamp duty on home purchases may also now be cut.

Soaring inflation also meant that interest payments on UK government debt hit £8.2billion during the month, which is £1.5billion more than August 2021, the highest monthly figures since April 1997, and significantly higher than forecasts of £4.9billion. 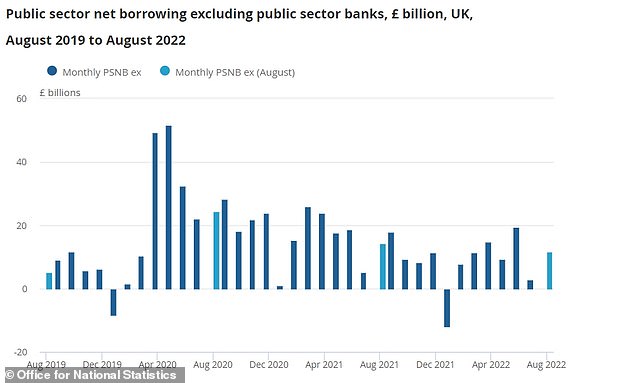 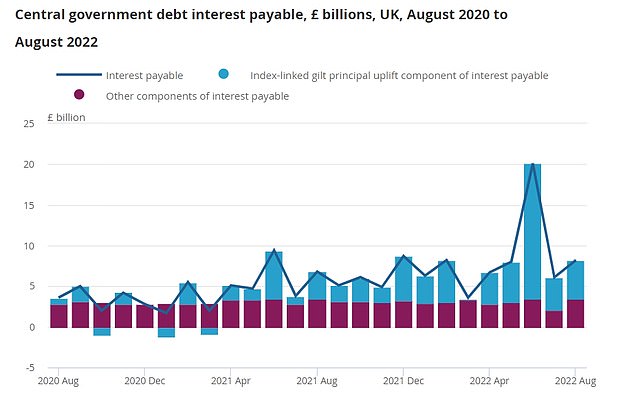 The ONS said: ‘Since mid-2021, the cost of servicing central government debt has increased considerably.

August borrowing left public sector net debt at roughly £2.43trillion at the end of the month, which is around 96.6 per cent of GDP, and an increase of £195.2billion on the same time last year.

The figures will deepen concerns that Liz Truss’s new government’s commitment to ramp up fiscal support for households and businesses against the cost of living crisis has the potential to damage public finances.

Chancellor Kwasi Kwarteng will on Friday will set out more details of the Government’s energy support package and proposed tax cuts.

Meanwhile the Bank of England will make a decision on interest rates on Thursday, with markets now expecting a bumper 75 basis points jump to 2.5 per cent as the bank attempts to get inflation under control. 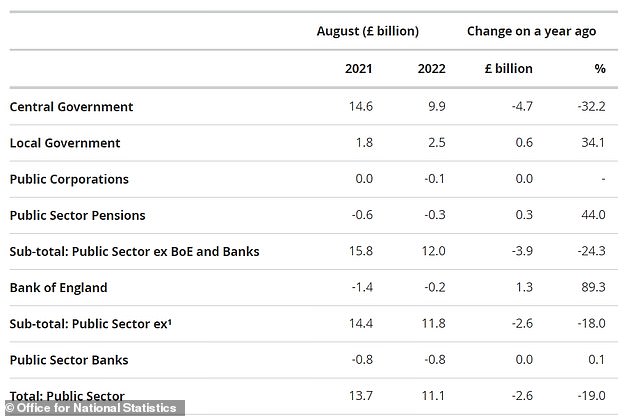 While consumer price inflation is sky high at around 10 per cent, the latest figures from the ONS did not deepen concerns about stumbling economic growth. The BoE has previously forecast that the UK will enter five consecutive quarters of recession from next month.

Tax receipts of £69.9billion in August marked only a slight miss from the Office for Budget Responsibilities forecast of £70.5billion.

In response to the latest figures, Kwarteng said: ‘I have pledged to get debt down in the medium term. However, in the face of a major economic shock, it is absolutely right that the government takes action now to help families and businesses.

‘Our priority is to grow the economy and improve living standards for everyone – with strong economic growth and sustainable public finances going hand in hand.’