This bust of 18th century lawyer Richard Stockton has been removed from Stockton University. Stockton was a slaveholder and also signed the Declaration of Independence

Stockton University has removed a bust of its namesake – slave-owner and signer of the Declaration of Independence Richard Stockton – amid country-wide arguments over statues of racially troubling figures.

The removal of the bust from the university’s library was announced last week by Harvey Kesselman, president of the university, Press of Atlantic City reported.

In an open letter to the public he promised that it would return once ‘an appropriate safe and secure public space’ was decided upon in a meeting scheduled for today.

Stockton was a lawyer, jurist and slaveholder – the latter making the presence of his bust something of a worry for the faculty amid nationwide protests over figures with racially unsavory pasts.

But Kessleman told the Press that conversations about the statue were not new at the university. ‘If you look in our 40th [anniversary, in 2009], you’ll see that the discussion began to take place then,’ he said.

He added there had also been concerns about Stockton connection stretching back to the university’s founding in 1969. It was named after him because of his prominence on the Declaration of Independence.

The bust ‘was never was placed in context and I think that’s the most important thing about this,’ Kesselman said.

With that in mind, his letter to the university promised that the ‘temporary relocation of the Stockton bust… will include a panel exhibit that explains how and why we are undertaking this research initiative at this time.

‘They will then lead the effort to develop a comprehensive Richard Stockton Exhibit,’ he said.

He described that as ‘a larger installation that will be complemented with educational activities that may include panel discussions, guest lectures, and the creation of a course on Richard Stockton.’

For some it all seems a bit much.

Dylan Perry, a Stockton senior from Upper Township, said: ‘I really never heard anyone make a comment or complaint about Richard Stockton.

‘I do know he was a signer of the Declaration of Independence and otherwise not much is known about him. But I think removing the bust is an overreaction.’

He continued: ‘The real problem in our nation is not statues of historical figures. Rather the problem is that we have people in our nation with hate in their hearts.

‘I understand we are in a PC era but removing statues will not change things.

‘Rather, addressing the feelings that caused those statues to be removed would be a good plan going forward. 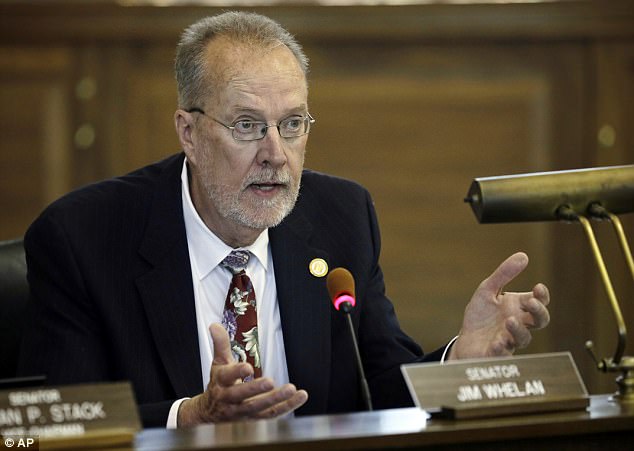 University president Harvey Kesselman said he planned to make an exhibit that would explain the context of Stockton’s life. Discussions are underway about what it will consist of

Kesselman said he expected resistance to the decision, but said that discussing matters such as there is an important part of university life – regardless of the points of view involved.

‘Particularly at public institutions of higher education, it’s a marketplace of ideas,’ he said.

‘One of the things that can happen is it is a place where people are able to express themselves hopefully in civil ways to discuss issues of relevance to them.’

Stockton’s provost and vice president for academic affairs, Lori Vermeulen, saw it as an opportunity more than a problem.

‘It’s a really great opportunity for a teachable moment, talk across differences, talk about different points of view,’ she said.

‘It’s really going to provide a good opportunity for our students and the community at large.’

The move comes amid heightened tensions over statues to racist figures – most notably in Charlottesville, where protests and counter-protests over the planned removal of a Confederate general’s statue spilled over into violence.

One woman was killed when a white supremacist at the rally drove into a crowd of counter-protesters on August 12. Some 19 others were injured.

Anger at Confederate statues has since spread into fury at depictions of colonial explorers – whom some characterize as invaders.

On Wednesday, a statue of Columbus – whose settling in the New World was coupled with horrific massacres and rapes, according to historians – was beheaded in a park in Yonkers.

THE UNIVERSITY PRESIDENT’S LETTER TO STUDENTS IN FULL

Dear Members of the Stockton Community,

The decision to temporarily remove the bust of Richard Stockton from our Library entrance has created the opportunity to engage in a discussion of the man, his role in America’s history, and how we might remember him today.

Accounts of the desecration and destruction of historical statues fill our news, and remind us that our nation is struggling with accepting multiple points of view, with interpreting facts, and with finding common ground.

We are hopeful that through the development of the Richard Stockton Exhibit we will demonstrate that difficult issues can be dealt with in a way that strengthens and unites us.

Accordingly, I have asked our Provost to establish a Richard Stockton Exhibit Committee. The exhibit will thoughtfully and objectively explore the life and legacy of our namesake.

The initial meeting of the steering committee* will take place this Wednesday as they begin the planning process.

Their first task is to recommend an appropriate safe and secure public space for the temporary relocation of the Stockton bust, which will include a panel exhibit that explains how and why we are undertaking this research initiative at this time. This will be completed expeditiously.

They will then lead the effort to develop a comprehensive Richard Stockton Exhibit, a larger installation that will be complemented with educational activities that may include panel discussions, guest lectures, and the creation of a course on Richard Stockton.

As we move forward, we welcome and encourage the participation of students, faculty, staff, alumni, and community members in this important endeavor. Many have already volunteered.

We hope that you will support us as we embark on this new chapter in Stockton University’s history.

*The Steering Committee of the Richard Stockton Exhibit Committee will be comprised of key institutional leaders including the Presidents of the Faculty Senate, Stockton Federation of Teachers, and Student Senate, and our Student Trustee. It will also include our Dean of General Studies, our Associate Vice President for Academic Affairs, and our Associate Provost for Strategic Planning, Academic Planning & Assessment.