The FDA has issued a warning snorting chocolate powder can cause serious health problems and encourages minors to do illicit drugs.

Senate minority leader Chuck Schumer of New York wrote to the Food and Drug Administration earlier this year, demanding an investigation into the chalky chocolate, calling it ‘cocaine on training wheels,’ in a statement.

The FDA said in its letter that Coco Loko contains ingredients that should classify it as a drug and that it is marketed in a way that encourages drug use for minors.

The FDA warned the makers of Coco Loko, a snort-able chocolate powder that their product is dangerous to consumers and encourages minors to use drugs

The administration told parent company Legal Lean that it must take action within 15 business days to correct its regulatory violations for Coco Loko and another product.

When it came out, doctors warned that Coco Loko, which is sold on Amazon for $18.47, posed a risk to sinus health because it contained sugar and could obstruct airways.

The site even suggestively describes powder’s effects as ‘a state of euphoria similar to the feeling of ecstasy.’

Its familiar-sounding name has  also drawn comparisons to the caffeinated alcoholic beverage, Four Loko, which the FDA found encouraged binge drinking (though the products are unrelated).

Now, the FDA has done exactly what Schumer called for, and found that Coco Loko and another product, the Legal Lean Syrup, could do damage far beyond stuffing up noses.

The US government gives approval to certain products and ingredients for use only in specific ways. 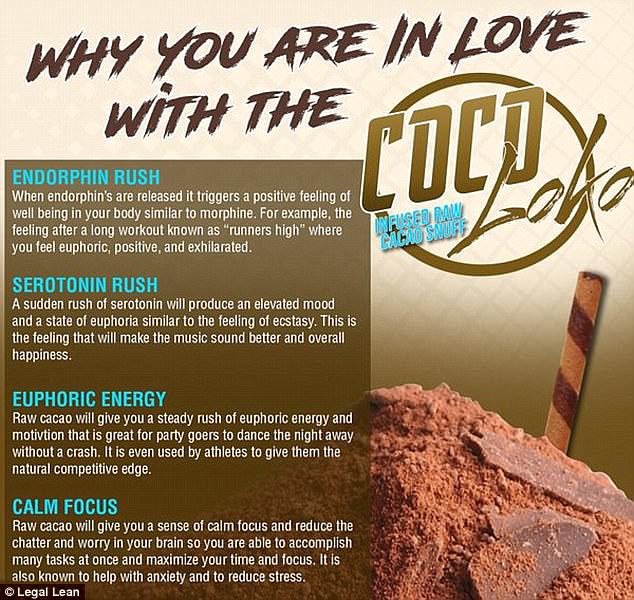 Coco Loko’s main ingredient is ingredient is raw cacao powder (as advertised), but it also contains taurine and guarana, which are widely used in energy drinks, but, as the FDA’s letter notes, these are not approved for intranasal administration – in other words, snorting.

Legal Lean labeled Coco Loko a food, but the FDA’s letter calls out the obvious: food is not consumed through the nostrils, but Coco Loko is.

The letter warns that snorting chocolate can cause vocal cord spasms, airway spasms and can induce asthma attacks.

The company did not disclose that its Legal Lean Syrups – the company’s legal take on the high-inducing ‘purple drank’ popularized by Lil’ Wayne – contain an active drug ingredient, called doxylamine, an antihistamine that also acts as a short term sedative.

The drug is not supposed to be used while drinking and shouldn’t be taken by people with breathing conditions or men with enlarged prostates, and the FDA said that ‘the inclusion of undeclared doxylamine in Legal Lean Syrup poses a potentially serious risk.’

The FDA’s letter does not represent charges against Legal Lean, but asks the company to notify the administration of the actions it intends to take to correct its violations and what it will do about the products it has already sold.