Stop whining! At least you have trains, JEFF PRESTRIDG told

Brian Collins, a reader from Flintshire, North Wales, has told me to stop whingeing over the poor train service I currently experience most working days on my commute into London from Wokingham.

I will moan no more other than to state that last Monday morning, my train was delayed by one hour and four minutes. Snow, not RMT’s Mr Lynch, was the issue this time around (I’ve been holed up in London ever since).

Brian says that for the past 60 years, he has had to cope with the fact that his local railway line, running from Chester to Denbigh, is no more. It shut to passengers on April 30, 1962.

He says: ‘I live in one of the large parts of the UK that has absolutely no rail service whatsoever. When our station closed, it became for a time a builders’ merchants, and latterly a Tesco store. Should I ever wish to use a train service I would first have to get a bus, or taxi or drive (and presumably have to pay through the nose for parking) to the nearest train station at least 20 miles away.’

He continues: ‘I have no experience of delays, leaves on the line or trackside fires because I haven’t used the train service in this country for over 20 years.

‘I did once entertain the idea of using the train to go to Edinburgh to see my niece’s one-woman show in the festival (Anna Morris since you ask), but when I found out what the price was, I flew there at a much cheaper rate and got the tram direct from the airport into the city centre, very convenient!’

He concludes: ‘For large numbers of the population the service you expect is not available and has not been since the Beeching cuts, and in our case even before that. So no, I don’t have a lot of sympathy for the plight of privileged Southern commuters with their oh so integrated transport system. You may have had to wait a while for a train, but I – and my fellow Northerners – have been waiting for a train to arrive at what was our station for the last 60 years.’

That’s put me in my place. All that remains is for me to wish you all a splendid Christmas and New Year. Irrespective of train delays, I’ll be back on New Year’s Day – and I promise not to whinge.

Will Metro be forced to trim its branches?

On the subject of banks, Metro Bank lost some of its sheen last week when it was hit with a £10million fine for publishing incorrect financial information back in 2018.

Challenger bank Metro broke the mould in 2010 when it became the first new high street bank to launch in more than 150 years. It invested heavily in building a branch network – with branches vast in size, welcoming and staffed with people ready to please.

Yet, since early 2019 when the bank first confirmed its accounting error, Metro has been more in retrenchment than gung-ho mode. Although it now has an impressive 76 branches, the bank hasn’t been immune from closures. In June, it shut its branch in Earls Court, West London – an outlet I would occasionally use, but which is now boarded up.

At the same time, it also axed branches in Milton Keynes, Buckinghamshire, and Windsor in Berkshire.

With a possible recession around the corner, and its shares trading at around £1.10 – a fraction of the £40 price they were commanding in 2018 – a further trimming of its flamboyant branch network cannot be ruled out.

Reader Robert Montgomery has spent the past 13 years taking photographs of bank branches, often just before they are axed. He’s travelled the length and breadth of the country by train in pursuit of his hobby, although RMT’s Mick Lynch has temporarily brought his activities to a halt.

Robert, who lives near Heswall on the Wirral in Merseyside, was employed as a junior clerk at NatWest for five years in his youth, working in six different branches in the Liverpool area. Although he then became a bus driver, he has never lost his love for banks.

The result is that the 68-yearold has accumulated a library of some 6,000 bank branch photos – and over the past year he has been kind enough to share some of them with me. 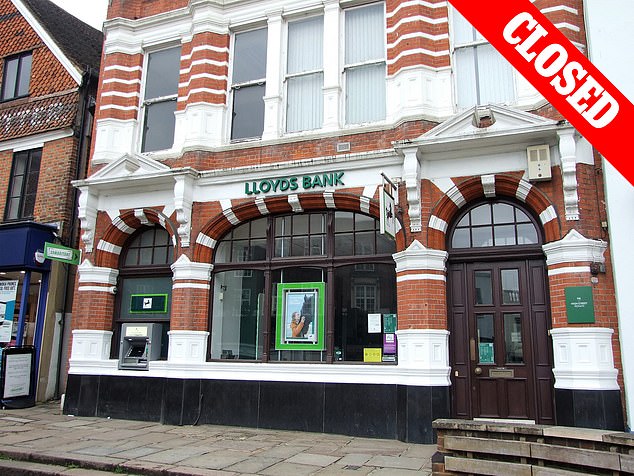 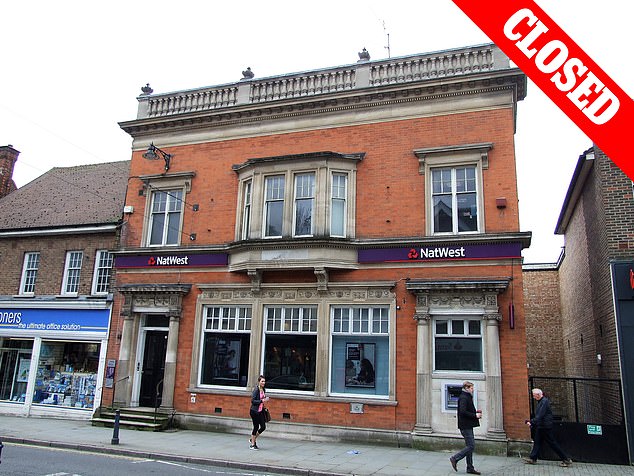 Bygone era: The Lloyds and NatWest branches in Reigate, Surrey

‘It’s a hobby,’ he told me last week. ‘I’m an inveterate collector and I am fascinated by banks, whether it’s the architectural beauty of some of the branches they run – or once ran – and the cheques they used to issue.’ I asked Robert to name his favourite (former) branches. They include the Lloyds and NatWest branches in Reigate, Surrey, that closed in August 2019 and June 2018 respectively. Magnificent buildings.

Although the Lloyds branch has since been transformed into a Gail’s bakery, the NatWest premises have yet to attract new tenants.

Despite being an affluent town with an abundance of independent stores, Reigate will lose HSBC – its last bank – in August next year.

The town will then be dependent upon the Post Office and Nationwide Building Society for high street banking. Barclays and Santander pulled out of Reigate at the beginning of the year and 2019 respectively.

Provided the trains start working again, Robert will continue his hobby into 2023. But with closures gathering pace – 619 already this year – his options for photo opportunities are declining rapidly. Keep snapping Robert.

Thank you for listening, Mr Bond…

NS&I boss Ian Ackerley is obviously an avid reader of The Mail on Sunday despite the criticisms we’ve levelled at his organisation in the recent past with regards to poor customer service.

Seven days ago, urged on by readers, I called upon Mr Ackerley to increase the prize rate on Premium Bonds which was standing at a rather unappealing 2.2 per cent. ‘Get your finger out and up the Premium Bond prize rate,’ I said. ‘A rate around the 3 per cent mark would do for starters.’

It seems the plea resonated with Mr Ackerley as he munched through his muesli (topped with banana) breakfast last Sunday. The result? An announcement two days later that it would indeed be increasing the prize rate to 3 per cent from January, meaning an additional £80million of monthly prizes available to bondholders. Although the number of monthly £25 prizes will reduce as a result of the move, more higher value prizes will be available. For example, the number of £50 and £100 wins will both increase by nearly 60 per cent.

Mr Ackerley says his organisation’s generosity is a ‘great way’ for bondholders ‘to start 2023’. Hopefully, the prize rate will ratchet up again at some stage to reflect the Bank of England’s decision last Thursday to push up interest rates to 3.5 per cent.

Thanks for reading the MoS, Mr Ackerley. Happy New Year to you.

Transferring the value of a defined benefit pension into a defined contribution plan has long been mired in controversy. Only last month, the City regulator announced a redress plan for former members of the British Steel Pension Scheme who received unsuitable advice from a clutch of preying financial advisers to transfer out.

Yet it seems such transfers are experiencing a slow death. According to pension consultant LCP (Lane Clark & Peacock), only 15 per cent of those who are currently seeking a transfer value are now acting upon them, one of the lowest take-up rates for more than seven years.

LCP says the drop-off in transfers is a result of a multitude of factors: greater regulatory scrutiny, a dearth of financial advisers prepared to arrange them, and less compelling transfer values (a function of high gilt yields). Its own analysis indicates that the average transfer quotation in the third quarter of this year was £252,000 – down from £330,000 in the previous quarter.

Defined benefit pension transfers can still prove worthwhile, especially for those in ill-health. There are also tax planning benefits. Yet for a majority of people, they are now firmly a no-go area.