A store clerk live streamed the death of a veteran cop on Facebook as he lay on the ground dying after responding to a call about a bad check where she worked.

Kashina Harper was working at Wellston Market in St. Louis, Missouri, when officer Michael Langsdorf responded to a call about someone paying with a bad check.

He was shot dead at the scene and the suspect fled.

Police now have Bonette Kymbrelle Meeks, 26, in custody and are charging him with the killing.

They say he tried to cash a bad check at the store and when Langsdorf arrived, the pair got into a fight.

Surveillance footage captured Meeks struggling with the cop then firing a single shot to the back of his head while he lay on the ground injured.

For two minutes before he was taken away from the scene in an ambulance, Harper filmed Langsdorf bleeding on the floor. 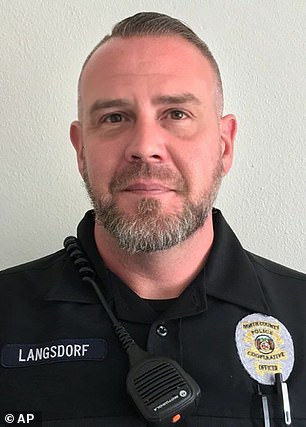 Kahsina Harper was working at Wellston Market in St. Louis, Missouri, when officer Michael Langsdorf was shot. She then filmed him lying on the floor and broadcast it on Facebook for two minutes

She broadcast it live on Facebook and has been inundated with abuse for doing so.

On Tuesday, the woman claimed she had already called for help when she started filming and that while she regrets it, she put her ‘life on the line too’.

‘I put my life on line too…I told the gunman do not shoot but he shot him anyway I ran from behind the counter, didn’t even know if the gunman have (sic) left to help the police officer,’ she said. 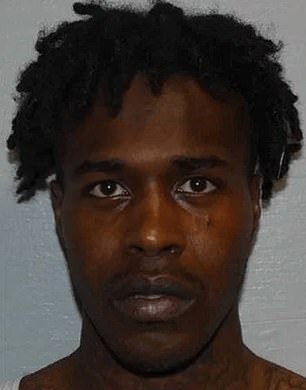 Suspect Bonette Kymbrelle Meeks, 26, shot him in the back of the head

‘I grabbed the police officer walkie-talkie and said the police just got shot can you please send somebody to help him… I was talking to him and telling him that he would be okay.

‘And only reason why I put it on Facebook for hims to get Justice. I didn’t know that he was going to die just wanted the gunman to see what he done to the police officer that’s all I didn’t try to hurt nobody (sic),’ she said.

‘You never know what you going to do. I didn’t even know what to do so if you blame me for that I don’t know what else to tell you but I’m sorry.

‘Maybe I should not put it on Facebook I apologized to the family and friends,’ she said.

In a Facebook post and in local media interviews since the shooting, she has apologized and said she did not know why she started filming.

The incident happened at 4.30pm on Sunday.

When the cop arrived, Meeks wrestled with him until they were both on the floor.

Then, with the cop straddling him, Meeks got his gun out from his waistband and pistol-whipped the cop, causing him to lose his balance and fall to the ground.

He then stood over him and shot him in the back of the head, according to authorities. 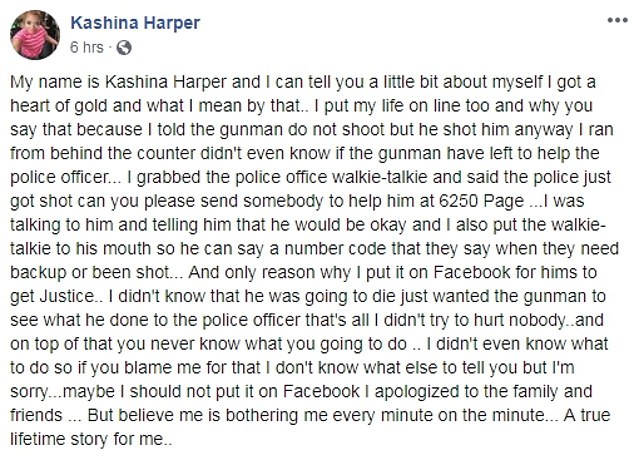 Harper’s social media pages have been flooded with comments from disgusted critics.

‘Unacceptable. If someone live streamed your friends or relatives death you’d be flipping out,’ one person said.

Among comments criticizing her are vile death threats, telling her to ‘burn in hell’.

She has also received messages of support, including some from the families of cops who say there can ‘never be enough video for a conviction.’

Facebook has come under fire in the past for the ways in which it polices its live streaming function. 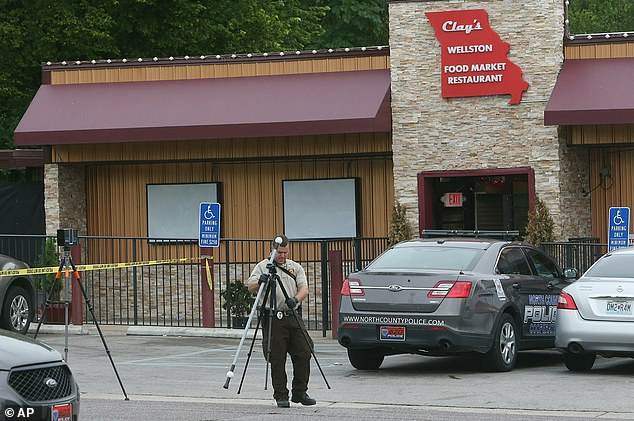 Harper was working in this market in St Louis, Missouri, when the shooting happened on Sunday

It has been used to broadcast terror attacks like the mass murder of Muslims at a Christchurch mosque in New Zealand, and dozens of people have committed suicide while streaming it.

Earlier this year, Mark Zuckerberg said he would do what he could to ensure inappropriate content stays off the site but he refused to consider disabling Facebook Live all together, saying it serves a purpose by bringing people together.

Langsdorf’s family have not yet spoken out about the Facebook video.

He was a father to 13-year-old daughter and 18-year-old son.

The family is now being offered support by Backstoppers, a volunteer group which provides financial aid to the families of police men and women who lose their lives in the line of duty.