Commuters face ‘Black Wednesday’ as they head to work this morning with Storm Gareth’s 80mph gusts and heavy rain set to cause havoc on the roads, railways and flight paths.

Danger to life weather warnings have been issued by the Met Office, which warns that fallen trees, flying debris and flooding could lead to widespread travel disruption and power outages until 3pm.

There are also 35 flood warnings in place, with five requiring immediate action in the north of England.

The RAC has warned drivers conditions will result in huge tailbacks and potential pile-ups, with 31,000 roadside call outs expected across the country today.

After an early racecourse inspection in Gloucestershire, officials confirmed Ladies Day at Cheltenham Festival will go ahead as planned.

London and surrounding areas of southern England will be the least affected by the chaos, with wind speeds peaking at 55mph and less rainfall.

Gareth arrived in the UK after travelling across the Atlantic from the west, where a deep low pressure system has resulted in the worst bout of weather since last year’s Beast From The East. 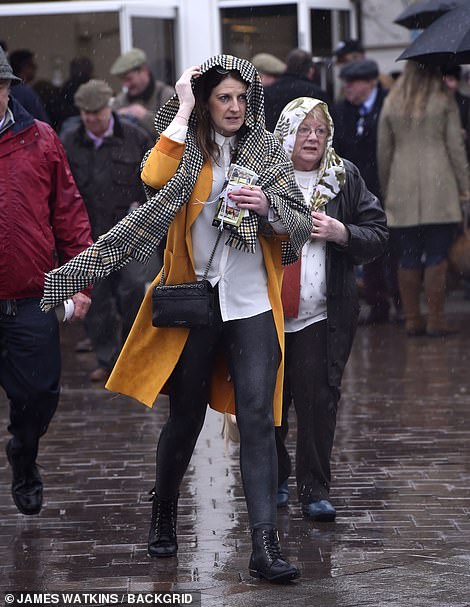 The Cheltenham racing festival is under threat because of Storm Gareth, after fans of the flagship festival in Gloucestershire battled against the elements on Tuesday (pictured) as the course suffered gales and washouts 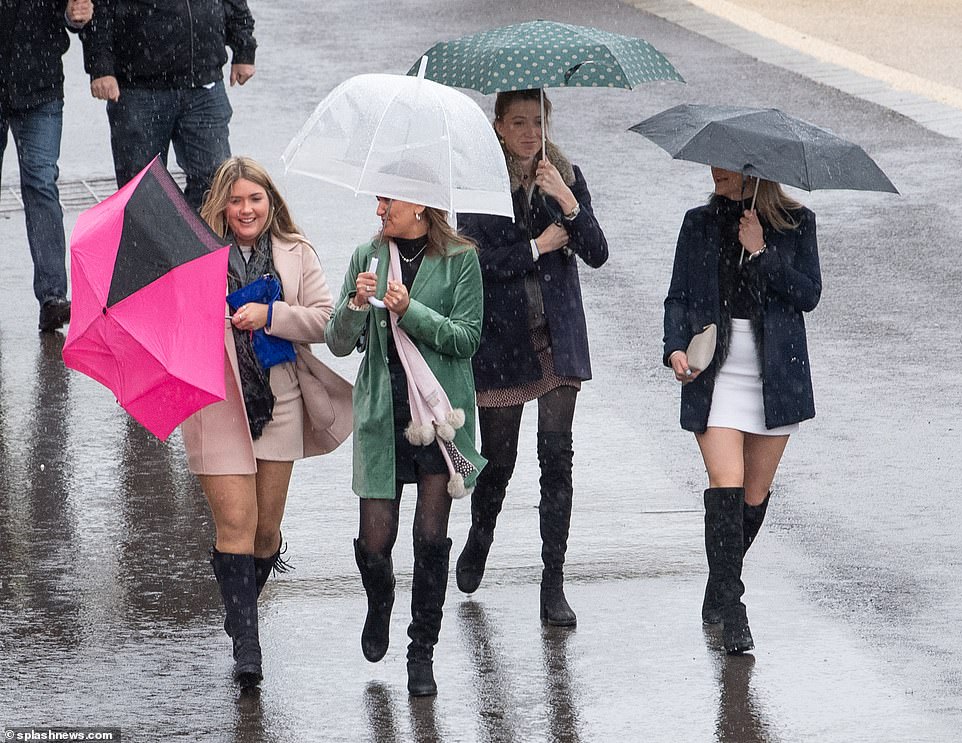 Gusts of up to 75mph were recorded in Scotland on Tuesday night, while winds of over 60mph were seen widely across western parts of the UK in the early hours of Wednesday.

Storm-force winds created ‘atrocious’ conditions for an operation to rescue six crew from a French fishing vessel off Land’s End.

Two RNLI lifeboats launched after the alarm was raised at 10pm on Tuesday, but waves of up to 20ft meant it was ‘impossible’ for a tow line to be attached and the crew were air-lifted off by the Newquay Coastguard Rescue Helicopter.

Storm Gareth is expected to continue moving across the country throughout the day, with the worst of the winds occurring in the early hours before gradually easing later on in the afternoon as the storm moves out to the North Sea.

Transport links were at risk of being impacted as the squally weather blows through.

Commuters using trains in Wales, Scotland, the north of England and East Anglia were warned that services could be disrupted by high winds during the morning rush hour, with speed restrictions in place across a wide area.

Trains between Durham and Newcastle were halted until at least 9am after overhead electric wires were damaged, impacting LNER, CrossCountry, Northern and Transpennine Express services.

Meanwhile, some Virgin Trains services between Manchester Piccadilly and London Euston and some trains between Glasgow Central and Preston were cancelled.

There were also reports of trees blocking roads and some exposed routes in the north-east of England being closed to high-sided vehicles. 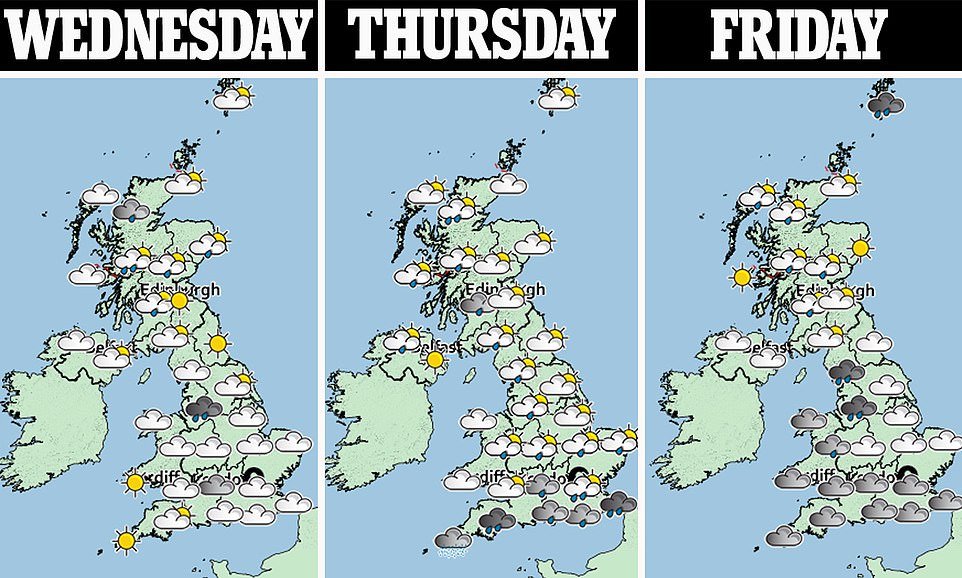 Environment Agency staff worked throughout the night in Cumbria and Lancashire to monitor rain and river levels, with the Met Office expecting up to 2.4in (60mm) of rain over higher ground in the north west.

The Met Office, who has issued warnings for all of Wales, large parts of England, the west coast of Scotland and Northern Ireland, also advised people to tie down or put away loose items in the garden and to take care outside.

Racegoers in Cheltenham narrowly dodged disappointment after an early racecourse inspection proved conditions were good enough for Day Two to go ahead as planned.

The festival in Gloucestershire has already suffered gales and washouts – hitting 250,000 racing fans attending over the four days from today until Friday, and officials still anticipating ‘challenging’ weather today. 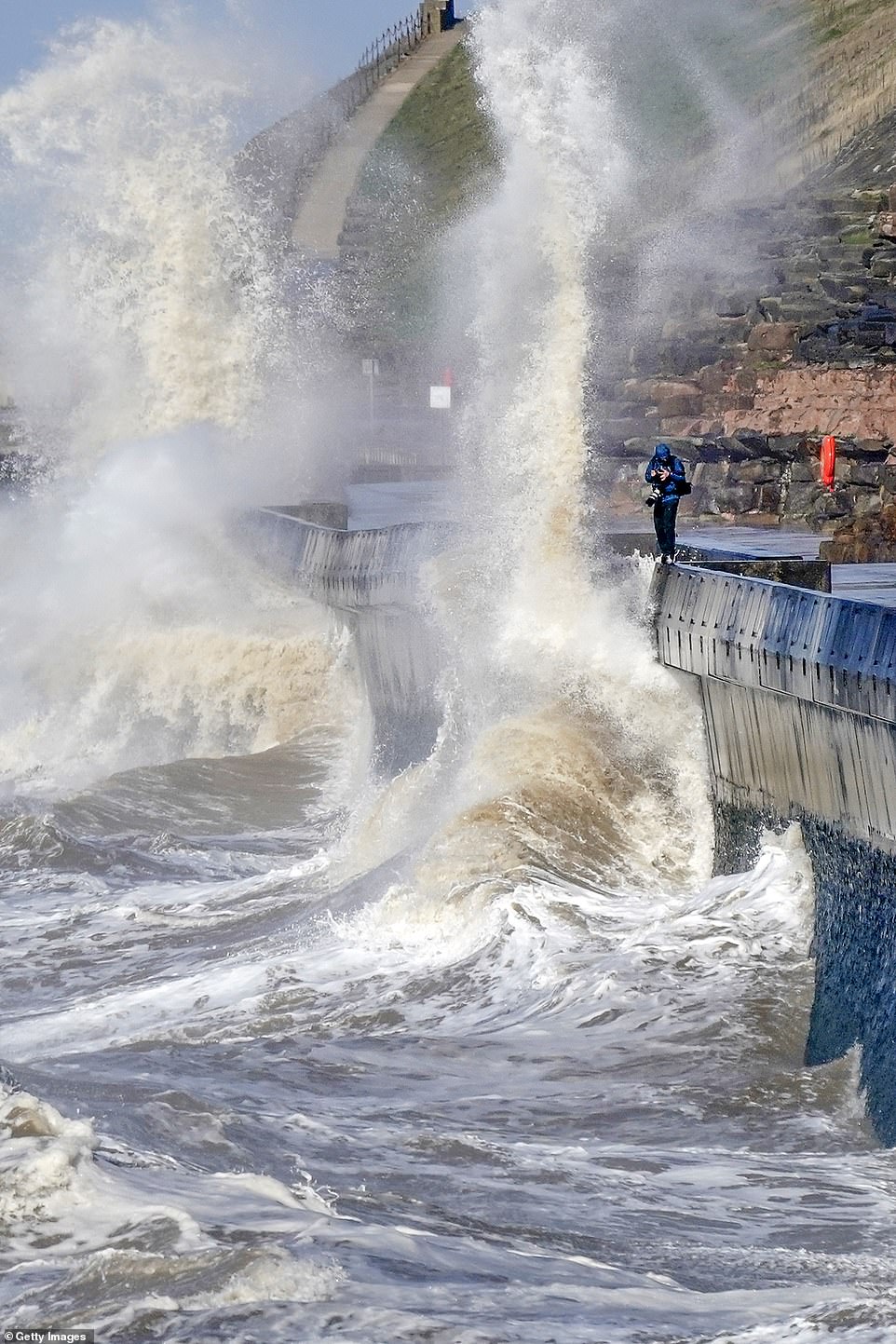 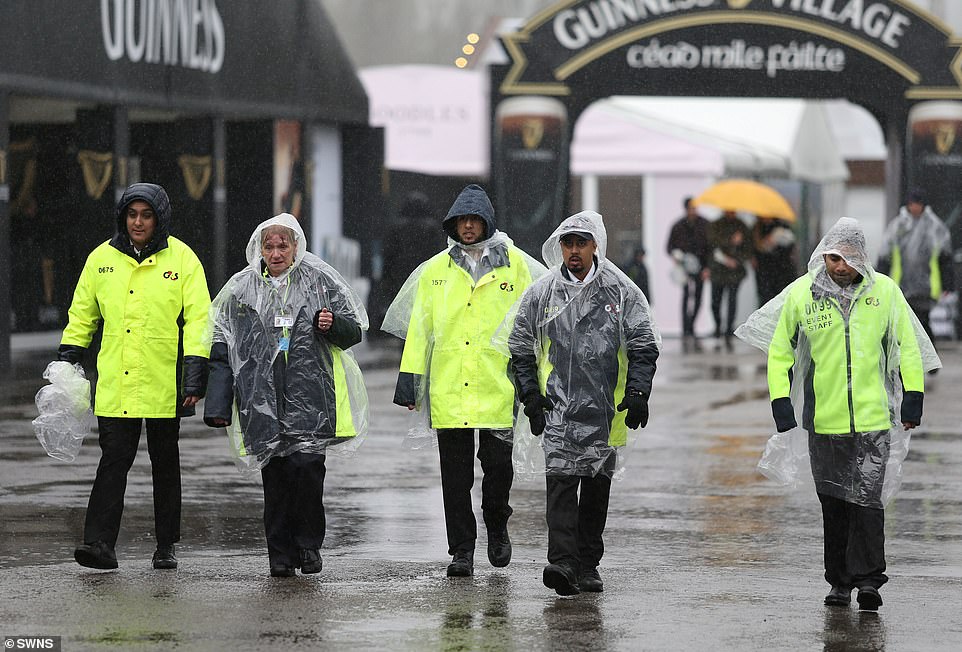 Security guards in the rain at the Cheltenham Festival, amid fears Ladies’ Day could be postponed 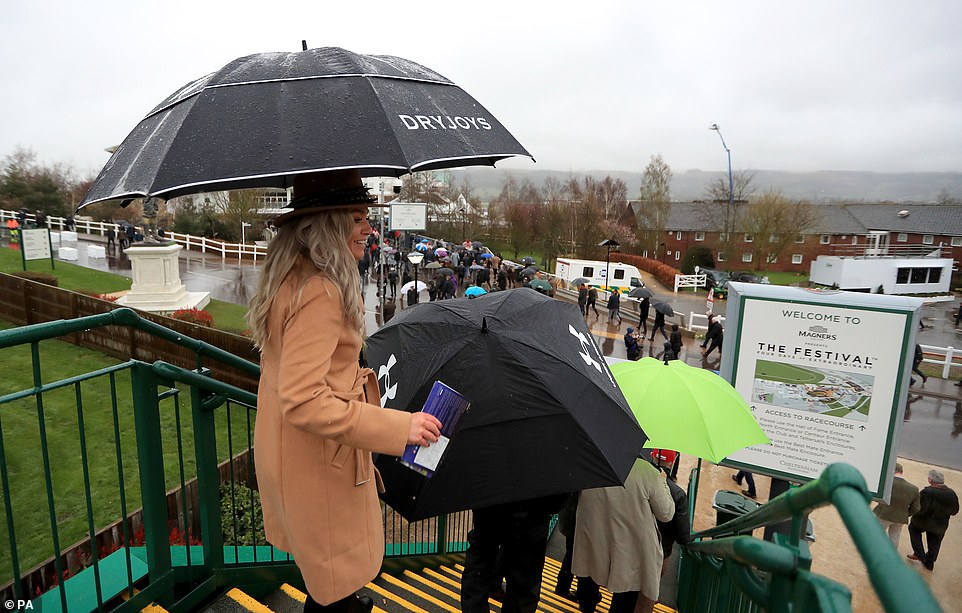 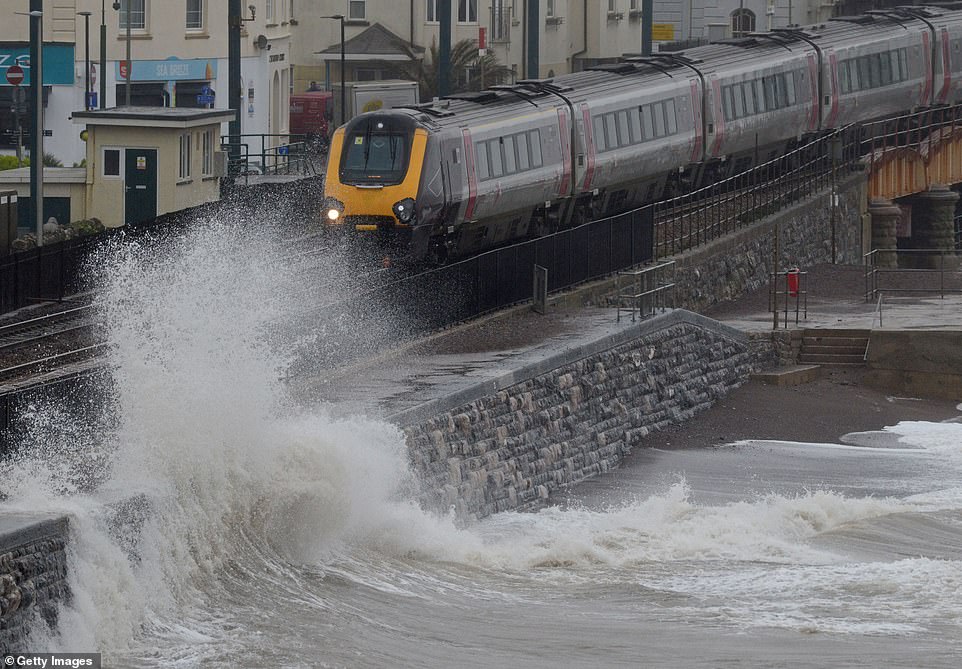 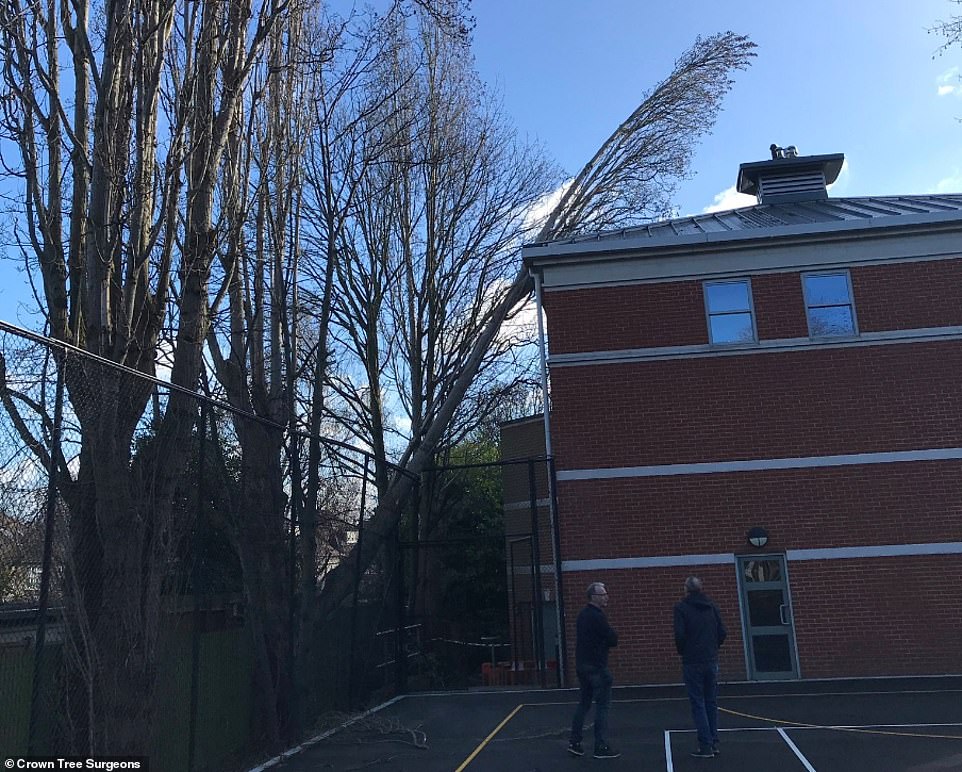 A tree on the roof of a school in Greenwich, South East London, today – with experts saying it had a large cavity at its base

A file picture of Ben Nevis, the UK’s highest mountain (2015)

Three people have died and another was injured after an avalanche on Ben Nevis, the UK’s highest mountain.

A police spokesman said: ‘Police Scotland is currently co-ordinating a mountain rescue response following reports of an avalanche on Ben Nevis this morning. Police were informed that the avalanche had occurred in Number 5 Gully area at around 11.50am.

‘Volunteers from Lochaber and Glencoe mountain rescue teams remain at the scene and were assisted by the Maritime and Coastguard Agency and Scottish Ambulance Service.’

The course is braced for ‘challenging’ weather conditions on day two of the showpiece meeting, with winds predicted to reach a peak of around 40 mph on Wednesday morning.

Ian Renton, director for the south-west region of the Jockey Club, said: ‘Strong gusting winds are forecast for the area on Wednesday, but their precise strength and location are not possible to predict in advance.’

Expanding on plans to move to Saturday rather than split races over Thursday and Friday, Renton told Racing TV: ‘We have been looking at this scenario for a while now with this gale coming in, so we have been able to put in some contingencies.

‘We felt able to put on the meeting on Saturday if necessary and we just felt it was infinitely preferable to have a proper day’s racing as a Festival day rather than 10- and nine-race cards.’

Asked if running on Saturday could prove a portent to having a permanent fixture moved from Wednesday to that day, Renton said: ‘Not at all, we feel giving a Festival day a full day is right for all the owners and trainers.

‘Some people loved it (extended Thursday and Friday in 2008), but I’ve heard from others that people just prefer a full day’s racing and get their glory accordingly.’ 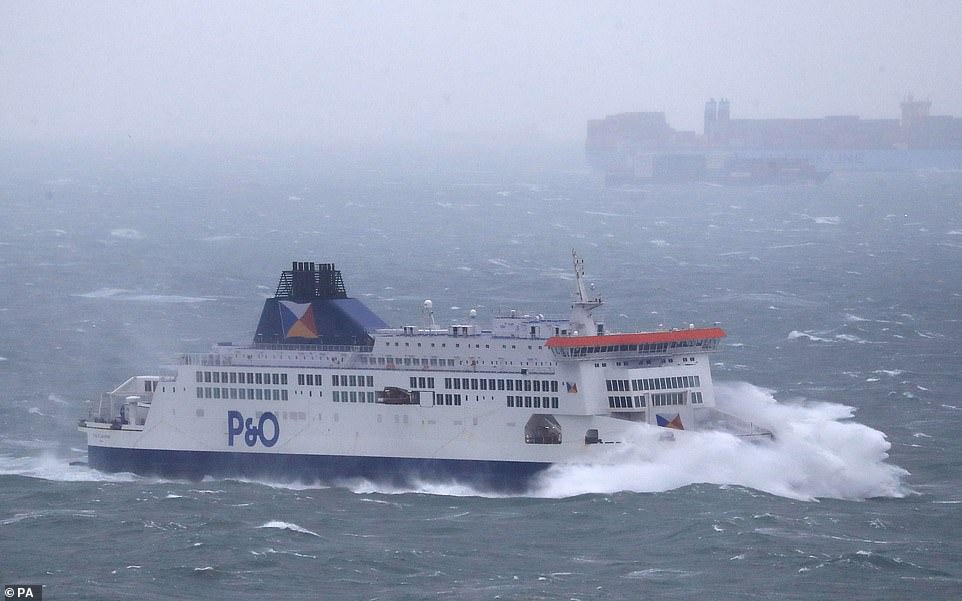 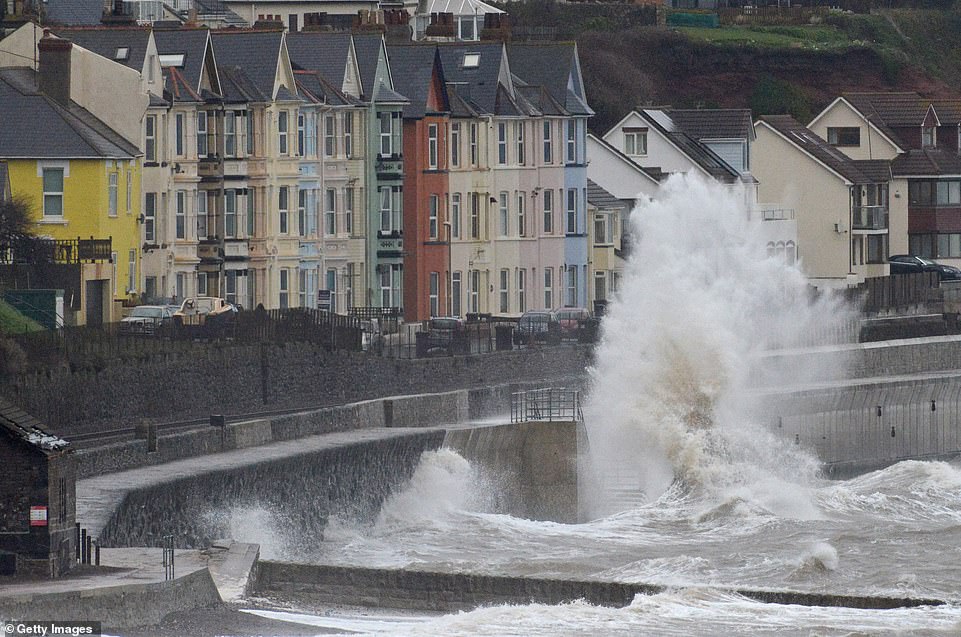 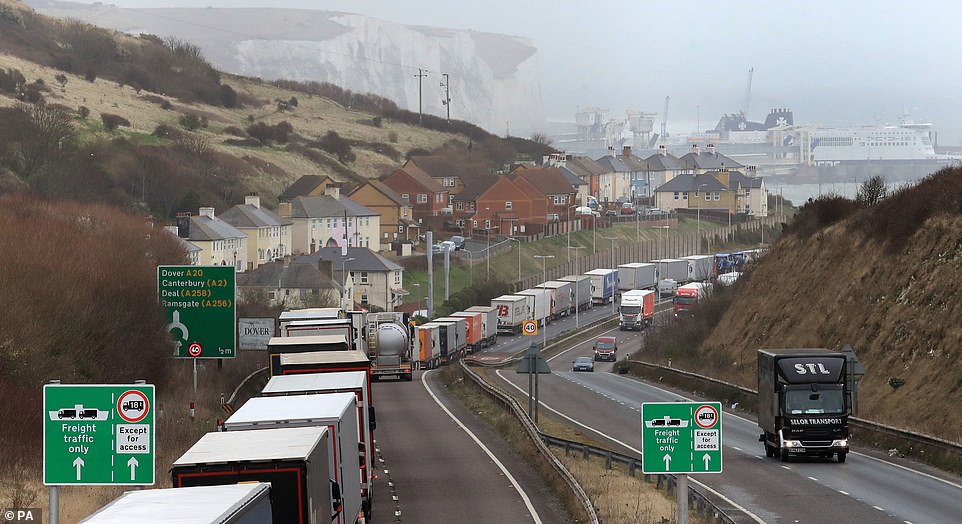 Six crew members have been airlifted from a stricken French fishing boat off Lands End in ‘atrocious’ 20ft waves and storm-force winds, the Maritime and Coastguard Agency (MCA) has said.

HM Coastguard was alerted at around 10pm on Tuesday night that La Fanette, a 79ft fishing vessel, had suffered engine failure.

Another fishing vessel went to help and a lifeboat was launched.

‘Despite atrocious weather, Sennen Cove Lifeboat launched but due to 5-6 metre (16-20ft) waves on scene and storm force winds, it was impossible for either the fishing vessel or the lifeboat to establish a tow with La Fanette,’ the MCA said.

‘The six crew on board were airlifted from the fishing vessel by Newquay Coastguard Rescue Helicopter.’

‘Eastern areas might start getting some very strong winds by that point, but generally across much of the UK it’s going to be very windy this morning.

There were strong winds of 70mph in South Uist in the Western Isles on Tuesday, while gusts of 67mph hit areas in Northern Ireland.

Gareth, the seventh named storm of the 2018/19 season, has undergone ‘explosive cyclogenesis’ – becoming what is known as a ‘weather bomb’ – as its air pressure plunged by more than 24 milibars in 24 hours.

It swept in across Northern Ireland on Tuesday, causing problems on the roads with fallen trees and the cancellation of ferries.

Met Eireann, the Irish Meteorological Service, also warned of ‘severe and damaging gusts’ as the storm moved over the country.

Planes were filmed struggling to land at London City Airport, while the RNLI urged people tempted to watch strong waves to ‘stay back, stay high and stay dry’ amid forecasts of 50ft wave swells approaching Ireland.

Highways England said officers were dealing with severe flooding near Charnock Richard services off the M6 in Lancashire, while a lane was closed on the M6 near junction 33 at Hampson Green due to flooding. 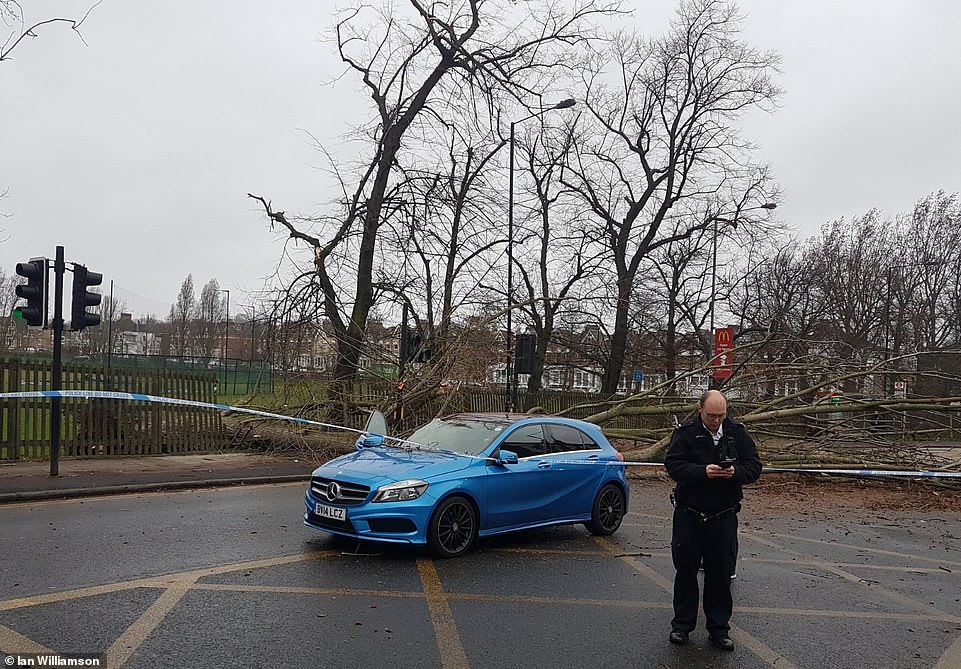 A tree fell onto a road in high winds today in Harringay, North London, with a Mercedes A180 pictured behind police tape 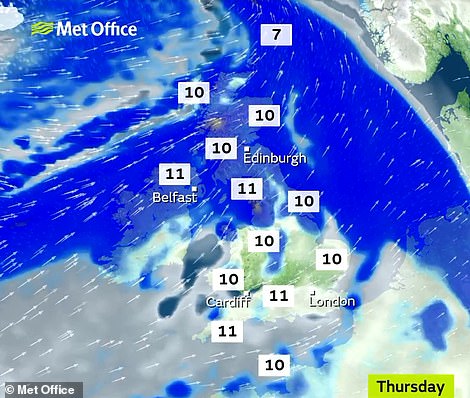 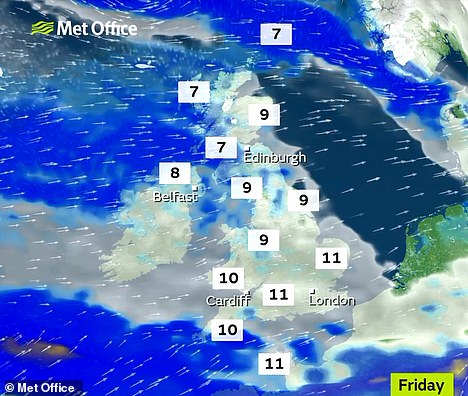 Forecasters have warned Britain is about to be battered by the worst period of weather since last year’s Beast from the East. Pictured: the predicted weather on Thursday and Friday 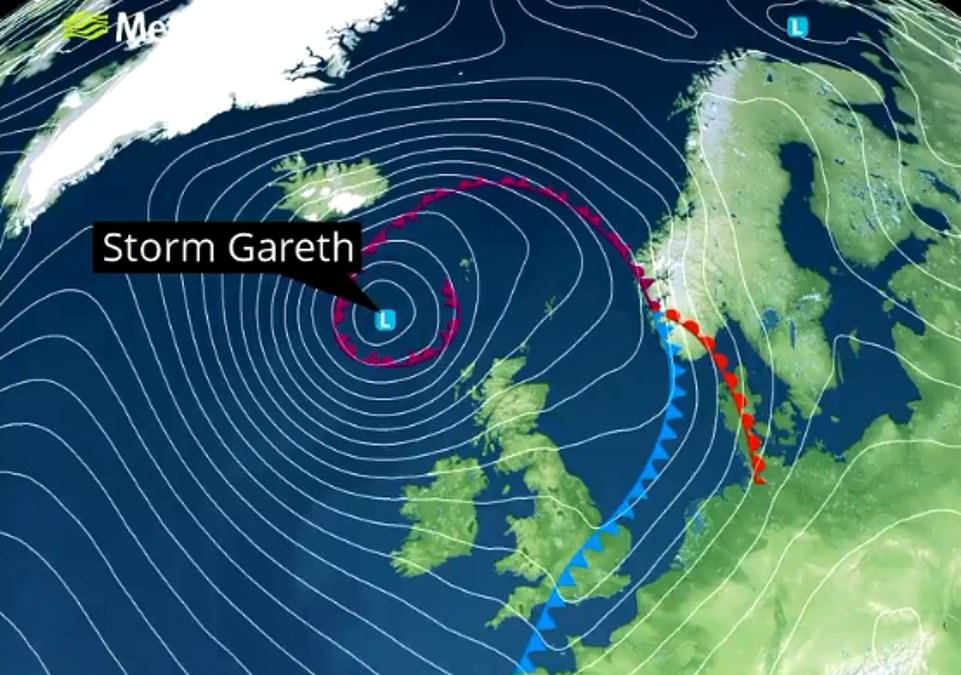 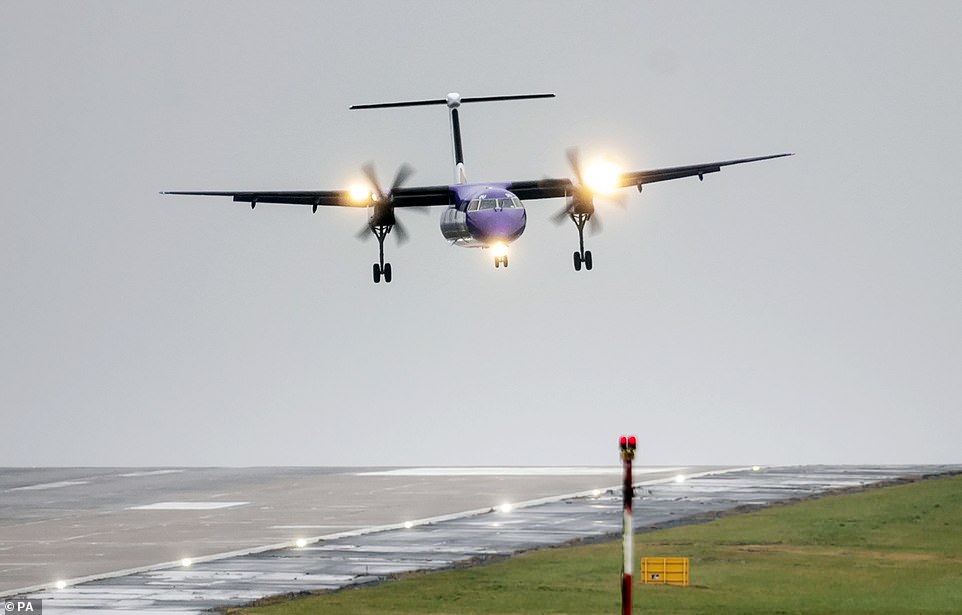 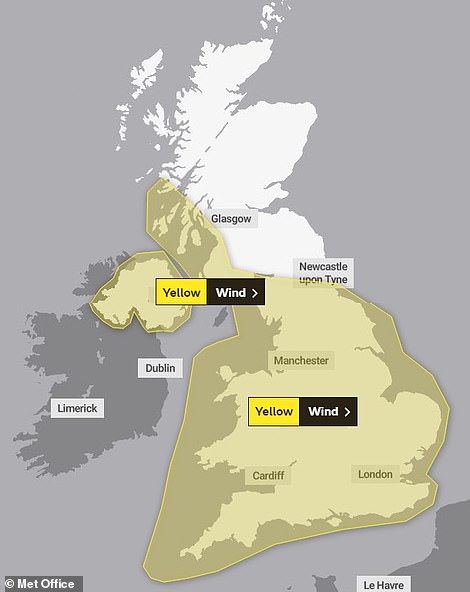 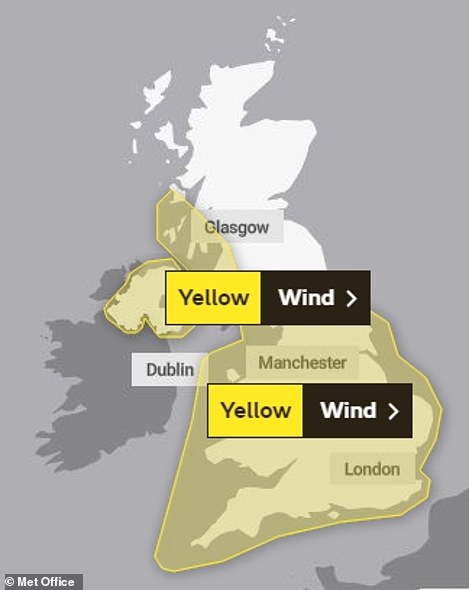 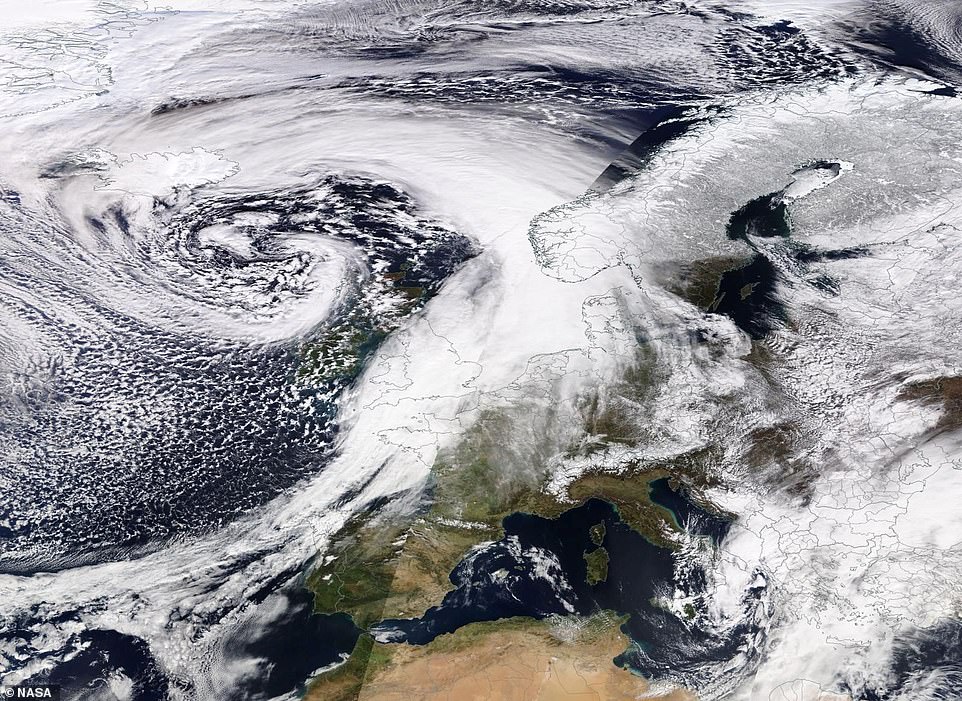 Storm Gareth is bringing gales from Iceland to Spain, shown in this dramatic image from Nasa’s Terra satellite