Story of the surgeon who did the first heart transplant

Some 50 years ago this week Dr Christiaan Barnard defied doubters to perform the first ever heart transplant.

The procedure prompted a medical revolution that meant heart conditions were no longer a death sentence, Dr Barnard subsequently became a pioneer in heart surgery and a worldwide celebrity.

His face appeared on the covers of Life, Newsweek, and Time magazines.

The 50th anniversary of this breakthrough operation, performed on December 3 1967 coincides with the release of a new book ‘Christiaan Barnard: The Surgeon Who Dared’, which is written by the surgeon’s former colleague David Cooper.

Images in the book show the ground-breaking surgeon hard at work in the operating theatre performing open-heart surgery, while another captures the first ever recipient of a heart transplant, Louis Washkansky, shortly after he woke up from the procedure.

Although the surgery was deemed a success Mr Washkansky, 54, died nine days later from pneumonia, which is thought to have been caused by the immune system-suppressing drugs he was given for the operation.

The surgeon, who started his life as a ‘rough-at-the-edges poor boy’ became a worldwide celebrity, mobbed by fans and rubbing shoulders with Princess Diana, boxer Mohammed Ali and even Pope Paul VI.

Mr Cooper, who worked with Dr Barnard during his time in surgery, wrote: ‘It is unlikely that any physician or surgeon either before or after him has been so widely recognised by the average man in the street.

‘This was in part because heart transplantation had a dramatic and mystical aura about it, but was equally a response to Barnard’s youthful good looks and charismatic personality, which naturally drew people’s attention to him.’ 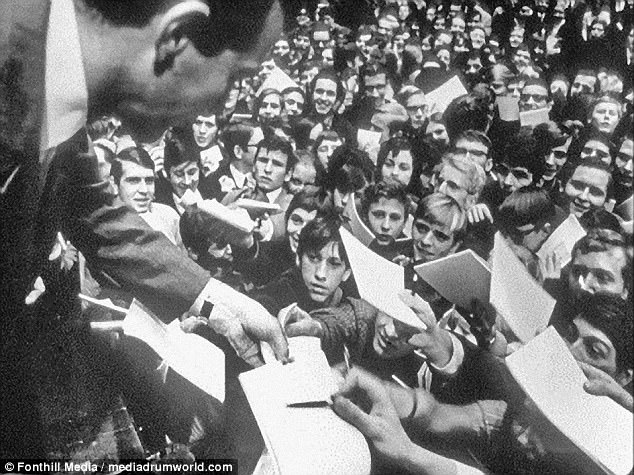 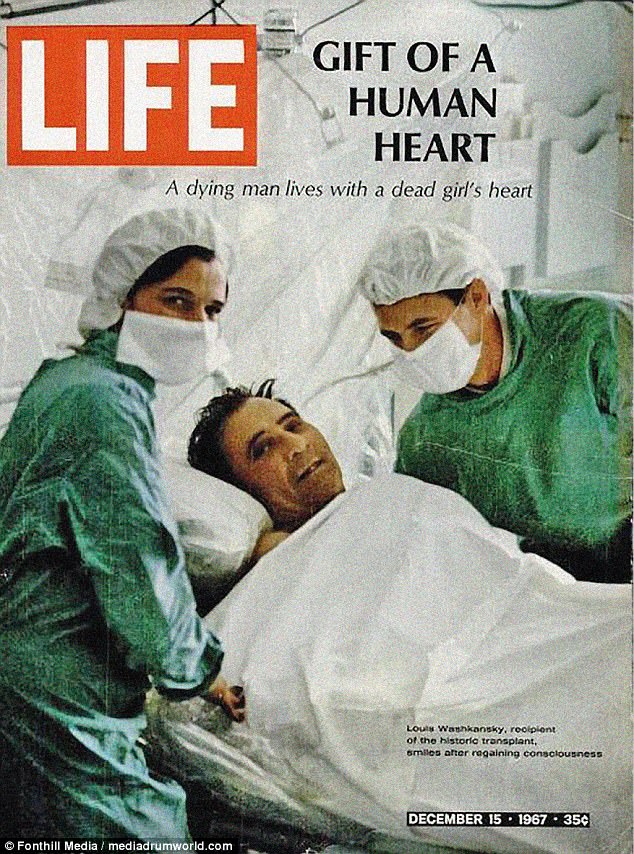 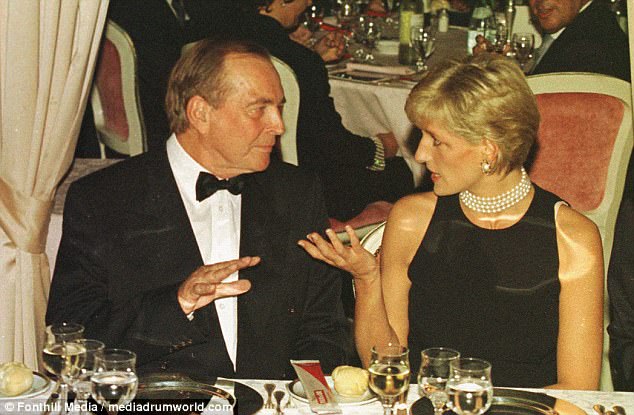 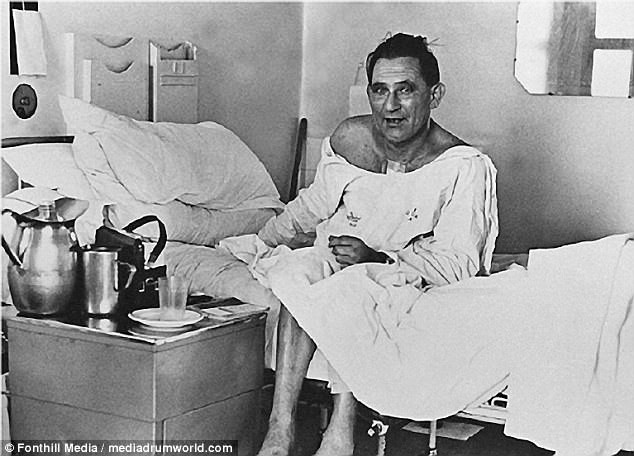 Louis Washkansky, 54, was the first patient to have the transplant but died nine days later

WHO WAS CHRISTIAAN BARNARD?

He grew up in South Africa, where he studied medicine for several years, even inventing a remedy for intestinal obstruction that saved 10 babies lives in Cape Town.

In 1955 he emigrated to the US and specialised in cardiac surgery,

His first heart transplant involved taking the organ from a patient who died of head injuries and putting it into Louis Washkansky, 54.

Mr Washkansky lived for 18 days after the surgery before dying from pneumonia, which was likely caused by the immune system-suppressing drugs he was given.

Dr Barnard performed the second ever heart transplant operation on Philip Blaiberg, who survived for 19 months, in 1968.

Dr Barnard, who became a worldwide celebrity, meeting Princess Diana, Mohammed Ali and former American President Lyndon Baines Johnson, retired as a surgeon in 1983 after developing arthritis in his hands.

He established the Christiaan Barnard Foundation to help underprivileged children throughout the world.

Mr Cooper, who describes Dr Barnard as an ‘unforgettable character’, wrote: ‘Christiaan Barnard, who led the surgical team that stunned the world by performing the first human-to-human heart transplant on the night of 2-3 December 1967, literally became famous overnight.

‘The daring operation captured the public’s imagination as no other before or since, and Barnard became one of the best-known people in the world.

‘This was in part because heart transplantation had a dramatic and mystical aura about it, but was equally a response to Barnard’s youthful good looks and charismatic personality, which naturally drew people’s attention to him.

‘This life-changing operation ensured not only his place in medical history, but worldwide public recognition for a number of years.’

The book charts the rags to riches tale of the enigmatic surgeon, from his humble beginnings in a small South African town to successfully performing the first ever heart transplant.

Though his first patient died just nine days after the surgery, Mr Barnard continued his work, with his next patient, Philip Blaiberg, surviving for 19 months after his transplant in early 1968.

Despite around 100 transplants being attempted across the world after Mr Barnard’s success, the average lifespan for a patient following the surgery was initially just three months. 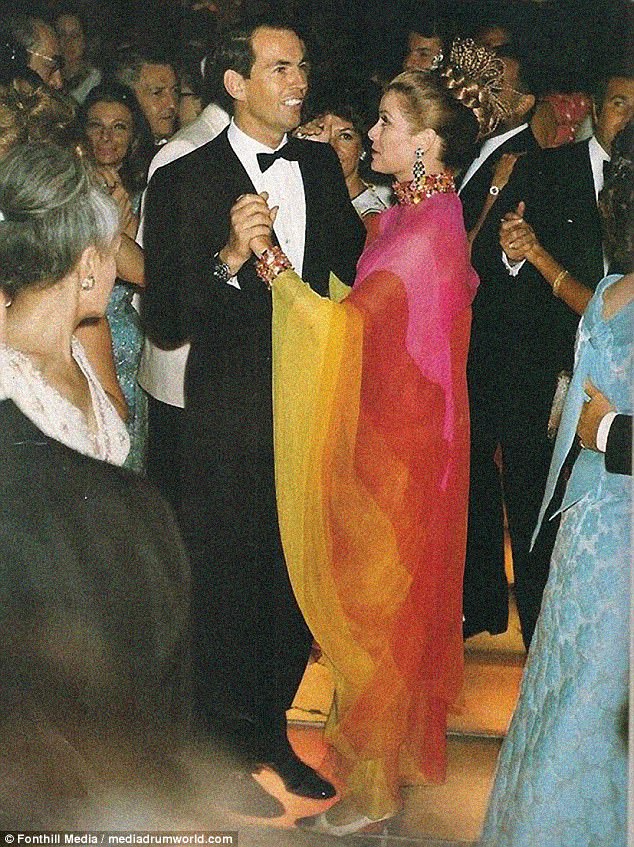 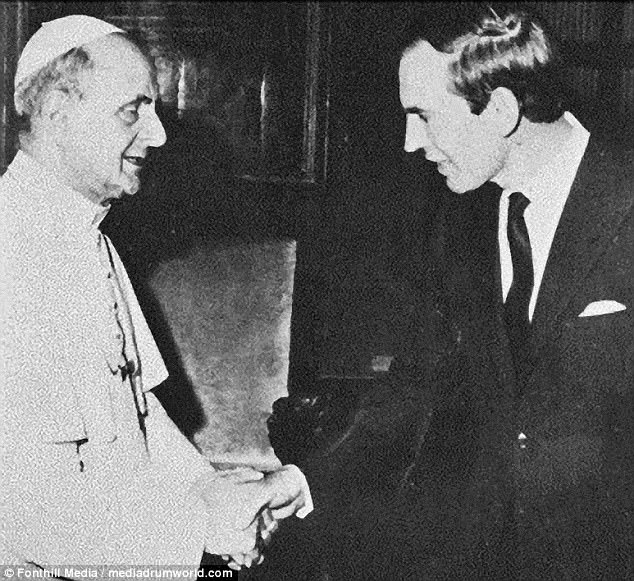 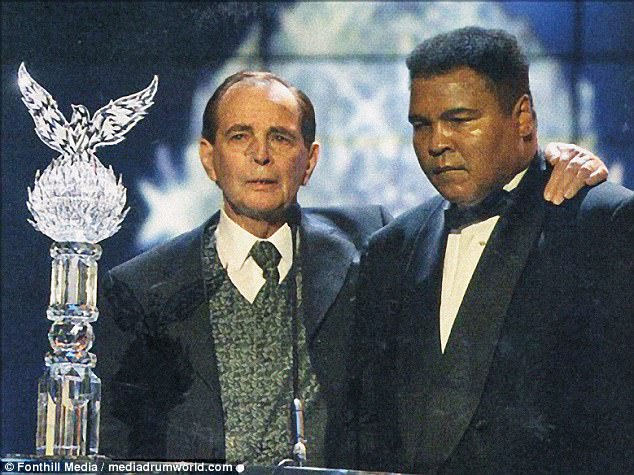 He was described as a ‘charming sophisticate, democrat and tyrant, selfless healer and boorish egotist’ (pictured presenting Muhammad Ali with the sportsman of the century award) 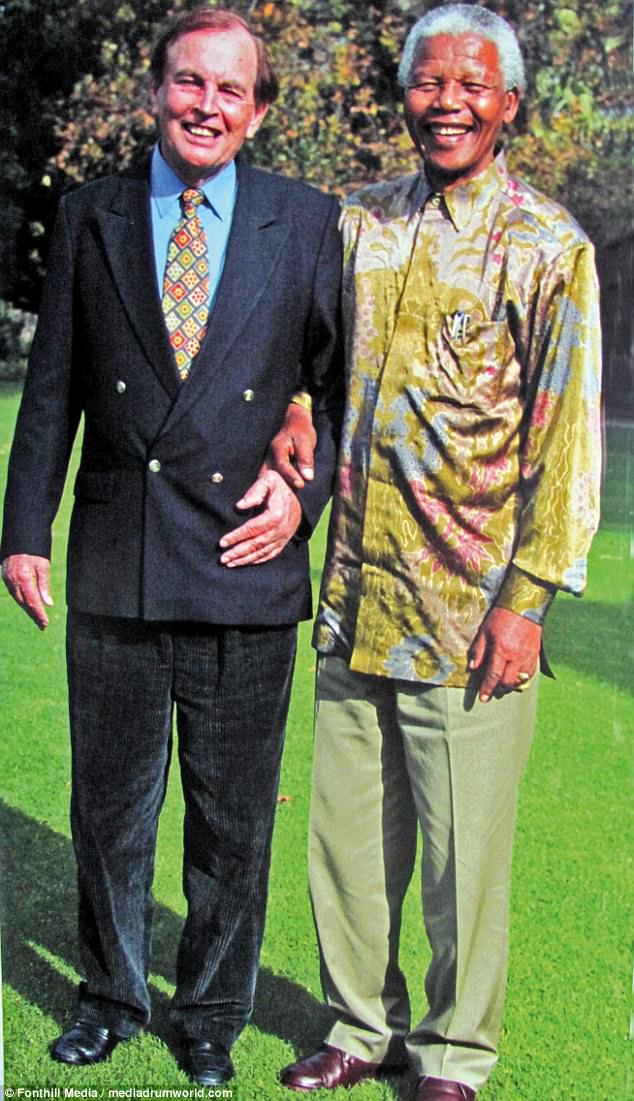 ‘Treated more as a celebrity than a distinguished surgeon’

Yet, from humble beginnings it appears fame may have gone to Dr Barnard’s head.

Mr Cooper wrote: ‘It is unlikely that any physician or surgeon either before or after him has been so widely recognised by the average man in the street.

‘Within days, his face appeared on the covers of Life, Newsweek, and Time magazines.

‘He quickly became in enormous demand as a speaker, both at professional medical congresses and at lay events, and he was soon treated in many ways more as a show business personality, a celebrity, than as a distinguished surgeon.’

Dr Barnard’s worldwide acclaim led to him attending functions with Princess Diana, meeting Pope Paul VI at the Vatican, dancing with Princess Grace of Monaco, posing with Nelson Mandela and presenting the ‘sportsman of the century’ award to Mohammed Ali.

Mr Cooper wrote:  ‘He travelled widely, meeting presidents, popes, and prime ministers, as well as other notables and celebrities.

‘At one time, it was claimed that his name and face were the most recognised in the world, perhaps with the exception of the boxer Muhammad Ali.

‘However, he had a number of faults, and some of the actions he took in his life were contentious.’ 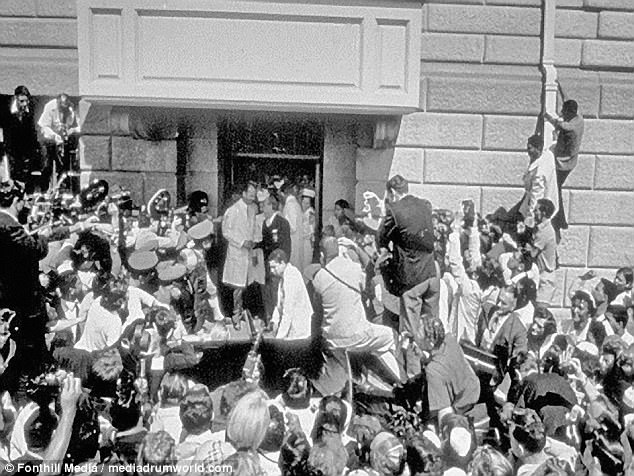 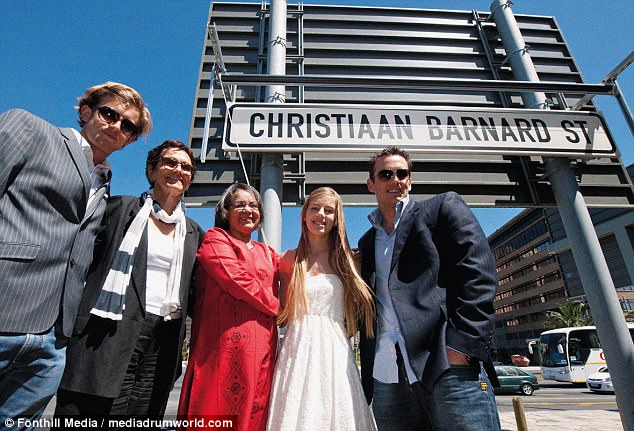 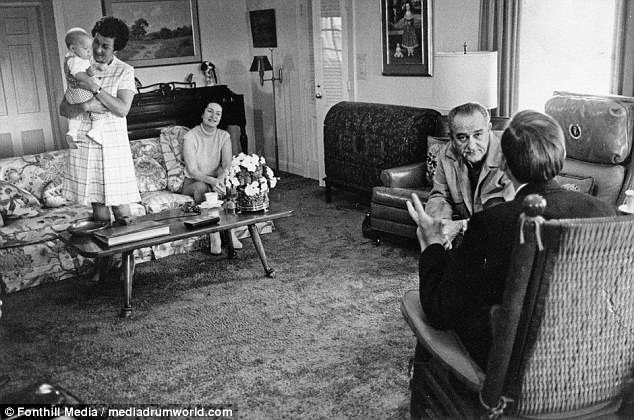 People say he ‘captured the public’s imagination’ (pictured with President Lyndon B. Johnson) 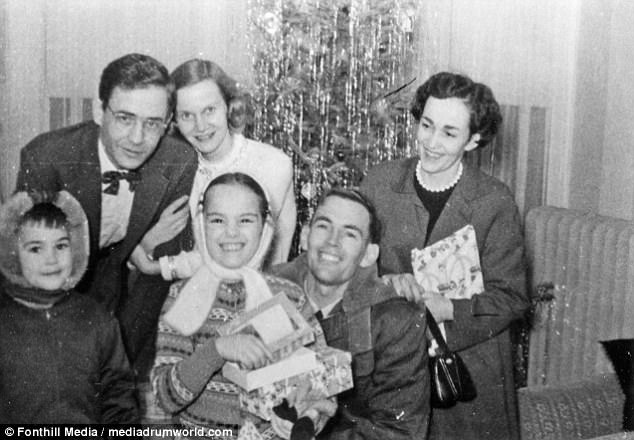 The ‘average man’ on the street would recognise Dr Barnard after he became one of the most famous global faces (pictured with his partner Louwtjie with their children, Deirdre and Andre, and friends John Perry, and his girlfriend, Genevieve in Minneapolis at Christmas, 1956) 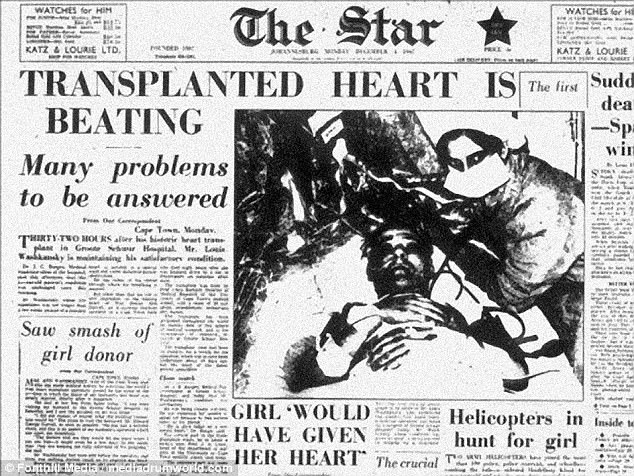 Front page of the South African newspaper, The Star, on Monday 4 December 1967 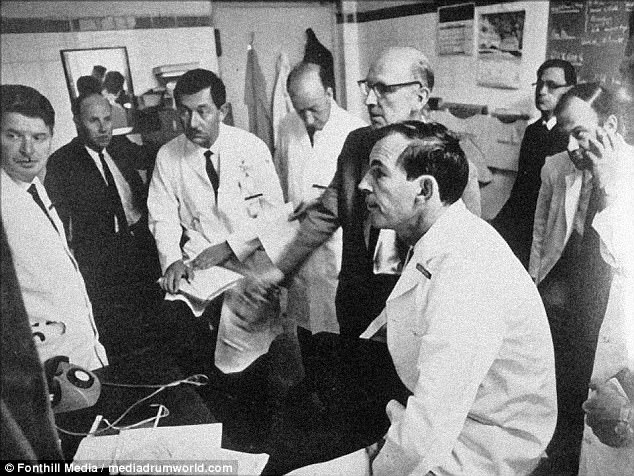 Dr Barnard and medical colleagues pictured discussing Mr Washkanskyís’, who was the first patient to have a heart transplant, progress at a morning conference. He died after nine days 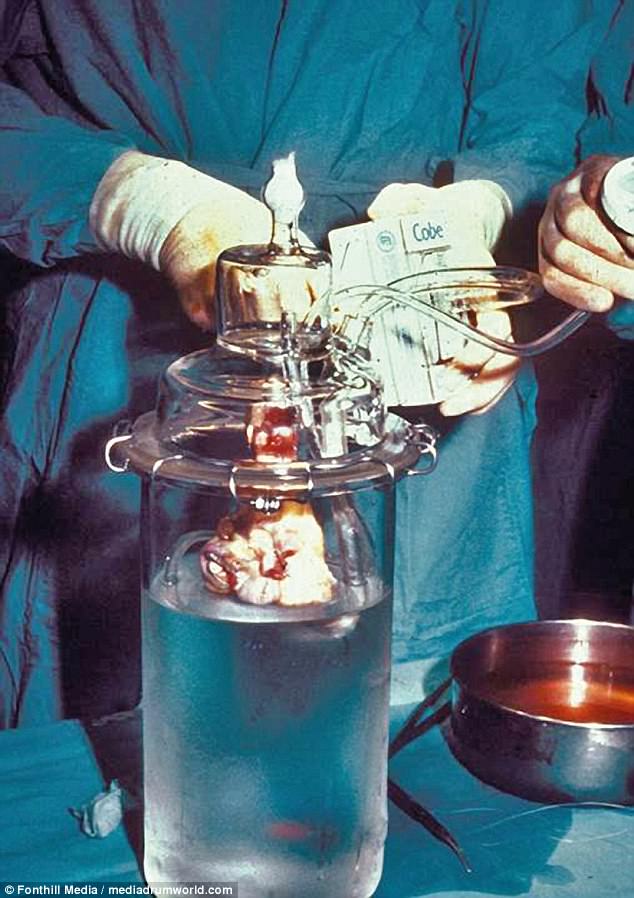 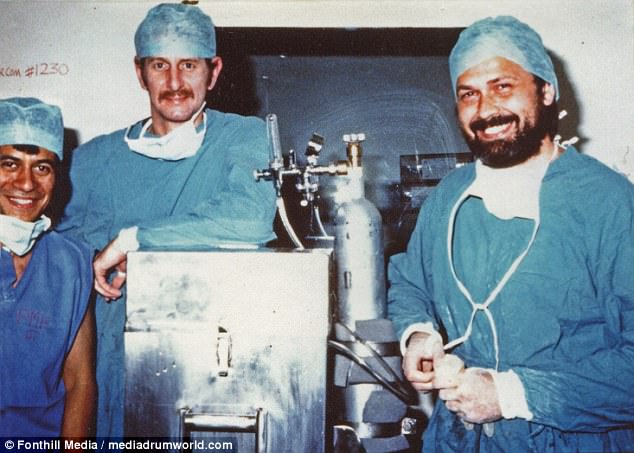 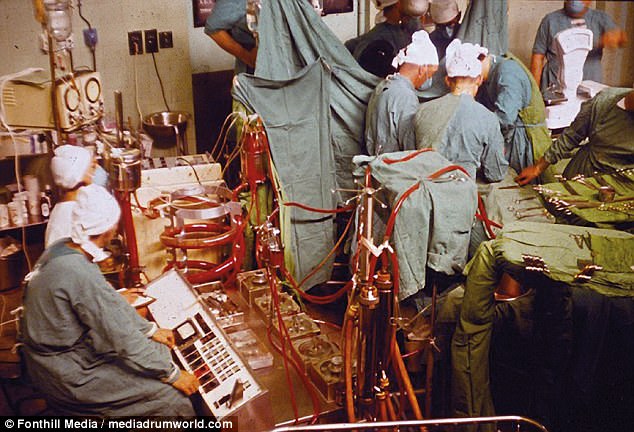 Operation at the hospital (Dr Barnard, with head obscured, is right of the operating table) 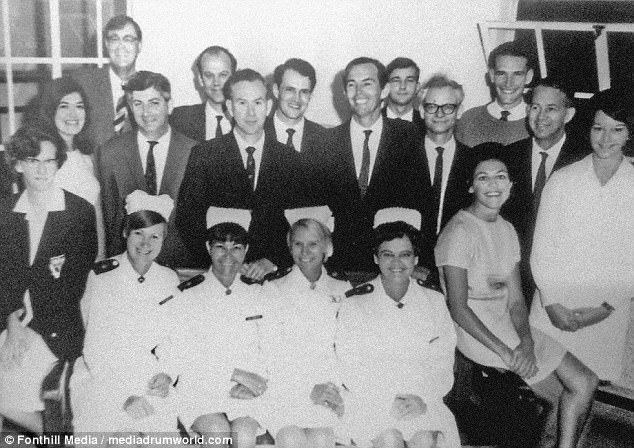 ‘The most unforgettable character’

Bob Frater, who had been a colleague of Dr Barnard in Cape Town, wrote of the pioneering surgeon: ‘He was then, at once, rough-at-the-edges poor boy and charming sophisticate, democrat and tyrant, selfless healer and boorish egotist, lover and Don Juan, shrewd parvenu, and naive acceptor of glitterati adulation, but, above all, surgical visionary and simply the most unforgettable character of the second generation of cardiac surgeons.’

‘Personally, having first met Barnard in the 1960s, worked with him for several years in South Africa and subsequently in the USA, and maintained contact with him until his death in 2001, I readily admit that he was, without doubt, the “most unforgettable character” I have met in my relatively long life.’