Wyatt Shaw became a medical mystery when he fell into a deep sleep for eleven days after acting as the ring bearer in his uncle’s wedding.

The seven-year-old was behaving normally until he went to sleep the night after the wedding.

His mother, Amy Shaw, struggled to wake up her son the next day, but he only regained consciousness briefly before falling back asleep.

After visiting a doctor in his hometown of Elizabethtown, Kentucky, Wyatt was sent to Norton Children’s Hospital in Louisville for further testing.

Two weeks later on October 12, Wyatt woke up with a limited mobility and doctors still have no idea what happened in his body to cause the deep sleep.

Wyatt Shaw (right), seven, fell into a deep sleep for 11 days after his uncle’s wedding. Doctors performed multiple tests on him but were unable to explain why he was asleep. When he finally woke up, he had limited mobility and ability to speak

When Wyatt Shaw arrived at Norton Children’s Hospital on October 1, doctors weren’t sure what was causing him to stay sleep.

His mother first thought his tiredness was due to exhaustion from the wedding.

She became worried after he couldn’t stay awake and was extremely lethargic when he was conscious.

Rhonda Thompson, Wyatt’s grandmother, told The News Enterprise that they performed three spinal taps, three MRIs, one MRA, five EEGs and a toxin panel on the child at the doctors attempted to uncover why he was a sleep.

They tested him for parasites, viruses, bacteria and infectious diseases that all could cause symptoms of fatigue.

But all the results turned up negative.

One of the main viruses he was tested for was encephalitis because it causes an inflammation in the brain.

This extremely rare but serious viral infection can give someone flu-like symptoms and cause fatigue.

Wyatt’s results showed he was free of the virus after the doctors performed multiple tests.

The doctors at the hospital have been working with Mayo Clinic in Minnesota and an expert in London to better understand what might have caused Wyatt to sleep for so long.

‘The doctor in London said he has seen a child sleep for as long as 10 days without waking up and Wyatt slept for 11,’ Thompson said. ‘I said he was such a competitor that he wanted to break that 10-day record so he did.’

Doctors gave him medication that is used to prevent seizures and he woke up.

Seizure medication, depending on the type, targets neurotransmitters in the brain to stop them from firing off signals to other receptors. 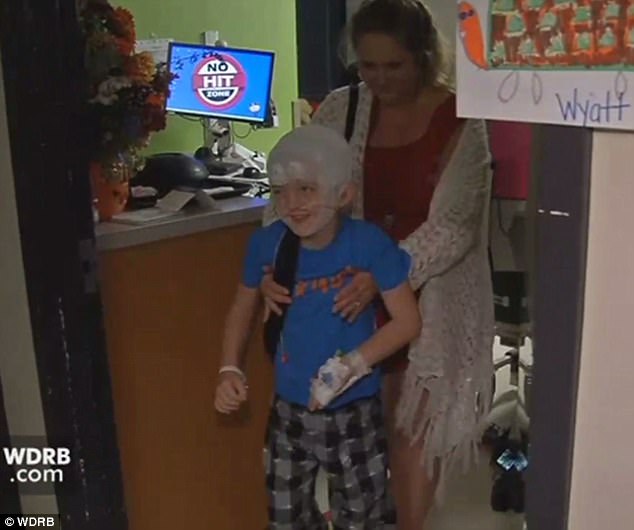 Wyatt has slowly regained his ability to walk and speak again with the help of the doctors and his mother (pictured right). Doctors said it will be a long road to recovery

It is unclear if Wyatt was experiencing seizure-like symptoms because all the scans revealed normal brain waves, but the medication helped him wake up.

Kleine-Levin Syndrome (KLS) is one disorder that causes someone to sleep for 12 to 24 hours a day where they only wake to eat or go to the bathroom.

It is unclear what causes this disorder, but health experts say it could be caused by a disruption in the hypothalamus and thalamus when regulating sleep patterns.

The hypothalamus is a structure deep inside the brain that acts as the control center for sleep and arousal.

When someone is beginning to wake up, it is caused by the brain stem communicating with the hypothalamus to help the body transition into alertness.

These functions can be disrupted and cause a comatose state for the person.

Wyatt wasn’t diagnosed with KLS, but he showed similar symptoms to patients who have had the syndrome.

When he woke up, he had difficulty swallowing, an inability to walk and speak because he was asleep for so long.

Doctors are unsure if Wyatt will experience this again, but he has gotten better since he woke up with improvement towards his speech and mobility.