A fundraising page has provided bright news in the midst of darkness for the family of amputee policeman Constable Jonathon Wright.

Policemen Jonathon Wright and Matthew Foley were working a random breath test site on Friday night when a distracted driver plowed into the pair – trapping them between a car and police van.

Constable Wright’s leg had to be amputated after the smash – as it was revealed that the 22-year-old man behind the wheel of the car was allegedly texting at the time.

The page reads: ‘Our dear friend Jono, a Senior Constable with the NSW police force, was struck by a car last night whilst at work. He was just a bloke going to work, supporting his family and protecting his community.

Smiling with his wife and three young children, this is the first picture of the policeman who was mowed down at a random breath test site on Friday night 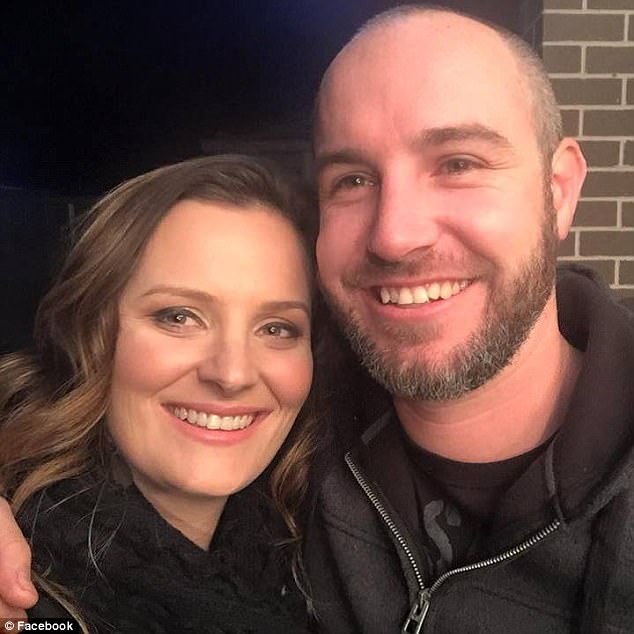 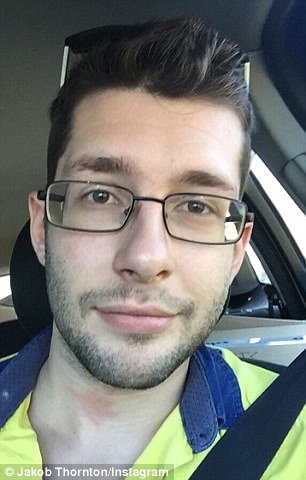 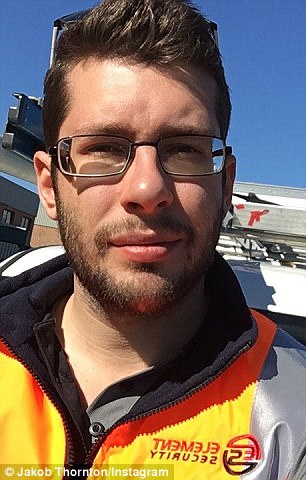 Driver Jakob Thornton, 22, appeared in court on Saturday accused of ploughing into the policemen at 60km/h while looking at his phone 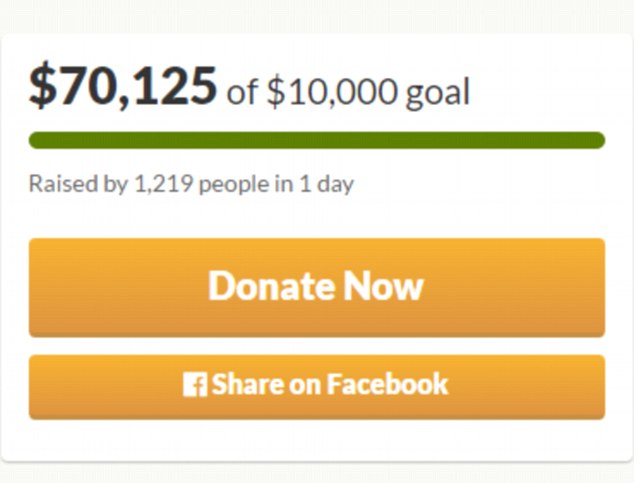 ‘He and a colleague were both hit, with Jono sustaining life threatening injuries. Today he is stable in ICU, but facing the reality of life as an amputee.

‘Lisa and Jono have a long and arduous road ahead of them. They’ve been inundated with messages of love and support, all of which I know are so greatly appreciated.

‘Probably the only thing that’s actually within our power right now is to help ease their financial stresses so they can focus on what’s important, Jono’s recovery. If you can spare any amount, no matter how small, I know they’ll be eternally grateful.

‘Everyone deserves to go home safely.

Constable Wright was on duty at a random breath test site in west Sydney when a Fiat van driver allegedly smashed into him and colleague Matthew Foley on Friday night.

He was rushed to hospital where his leg was amputated 15cm above his foot.

A police spokesman on Saturday night told Daily Mail Australia that Constable Wright ‘is in stable condition but will be in hospital for some time.’

Constable Foley who suffered a ‘serious fracture’ remains in a stable condition. 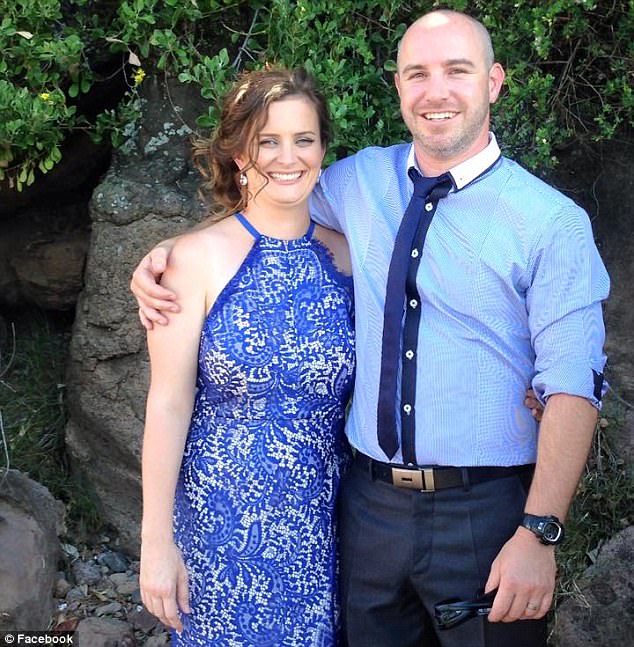 The GoFundMe page says: ‘He was just a bloke going to work, supporting his family and protecting his community’ 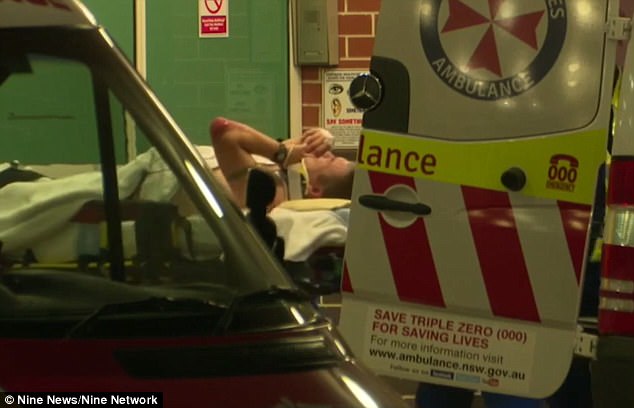 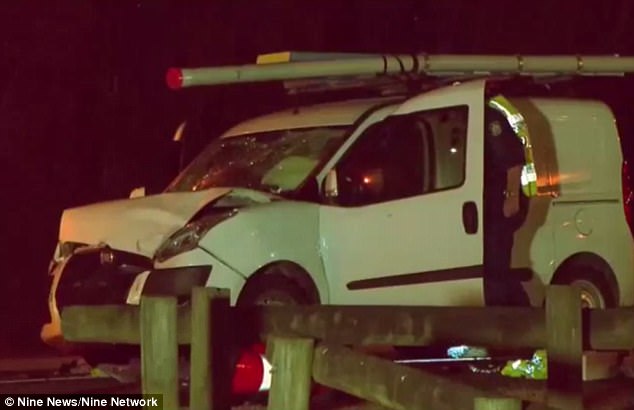 Driver Jakob Thornton, 22, appeared in court on the weekend accused of ploughing into the policemen at 60km/h while looking at his phone.

The court heard Mr Thornton lost his licence four times in four years, and was fined in 2016 for using his mobile while driving, The Daily Telegraph reported.

Mr Thornton then admitted to police officers he was looking at his phone for 10 to 20 seconds when he crashed into the two officers, the court heard.

‘Ten to 20 seconds at 60 kilometres an hour, that is a few hundred metres,’ magistrate John Favretto said, according to the Sydney Morning Herald.

Prosecutor senior sergeant Leesa McEvoy told the court police lights and safety measures were in place as the constables set up the road side breath testing site.

‘The strength of the prosecution case is nothing short of solid,’ senior sergeant McEvoy added.

Mr Thornton’s application for bail was denied and he was ordered to face Campbelltown Local Court on Wednesday. 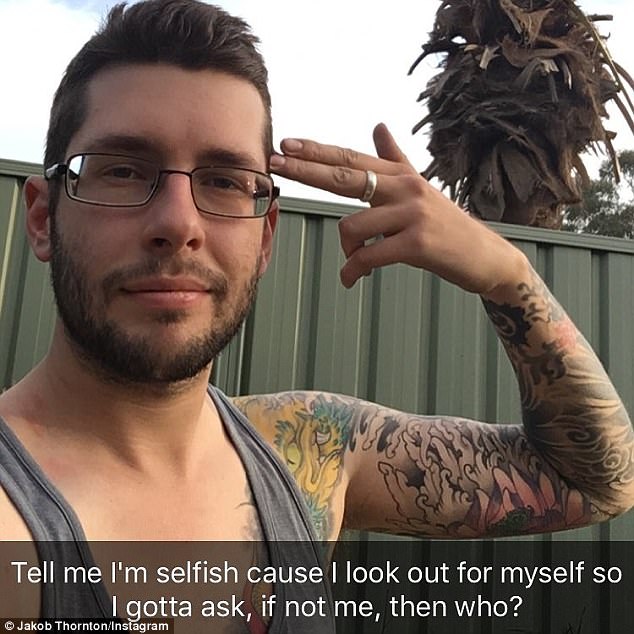