A street artist has hijacked billboards in Hollywood to attack the entertainment industry for failing to tackle widespread sexual misconduct.

Artist Sabo said he was inspired by the Oscar nominated movie Three Billboards, which is based on the real-life story of Frances McDormand, who rented three billboards to demand justice for her murdered daughter.

The conservative artist covered three consecutive billboards on La Brea Avenue in Hollywood with powerful messages in black text on a red background.

‘And the Oscar for biggest pedophile goes to…’ the first sign read.

‘We all knew and still no arrests,’ the next stated.

The final billboard read: ‘Name names on stage or shut the hell up!’

The overlays, which measured 48 feet across by 14 feet high sprang up over Tuesday night with the help of a crew of six. 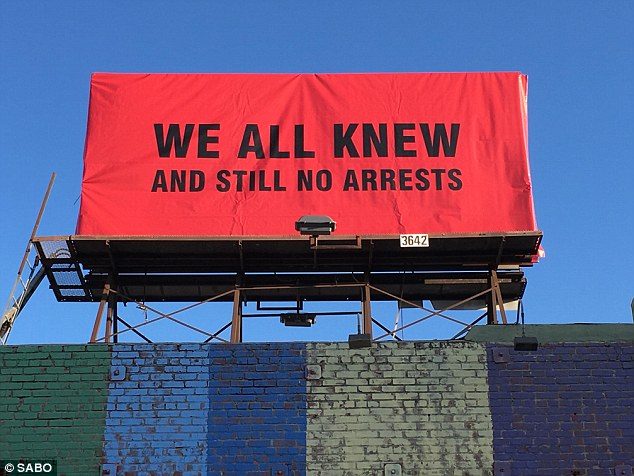 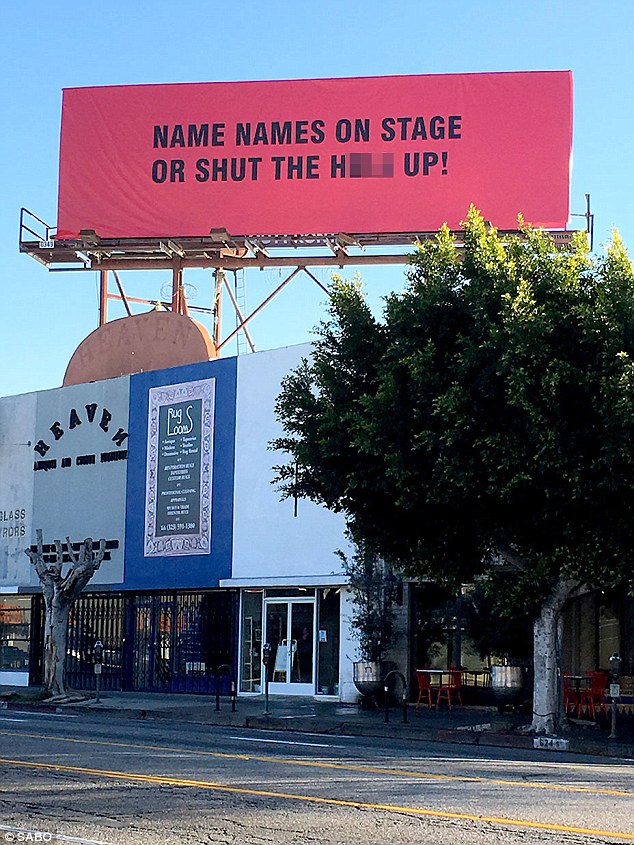 The red and black covers featured slogans like ‘Name names on stage or shut the hell up!’

Both the formation, and the layout of the billboards, mimic those featured in the movie.

Sabo, who posts under the Twitter name unsavoryagents‏, shared photos of the boards on Twitter with the caption: ‘RIDING HOLLYWOOD’S ASS ONE BILLBOARD AT A TIME’.

The artist has been very critical about Hollywood in the wake of the Harvey Weinstein sex scandal.

The scandal sparked the Me Too and Time’s Up movements which have seen several powerful executives and actors, including James Toback and Kevin Spacey, lose their jobs after being accused of sexual assault. 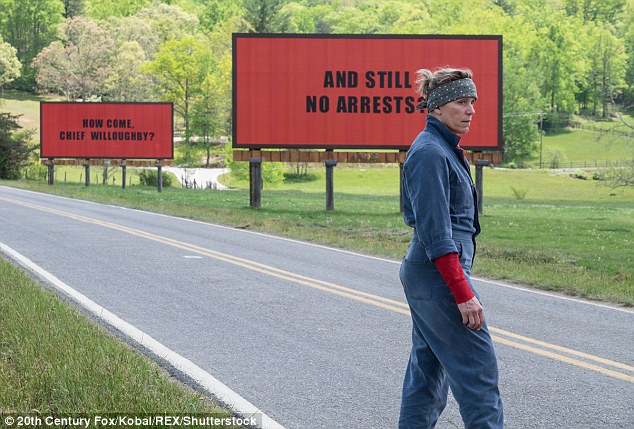 Three Billboards, Outside Ebbing, Missouri, (pictured) is tipped to take best picture at Sunday’s Oscars in a ceremon

Sabo previously took over a billboard in November, changing the sign for The Greatest Showman so it appeared that Democratic senator and former comedian Al Franken was grabbing at singer Zendaya, who starred as a trapeze artist in the movie.

The ad reflected the now infamous photo of Franken groping a sleeping woman on a flight and Franken has since resigned.

Sabo told the Hollywood Reporter his latest stunt was an attack on those who were aware of sexual harassment but stayed silent, claiming they allowed the behavior to continue.

He said it was also a warning for celebrities not to preach about sexual misconduct in their speeches.

The movie that inspired Sabo, Three Billboards, Outside Ebbing, Missouri, is tipped to take best picture at Sunday’s Oscars in a ceremony that will take place just a few miles from the billboards.