Stress lives in the hippocampus region of our brain

Stress lives in the hippocampus region of the human brain which is also responsible for motivation, emotion and memory, study shows

Scientists have identified where stress resides in the human brain for the first time.

Brain-scanning was used to track the source of psychological stress induced by a series of evocative images shown to 30 volunteers.

It found the origin of stress came from a region called the hippocampus, which is heavily involved in the regulation of motivation, emotion and memory.

Brain-scanning was used to track the source of psychological stress induced by a series of evocative images shown to 30 volunteers. It found the origin of stress came from a region called the hippocampus. If the neural connections reached the hypothalamus (right), the participants felt highly stressed. If however it reached the dorsal lateral frontal cortex (dIPFC), left, then this quashed the response and regulated the stress experienced

Participants were forced to look at troubling images, such as a snarling dog, mutilated faces or filthy toilets, to illicit an innate reaction.

These images were interspersed with calming photos, such as natural scenes. For each image, the participant graded the level of stress triggered by the photo.

Functional MRI (fMRI) scanning saw, in real time, how this psychological strain was processed in the brain.

It revealed that neural connections started in the hippocampus, deep in the brain, and emanated throughout the organ. 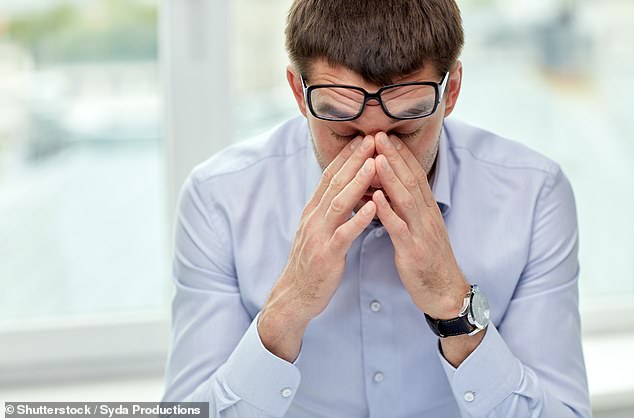 Researchers from Yale University, who conducted the research, say understanding where stress comes from and how it can be regulated could lead to some treatments being created to help people suffering from ill mental health (stock)

When the stress-related ripples reach the hypothalamus — which produces some of the body’s hormones — the participants felt highly stressed.

However, the stressful signals from the hippocampus also reached as far as the dorsal lateral frontal cortex which is heavily involved in complex mental functions and emotional regulation.

When the neural connection to this part of the brain was strong, it was able to rein in the uncomfortable feelings and dampen the emotional response.

However, not all people are able to regulate their stress levels via the frontal cortex.

For example, people with mental health and anxiety do not receive this calming response and therefore are hit harder by stress than others.

Researchers from Yale University, who conducted the research, say understanding where stress comes from and how it can be regulated could lead to some treatments being created to help people suffering from ill mental health.

‘These findings may help us tailor therapeutic intervention to multiple targets, such as increasing the strength of the connections from the hippocampus to the frontal cortex or decreasing the signalling to the physiological stress centres,’ said Dr Ranjita Sinha, who led the study.

The full findings were published in the journal Nature Communications.

How fMRI scans track what happens in the human brain

Functional magnetic resonance imaging (fMRI) is one of the most recently developed forms of neuroimaging.

It measures the metabolic changes that occur within the brain, such as changes in blood flow.

Medical professionals may use fMRI to detect abnormalities within the brain that cannot be found with other imaging techniques, measure the effects of stroke or disease, or guide brain treatment.

It can also be used to examine the brain’s anatomy and determine which parts of the brain are handling critical functions.

A magnetic resonance imaging (MRI) scan uses a magnetic field rather than X-rays to take pictures of body.

The MRI scanner is a hollow machine with a tube running horizontally through its middle.

You lie on a bed that slides into the tube of the scanner.

Equipment used in fMRI scans uses the same technology, but is more compact and lightweight.

The main difference between a normal MRI scan and a fMRI scan is the results that can be obtained.

Whereas a normal MRI scan gives pictures of the structure of the brain, a functional MRI scan shows which parts of the brain are activated when certain tasks are carried out.

This includes language, memory and movement.