Strictly Come Dancing: Anton du Beke looks jubilant as he gets his turn in the judges’ chair

Anton du Beke looked over the moon as he made his debut on the judging panel during Saturday night’s episode of Strictly Come Dancing.

The dancer, 54, replaced regular judge Motsi Mabuse on the panel after she was forced to self-isolate for two weeks at home following an ‘urgent trip’ to Germany.

Anton was introduced by hosts Tess Daly and Claudia Winkleman who said the judging panel was ‘different’ as he joined Shirley Ballas and Craig Revel Horwood. 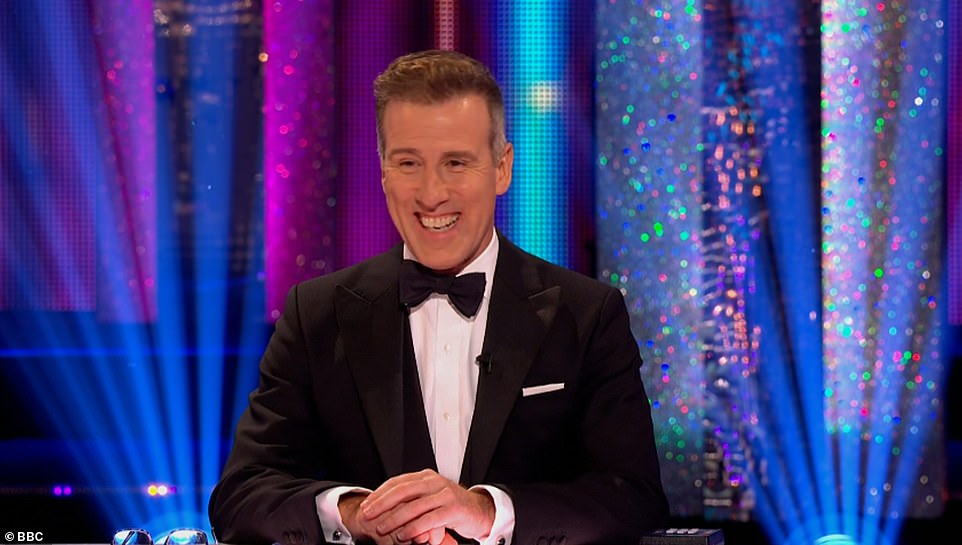 Overjoyed: Anton du Beke looked over the moon as he made his debut on the judging panel during Saturday night’s episode of Strictly Come Dancing

Tess told viewers: ‘As you can see we are missing Motis tonight who sadly won’t be here for the next two shows.’

Claudia jokingly added: ‘So Anton has stepped in after much persuasion, we love you Anton!’

Grinning from ear to ear, Anton said: ‘I will endeavour to be much more generous than these two have been to me over the last few years. We should have a lovely night.’

Meanwhile, Tess and Claudia also told viewers that Katya Jones and Nicola Adams would not be returning to the competition after Katya tested positive for COVID-19. 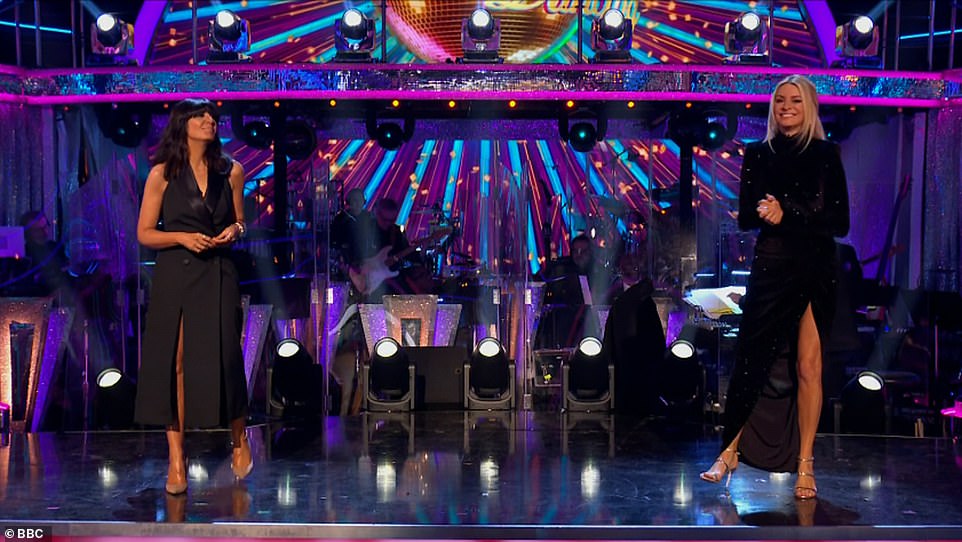 Show: Anton was introduced by hosts Tess Daly and Claudia Winkleman who said the judging panel was ‘different’ as he joined Shirley Ballas and Craig Revel Horwood

Claudia said: ‘Unfortunately Nicola and Katya had to withdraw from the competition after Katya tested positive for Covid 19. They both feel fine and are isolating separately.’

Tess said the dancer and the former boxer were watching, adding: ‘We know you are watching and we are so sad your time has come to an end. We are sending all of our love to you here.’

It was confirmed on Friday that Anton would be standing in for Motsi on the judging panel this Saturday.

In a statement the show wished the dancer ‘good luck’ as he prepared to make his debut as a judge on the show, after Motsi announced on Thursday she would be isolating for two weeks following an ‘urgent trip’ to Germany.

The statement, posted to Instagram on Friday, said: ‘We are pleased to announced that the King of Ballroom Anton Du Beke is stepping into our judging panel this weekend. Good luck Anton!’

Minutes later Anton re-posted the announcement to his own social media, no doubt excited about the new job after 16 years on the show. 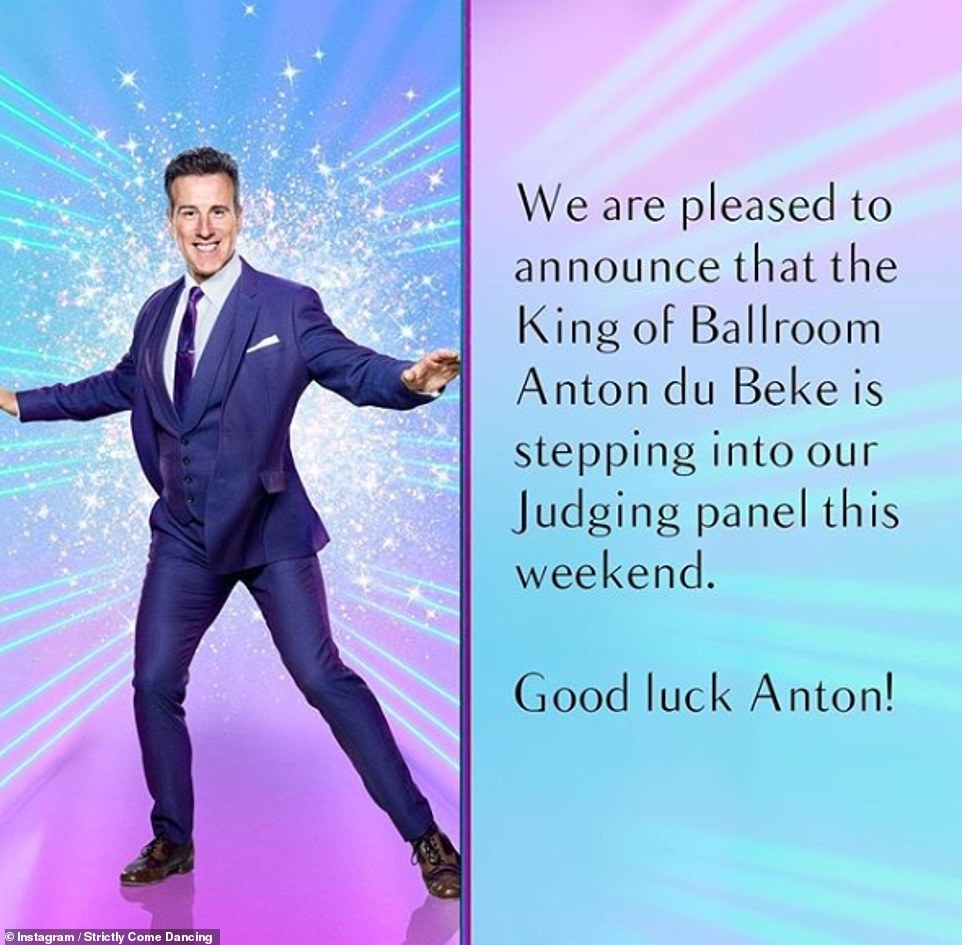 Thrilled: In a statement the show wished Anton ‘good luck’ as he prepared to make his debut as a judge on the show

For years fans have lobbied for Anton to land a job on the Strictly judging panel, given he is the show’s longest serving professional dancer and has been a part of Strictly since it began 2004.

This year he was the first pro to be eliminated alongside former Home Secretary Jacqui Smith.

Before being announced as Motsi’s stand-in, Anton said he’d love to appear on the Strictly judging panel.

Speaking on the Driven Celebrities podcast he said: ‘In a heartbeat. I wouldn’t hang up the shoes at all, because I love being out in front and performing.

‘I do have a bit of time on my hands now, so I don’t know of a better way to fill it quite frankly. If that opportunity came up, wouldn’t it be nice?

‘I’m forever pert and ready. I’m starched to an inch of my life, ready for the nod.’ 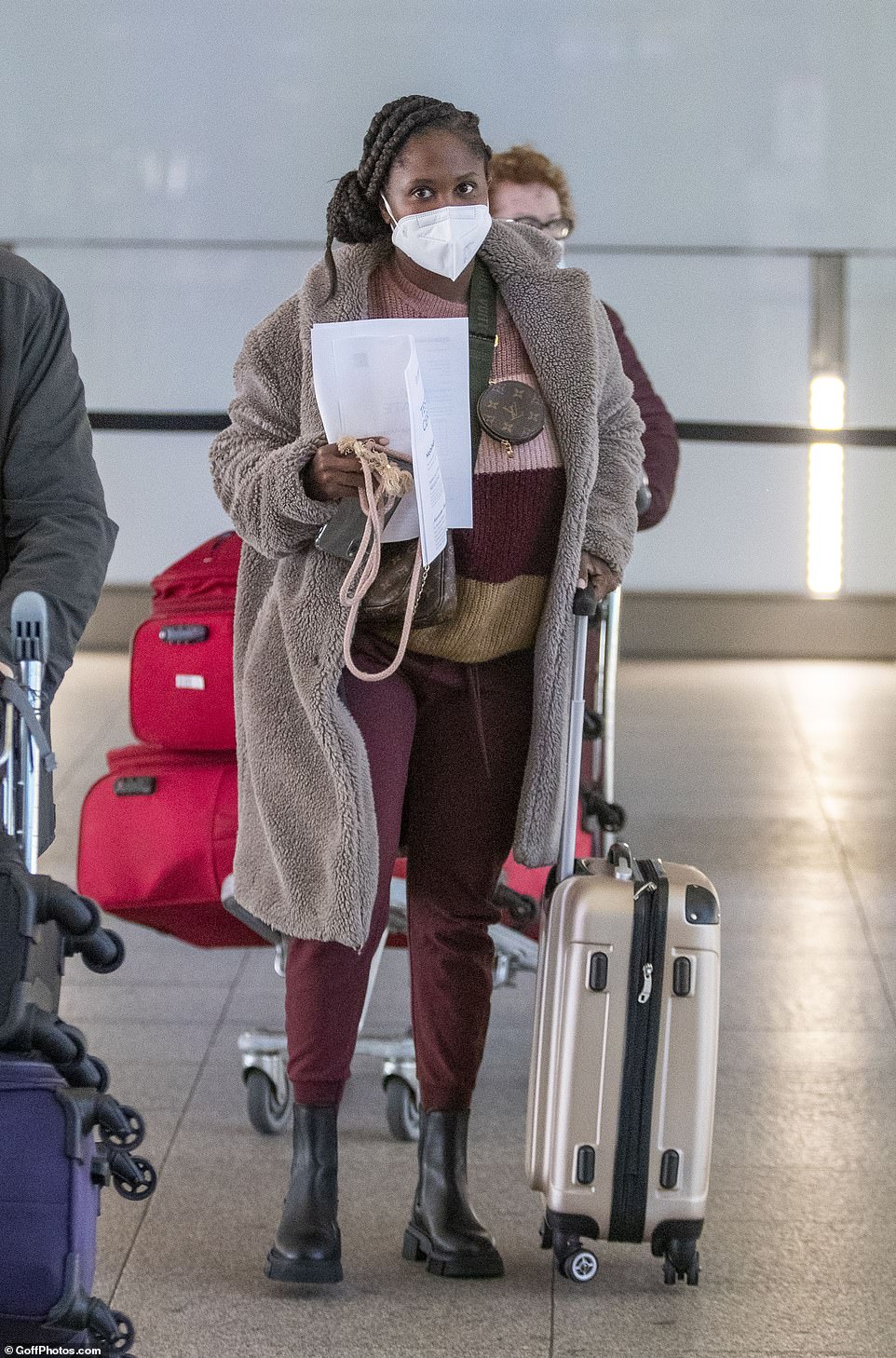 Absent: Motsi announced on Thursday she would be absent from the judging panel for two weeks after jetting to Germany for an ‘urgent trip’, meaning she has to self-isolate

Last year it was reported that Anton had threatened to quit the show after missing out on landing a job in the judging panel in favour of South African dancer Motsi.

A source told The Sun at the time: ‘He felt if they recruited within the Strictly family, it should be him. And despite not doing a screen test for the role, he still really thought he had a chance.’

The source added: ‘So when the news broke that Motsi was the new judge, he was livid. And he claimed he would quit unless the Strictly bosses gave him an ”enhanced” position.

‘It was a real snub to his pride, especially as this is the second time he’s been overlooked.’

On Thursday Motsi announced she would absent from the show for two weeks while she quarantined after returning home from Germany. 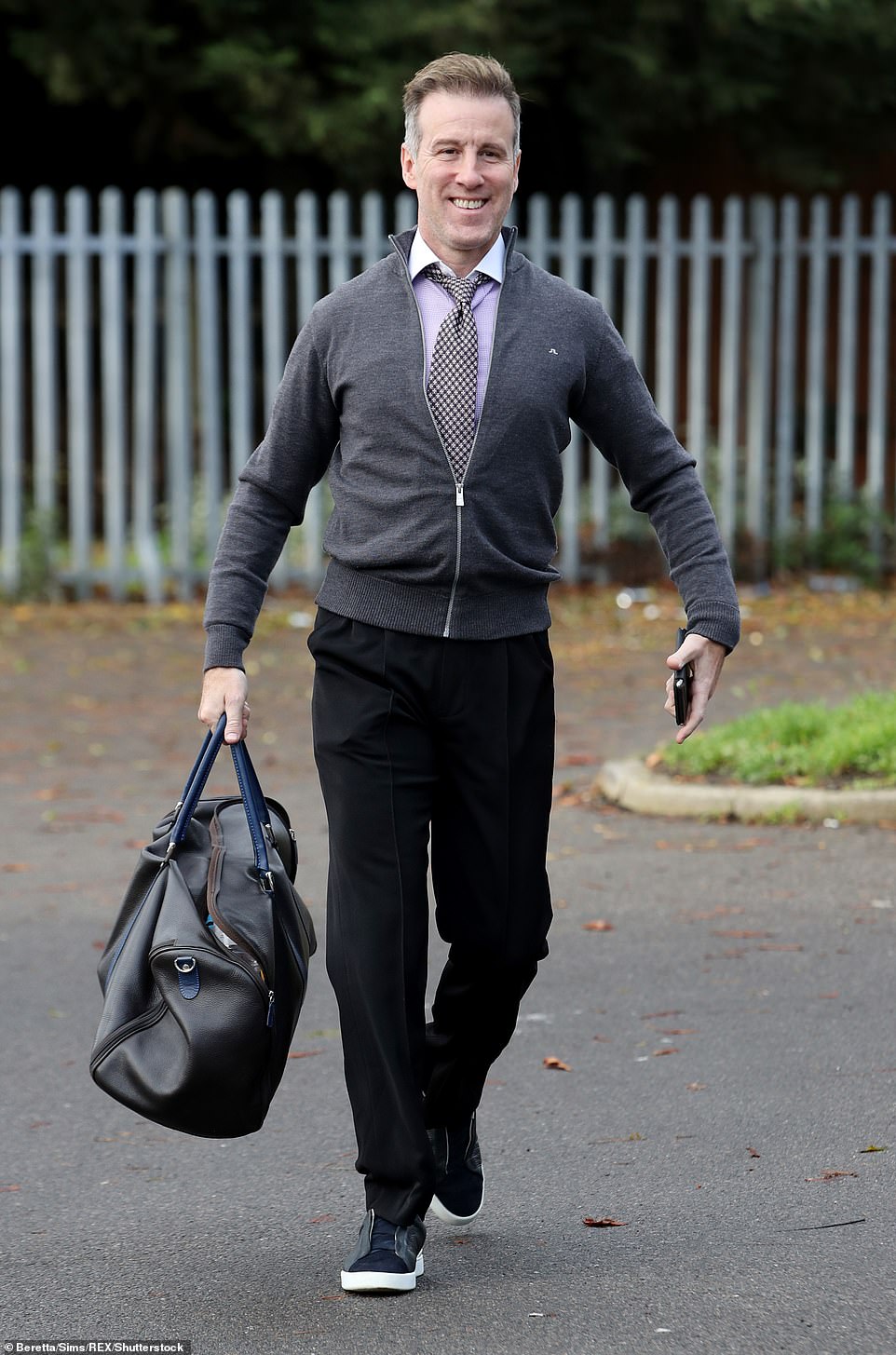 Legend: For years fans have lobbied for Anton to land a job on the Strictly judging panel, given he is the show’s longest serving professional dancer

Motsi took to Instagram on Thursday to tell fans she would not join Shirley Ballas and Craig Revel-Horwood at the studios on Saturday, after having to travel back to Germany for an ‘urgent trip’.

She wrote: ‘Hi Guys – earlier this week I needed to travel to Germany for an urgent reason. I will of course be following the UK Government guidelines and self-isolating for 14 days.

‘I’ll be watching from home and by the power of technology, should be in your living rooms. Watch out though, I’ll be doing my own hair and make-up!’

UK lockdown rules prohibit international travel except in ‘limited circumstances such as for work or for education’. 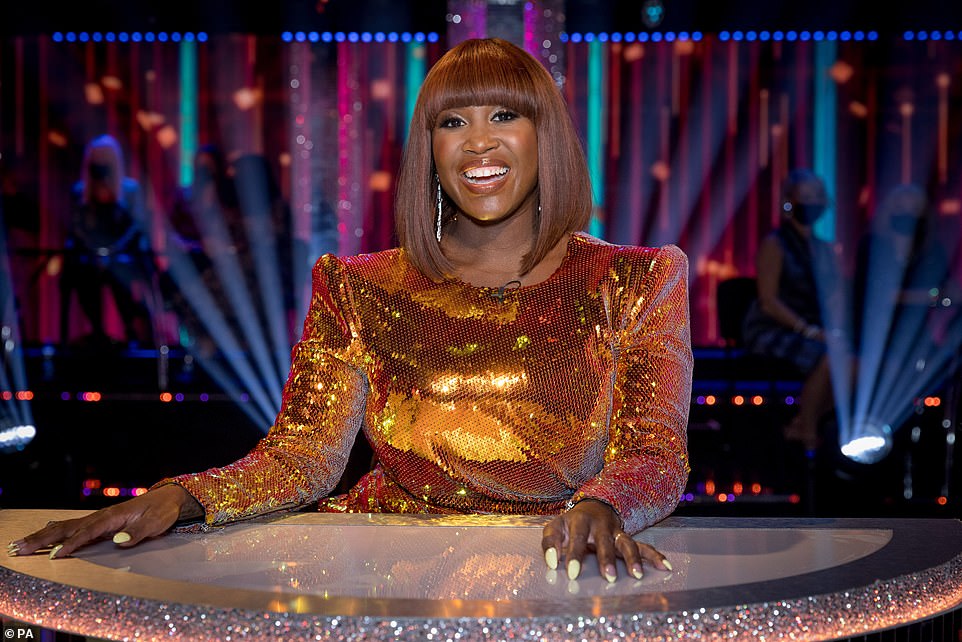 Taking a break: Motsi announced she would absent from the show for two weeks while she quarantined after returning home from Germany

Saturday’s show was also the first not to feature Katya and Nicola after they were forced to leave the competition due to Katya contracting COVID-19.

A Strictly representative confirmed to MailOnline that bosses are not launching an investigation into how Katya contracted the virus as there is no way to indicate where she may have caught it.

They added that as the dancer lives alone and has only been leaving her house to train, she hasn’t been socialising with others.

It is understood that a number of crew members have also been forced to self-isolate after coming into contact with Katya.

This also means that the Strictly final next month will feature just four couples instead of the planned five.

Shortly after Strictly confirmed news of the couple’s exit, Katya posted on Instagram that her ‘heart is broken’, before paying tribute to her partner. 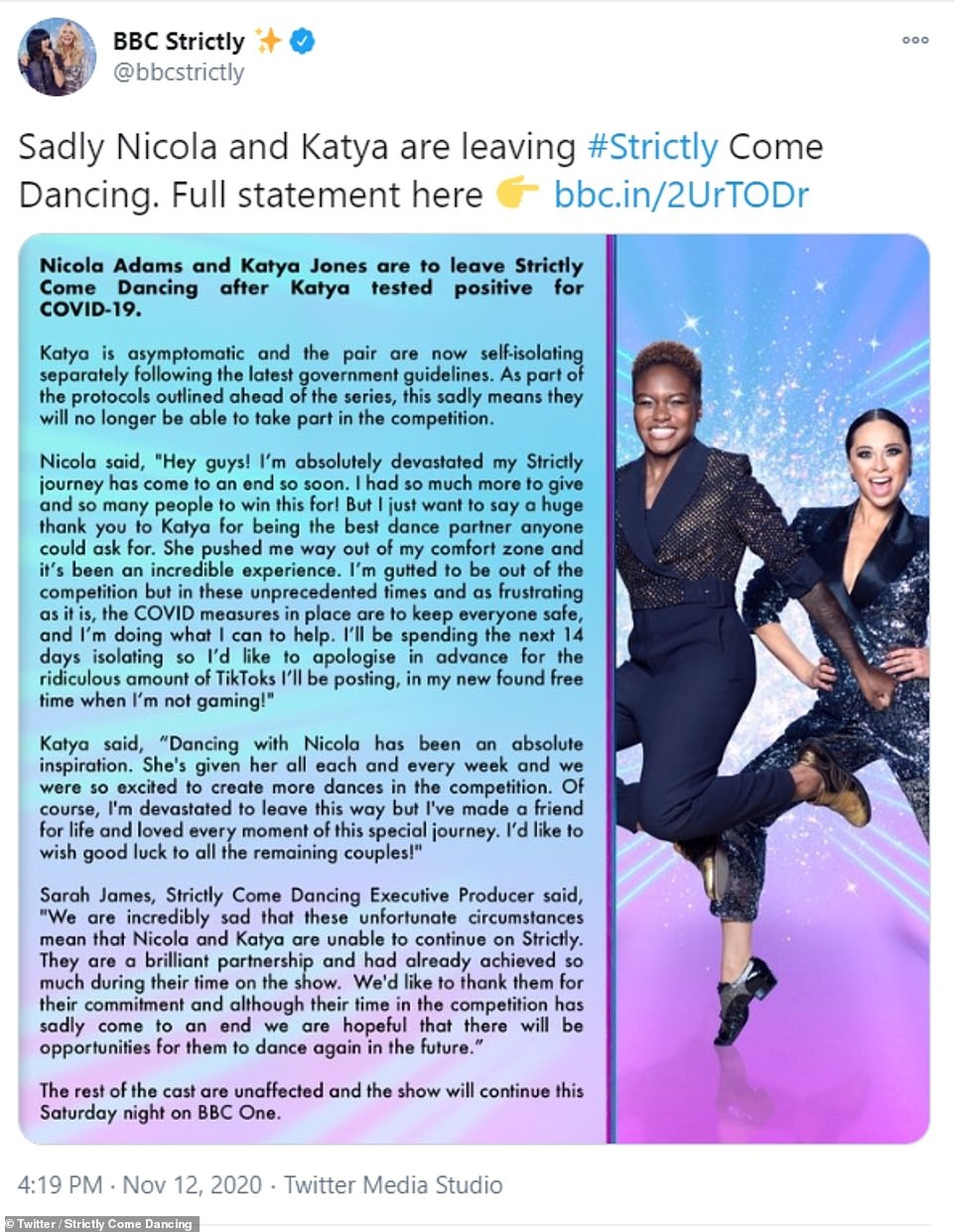 Tragic: Strictly bosses confirmed Nicola and Katya’s departure in a statement they posted on social media

A Strictly spokesperson confirmed to MailOnline that Katya is asymptomatic and the pair are now self-isolating separately following the latest government guidelines.

Nicola and Katya’s pairing made history as it was the first time in the show’s 16-year history a celebrity and professional partner of the same gender would be competing together.

Strictly bosses have also confirmed that Nicola will not be returning as a contestant on next year’s show.

In a statement read out by Andrea McLean on Friday’s Loose Women, bosses explained that Nicola would be too far advanced in the competition to return in the future as she would have an ‘unfair advantage.’