Strictly Come Dancing pro Anton Du Beke made history after 15 years on the show, as he earned his first ever tens during a Blackpool dance spectacular.

The dancer and actress Emma Barton wowed the judges with an elegant American Smooth to Let’s Face The Music And Dance by Ella Fitzgerald, in a show which also saw Kelvin Fletcher and Karim Zeroual finish in joint first place on the leaderboard.

The shock score sparked an elated reaction from pro Anton, as it was the first ever time he earned the maximum number of points from a judge in his 15 years on the show.

WOW! Strictly Come Dancing pro Anton Du Beke couldn’t contain his emotions in Saturday’s Blackpool Spectacular, as he earned his first ever ten after 15 years on the show, for an American Smooth with Emma Barton

Known for his elegant ballroom routines, Anton pulled out all the stops for the dance which could have been plucked from a classic Hollywood musical.

Packed with lifts, the elegant routine was praised as the duo’s best dance to date, with Shirley Ballas praising: ‘You covered everything there, I thought your facial expression was correct for this dance it was beautifully executed, the pivots you picked up at the end was gorgeous by far your best dance so far.’

Bruno Tonioli added: ‘Oh glamorous glossy classy sophisticated and it’s not me it’s her! It was like watching one of those 1940s movie queens it really had the character down to a wonderful finish,  I loved the build-up at the end, great job!’ 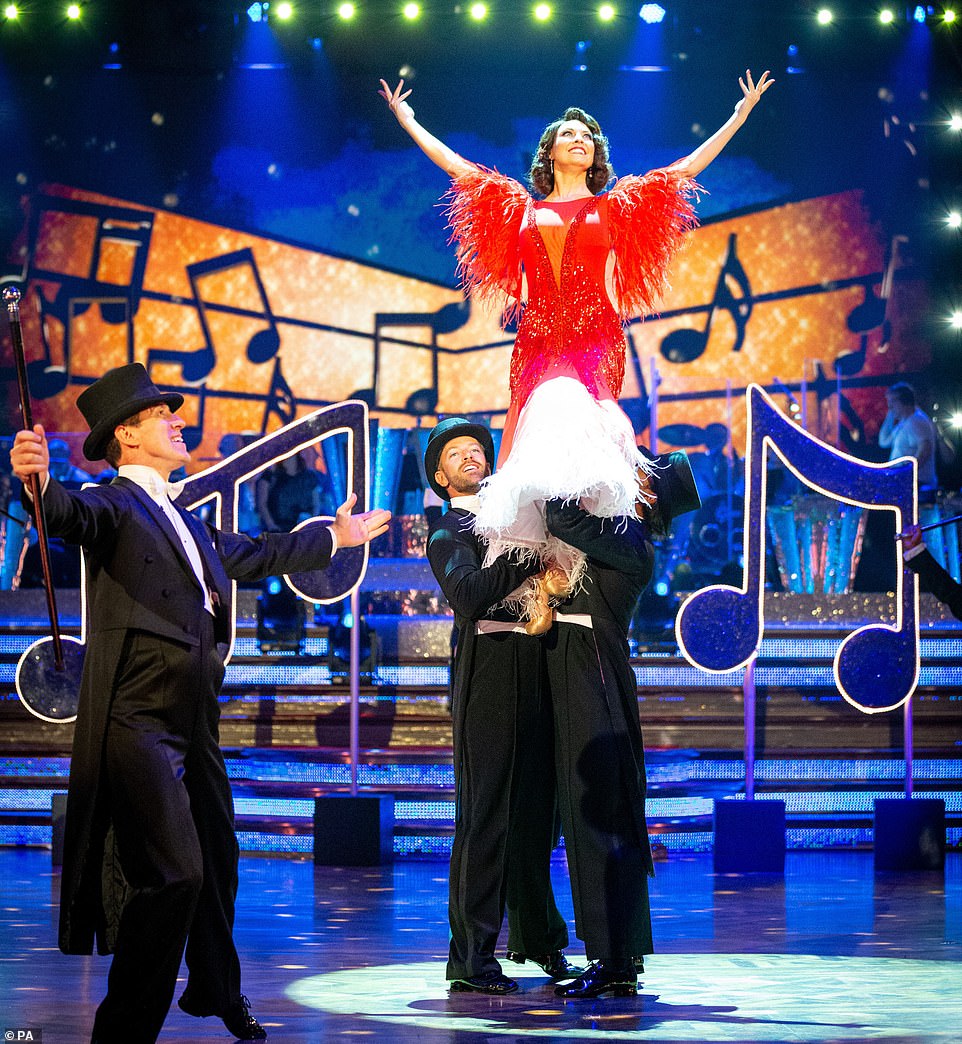 Sensational: The dance to the Ella Fitzgerald hit Let’s Face The Music And Dance could have been plucked from a Hollywood musical, and left the judges in awe 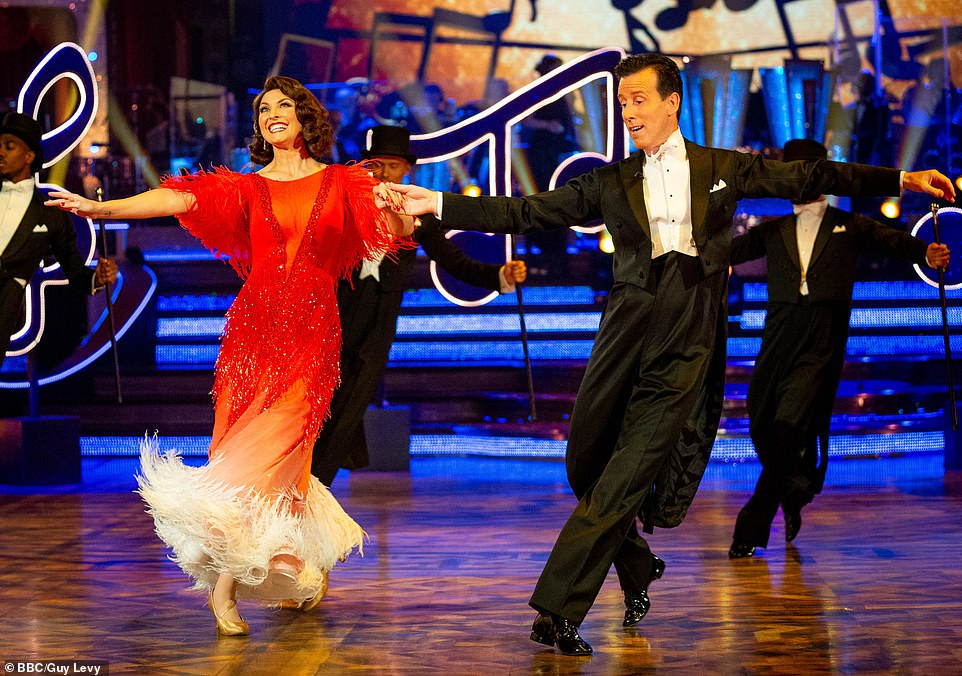 Showstopping: Packed with lifts, the elegant routine was praised as the duo’s best dance to date, by head judge Shirley Ballas

YES! Alongside the positive comments, Emma and Anton were completely floored when they earned ten points from both Shirley and Bruno, making it their highest score of the series so far

Alongside the positive comments, Emma and Anton were completely floored when they earned ten points from both Shirley and Bruno, making it their highest score of the series so far.

Anton – who is the only professional to feature in every series of Strictly – also earned a ten for the first time ever, after previously coming closest with Kate Derham in 2015 with a score of 35 points out of 40.

The British pro collapsed to the floor in elation after seeing his score, which was also the highest mark he’d ever received on the show, screaming to Claudia: ‘First ever 10s! 17 series! You don’t understand!’

Fans also took to social media in celebration as they praised Anton for finally earning the top score after more than a decade of trying. 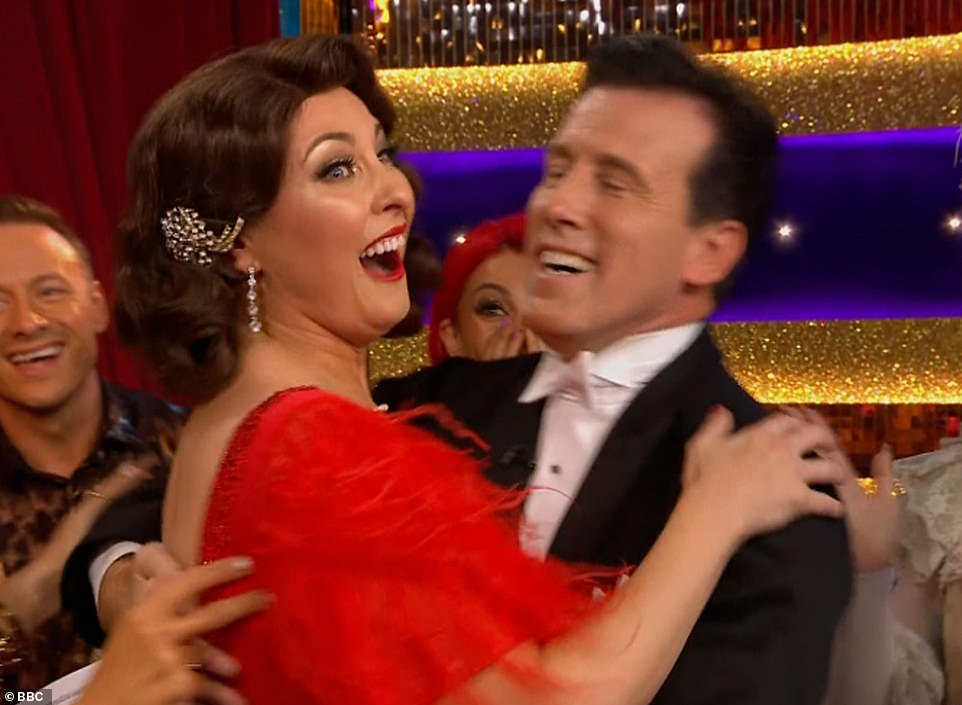 Over the moon: Anton collapsed to the floor in elation after seeing his score, which was also the highest mark he’d ever received on the show, screaming to Claudia: ‘First ever 10s! 17 series! You don’t understand!

The remaining seven couples delighted fans as they took to the dancefloor of the iconic Blackpool Tower Ballroom for a staggering night of performances.

Despite fans’ hopes that at least couple would earn a perfect 40 for their performance, Kelvin Fletcher and Karim Zeroual had to settle for scores of 39 each with their respective partners.

Kelvin channelled his inner Elvis Presley as he took to the floor with Oti Mabuse for a non-stop jive to the hit Jailhouse Rock.

Shirley admitted she was left ‘speechless’ by the danced, adding: ‘I don’t really know where to start, I do have to mention your coordination was superb that’s all I can say about that, you had great action, you owned it you gave it you controlled it I was impressed.’

As ever Craig found the tiniest of nit-picks, adding: ‘I thought the chassé could have been a bit lighter actually I’ve got some good things to say if you want to hear them I love that flying push up the strength the stamina the agility absolutely formidable. 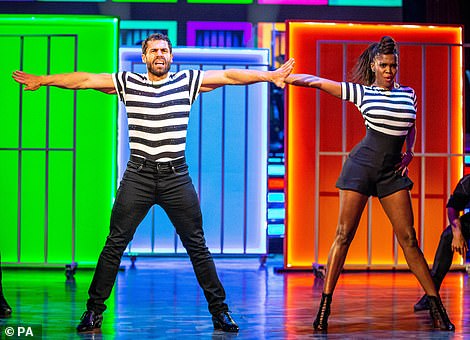 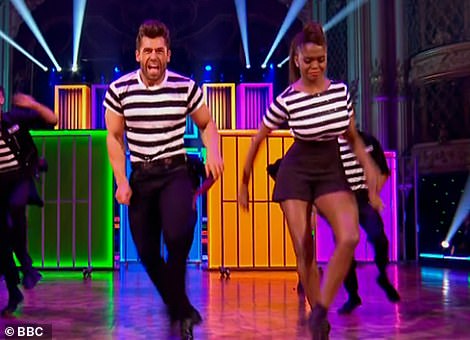 Strong: Kelvin Fletcher finished in joint first place on the leaderboard after performing a jive with Oti Mabuse to the Elvis Presley classic Jailhouse Rock 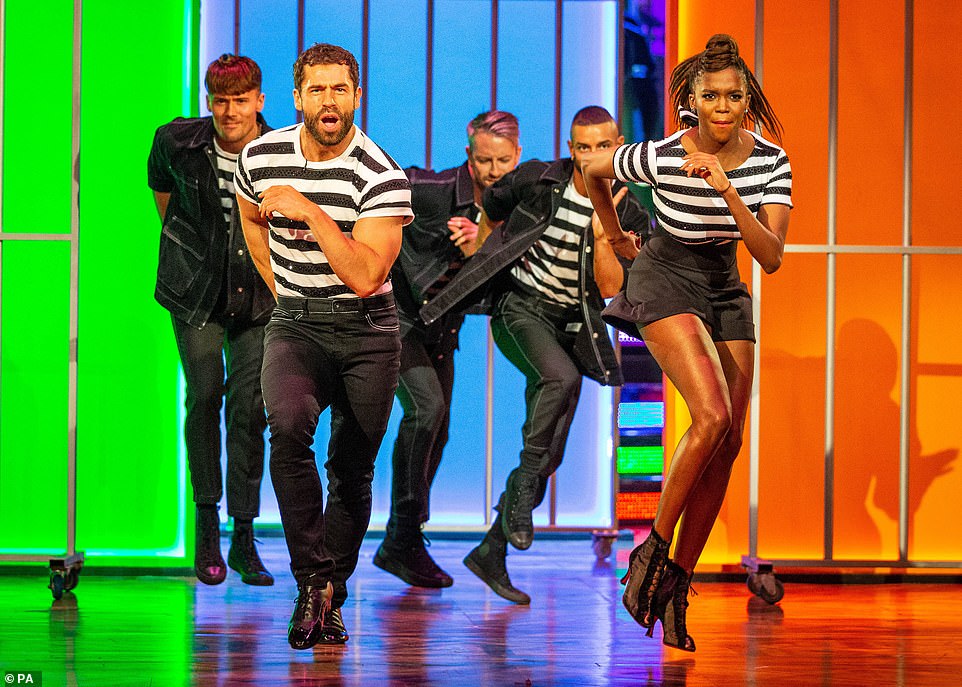 Sensational: As ever judge Craig Revel-Horwood found the tiniest of nit-picks in their performance, and the dynamic dancing duo came one point short of a perfect score

Regardless Kelvin still remains on the frontrunners for the series, alongside children’s presenter Karim, who danced an incredible Charleston with pro Amy Dowden.

The pair left the judges and audiences grinning from ear-to-ear with a fun dance to Happy by C2C feat. Derek Martin, which left Motsi struggling to find any other way to praise them apart from awarding a score of ten points.

She gushed: ‘I’m absolutely speechless, I’ve been judging this eight years in Germany I just don’t know I can’t give you more than this ten because it doesn’t justify how well you dance I will give you everything! I’m gonna give you my hairpiece and my dress!’

Through her hysterical laughter Shirley added: ‘Last week you made several mistakes and this week you were absolutely flawless! You look every so much like the professionals it was hard to tell one from the other, you are the star!’ 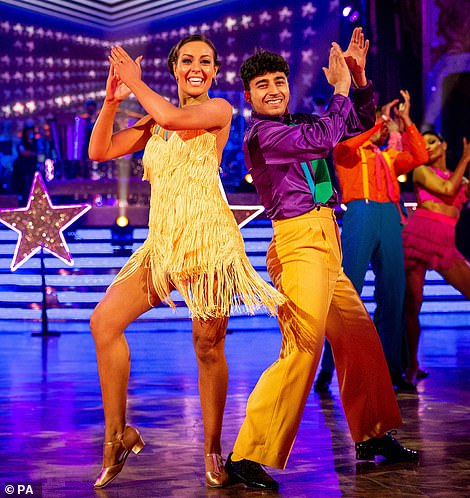 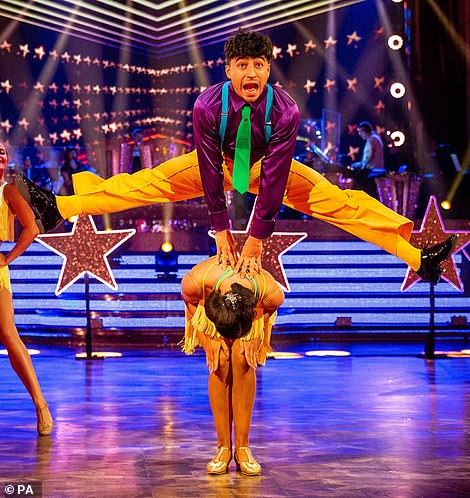 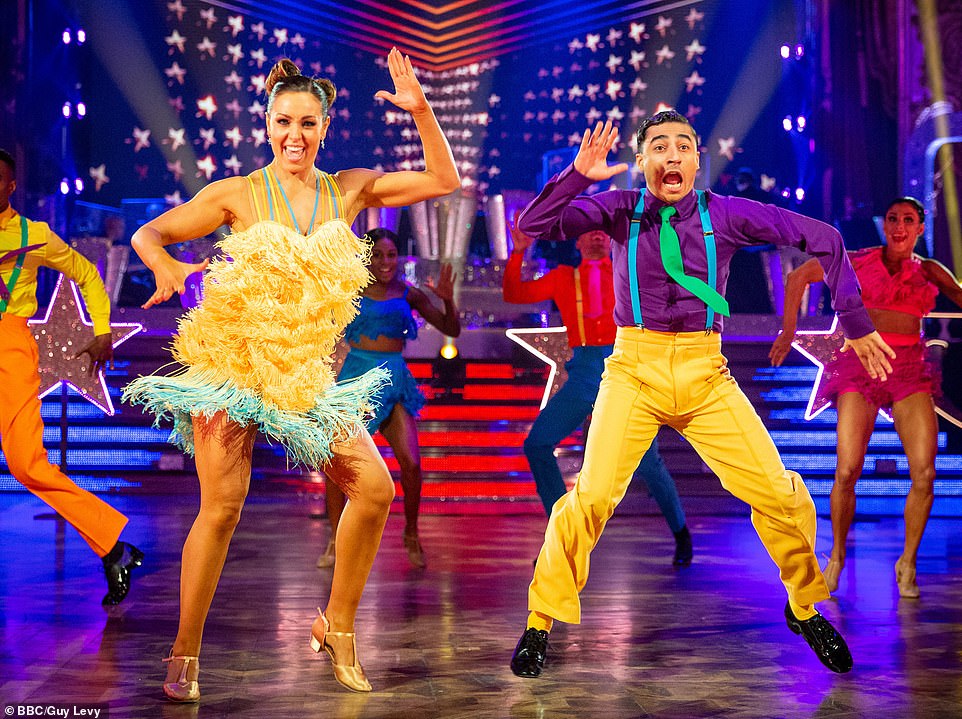 For Amy’s first time dancing at Blackpool during her time on Strictly, it certainly proved to be a memorable moment, and it seemed the entire audience – and the rest of the panel – were outraged when Craig still scored them nine points.

Meanwhile Chris Ramsey and Karen Hauer kicked off the Blackpool showcase in epic fashion with a high-energy Salsa to the Mark Ronson and Bruno Mars hit Uptown Funk.

After being told they ‘seriously needed to up their game,’ Chris brought the party to the Blackpool Tower for a dance set on a rollercoaster.

In a surprise move Chris was lifted into the air by the professional dancers as he showed off his epic hip movements in a routine which brought the house down. 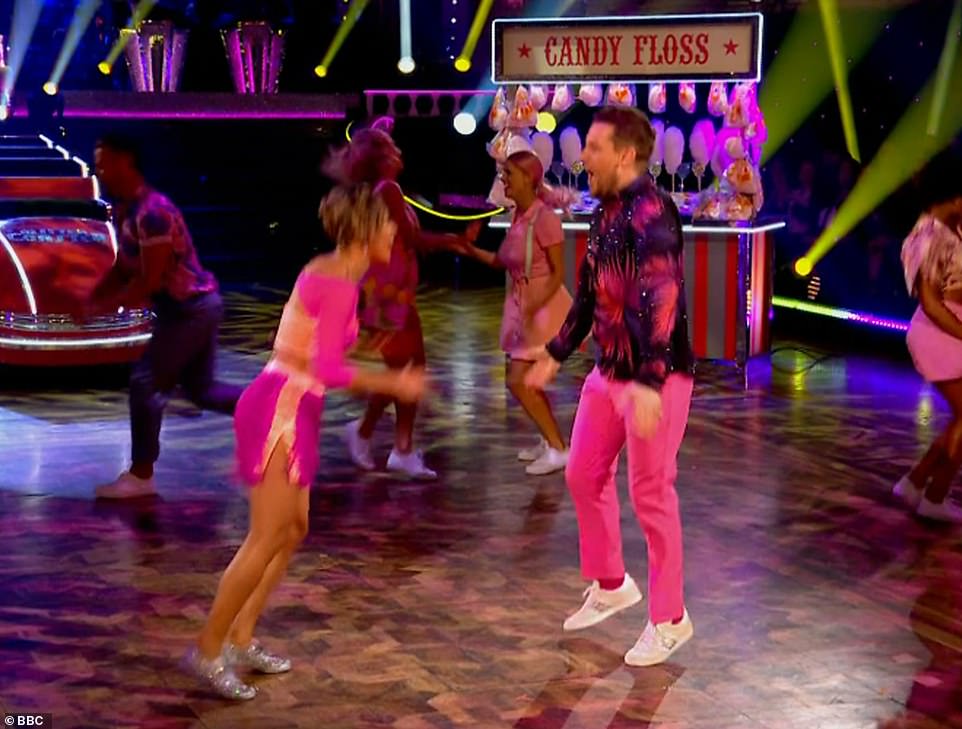 He’s got the moves! First to take to the floor were Chris Ramsay and Karen Hauer, who were performing a high-energy Salsa to the Mark Ronson and Bruno Mars hit Uptown Funk 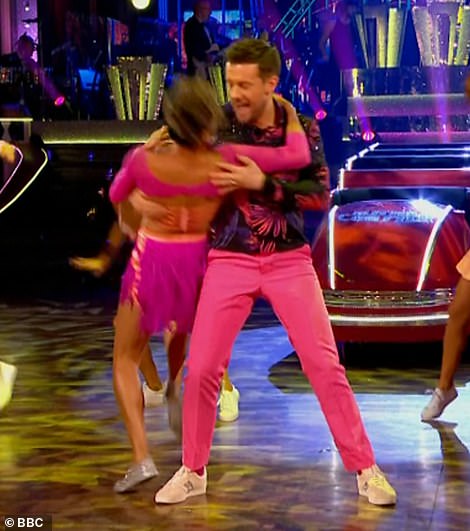 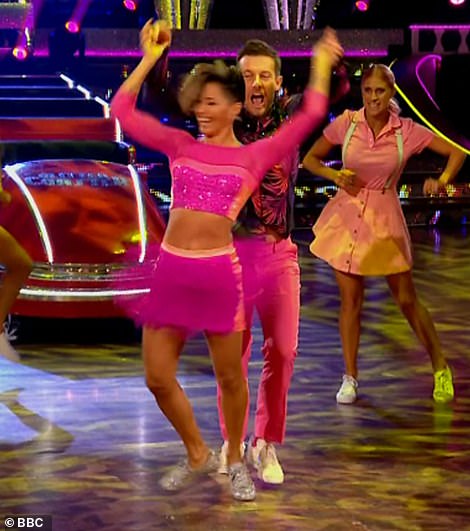 Bounced back: After being told they ‘seriously needed to up their game,’ Chris brought the party to the Blackpool Tower for a dance set on a rollercoaster.

As well as scoring their first nines of the series, Craig confirmed that he had upped his game, adding: ‘You did fit in with the rest of the group which is no mean feat.’

Shirley praised: ‘Nine weeks ago when you first started, you had never danced in front of an audience and look at you, you opened this show in Blackpool! You brought your groove I love your hot pink pants, you were all and everything we expected to start the show, well done!’

Alongside their first nines, Chris and Karen were thrilled with a score of 33 points out of 40, their second-highest to date. 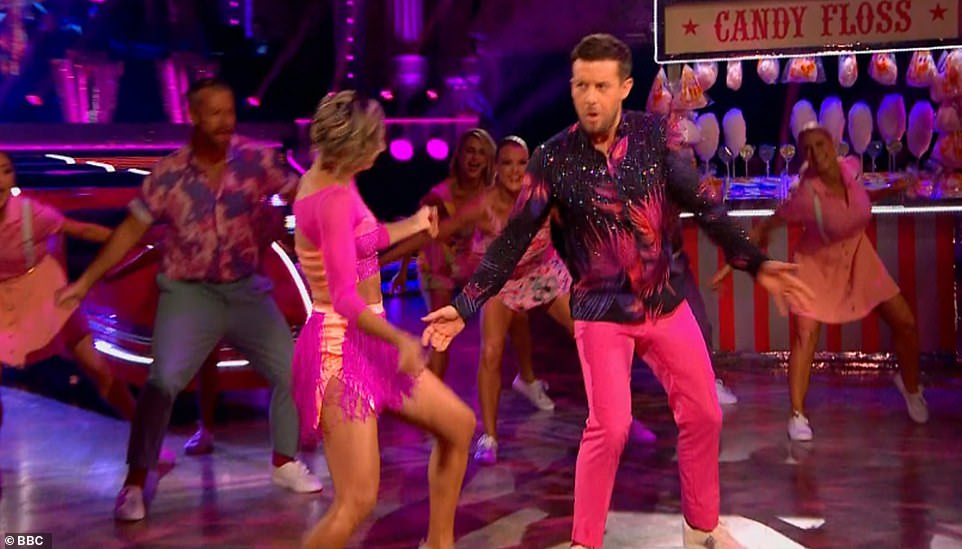 Sensational: Alongside their first nines, Chris and Karen were thrilled with a score of 33 points out of 40, their second-highest to date

Alex Scott and Neil Jones also took to the floor with a Girl Power- themed Paso Doble to the Beyonce anthem Run The World (Girls).

Commanding the dancefloor with a squad of female dancers, the former football star ensured that it wasn’t just her vast head of curls that commanded attention, as she earned plenty of praise from the judging panel for the empowering performance.

Motsi praised: ‘I’m so so proud of you I’m so proud of that dance what I really loved is that you let go you just came through and attacked the dance, a few things happened but you were on it and I loved it!’

Shirley added: ‘It was a pure girl Paso if ever I saw one!’

The pair earned another respectable score of 34 points out of 40. 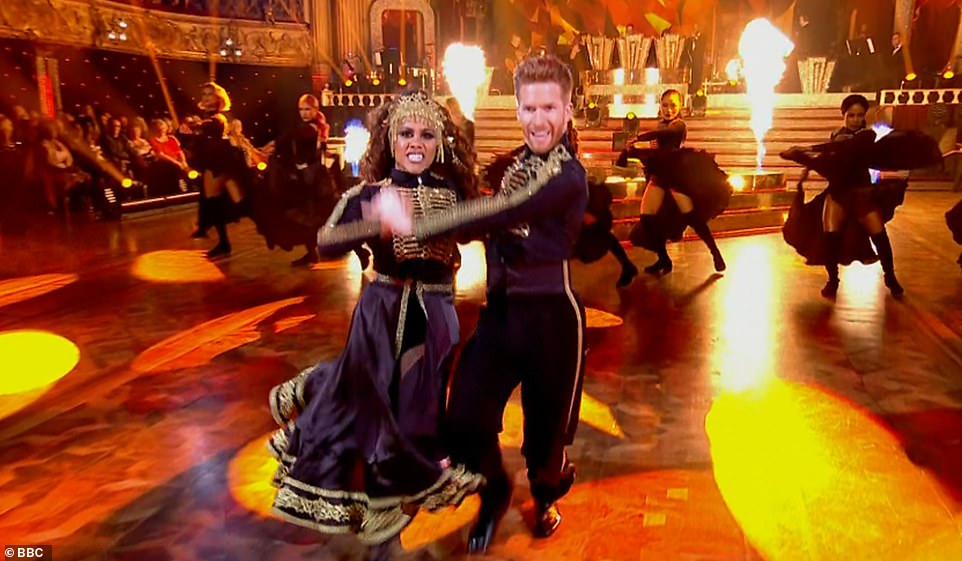 Girl power! Alex Scott and Neil Jones also took to the floor with a Paso Doble to the Beyonce anthem Run The World (Girls) after being praised for their progression last week 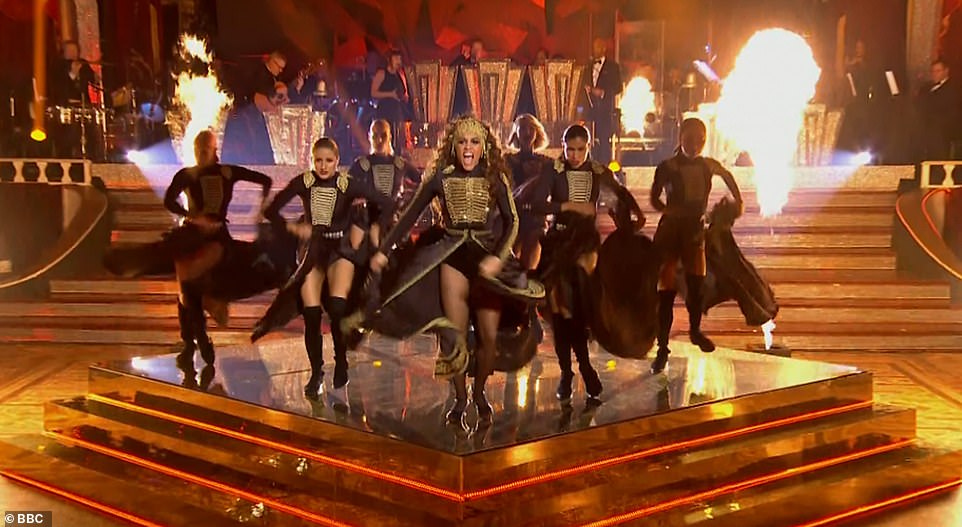 Epic: The former footballer commanded the dancefloor with a squad of female dancers and even channelled the Queen Of Pop herself with a head of dramatic curls 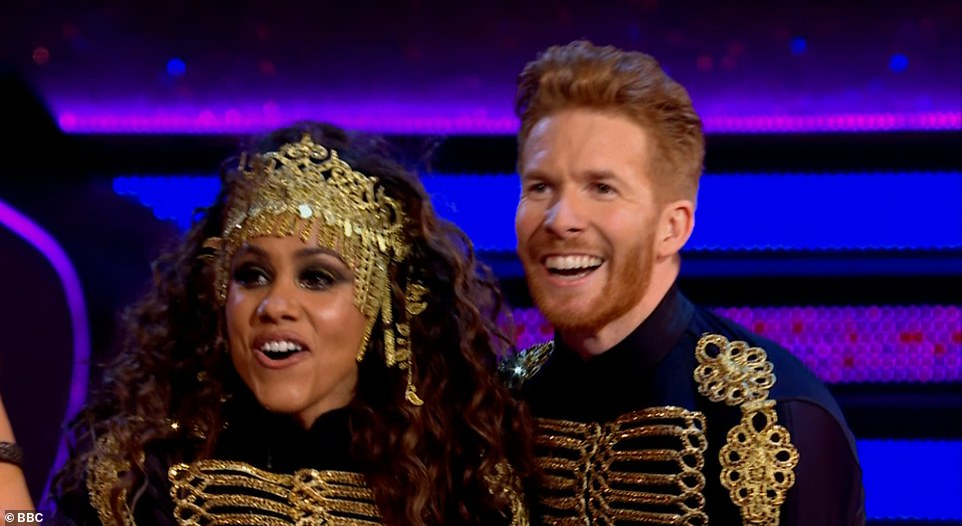 Doing well: Motsi praised Alex for letting go during the epic routine which saw her still impress despite being among a group of professionals, and she and Neil scored a respectable 34 points out of 40

Conducted by pro Kevin Clifton, the Blackpool spectacular kicked off with an epic group routine featuring both the pros and the celebrities as they prepared to take to the dancefloor.

Host Tess Daly cut a glamorous figure in a grey velvet gown with a thigh-high split, while Claudia Winkleman opted for a plunging gold sequinned suit.

After such an epic show, it remains to be seen which stars will survive the dreaded elimination.

Strictly Come Dancing: The Results airs on Sunday 17th November at 7:15pm on BBC One.