But there’s still a book of spooky spells, a suit of armour, a dolls’ house, and floor-standing candelabras to get. A £15 plastic hatchet, apparently, is stuck in the post.

Nothing is too outlandish – or impossible to find – for Strictly’s Halloween show this weekend.

‘There’s no end to the demands, particularly for this weekend,’ he explains. ‘In previous years I’ve had to find a flying dragon for Susan Calman, a skeleton that juddered as it came out of a cupboard and seven oversized headstones. Nothing fazes me any more.’

Back at the BBC studios, art school interns are hard at work carving grimaces into 40 pumpkins snapped up at a cash-and-carry.

Today, Bob has agreed to give The Mail on Sunday a sneak peek at frantic preparations for Saturday night’s favourite show, which is why we are racing around Farley Prop Hire in West London.

Most Strictly episodes are organised just a few days ahead, but the Halloween special attracts ten million viewers and Bob has been on the case for the past three weeks. 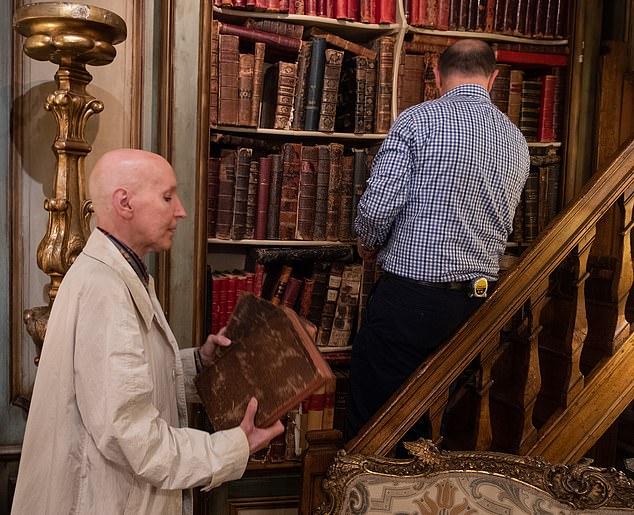 His phone is ringing non-stop with desperate requests. Can he tell them how to puff up Indian wedding garlands with a hair dryer? Can he get more candles plus black, purple, green and gold glitter?

‘From now on, the phone will ding, ding, ding with emails requesting this, that and the other. The usual question: ‘When’s it all arriving?’

But Bob is an expert, Farley’s is one of the best in the business and with candelabras, armour and spell book located, the show will go on.

Eagle-eyed viewers will have spotted the book during last night’s Charleston by Ashley Roberts and Pasha Kovalev, and the dolls’ house in the background to Seann Walsh and Katya Jones’ Viennese Waltz.

It turns out Bob is a legend in the props business, a Bafta-winner, credited on nearly every major BBC show of the past 50 years. He has worked on Strictly since its creation in 2004. 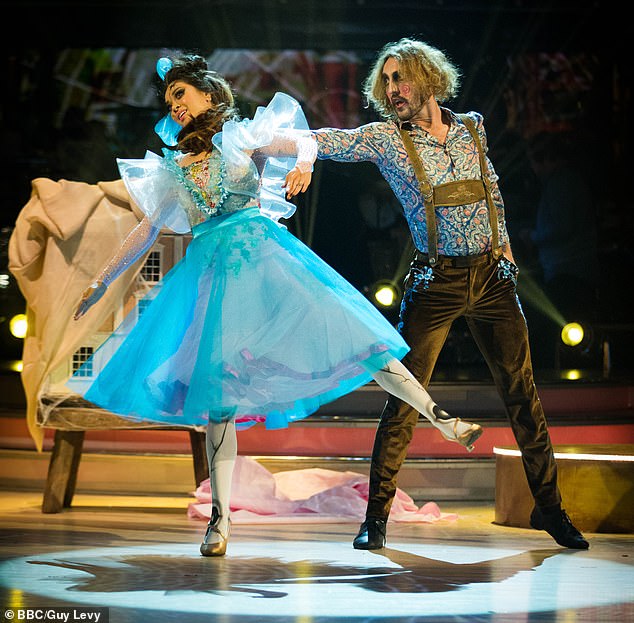 FOUND IT: Dolls’ house with Seann and Katya on Halloween special of Strictly

His weekly challenge is to get all the props to Elstree Studios, Herts, by 9am on Friday for rehearsals.

‘This week, they were desperate for more black velvet,’ he says. ‘But the Friday before we’d had a brief for a shocking pink ostrich feather arch. On Friday they wanted to change the colour to turquoise, gold and white. I phoned my lovely feather man who promised to bike them over for 9am on Saturday. They turned up at 5pm. It was a very stressful afternoon.’

Bob’s route to Strictly began, age 18, in 1968 when he joined the BBC as a clerk after art college. He was quickly sent to the props department, where he stayed – working on Z Cars, Dixon Of Dock Green, The Morecambe & Wise Show and Absolutely Fabulous.

While with The Two Ronnies he bought props for the famous ‘four candles’ sketch. And Ronnie Barker once asked him for a chocolate teapot. ‘I said, ‘Do you want plain or milk,’ ‘ Bob recalls. ‘Well, he roared with laughter but I did want to know what colour. I had four dark ones made in the end.’

He also picked prizes for the Generation Game and Blankety Blank, where Les Dawson requested prizes the ‘crappier the better’.

For now Strictly is top of the props, although next year he’ll work on Simon Cowell’s The Greatest Dancer with Cheryl Tweedy. 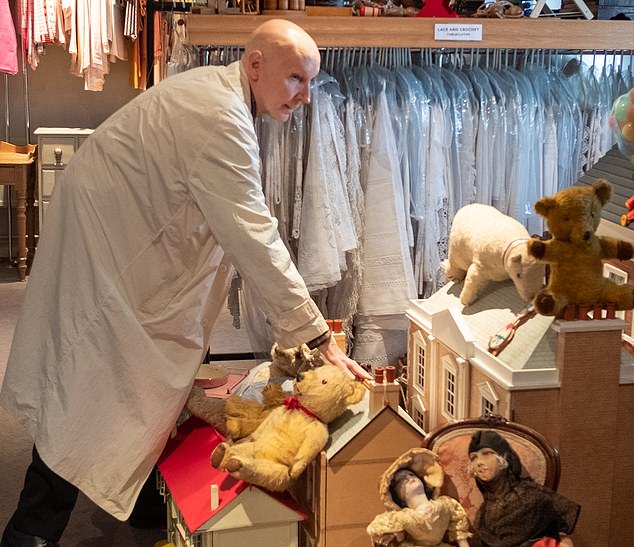 Bob (pictured) is a legend in the props business, a Bafta-winner, credited on nearly every major BBC show of the past 50 years. He has worked on Strictly since its creation in 2004

Strictly’s scenery and set furniture is knocked up in MDF by the show’s carpenters – with trees this week made of polystyrene.

He’s already made two Glitterball trophies for the winners, and the big one for the finale. ‘Every year, when they pick it up, I think, ‘Oh no, the base is gonna fall off.’ ‘

He’s also responsible for the judges’ ghoulish Halloween scoring paddles, made from plastic.

‘We had to stop the judges from giving signed ones away,’ Bob says. ‘Everyone wanted a 10, of course. It was getting a little expensive.’

Not every prop can be given away, reused or recycled: take the infamous cannon astrologer Russell Grant was shot from in series nine. ‘It’s in storage now and won’t be used again,’ Bob admits. ‘It was built for his, erm, rotundness.’

He clearly loves his job, saying: ‘It’s the nearest I’ll get to a Hollywood film. Strictly’s a prop-buyer’s dream.’

Tonight, as ever, Bob will settle down to watch the results show and admire his handiwork.

As for the MDF, the polystyrene trees and that plastic hatchet?

‘Good lighting is our best friend,’ he admits.