Strictly’s HRVY has admitted he ‘loves’ co-star Maisie Smith and he thought she ‘looked incredible’ when he saw her wearing the glittering blue dress for the launch show.

The YouTube sensation, 21, said he ‘can’t wait’ to see the EastEnders actress, who plays Tiffany Butcher, ‘grow and look amazing every week’, hinting there could be romance on the horizon once the series ends.

It comes after Maisie, 19, and HRVY raised eyebrows when they engaged in a flirty exchange on Instagram, as they are forced to stay apart due to strict social distancing guidelines.

‘Amazing’: Strictly’s HRVY, 21, has admitted he ‘loves’ co-star Maisie Smith, 19, (pictured) and hinted romance could be on the horizon, following their flirty exchange earlier this week

Speaking to The Mirror, HRVY said: ‘I love Maisie, she’s a great girl and has got great banter.

‘When I saw her in her blue dress last week, she looked incredible. I can’t wait to see her grow and look amazing every week.’

The BBC guidelines mean stars are in a support bubble with their dance partner and they must keep a social distance and wear a mask when around other contestants. 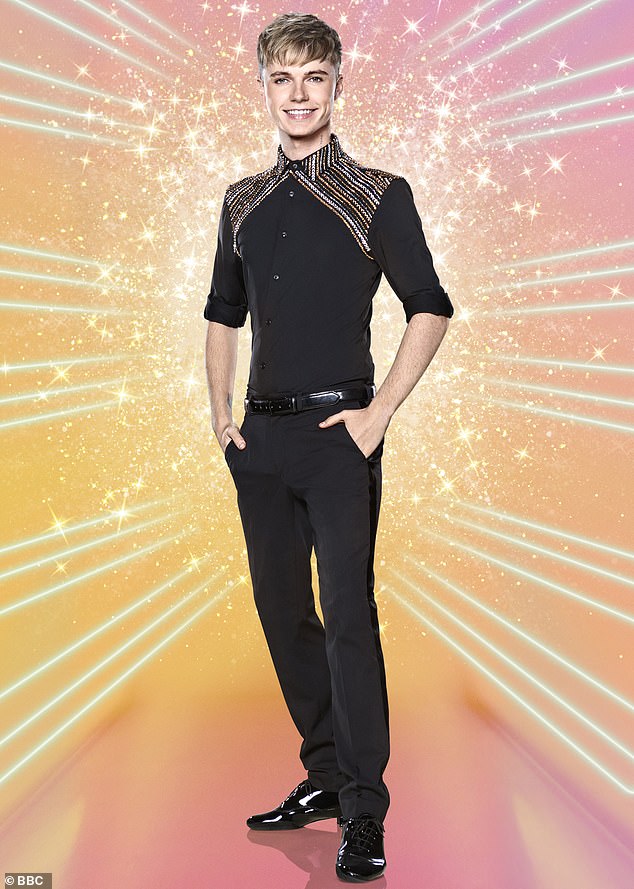 Pals: HRVY revealed how he and Maisie, who are the youngest contestants on this year’s series of Strictly, are ‘great friends’

HRVY revealed how he and Maisie, who are the youngest contestants on this year’s series of Strictly, are ‘great friends’, with the star focused on improving with dance partner Janette Manrara.

He added: ‘I am going to focus on the dancing, and all that stuff can come second, but who knows what will happen after the show!’

It comes after HRVY set pulses racing when he stripped down to his pants in shots for his 2021 calendar, sharing shots that caught Maisie’s eye. 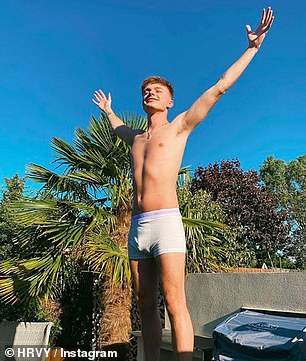 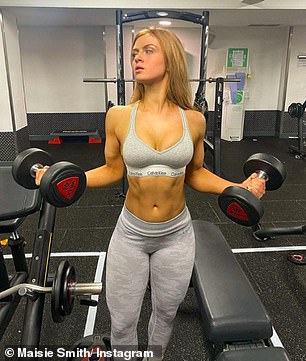 Ch-ch-cheeky! Maisie and HRVY raised eyebrows when they engaged in a flirty exchange on Instagram earlier this week 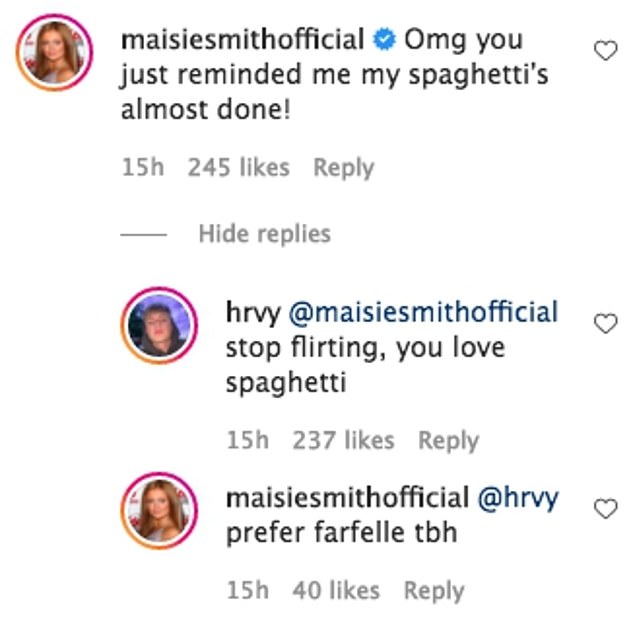 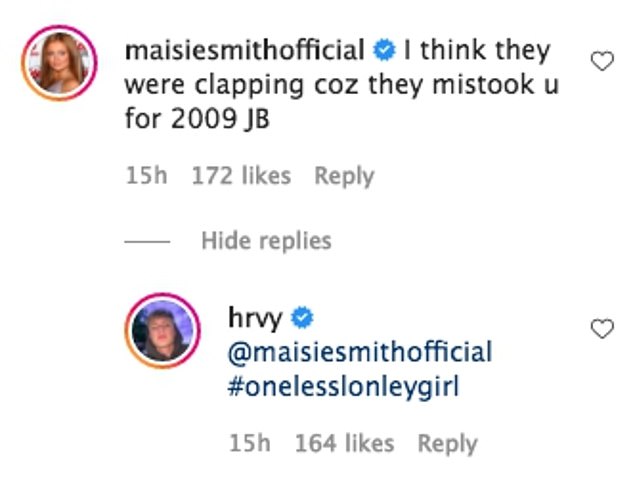 Quickstep or quick wit? HRVY set pulses racing when he stripped down to his pants in shots for his 2021 calendar, sharing shots that caught Maisie’s eye

Alongside three black and white shots showing himself in a various stages of undress, HRVY wrote: ‘fun fact: the window blinds were open and a whole office floor in another building stood and clapped as I got undressed (2021 calendar out now)’.

However HRVY – real name Harvey Cantwell – was quick to hit back: ‘@maisiesmithofficial stop flirting, you love spaghetti’, to which she teased, ‘prefer farfelle tbh’. 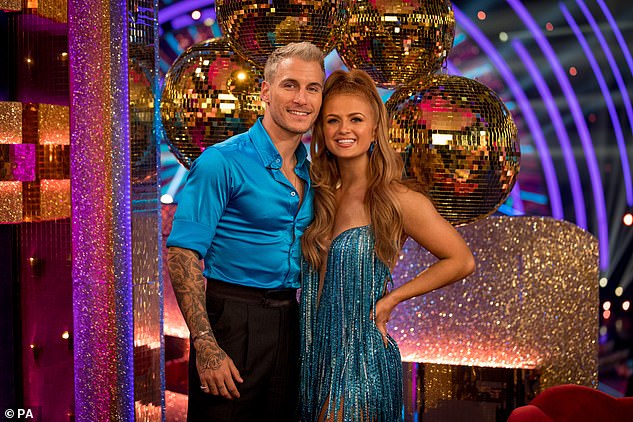 Delightful duo: Maisie is partnered with Gorka Marquez. They will perform a Samba to Gloria Estefan’s Samba when the series kicks off on Saturday night

The EastEnders actress then compared him to heartthrob Justin Bieber, penning, I think they were clapping coz they mistook u for 2009 JB’, to which HRVY cheekily replied, ‘#onelesslonleygirl’.

Maisie then posted a third comment on the snap, joking: ‘The Rock been real quiet since u posted this ..’

Maisie wasn’t the only member of the Strictly family to rib the singer, with her professional partner Gorka Marquez quipping: ‘@hrvy do you want to borrow my set of Dumbbells?’ 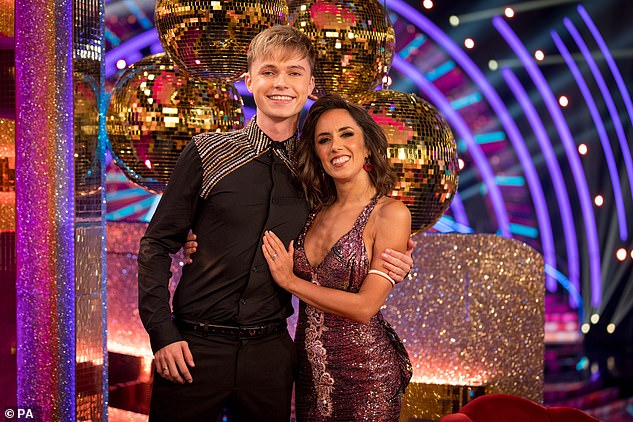 Pocket rockets: HRVY will be hoping to lift the Glitterball Trophy with Janette Manrara by his side. They are set to perform a Jive to Faith by Stevie Wonder feat. Ariana Grande

Made In Chelsea’s Jamie Laing then joked: ‘Is that you changing for the first time?’

HRVY did get some encouragement, however, from his partner Janette Manrara, who quickly commented, ‘Okay…. okay….’ with a flame emoji.

Maisie and HRVY are the youngest contestants on this year’s series of Strictly, and have admitted they are keeping a close eye on each other’s progress. 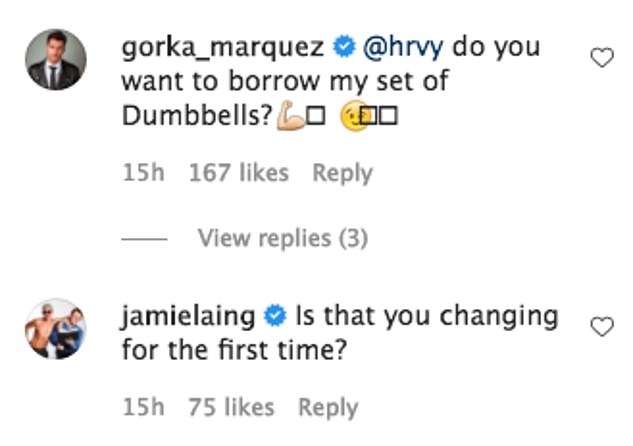 Not dancing around the subject: HRVY’s Strictly co-stars Gorka, Janette, Jamie Laing and Max George were also quick to comment on the steamy snap

Speaking earlier in the month, Maisie was asked who she thinks her ‘biggest competition’ could be on the show, to which she revealed: ‘I’ve spoken to HRVY actually, and he said he feels like he’s got a bit of competition and I said “Ditto!”

‘So, I feel he’s my biggest rival! I haven’t spoken to anyone yet but I’m looking forward to seeing them all soon.’

Meanwhile, HRVY revealed: ‘I messaged Maisie saying, “I guess you’re my competition this year then?” 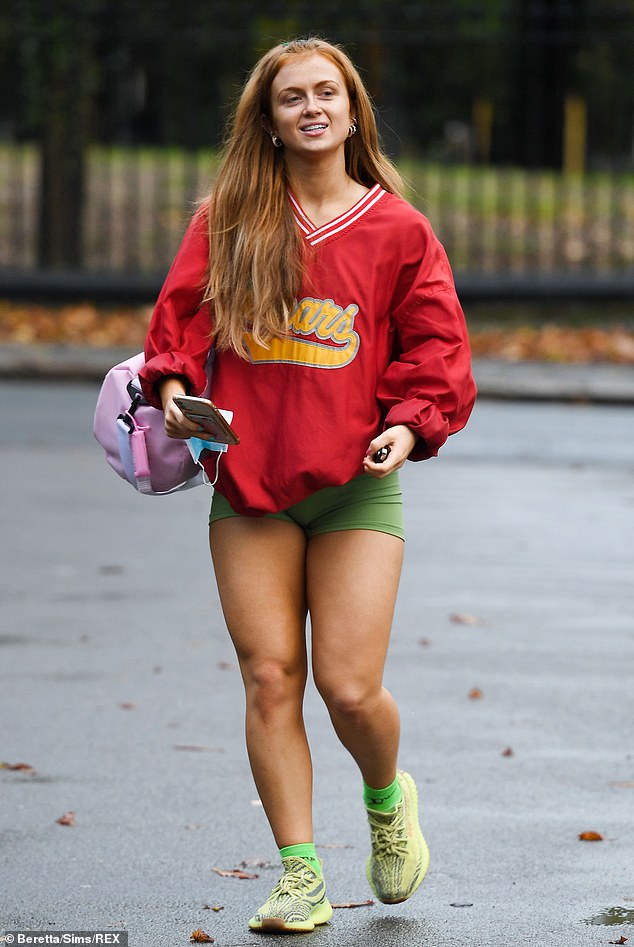 Feeling the heat: Maisie and HRVY are the youngest contestants on this year’s series of Strictly, and have admitted they are keeping a close eye on each other’s progress

‘Obviously everyone’s my competition but I saw her on the Children in Need special and she’s really good.

‘I DM’d her and said it was very average just so she wasn’t too big headed about it!’

Maisie won the Children in Need special with Kevin Clifton last year – making her a favourite to win the BBC series.

Strictly Come Dancing airs on Saturday at 7:25pm on BBC One. 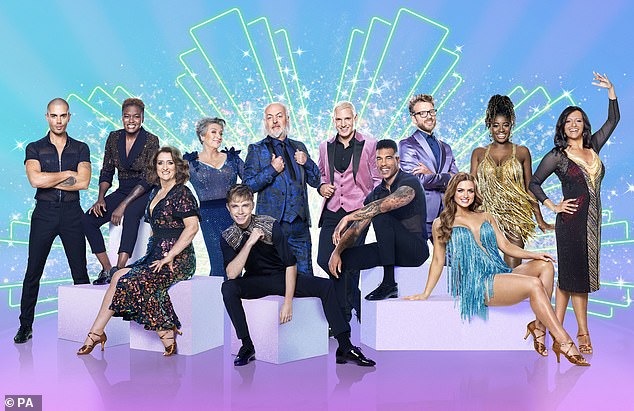