After 20 years on the show, Strictly Come Dancing’s Tess and Claudia have reminisced on both their personal and professional lives during the two decades spent on BBC One’s hit show.

The ballroom dancing television series has seen hundreds of celebrities giving 13 weeks of their year to a Samba, Waltz, Jive or something in-between.

But the two constants of the show have been blonde and brunette duo Tess Daly, 53, and Claudia Winkleman, 50, who have celebrated Strictly’s 20th birthday by recalling some of their most memorable moments.

Duo: After 20 years on the show, Strictly Come Dancing’s Tess and Claudia have reminisced on both their personal and professional lives during the two decades spent on the hit show

One particular stand-out memory for Claudia was while she presented It Takes Two, the spin-off midweek show which sees the presenter get more intimate with the celebs and their professional partners.

She recalled when she had morning sickness while filming, leading her to have a bucket behind the chair so she could throw up during the video tape breaks.

‘I loved It Takes Two, it’s such a brilliant job because you are absolutely immersed but you feel like a sort of renegade and can be quite anarchic,’ Claudia said. I would dance with Len and we’d end up doing Roly polies! And nobody seemed to mind!

‘On It Takes Two I had morning sickness and there was this a bucket behind the chair as I would throw up during every VT, which was really quite a lot for the crew to deal with.

‘When my son was one I would take him to work and he would often be hiding behind a sofa with a toy.’

Speaking about the crew being her ‘extended family’ as she had her two daughters during her time on the Strictly team, Tess Daly explained: ‘It feels like we’ve grown up together.’ 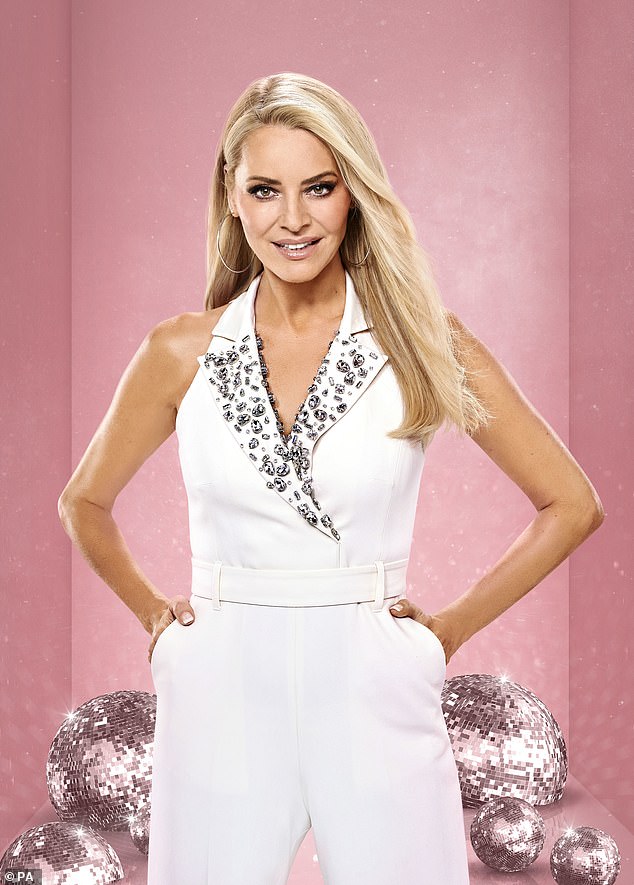 Family: Tess described the the crew as her ‘extended family’ as she had her two children during her time on the Strictly team: ‘It feels like we’ve grown up together’

‘I was pregnant with my eldest daughter Phoebe during Series One, back in 2004, and now she’s about to turn 18!

‘The crew who work on the show are nothing but the best, they are the not only the greatest at what they do, but just the greatest people.’

Blonde beauty Tess remembered feeling out-of-her-depth by the big names on the show when she first joined.

‘I remember being so intimidated because I was working with the late, great, Sir Bruce Forsyth, someone who I had grown up watching on the television with my family, and it was pure pinch yourself stuff,’ she said.

‘He was such a gentleman and made me feel immediately at ease by offering to make me a cup of tea.

‘He popped the kettle on and made me the perfect cuppa, and I just remember thinking, ‘”Oh my goodness, he’s just like the rest of us.”

‘He was just so down to earth and so generous with his time and himself, so from that moment on I just began to enjoy the ride.’ 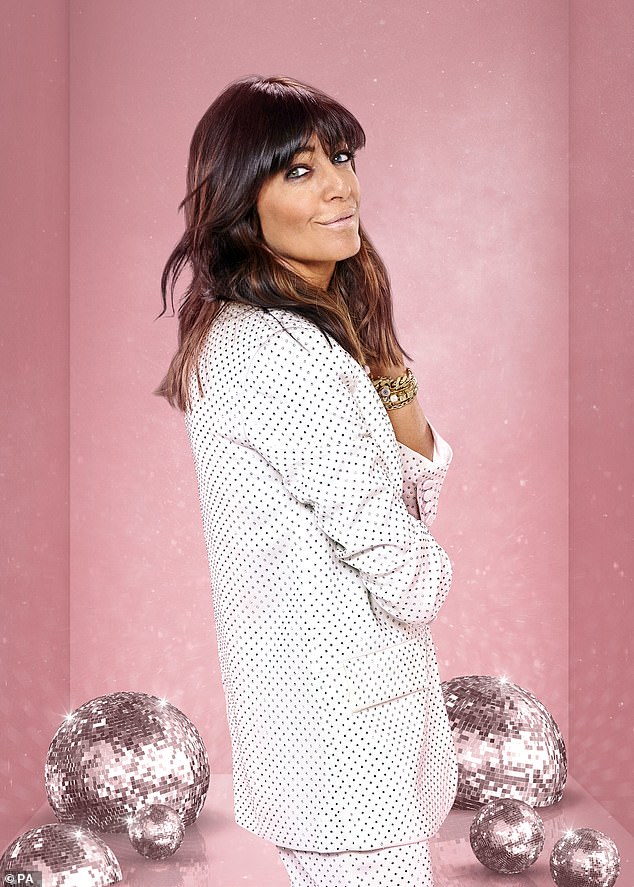 Dedicated: One particular stand-out memory for Claudia was while she presented It Takes Two, she recalled when she had morning sickness while filming

As for their favourite dances – Tess says her favourite to watch is the Argentine Tango, while Claudia favours ‘mowing the lawn’ when breaking out the moves herself.

‘I pretend that I’m mowing the lawn, which is hilarious because I don’t have a garden and I’ve never had a lawn mower,’ Claudia said. ‘But its powerful.’

Tess also recounted her own Strictly win while competing in the Children in Need special in 2008, taking the glitterball trophy home with dance pro Anton Du Beke.

‘But it was a giggle because Anton is a gentleman and a joy to work with, so that was fun.

‘I remember at the time being so incredibly nervous and really empathising with our celebrities and what they go through with nerves.

‘Being so far out of their comfort zone and doing a live performance cannot be underestimated, it was, quite frankly, petrifying.’ 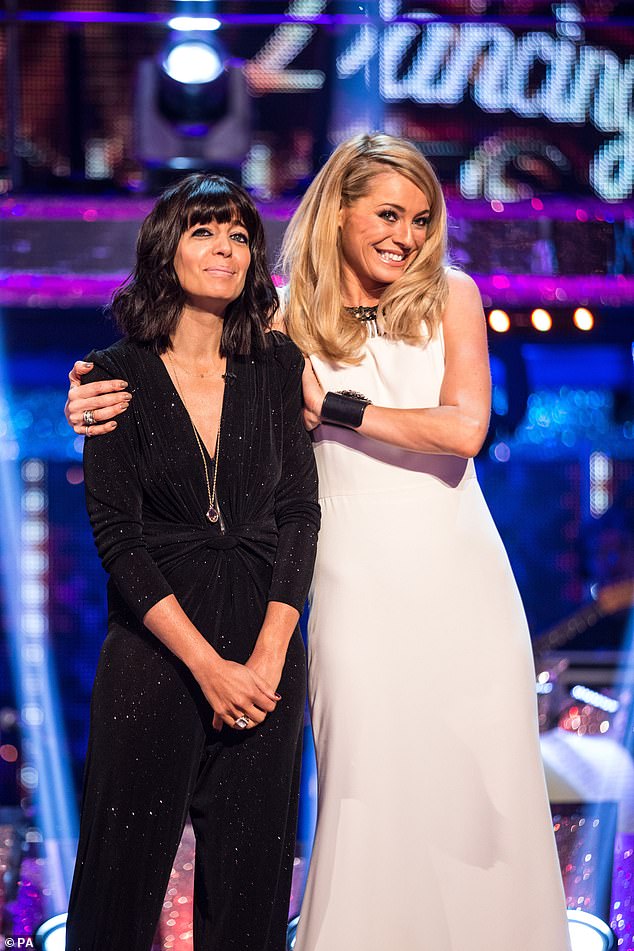 This series Strictly is returning to Blackpool – the presenting duo’s favourite week – after a two year absence.

Claudia said of the comeback: ‘Blackpool is without doubt the most welcoming place I have ever been in my life. It’s all about Blackpool.

‘One day there I ate fish and chips four times. I once did a conga with Peter Kay and Rick Astley. And the ballroom is so beautiful and inspiring, it knocks the breath out of you.’ Tess added that she is thrilled to return to the northern city.

Daly added: ‘The ballroom is iconic and the audience is so much bigger than our studio audience, so the atmosphere in there is just always incredible. And it feels really exciting to be a part of that.’

After starting the show in their 30s and now heading into their 50s, the duo have shared their gratitude for being part of one of the UK’s most-loved Saturday night shows.

Tess said: ‘We had no idea how the show would be received, it was a new twist on an old format, but we didn’t know how the viewers would take it. I started the show in my 30s, and I’m in my 50s now.

‘It’s just been such a huge part of mine and my family’s lives. For the last 18 years, from September until Christmas, we get swept along on the Strictly juggernaut.

‘Sometimes I have to stop and take stock and think how incredible it is to be part of a show that has been part of the nation’s consciousness for almost two decades.

‘How lucky am I, I never take that for granted, and I’m always so grateful to be a part of something that genuinely feels so special.’ 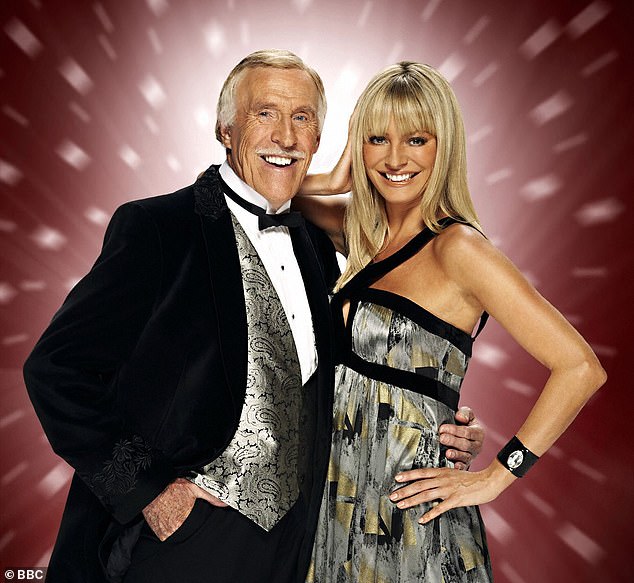 Late great Bruce: Tess Daly recounted feeling intimidated by working with Sir Bruce Forsyth and remembered it being a ‘pinch me’ moment’