Life on the road: Young girls smoke cigarettes while others get glammed-up in striking images of Irish traveller children for new book about the prejudices they face

These stunning black-and-white photographs offer a unique glimpse into the lives of traveller children in Ireland.

American photographer Jamie Johnson has been traveling around the world for twenty years and is best known for her portraits of children.

Johnson has released a new book, entitled ‘Growing Up Travelling: The Inside World of Irish Traveller Children’, which shows girls no older than eight smoking cigarettes and holding designer bags, a boy holding his fist in a fighting pose, and young girls wearing make-up and glamorous clothes.

When she came to Ireland for the first time in 2014, she immediately felt connected to the Irish Traveller community and would visit and photograph them time and again for five years.

Three young traveller girls, no older than eight years old, sit outside a barber shop in Ireland, two of them wearing flashy rings, one smoking a cigarette and another holding on to Louis Vuitton bag 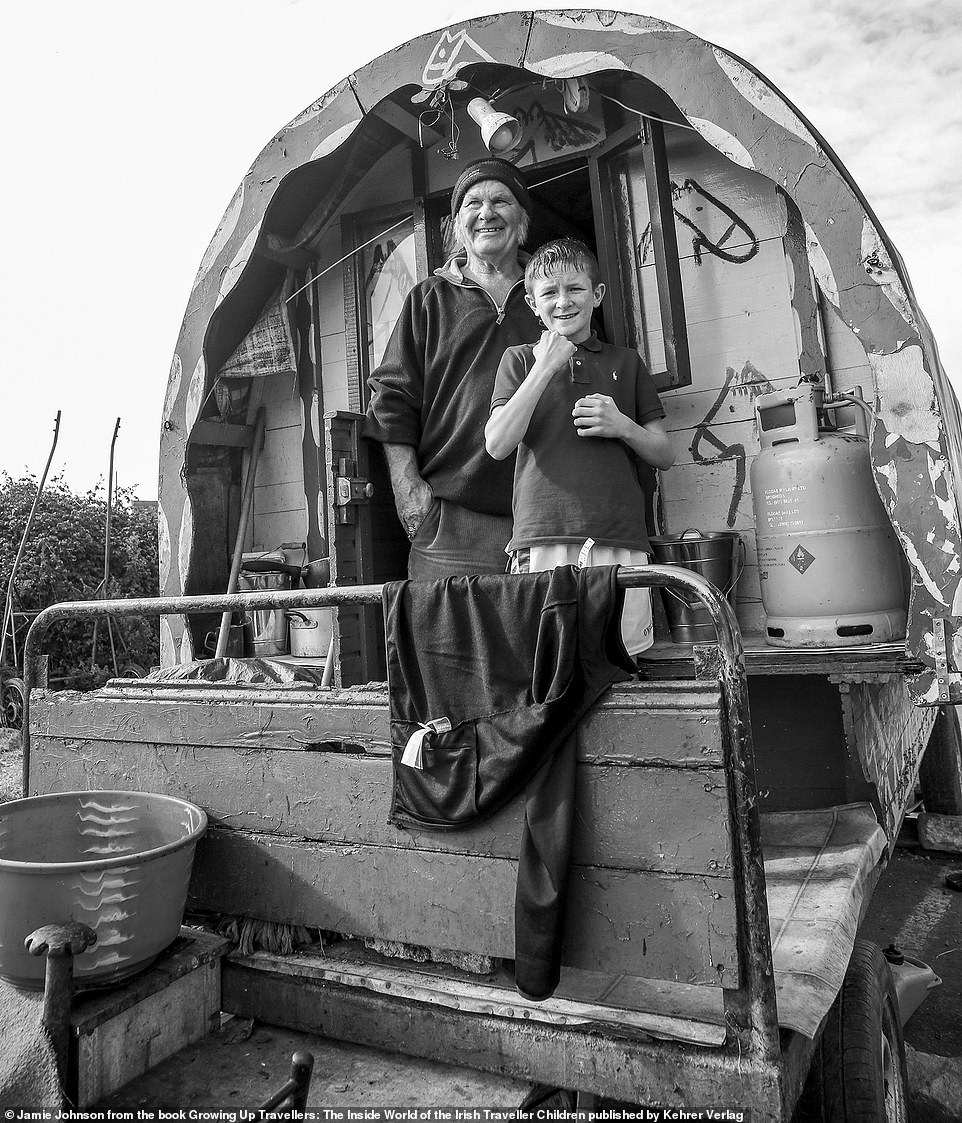 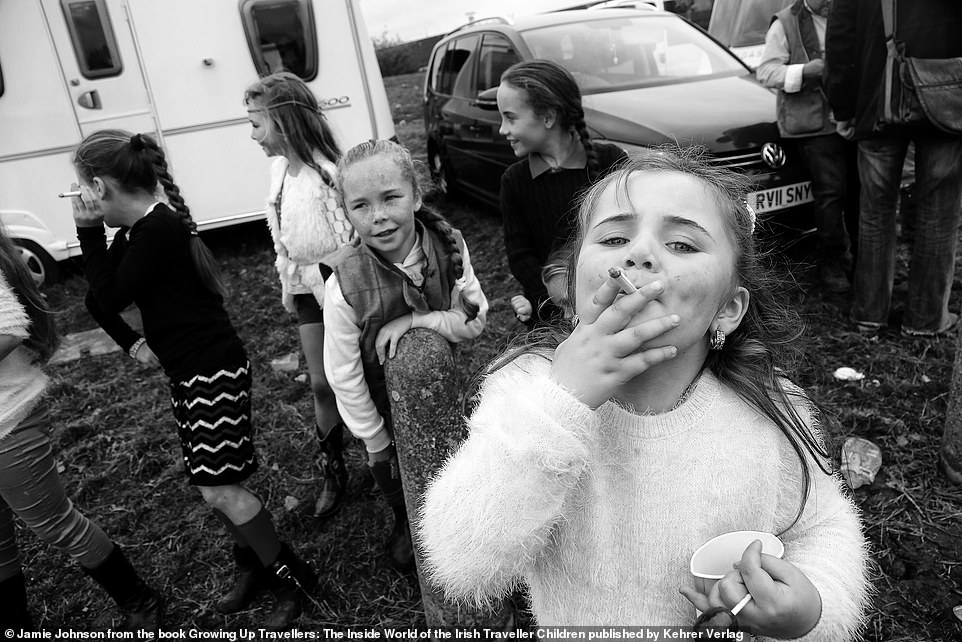 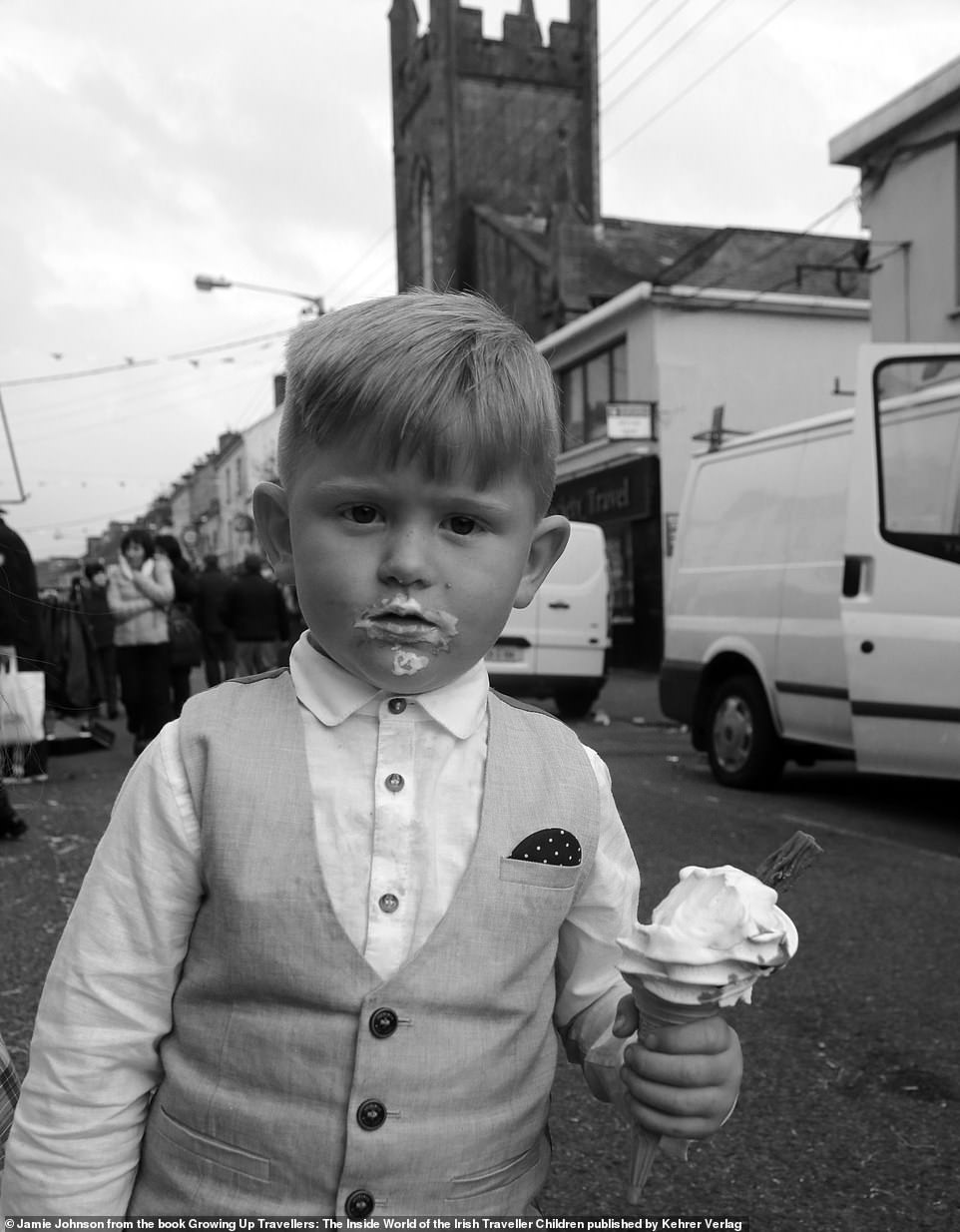 A young lad stands with a mouth covered with ice cream in this photograph captured by US-based photographer Jamie Johnson, who spent five years getting to know an Irish traveller community

In a previous interview with Mail Online, Johnson said that after living alongside the traveller community she came away with the impression of a ‘very proud’ group of people, who are strong in their faith and their commitment to family.

There are an estimated 25,000 travellers in Ireland, who have a history in culture dating back to pre-Celtic times.

Many of the pictures were taken at the Ballinasloe Horse Fair and Festival, which attracts travellers from all over Ireland and Europe to trade puppies and horses. 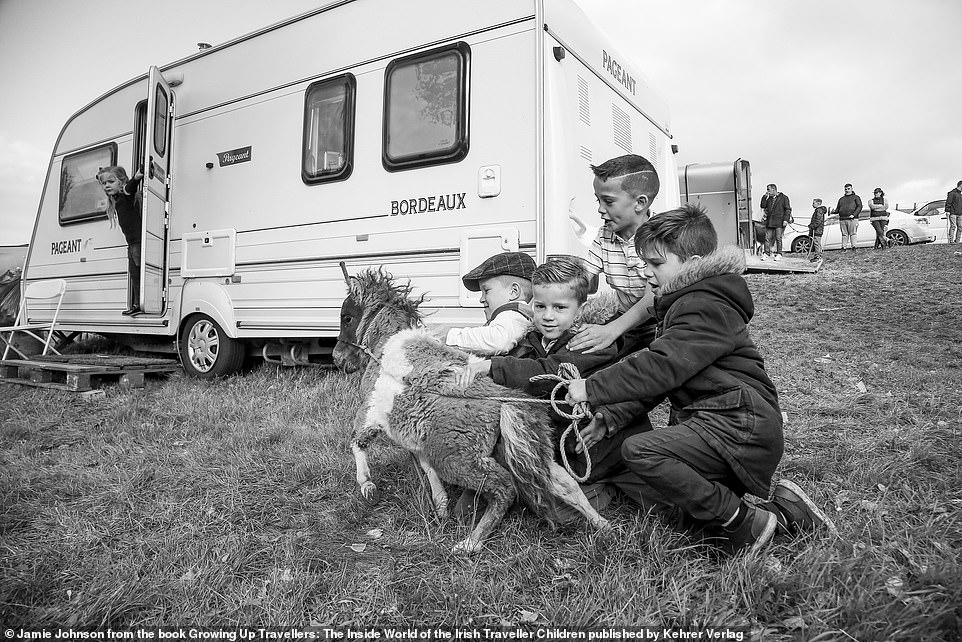 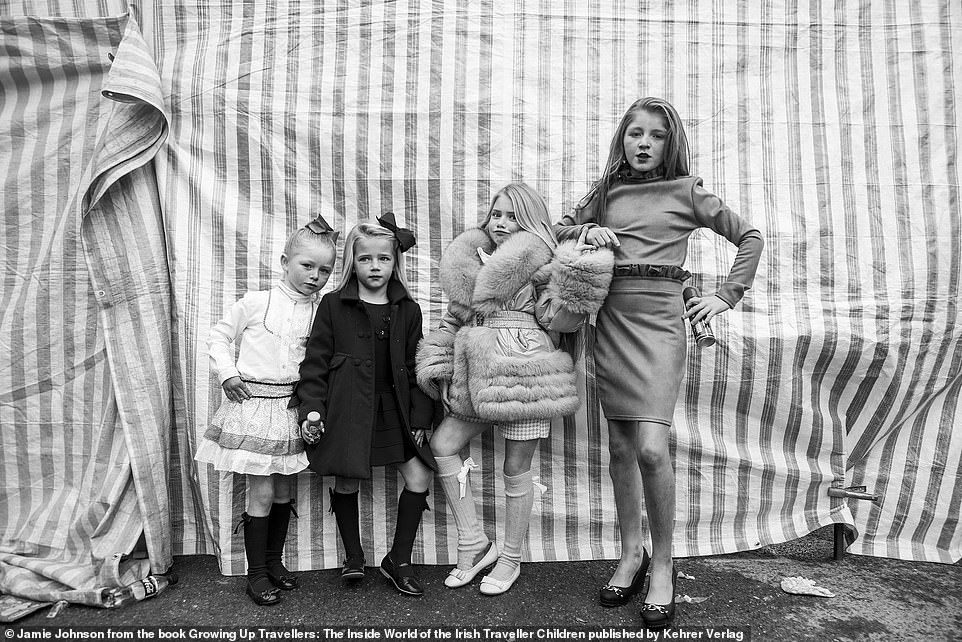 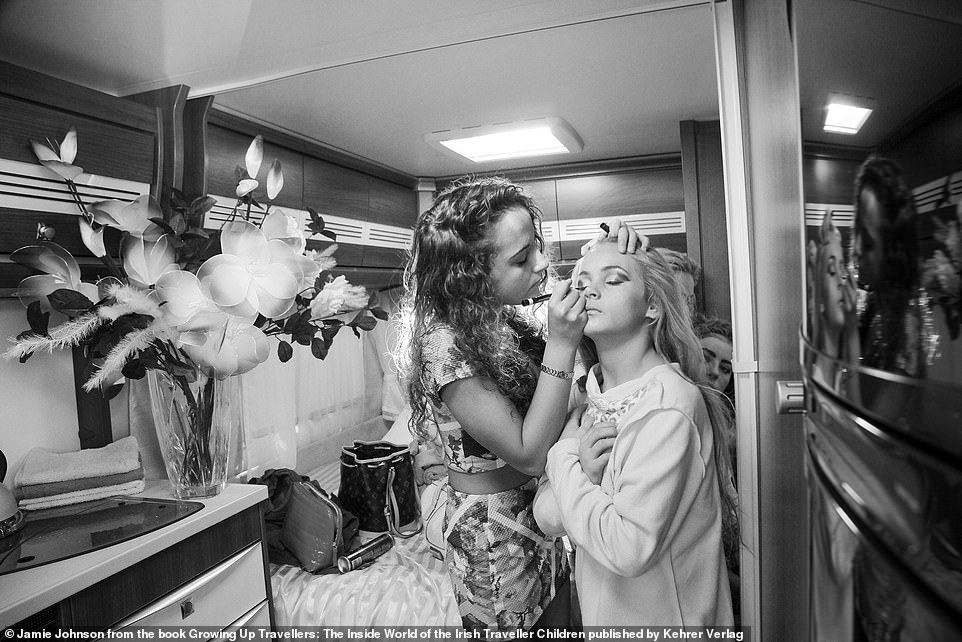 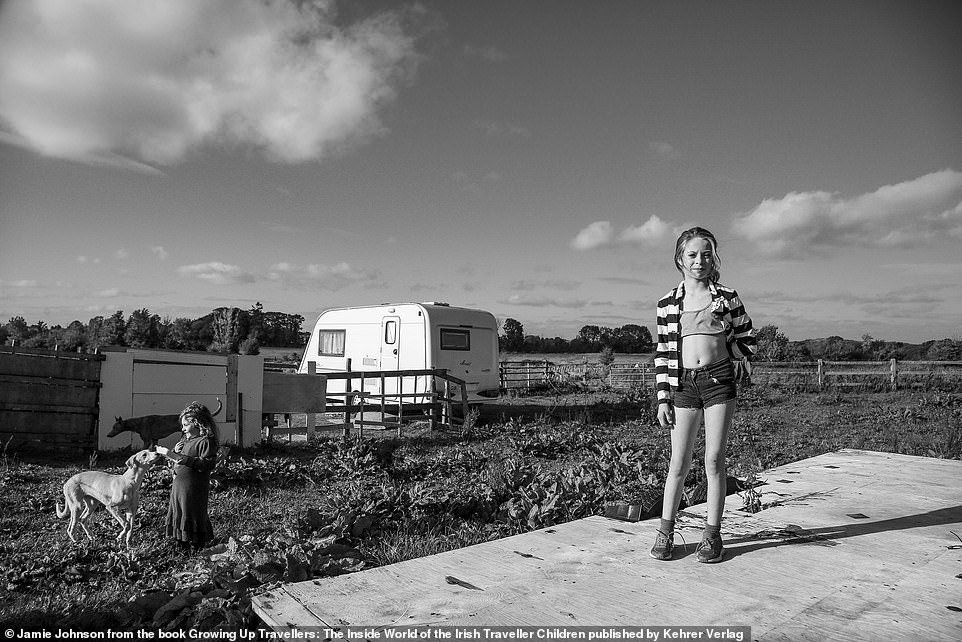 A young girl poses for a photograph as another feeds a greyhound in this image taken by US-based photographer Jamie Johnson, who gained the trust of an Irish traveller community

Jamie told Mail Online: ‘They hope to find good husbands for their daughters in their community to carry on travellers traditions.

The photographer spent time getting to know the families, at first gaining their trust with ‘a few introductions and lots of smiling’. 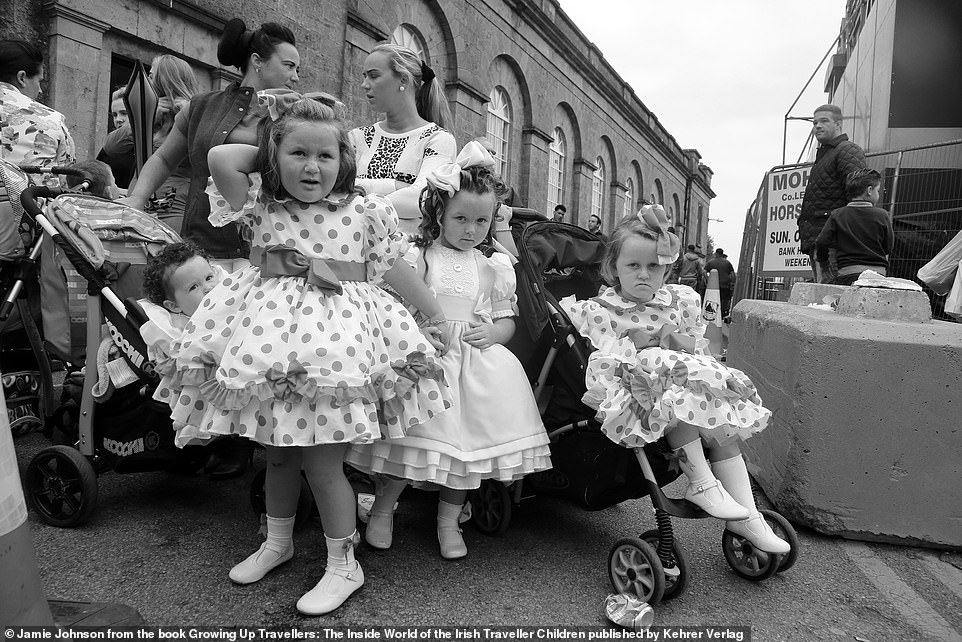 Four traveller toddlers look suspiciously at the camera as their mothers chat in the background in this photograph by US photographer Jamie Johnson, who spent five years following the community in Ireland 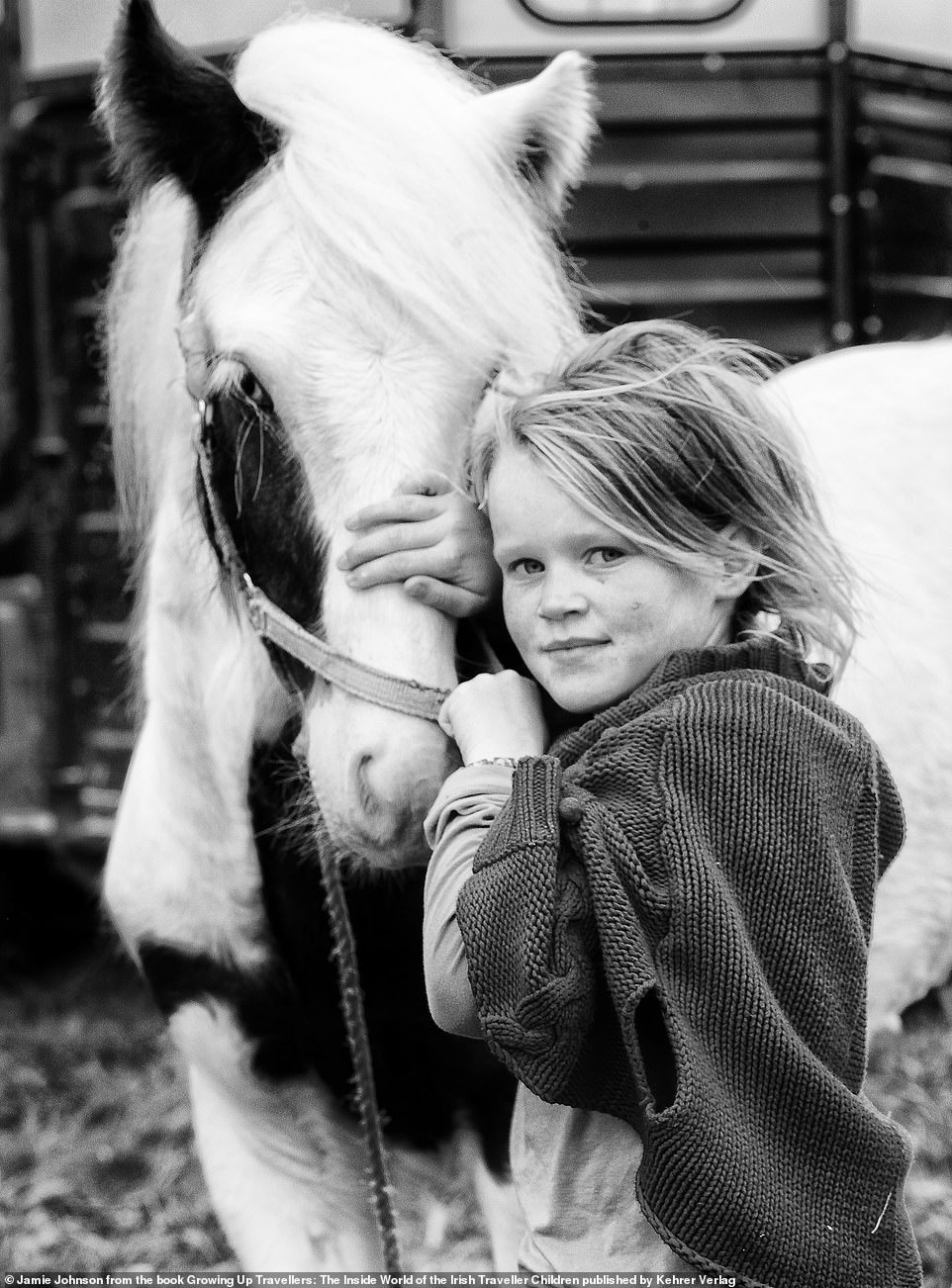 A young traveller girl pets a horse in this photograph taken by US photographer Jamie Johnson. Horse ownership is considered one of the last links to the community’s nomadic way of life 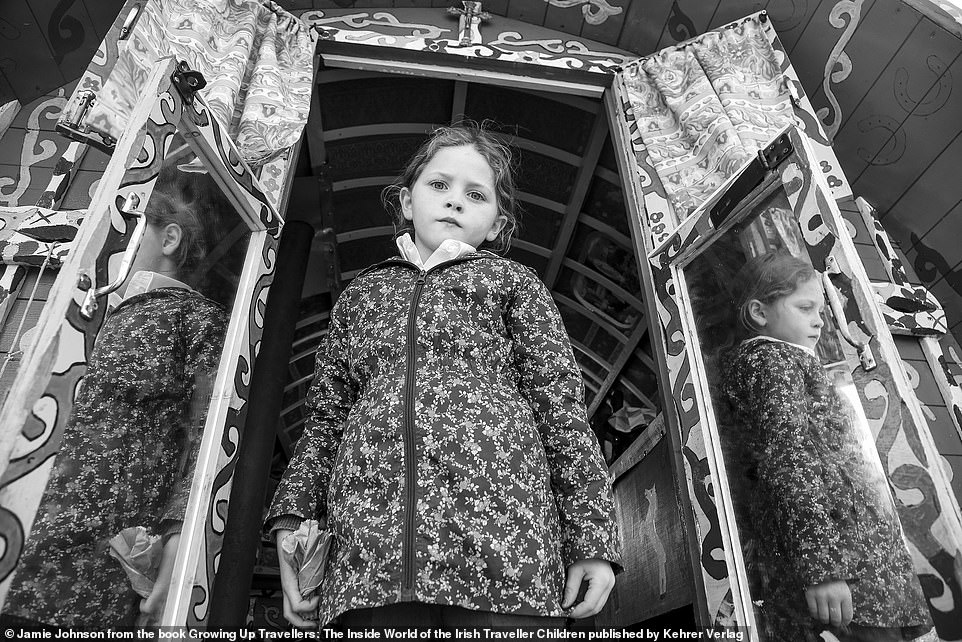 A young traveller girl stands at the back of a caravan in this picture by US-based photographer Jamie Johnson, who spent time getting to know a group of Irish travellers over the course of five years 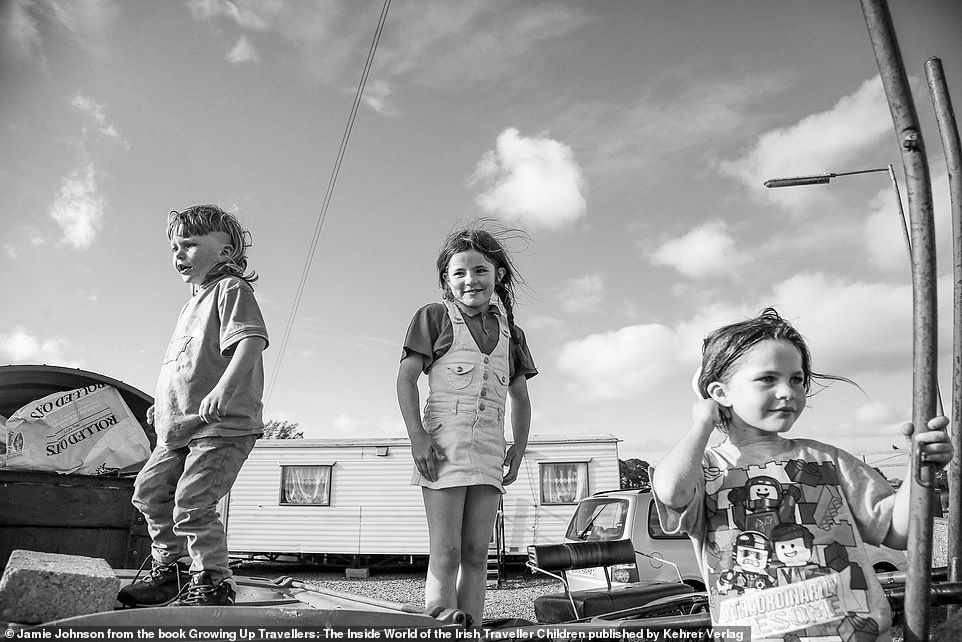 She spent some time shopping with the women and playing with the children – even letting them try out her fancy cameras.

‘The community works to carry on their family culture and traditions through many generations by telling all the wonderful stories of their grandparents’ and great-grandparents’ travels,’ she said.

‘They seek equality and hope to rid of for the next generation of the extreme prejudice that has faced theirs.’