Chloe Madeley has slammed the hashtag ‘StrongNotSkinny’ in an impassioned message posted to her Instagram account on Tuesday.

The fitness enthusiast, 32, shared a throwback image of herself and her husband, I’m A Celebrity… Get Me Out Of Here! star James Haskell, 34, on holiday in Ibiza in July 2016, while declaring: ‘This hashtag needs to die.’

Chloe insisted that while genetics are real and play a part in one’s body transformation journey, they’re not an excuse, and claimed society is ‘going backwards’ by following the trend.

‘It needs to die’: Chloe Madeley shared a snap of herself with husband James Haskell from July 2016 as she slammed #StrongNotSkinny’ in an impassioned Instagram post on Tuesday

Alongside an image of the media personality reaching out to her partner James, 34, for a hug, the personal trainer kicked off her post: ‘#StrongNotSkinny? Why this hashtag needs to die….’

‘The understanding that increased muscle mass is physically GREAT for both men AND women… The idea that women need to STOP thinking we all need to LOOK the same..’. [sic]

After highlighting the increased knowledge about men and female training, Chloe questioned her followers: ‘So why are we simultaneously going backwards on our way forwards?’ 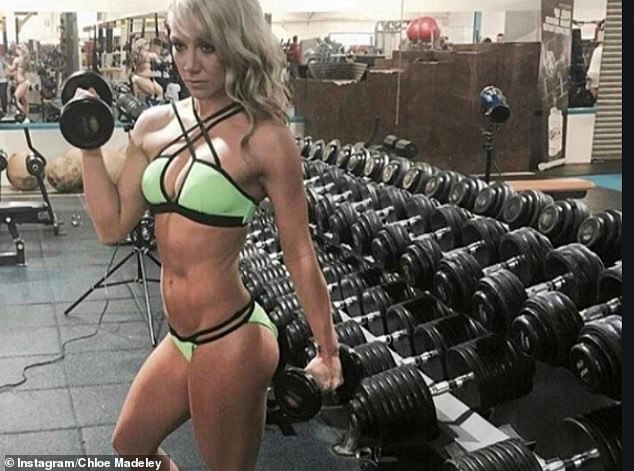 ‘Genetics are not an excuse’: The fitness enthusiast (pictured in March 2016), 32, declared the hashtag ‘needs to die’ 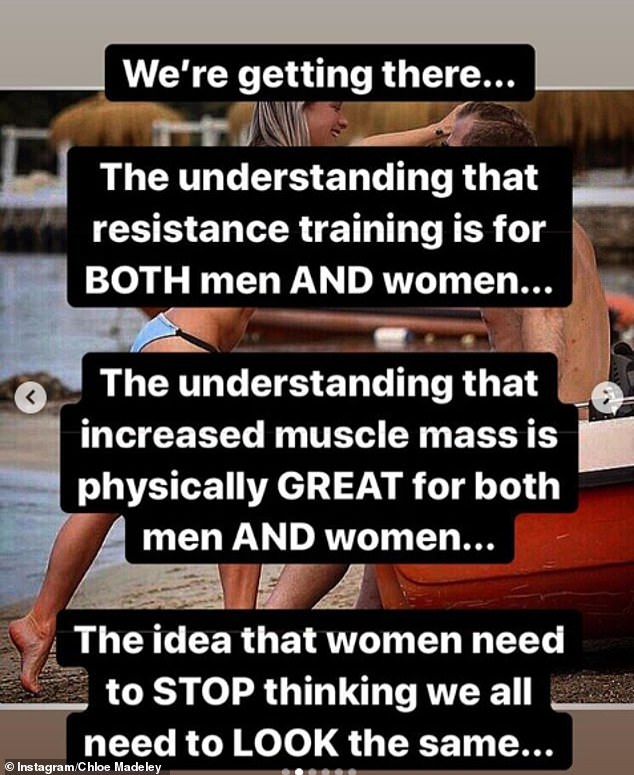 ‘We’re getting there’: The daughter of TV presenters Richard Madeley and Judy Finnigan highlighted the increased knowledge about men and female training

The model didn’t hold back in sharing her thoughts on the hashtag as she elaborated: ‘I know ”skinny” girls, and believe it or not, many of them are also ”strong”.

‘I know girls who are shlogging away in the gym TRYING to gain muscle, and coming up against their own genetic hurdles…

‘”Skinny” girls who follow the same fitness accounts we all do, seeing the “strong not skinny” line over and over again, feeling frustrated and like they ain’t represtin the cause.’ [sic]

The media personality went on to encourage her fellow social media followers: ‘Guys, newsflash… GENETICS ARE REAL… No, they’re NOT an excuse, EVERYONE can change their body regardless of their genetic makeup… 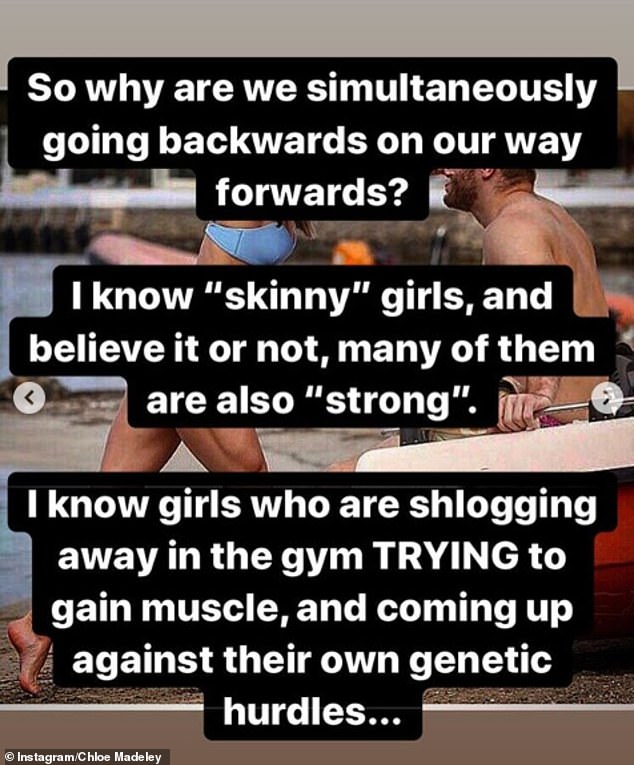 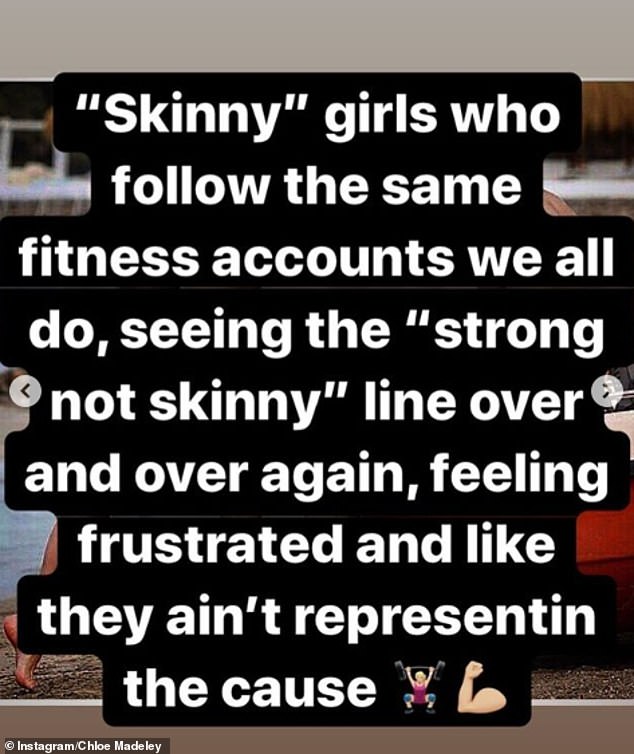 ‘Can we all stop using this bull**** hashtag now please?’ TV presenter Chloe insisted that while genetics are not an excuse, and claimed society is ‘going backwards’ by following the trend

‘But they WILL make your ”journey” harder, easier, longer or shorter. If you’re into health and fitness, lifting and muscle, don’t feel bad if you don’t quite LOOK the part yet, on EITHER side of the spectrum…

‘Enjoy the journey, enjoy the learning, enjoy the training, and BACK YOURSELF’, the Jump 2015 contestant ended her post.

Last week, Chloe penned an impassioned defence of female weight training and said criticising the method is the same as calling someone ‘fat’. 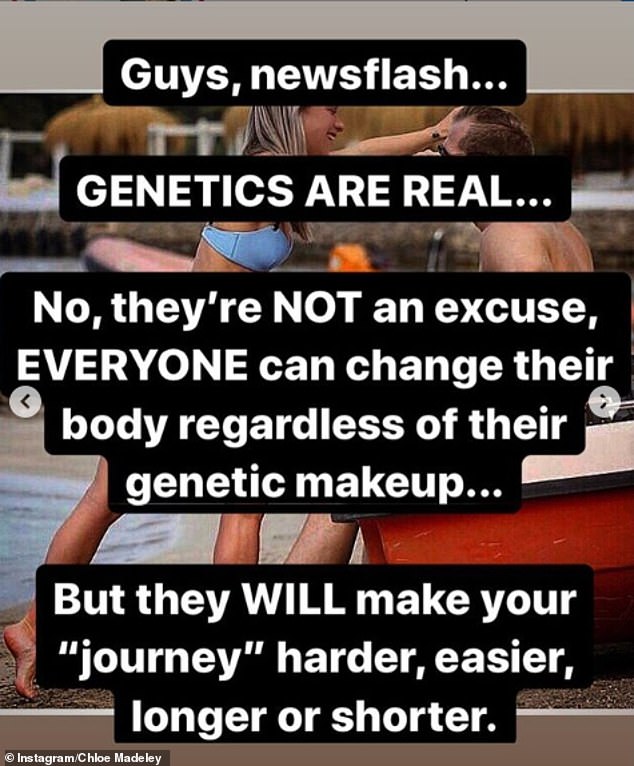 Beginning her speech, Chloe said: ‘I still find it utterly BIZARRE when i see / hear debate in the mainstream media about whether or not women ‘should’ have muscle…’But it looks AWFUL!’…excuse me woman?!’

‘Let me just break that down for you from my perspective… Let’s start having items and opinion pieces on whether or not women ‘should’ run marathons…? It looks awful guys.’

Chloe then included a list of other things that would be ridiculous to debate including whether women should be journalists, authors, have personal trainers or wear duffel coats.

She continued: ‘Honestly, I have FEMALE producers calling me asking me on to debate this ‘topic’…WHAT CENTURY ARE WE LIVING IN?’ 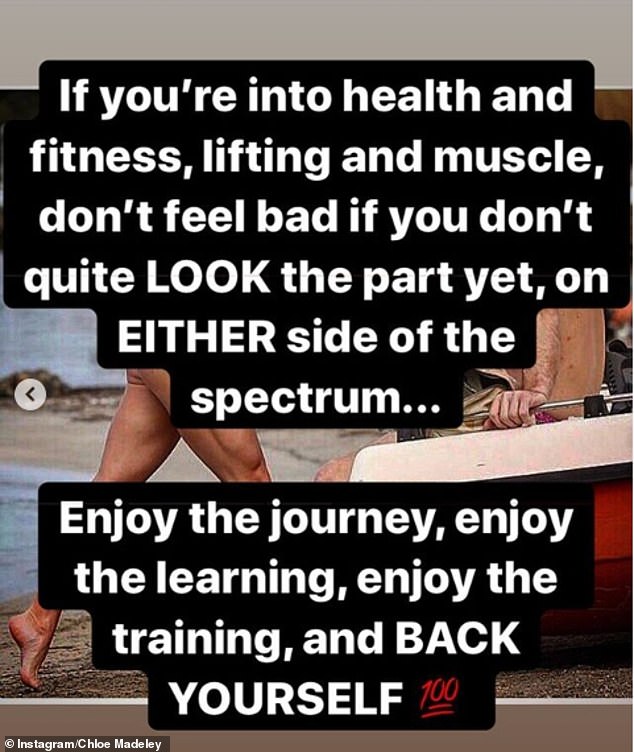 ‘Don’t feel bad if you don’t look the part’: The media personality went on to encourage her fellow social media followers

The TV personality added that she believes the apparent debate over female muscle suggests that all women have to conform to one body type.

She said: ‘This is just so AMAZINGLY sexist and sends COMPLETELY the wrong message to all the women and girls who think they need to conform to ONE body type, ONE look, ONE physical image…that’s GENETICALLY impossible as it is so WHY are we trying to force every woman into the same pen?!’

‘ALSO, and more importantly, WEIGHT LIFTING IS ONE OF THE BEST THINGS YOU CAN DO FOR YOUR BODY! But it LOOKS bad right so women should miss out on that too?! 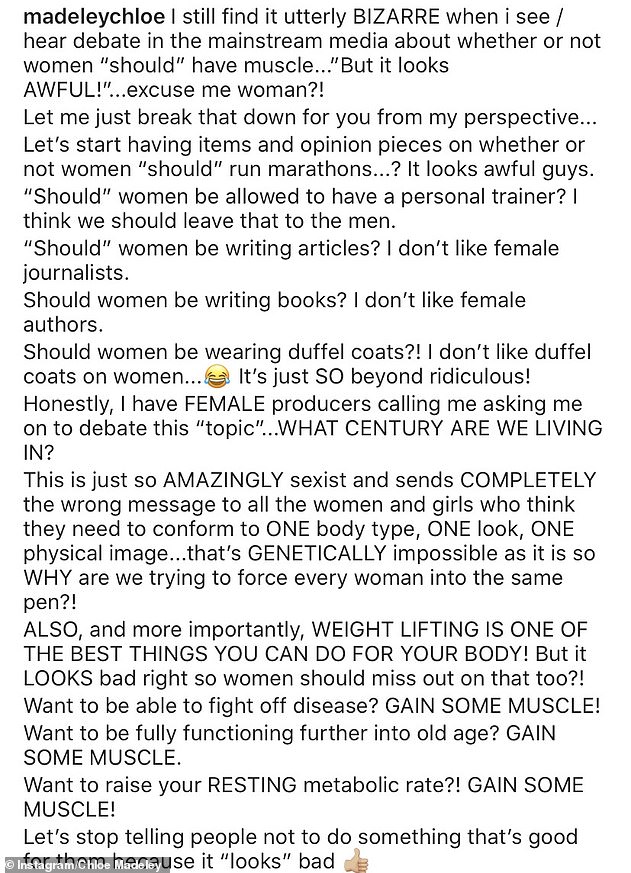 ‘Bizarre’: The fitness guru, 32, claimed that she finds it ‘bizarre’ that their is still an ongoing discussion over whether or not women should have muscles

Chloe’s partner James – who she tied the knot to last December – is taking part in this year’s I’m a Celebrity… Get Me Out Of Here! in Australia.

The sportsman cheekily revealed he’ll ‘throw himself in the creek’ to cope with missing sex with his wife.

Chloe, the daughter of TV’s Richard Madeley and Judy Finnigan, previously revealed that the couple have sex ‘sex every night’.

When asked how he’ll cope without getting hot and heavy for up to three weeks, the sporting ace told The Sun: ‘I think I’ll be able to stay calm.

‘When you’re on 700 calories and everything smells of smoke, I’ll be fine. I’ll just throw myself in the creek.’ 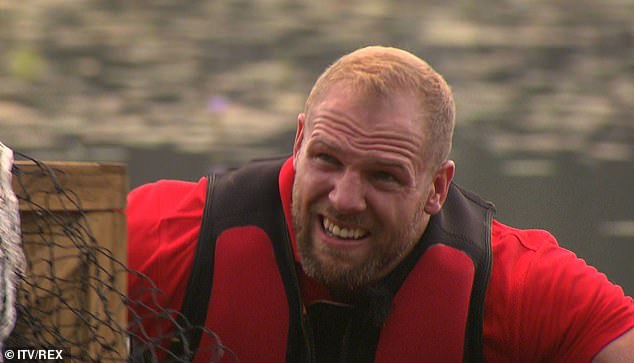 Roughing it: Meanwhile, her partner James – who she tied the knot to last December – is taking part in this year’s I’m a Celebrity … Get Me Out Of Here! in Australia (pictured on Sunday) 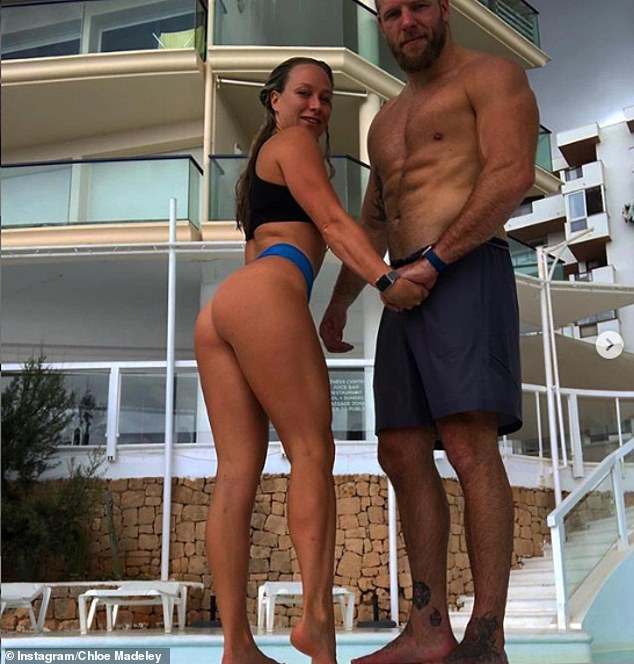 ‘I think I’ll be able to stay calm’: The sportsman, 34, cheekily revealed he’ll ‘throw himself in the creek’ to cope with missing sex with his wife (pictured together in August)