Asking someone out requires a lot of bravery and charm – but according to one college student, the real secret to a successful date proposal is actually a masterful grasp of the English language and all its persuasive powers.

To prove his theory, the young man – known only as Jake – enlisted the help of his English professor in order to craft the perfect text message to ask out a crush, using persuasion theory to create an irresistible offer.

Using a basic understanding of ethos, pathos, and logos, otherwise known as the modes of persuasion, the duo penned a succinct, yet incredibly effective, date night proposal which they knew Jake’s crush Hannah would be powerless to refuse. And they were right.

Who knew? Twitter user Jake wanted to ask his friend Hannah out, but didn’t know how so he consulted his English professor who helped him use the academic modes of persuasion 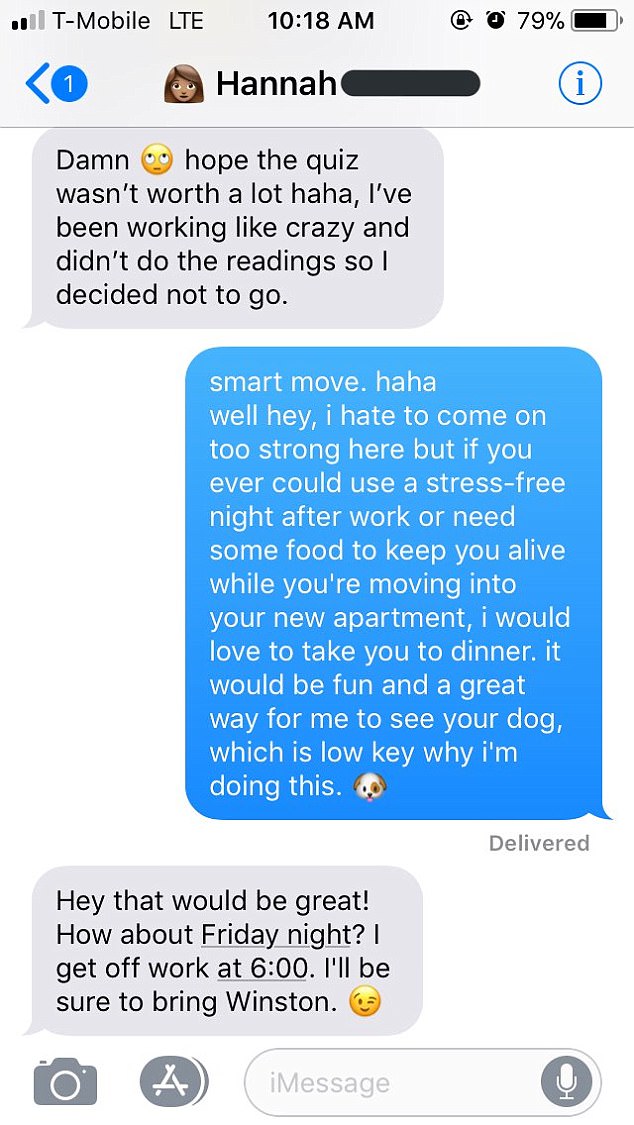 Works like a charm! He crafted his text delivering the bare bone ethos, pathos, and logos argument, and to his surprise it worked and she suggested a Friday night date 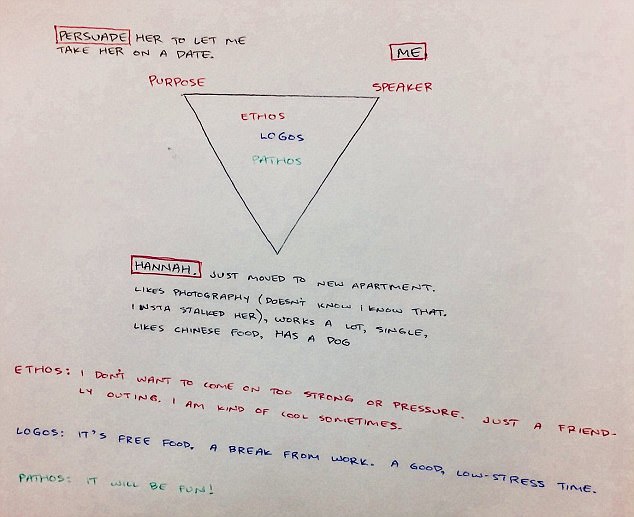 Map it out! Jake and his teacher even created a triangle diagram with the date, Jake, and Hannah as the three vertices and they constructed three academic-based arguments

Jake’s invite to dinner centered on the three main points of persuasion:

Thrilled that his incredibly persuasive offer had gone down so well, Jake immediately took to Twitter to share his success story, revealing the actual text message that came out of his discussion with his professor.

‘Yooo I have about zero skills when it comes to texting girls so I legit asked my English professor to help me draft a text to a girl and we STRAIGHT ETHOS, LOGOS, PATHOSED MY WAY INTO A DATE [sic]’ Jake captioned his viral tweet.

‘Hey, I hate to come on too strong here but if you could use a stress-free night after work or need some food to keep you alive while you’re moving into your new apartment, I would love to take you to dinner,’ Jake’s text to Hannah read.

‘It would be fun and a great way for me to see your dog, which is low key why I’m doing this.’

Alongside the words, and a grab of his triumphant text conversation with Hannah, Jake also shared the triangle graph he made with his professor that analyzed his predicament and created three conversation points, stemming from the English rhetorical modes of persuasion. 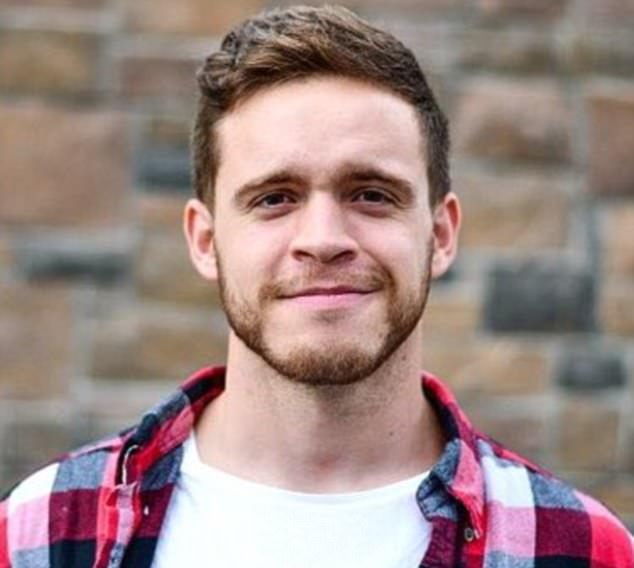 Knows his stuff! Jake (above) was shocked his theoretical flirting approach worked and unintentionally inspired thousands of Twitter users to try the tactic out for themselves

Slick rick! Jake’s post went Twitter viral with many applauding his hilarious use of school theory, amassing over 74,000 retweets and more than 316,000 likes 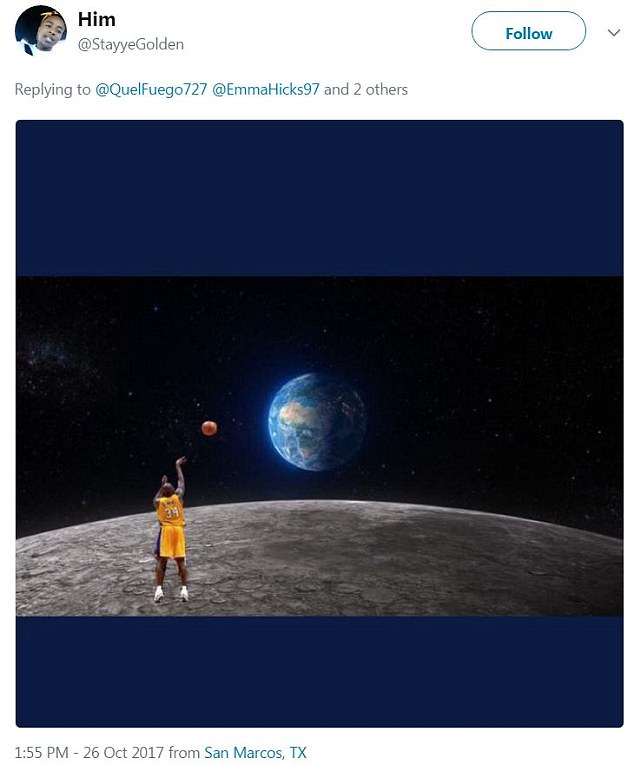 Shoot your shot! Many users admired Jake’s boldness and going for the date, even if it was an odd text, but it proved to work out perfectly 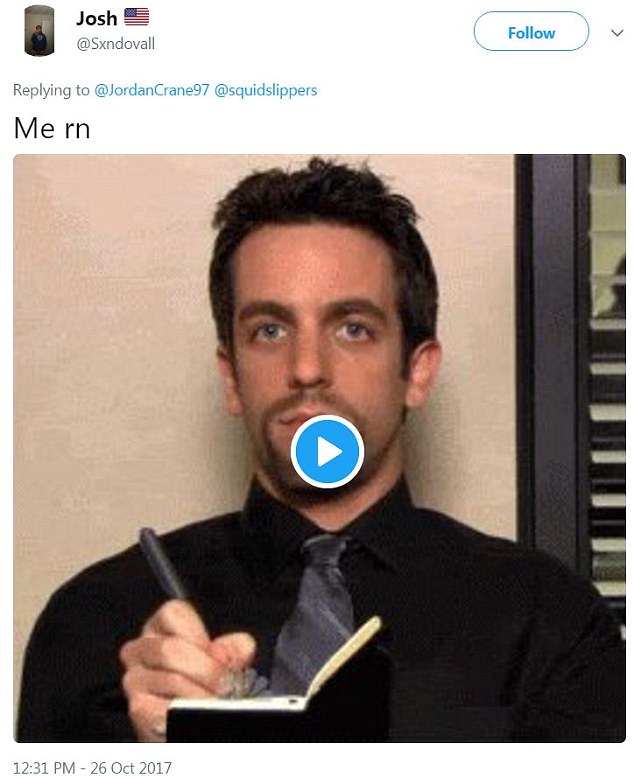 Taking notes! Many male users shared they were avidly taking notes on Jake’s tactics, willing to try it out for themselves to win some dates using the English theories

Keep us updated! Twitter fans were invested in Jake’s relationship with Hannah, and demanded constant updates on their romantic future together

Listen up, boys! One user told guys to give his lesson a keen eye, saying that men’s typical approaches to women are far too curt and careless, compared to Jake’s thoughtful message

Twitter users cracked up with the message that reminded students of their dormant high school and college English lessons, that they hardly exercised outside of academic environments, but proved wildly successful for Jake. His tweet racked up over 74,000 retweets and over 316,000 likes.

The screenshot of their text conversation reveals that Hannah missed a quiz because she was tired from working and neglected to do her readings. Jake then saw his chance to shoot his shot, and sent his perfectly-worded message.

And Hannah’s response was surprisingly positive, sending Twitter into cheers of hooray.

‘Hey that would be great! How about Friday night? I get off work at 6:00. I’ll be sure to bring Winston,’ she replied, even adding a cheeky winking face.

Attached to the conversation was a persuasion graph that displayed Jake’s three main argument lines. His ethos reason was he didn’t want to be too pressing and would offer a stress-free friendly environment, logos was the hang out would provide a free meal, and pathos was the friend date would be fun and maybe even lead to more.

He even drew a triangle diagram with the three points being his purpose, himself the speaker, and Hannah, his objective.

His message used each argument in its simplest form, with no frilly language or pizzazz added.

And Twitter users couldn’t help but applaud Jake for his slick moves.

Teacher’s joy: One man shared that his old English teacher would be overjoyed to hear students practically applying the old theories

AP skills! Audrey remembered the terminology thanks to her high school AP courses which taught the persuasion theories, and hoped it could benefit her in similar ways

Straight A’s! Luke was left in stitches of laughter and reminded to avoid fallacies in his spotless persuasion argument, just as English language lessons taught

Welp! The post made some students sad comparing their lazy and careless English teachers

Dream man! One Twitter user thought Jake was a diamond in the rough because he felt reflective enough to ask for help from a trusted, mature adult

‘That’s some smooth s*** there my guy that text is slick as f***,’ user Jordan applauded.

The message touched several girls as well, with one user requesting Jake hit her up if things with Hannah fall through, utilizing the same modes of persuasion but to a lesser degree.

‘Hit me up if it doesn’t work out but not in a creepy way ya feel like I don’t know I love you,’ Twitter user Melody wrote.

The attentive message had others encouraging other guys to follow suit with more thoughtful messages when pursuing dates.

‘More women would say yes to you guys if you put the effort into it, but mots of y’all just say what you doing,’ Sergio wrote.

Most Twitter users, however, shared a good laugh with the use of old vocabulary words and academic theory.

‘Yes those AP Language skills could come in handy for me,’ one twitter user Audrey wrote.

And others were touched by the English professors dedicated to helping a student, even in the love department.

‘My English professor hasn’t even graded the paper we turned in a month ago,’ one user lamented, comparing his teacher to the Jake’s role model mentor.

Another found Jake charming for acknowledging his need for help.

‘Asking the English professor for help shows this guy has skills many lack: self-assessment and selection of appropriate advisers,’  a Twitter fan added.

It remains unclear if Jake and Hannah went on their fateful date, but when they do they’ll have plenty of Twitter users to update on their relationship and on the success of the schoolbook modes of persuasion.