A Stoneman Douglas student made an impassioned plea for policy makers to put politics aside to take action to prevent another mass shooting after 17 of his classmates were shot dead in a brutal high school shooting yesterday.

Senior David Hogg, 18, was in his AP Environmental Science class when he heard a gunshot ring out at around 2.30pm.

Hogg, the news director of the student TV station, said he initially suspected it could be a drill, so when the fir alarm rang he and his classmates dutifully filed out. That’s when he saw a ‘flood’ of kids running in the opposite direction.

‘So I started running with the herd and we’re running we’re actually running toads the freshman building,’ he told CNN. ‘And thank god a janitor stopped us.’

David Hogg (pictured with classmate Kelsey Friend) has urged police makers to take action in an inspirational interview outside his school, Stoneman Douglas, less than 24 hours after a gunman murdered 17 of his classmates

Hogg credits the school janitor with saving his, any many other kids’, lives that day.

They had stopped them from running and funneled him and around 40 other kids into a nearly culinary cooking classroom.

‘Because of those heroic actions, in 30 seconds she saved my life and easily 40 others there,’ he said. ‘In a matter of 30 seconds we were in the re locked down and away. Because if her heroic actions I’m pretty sure that’s why I’m alive today.’

Hogg said he and his friends only realized what was happening when they checked their phones, safely inside the classroom.

‘We actually thought it was a drill at first,’ he explained. ‘When I was in there we learned it was anything but a drill. This was life or death.’

The teen said that during the ordeal, he’d been ‘extremely concerned’ for his sister, a freshman at the school. The gunman, named as Nicolas Cruz, had targeted the freshman building during his two hour rampage yesterday. 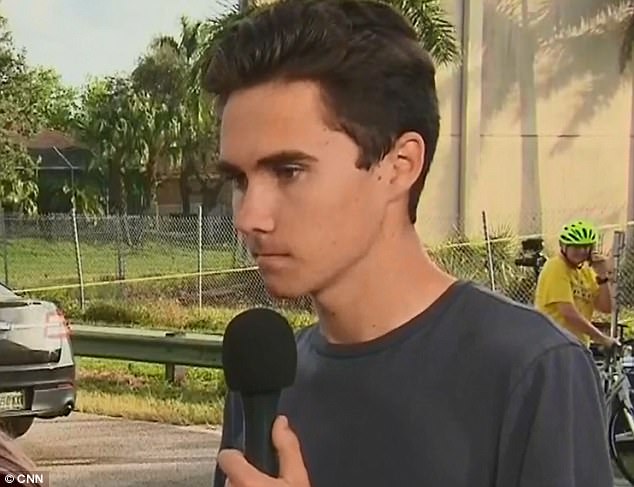 Senior David Hogg, 18, was in his AP Environmental Science class when he heard a gunshot ring out at around 2.30pm

His sister survived the attack but sadly, lost two of her best friends in the fatal shooting.

‘That’s not acceptable,’ the very articulate 18-year-old said. ‘That’s not something that should happen in this country, especially when we’re going to school. It’s something that we really need to take a look at.

‘Our policy makers and some people need to look in the mirror, and take some action. Because ideas are great, but without action, ideas stay idea and children die,’ he added.

‘We’re children, you guys are the adults, you need to take some action, and play a role, work together, come over your politics, and get something done.’

He urged lawmakers, members of Congress and the president to put aside their political differences and work together to stop another school shooting from happening ever again.

‘Please take action, ideas are great that are wonderful and help you get re-elected. We can say we’re going to do all these things; thought and prayers.

‘Any action at this point, instead of complete stagnancy and blaming the other side of the political aisle, would be a step in the right direction. Working together to save these people’s lives is what this country needs.’ Hogg credits the school janitor with saving his, any many other kids’, lives that day

‘That’s unacceptable,’ Hogg insisted. ‘The fact that this is the 18th shooting and its only February is a testament to where this country has come and how far we need to dig out of this hole.

‘We need to realize something is seriously wrong here.’

The high schooler wants ordinary people to take a stand against gun violence, by contacting their congressman, joining activist groups, or do anything they can to prevent another tragedy.

‘Don’t stop fighting because children will continue to die if we don’t take a stand now,’ he urged.

And for Hogg? He plans to take his own quiet, personal stand by continuing with his education at his high school – and refusing to be scared by the ordeal.

‘I’m not going to let this person stop me, that’s what they want to do, they want to scare us. They want to make us feel unsafe, and I say no.

‘I’m going to continue learning so I can prevent this from happening again.’