A student shot three times in the Florida mass shooting broke down in tears as she was reunited with the equally emotional first responder who saved her life.

Maddy Wilford, 17, was hit in the chest, abdomen and arm when gunman Nikolas Cruz, 19, opened fire at Marjory Stoneman Douglas High School in Parkland, on February 14.

The teen was found inside the school building, bleeding heavily, and was rushed to waiting ambulances outside. 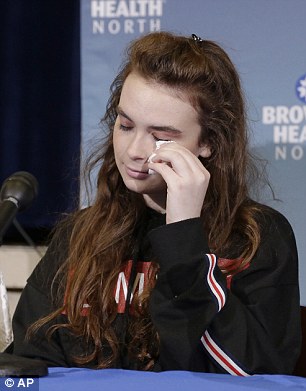 Maddy Wilford (right) had an emotional reunion as she was reunited with the first responder that saved her, Lt. Laz Ojeda (left)

Lt. Laz Ojeda, of Coral Springs Fire Department, said he’d received orders to take her to a hospital 30 miles away but made what doctors referred to as a ‘life-saving’ split-second decision to take her to Broward Health North hospital, less than 10 miles away.

‘I’m so grateful to be here & it wouldn’t be possible without the officers & 1st responders & amazing doctors,’ Maddy said, dabbing away at her tears at the press conference on Monday, according to CBS News.

‘Especially all the love that everyone has sent. I wouldn’t be here without it. I just want to send my appreciation and love out to all of you.

‘I just love the fact we’re sticking together.’ 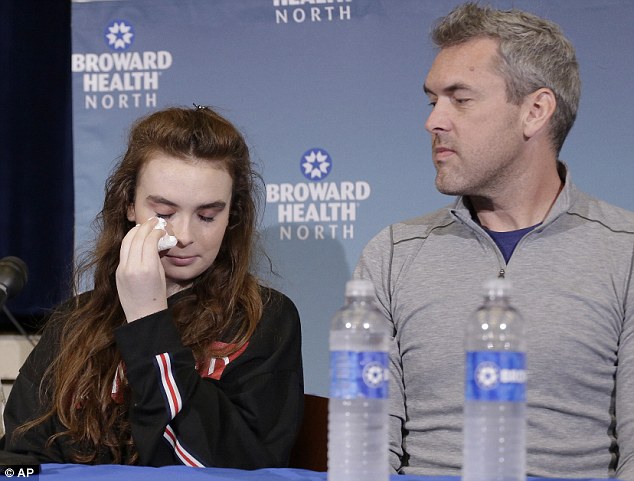 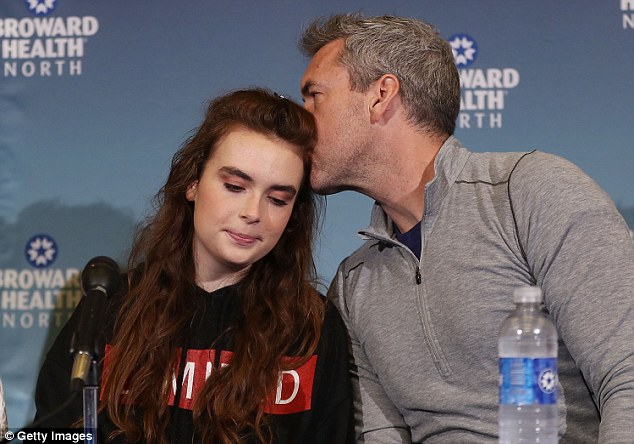 David Wilford, Maddy’s father, also struggled to overcome his emotions as he thanked the cops and first responders for saving his daughter’s life (pictured kissing the top of her head)

David Wilford, Maddy’s father, also struggled to overcome his emotions as he thanked the cops and first responders for saving his daughter’s life.

‘I am very grateful to be sitting here next to my daughter, alive and well today. There are a lot of people to thank for Maddy’s life,’ he said.

Ojeda got choked up as he described the moment that he was treating Maddy in the back of the rescue vehicle.

He said that she was in shock and had serious injuries. He was able to keep her conscious and made the snap decision to redirect them to a closer hospital.

‘I got into this job to help people. I guess when you are able to see it [help], it makes it that much better,’ Ojeda said. 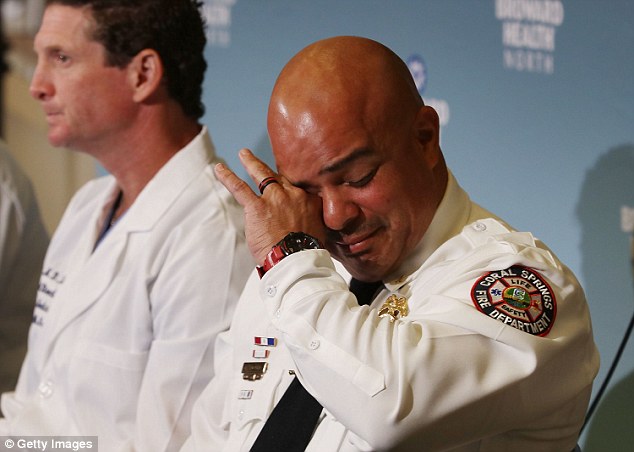 Lt. Laz Ojeda, (pictured wiping away a tear) of Coral Springs Fire Department, said he’d received orders to take her to a hospital 30 miles away but made what doctors referred to as a ‘life-saving’ split-second decision 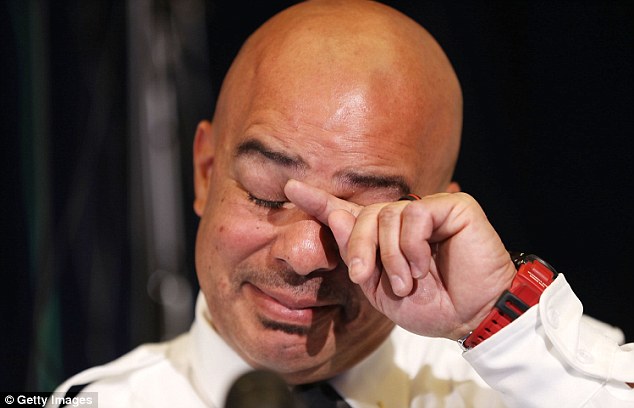 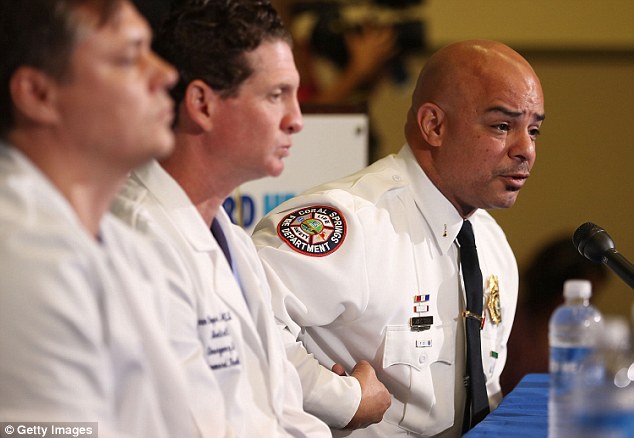 He said that she was in shock and had serious injuries they were treating. He was able to keep her conscious and made the snap decision to redirect them to a closer hospital 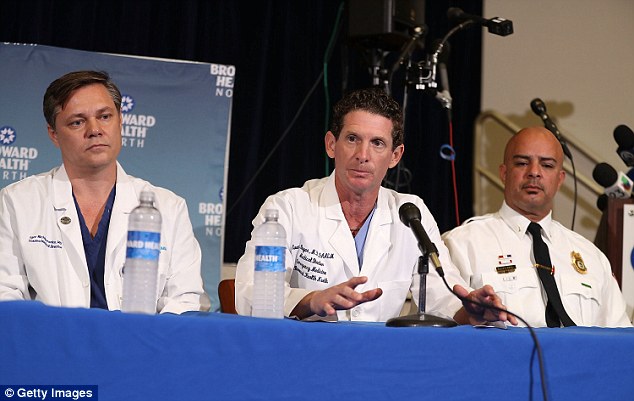 The teen underwent three surgeries but has recovered very quickly although some bullet fragments remain inside her.

Her mother, Missy Wilford, put her daughter’s speedy recovery down to her inner strength.

‘She knows who she is. She knows where she wants to go and what she wants in life. That strength & power helps you heal,’ she said.

Students at the school have remained vocal in pushing for gun control in the wake of the shooting that left 17 dead and 15 injured. 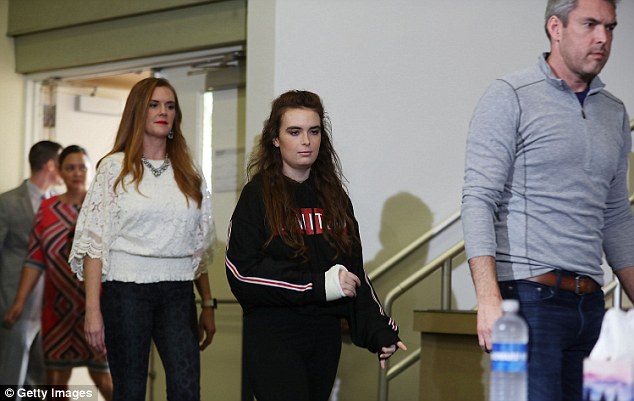 Her mother, Missy Wilford, (left, with her daughter, center, an husband, right) put her daughter’s speedy recovery down to her inner strength 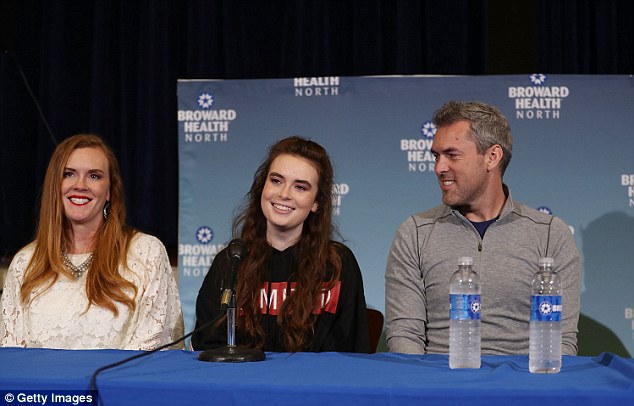 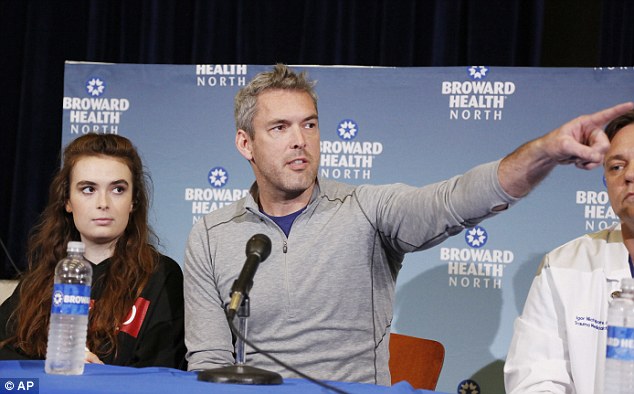 They organised a march in Parkland in the days after the attack, and are planning a national march on Washington DC next month.

The movement seems to be gaining traction after President Donald Trump pledged that his administration would take unilateral action to ban bump stocks – an action that the NRA does not support and that is the subject of legislative efforts in Congress.

Speaking to governors at the White House Monday, Trump cast the drive to ban the gun accessory as something he would do personally – although he has tasked Attorney General Jeff Sessions, who oversees the Bureau of Alcohol, Tobacco, and Firearms, to deal with it.

Trump also appeared to tip the hand of a regulatory strategy. 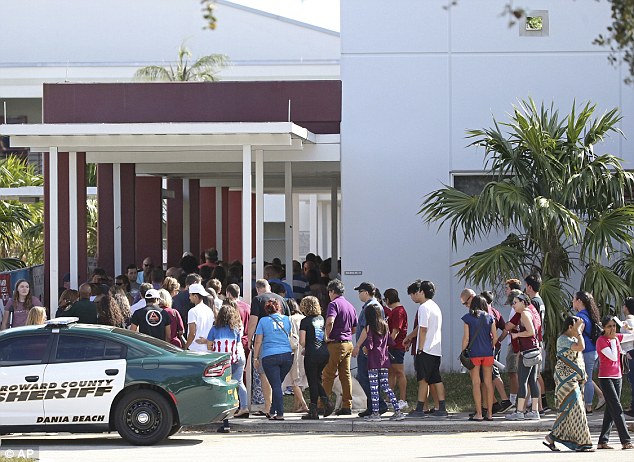 Parents and students walk into Marjory Stoneman Douglas High School on Sunday, February, ahead of its official opening on Wednesday 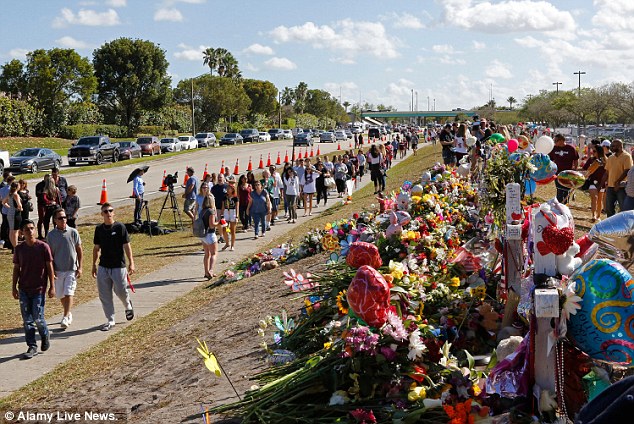 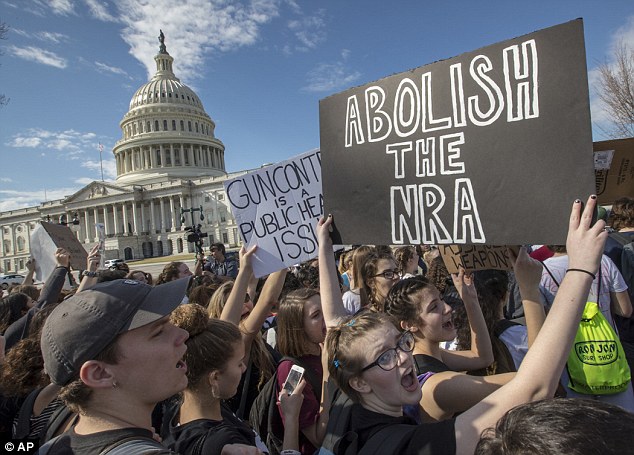 School students from Montgomery County,  in suburban Washington, rally in solidarity with those affected by the shooting at Marjory Stoneman Douglas High School in Florida, at the Capitol in Washington on February 21

‘You put it into the machine gun category, which is what it is It becomes essentially a machine gun and nobody’s gonna be able – it’s going to be very hard to get ’em,’ he said.

Trump may have been saying regulators would consider bump stocks to be a machine gun, which is banned under existing gun laws.

An investigation is also being launched into the law enforcement response to the shooting after it was revealed that deputy Scot Peterson, the school’s assigned security officer, never went into the building to try and stop the shooter after the attack began.

There are claims that three other Brownward county deputies also allegedly failed to enter the school to tackle the shooter.

Both the police and FBI acknowledge there were opportunities missed when it came to dealing with multiple red flags about the shooter, including one comment he left online, proclaiming he was going to be a ‘professional school shooter.’