Student wins £4,000 in damages from South Wales Police after being put in chokehold

Student wins £4,000 in damages from South Wales Police after being put in chokehold when he mistaken for a burglar on night out in Cardiff

A student who claims he ‘struggled to breathe’ as he was placed in a chokehold by police who mistook him for a burglar has won £4,000 in damages.

Uyioghosa Emmanuel Aigbe, 31, was wrongly held on the floor and arrested by South Wales police officers as he waited for a taxi in Cardiff city centre at 5am in September last year after earlier walking into a public building looking for a toilet.

The Nigeria-born student, who had only been in Britain for two weeks at the time, said he was ‘jumped on, trampled on and dropped on the floor’ by officers and was shocked to be put in the ‘mixed martial arts-style’ throat hold.

Mr Aigbe’s civil claim against police told how he felt bodies on top of him while suffering blows to his legs, stomach and groin as he fought for breath from the officer’s chokehold.

Uyioghosa Emmanuel Aigbe (picturted), 31, was wrongly held on the floor and arrested by South Wales police in September last year

He said: ‘I was handcuffed without some sort of communication to tell me what was happening – what I’m meant to have done’.

He was taken to a police station and held for five hours.

Officers told him he was a suspect in a burglary case and later interviewed with a solicitor present. The CCTV footage showed police using ‘excessive force’ and the solicitor advised him to make a complaint.

Mr Aigbe was released under investigation but police seized personal money he had been carrying. He said he also visited the Royal Gwent Hospital in Newport where he was told he had soft tissue damage.

South Wales Police later confirmed they would take no further action after realising no burglary had taken place.

The University of South Wales student pursued a claim for wrongful arrest and was later awarded £4,000 and legal costs when the force settled with Mr Aigbe’s legal representatives.

Mr Aigbe has since returned to his studies at the campus in Treforest, near Pontypridd, where his studies ‘are going well.’

A spokesman for Newport-based legal firm Collinbourne Hennah said: ‘He was unaware what was happening or what was being said to him.

‘When the strikes stopped, he was handcuffed, and only then was when he realised it was the police who were attacking him.

‘Collingbourne Hennah are specialists in civil action against the police who successfully pursued a claim against South Wales Police and recovered £4,000 in damages together with legal costs.’ 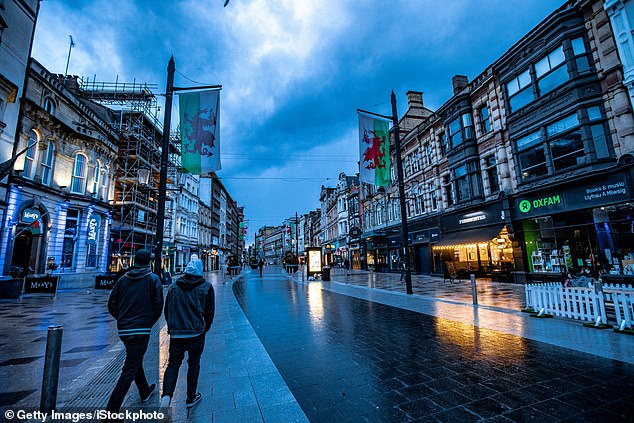 The Nigerian-born student was placed in a chokehold by police as he waited for a taxi in Cardiff city centre at 5am. Pictured: General view of Cardiff City Centre

A spokesman for South Wales Police said: ‘Officers responded to reports of a burglary in Cardiff city centre and arrested a man who had been seen on CCTV entering the building.

‘It was later confirmed that no burglary had taken place and the man was released from police custody.’

The spokesman said the force would ‘seek to learn’ from the incident and any allegations of racism or any injuries suffered did not form part of Mr Aigbe’s civil case.

He said: ‘We acknowledge that a mistake was made in arresting this man for burglary, and a full debrief of the incident to identify any opportunities for learning by South Wales Police is taking place and we remain absolutely committed to taking those forward.’