The anti-malaria drug that US President Donald Trump said he was taking to protect himself against Covid-19 does not reduce the risk of catching the disease, according to research.

Scientists found that hydroxychloroquine, which was once thought to be a potential treatment for coronavirus, offers no protection.

Around 6.3 per cent of hospital workers who took the drug regularly caught Covid-19, compared to 6.6 per cent of people who didn’t.

The effect, they said, was ‘negligible’ and although a slightly higher proportion of people without the drug became sick, it was not a big enough difference to suggest hydroxychloroquine worked.

Whether or not the medicine could help treat people who already had Covid-19 was not studied.

But the most convincing evidence so far has ruled it offers no benefit to the sickest patients, with other research even suggesting it could raise the risk of death. Less robust studies have claimed the drug might be beneficial and there has been no definitive conclusion so far.

In Britain, trials of the drug on coronavirus patients had to be halted because of concerns about its safety, and scientists must now get special permission from the Medicines and Healthcare products Regulatory Agency (MHRA) to use it.

Other research to see whether hydroxychloroquine can prevent Covid-19 is still ongoing, including a trial run by the University of Oxford.

President Donald Trump said in May that he was taking hydroxychloroquine to protect himself from Covid-19, causing a global uproar around the drug. Scientists in the US now say it would not have protected the president 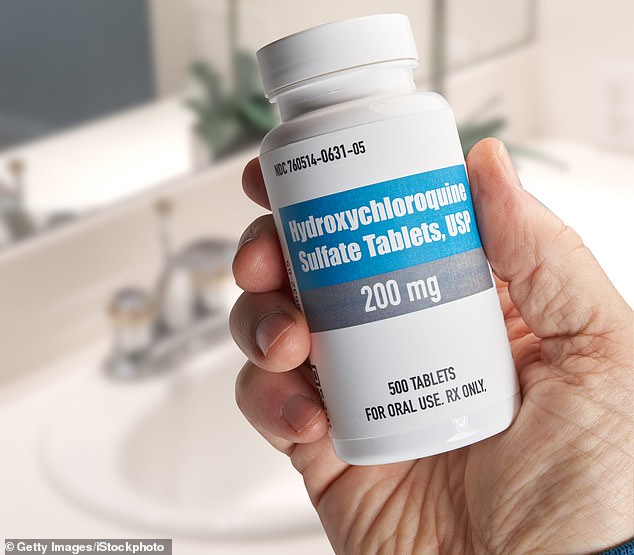 Researchers at the University of Pennsylvania say there is no benefit to taking the medicine to try and prevent coronavirus.

After studying rates of Covid-19 among people who took the drug and people who didn’t, Dr Ravi Amaravadi said: ‘The differences we saw were negligible.

‘And those who did get the virus, whether they were taking hydroxychloroquine or not, were all asymptomatic or had very mild forms of Covid-19.’

The Pennsylvania team looked at a group of 125 health workers in two hospitals in the state, focusing on doctors, nurses, nursing assistants, emergency technicians and respiratory therapists.

The RECOVERY trial is the first randomised study to provide concrete evidence about the drug.

The results will likely have a knock-on effect around the globe, where tens of thousands of coronavirus patients are still being prescribed hydroxychloroquine.

They were split roughly 50/50 into a hydroxychloroquine group, which received 600mg of the medicine every day for two months, and a placebo group, which was given pills that looked the same but didn’t contain anything.

Neither group knew whether they were given the real pill or the placebo, and all participants were closely monitored throughout the eight-week study.

To work out who had caught the disease, everyone was tested both for current infection and for past infection – using an antibody test on their blood – three times, at the start, the middle and the end of the study.

None of the eight people who caught coronavirus during the study ended up in hospital, and two of them had no symptoms at all.

Hydroxychloroquine is a prescription-only medicine that is primarily used for malaria-prevention and handed out at travel clinics.

The medicine is also prescribed for some people who live with rheumatoid arthritis and lupus. In these drugs it helps to control immune system over-reactions.

Authorities in Britain have stockpiled supplies of hydroxychloroquine since the start of the coronavirus outbreak, preventing companies from selling them to hospitals or to firms abroad – this is called a parallel export ban.

Hopes were raised that it could tackle Covid-19 after lab experiments found that the medicine could block the coronavirus from entering living cells.

And the way it helps to control the immune system in patients with lupus and rheumatoid arthritis suggested it could prevent the body over-reacting when it is infected with Covid-19, which is thought to be a cause of death in some people.

But the initially promising results do not seem to have been produced in living patients.

Dr Benjamin Abella, leader of the University of Pennsylvania’s study, said: ‘This work represents the first randomized trial of hydroxychloroquine’s [preventative] effect for those not yet exposed to Covid-19.

‘And while hydroxychloroquine is an effective drug for the treatment of diseases like lupus and malaria, we saw no differences that would lead us to recommend prescribing it as a preventive medication for Covid-19 in front line workers.’

The study went on from April 9 until July 14.

The scientists also had regular ECG heart scans because other research has suggested the medicine can cause irregular heart rhythms when taken in large doses.

But no negative effects were seen and the 600mg-per-day dose did not seem to have any effects on the participants’ hearts.

The study was published in the journal JAMA Internal Medicine by the American Medical Association.

Scientists in the UK will trial arthritis drug adalimumab on care home residents with coronavirus to see if it can help to treat the deadly disease.

Up to 750 people from care homes and those receiving at-home care will be enrolled in the trial to be led by the Oxford Clinical Trials Research Unit.

The drug is of a type called anti-TNF medications (anti-tumour necrosis factor). Anti-TNF drugs have been in widespread use for more than 20 years for a range of conditions that cause swelling inside the body.

Researchers say recent studies have shown patients with Covid-19 already taking anti-TNF drugs for bowel disease and arthritis are less likely to be admitted to hospital.

Professor Duncan Richards from the University of Oxford, said: ‘We think anti-TNF drugs could be an important treatment for Covid-19 and are very grateful for the support of the Covid-19 Therapeutics Accelerator, which will allow us to find out.’

The researchers hope to start recruiting patients for the trial in late October. The AVID-CC trial will be delivered by Hospital at Home teams around the UK.

It is a relatively new service in which hospital-based teams reach out into the community to deliver more complex treatment interventions while avoiding the need for admission to hospital.