Faced with a fussy child who refuses to eat their greens, bribery can be extremely tempting.

But the bad news for parents is that offering their little darling a reward for clearing their plate will not really work.

Whether it is sprouts or spinach your child hates, putting it in front of them again and again seems to be the best strategy. Offering them a reward at the same time has little added benefit, Belgian researchers found.

A study of 154 nursery school children found just over 95 per cent of children would eat a vegetable they didn’t like after four weeks of being given it.

Children offered stickers and toys on top of that improved the proportion willing to eat up their greens by approximately only two per cent.

The researchers from Ghent University in Belgium state: ‘In sum, the results of the current study confirm the conclusions of previous research that liking and consumption of an initially disliked vegetable can be improved through repeated taste exposures.

‘In a general sample of preschool children, rewarding provides neither detrimental effects nor additional advantages over repeated neutral exposure.’ The vegetable chosen for the study was chicory -chosen by mothers as most disliked out of 10 vegetables including sprouts, peas, spinach and courgettes.

The bitter-tasting salad plant was served up in the canteen of two nursery schools at break-time, with children split into three groups. 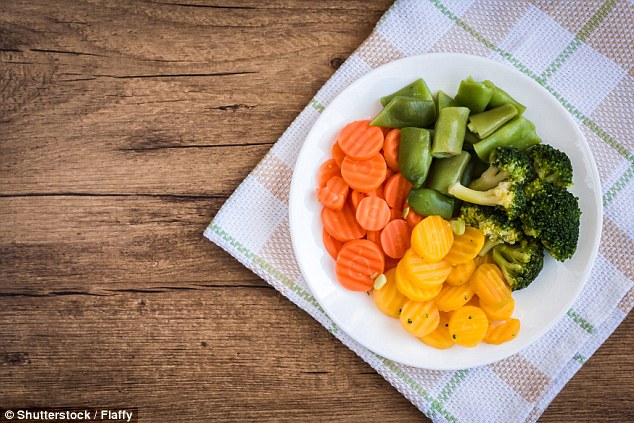 One group was simply asked to try the vegetable with no further encouragement, while the second set of children were offered stickers and the chance with enough stickers to win a toy.

The third group were offered verbal praise, which worked better than the stickers in the first trial.

But after being given chicory eight times over a month, there was little difference.

More children ate the chicory when simply asked to do so than if they were actively praised for doing so, and those given stickers and toys were hardly more likely to eat it.

The study is published in the journal Food Quality and Preference.