An unusual audio clip last month divided the world with the question ‘do you hear the word “yanny” or “laurel”?’

The viral sound clip was shared by thousands across social media, as people debated whether they were hearing the word ‘yanny’ or ‘laurel’ in the recording.

If members of your family disagree on what they can hear, that may be because older people are more likely than younger ones to hear ‘laurel’.

Now researchers have created another illusion, which is designed to show how we can confuse talking for singing.

The perplexing phenomenon, known as the ‘Speech-to-Song Illusion’, occurs when a spoken phrase is repeated so many times that it begins to sound like song.

Scientists from the University of Kansas (KU) say this is because when a phrase is repeated, the area of the brain that processes speech begins to tire.

However, the syllable detectors do not tire as quickly as those responsible for words.

‘There’s this neat auditory illusion called the Speech-to-Song Illusion that musicians in the ’60s knew about and used to artistic effect – but scientists didn’t start investigating it until the ’90s,’ said lead research Michael Vitevitch, professor and chair of psychology at KU.

Dr Vitevitch said previous studies have looked into the characteristics of phrases that contribute to the illusion, and found the ‘Speech-to-Song Illusion’ occurs in English, German and Mandarin.

Further studies have revealed that the brain uses different regions to process speech and song.

‘But nobody had a good explanation about how this illusion was coming about in the first place,’ Dr Vitevitch said.

‘A lot of the researchers who looked at this were music-perception scientists, but there weren’t a lot of people coming at it from the speech-and-language side.’

In order to work out why this happened, researchers designed six studies and found word detectors are the first to be activated, giving people the perception of speech.

‘Like with muscles, you have a type of muscle for short bursts of sprinting and also muscles for endurance, like running a marathon’, he added.

Researchers used random lists of words to prevent the inherent intonation in everyday speech from influencing the subject’s perception of musicality. 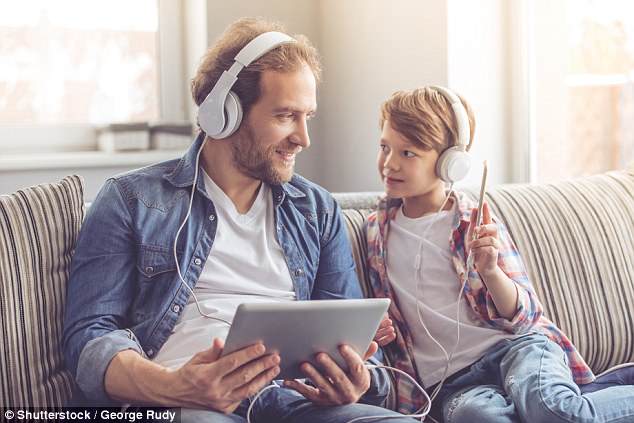 WHAT WAS THE YANNY OR LAUREL DEBATE?

It is the rather unusual question dividing the nation, and indeed the world.

When you hear an audio clip which has gone viral, do you hear ‘yanny’ or ‘laurel’?

If members of your family disagree, that may be because older people are more likely than younger ones to hear ‘laurel’.

Or it could depend where you heard the recording, as a bass-heavy car stereo can change which word you detect.

Stranger still, people who hear ‘yanny’ are more likely to hear a woman’s voice, while those who hear ‘laurel’ will hear a man.

Whichever word you hear, the debate dominated offices and living rooms yesterday, with celebrities including Ellen DeGeneres and Stephen Fry weighing in.

The phenomenon has echoes of the argument that arose in 2014 when people quarrelled over whether a dress posted on Twitter was gold and white or blue and black.

Academics have provided a range of explanations for the auditory illusion.

Valerie Hazan, professor of speech sciences at University College London, said: ‘The sound online seems to have been made deliberately ambiguous and people are being primed to hear ‘yanny’ or ‘laurel’.

‘The issue is that this speech does not quite fit into the auditory patterns you expect for these two words so your brain is trying to find a “best fit”.

‘If your brain latches on to one of the high frequency auditory patterns, at around 3,000 hertz, that is going to push you more towards yanny.

‘If you pick up on another auditory pattern in the sound which is at a lower frequency of 1,000 hertz, that is more consistent with laurel.’

It was then posted on video-sharing site YouTube where it was shared hundreds of thousands of times.

Fry tweeted: ‘I’m puzzled that anyone can hear #Yanny – I hear #Laurel very clearly… I can’t even begin to hear #Yanny.’

Chat show host Ellen DeGeneres wrote on Twitter: ‘Literally everything at my show just stopped to see if people hear Laurel or Yanny. I hear Laurel.’

‘We tried to strip musicality away by randomly putting words together without intonation shifts, so it didn’t sound musical at all to begin with’, said Dr Vitevitch.

‘When people hear it once, they said it didn’t sound musical at all.

‘The fact that we could get people to shift perception to something musical after several repetitions gives us confidence that we’re on the right track with the mechanism explaining the effect’, he said.

Dr Vitevitch said lots of scientists are trying to understand how the brain works, ‘so, any opportunity to get a crack in the black box where you can look inside, you need to take.’

‘Things like illusions are often dismissed, but they’re unique opportunities to get another angle on what’s going on,’ he added.

‘Yes, they’re kind of fun and interesting and goofy and they get attention – but really they’re another opportunity to see what’s going on inside the black box’, he said.