Feast your eyes on this selection of stunning entries for the prestigious CEWE photography awards – taken by female photographers.

The competition, which has previously had almost half a million entries from across the world, has shared the top images taken by female photographers in 2019 to launch its 2020 contest.

CEWE is encouraging budding photographers to find the beauty in the small things, as well as discovering fresh perspectives in ordinary life in a time when many of us can’t stray too far from home.

However, the competition is also open to images taken at any time, meaning you can submit photos you have taken in the past.

Clare Moreton, photo expert at CEWE UK, said: ‘Now more than ever before, photos are connecting people from around the globe, so it’s a great time to be launching the fourth edition of the CEWE Photo Award.

‘With 448,152 photos submitted last year, the CEWE Photo Award is now the world’s largest photo competition and we are looking forward to sharing lots more beautiful images from photography enthusiasts from across the world this year.’

Marina C. Hewig captured this incredible tunnel of lights in an image she called ‘Timetunnel’, which was taken in Kronshagen, Germany 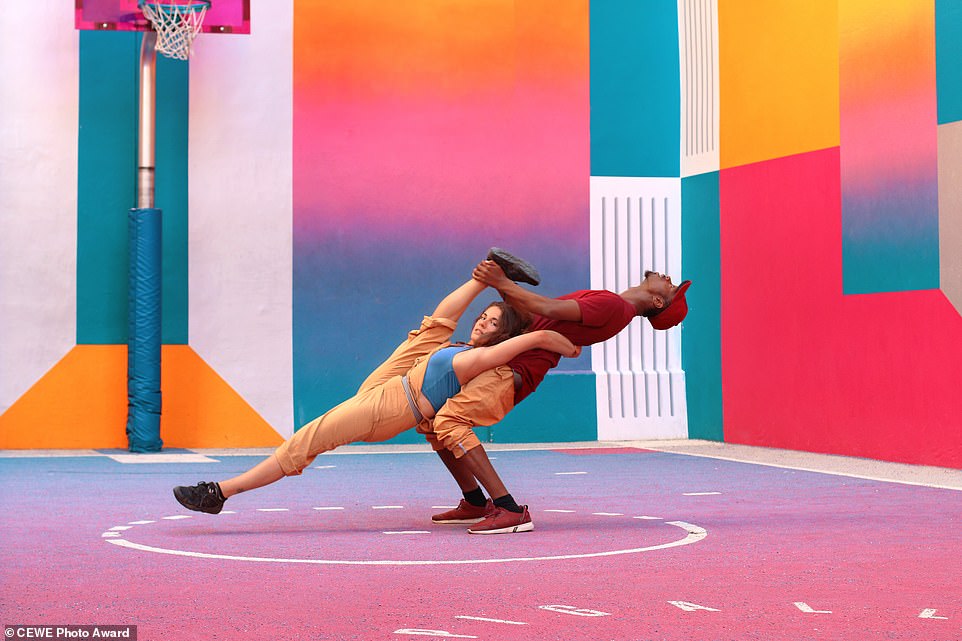 Meanwhile one couple posed for this stunning image in a photograph entitled  ‘A harmony’ by Laura Moutinho, which was taken in Paris, France 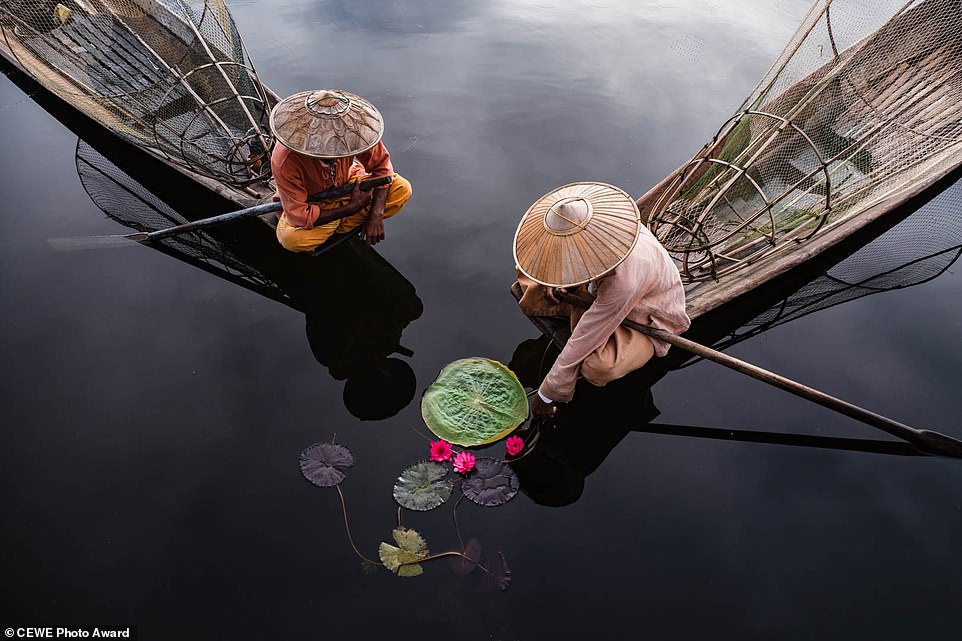 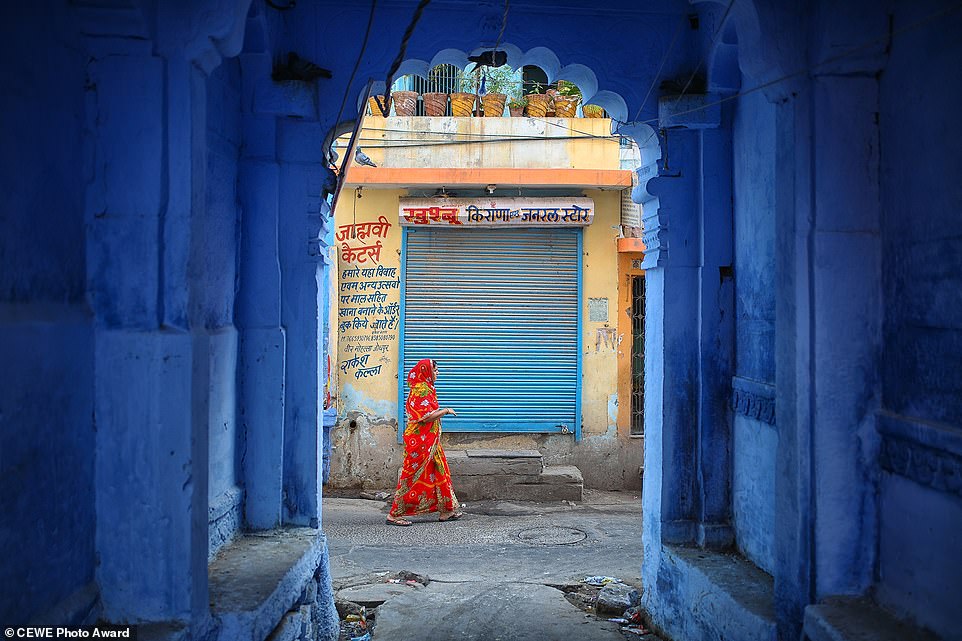 In this incredible shot, Jurica Galić managed to capture the electric colour of the walls as well as the walker’s outfit in the image called  ‘Blue city’, which was taken in Jodphur, India 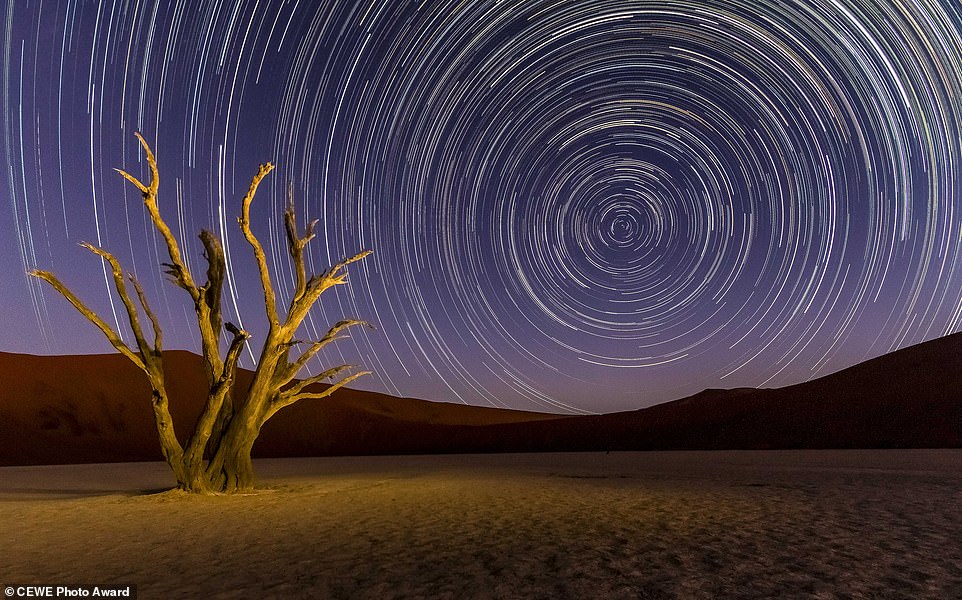 This electrifying image by Sofie Rysheuvels was taken in Sesriem, Nambia, with the magical photograph entitled ‘Deadvlei star trails’ 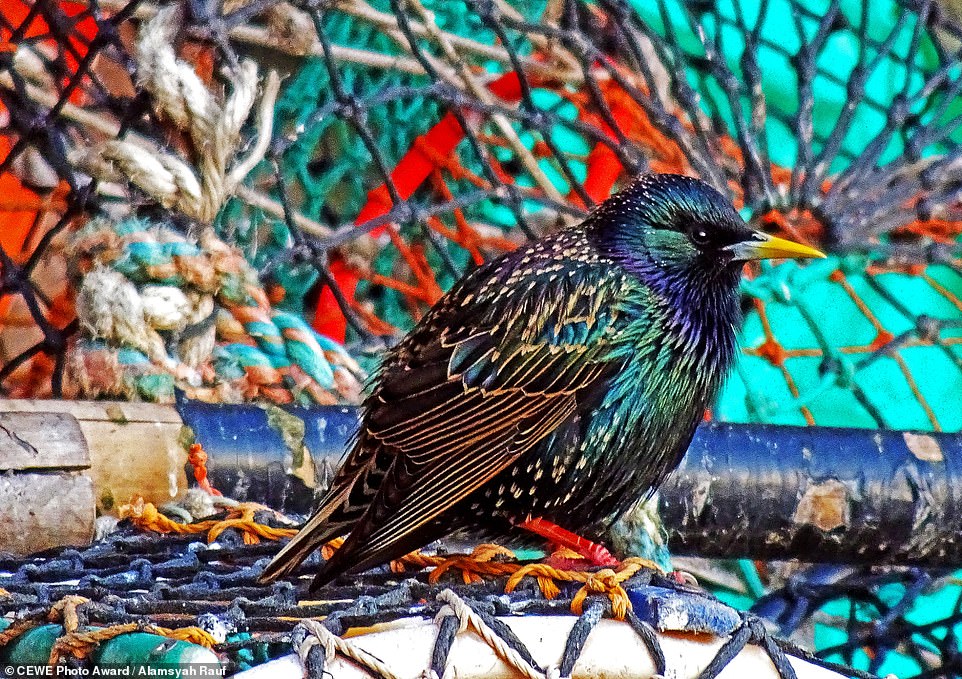 Birds of a feather! Catherine Ogden managed to capture the stunning image of a ‘Shimmering Starling’ in Beadnell, Northumberland 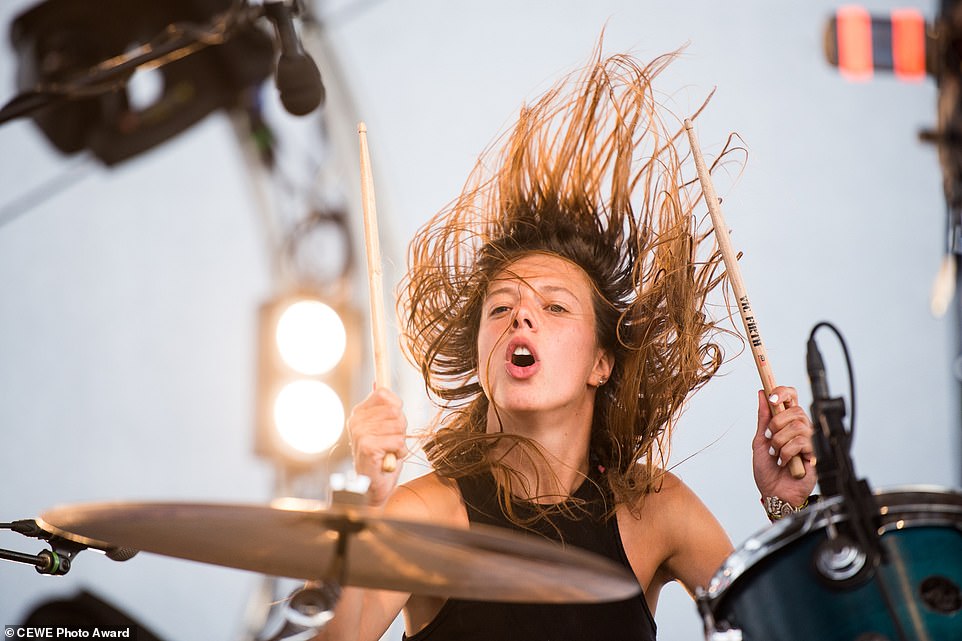 Rock on! One photograph managed to capture the image of a drummer in full flow during a concert (pictured ‘The drummer’ by Saša Huzjak, taken in Trenčin, Slovakia) 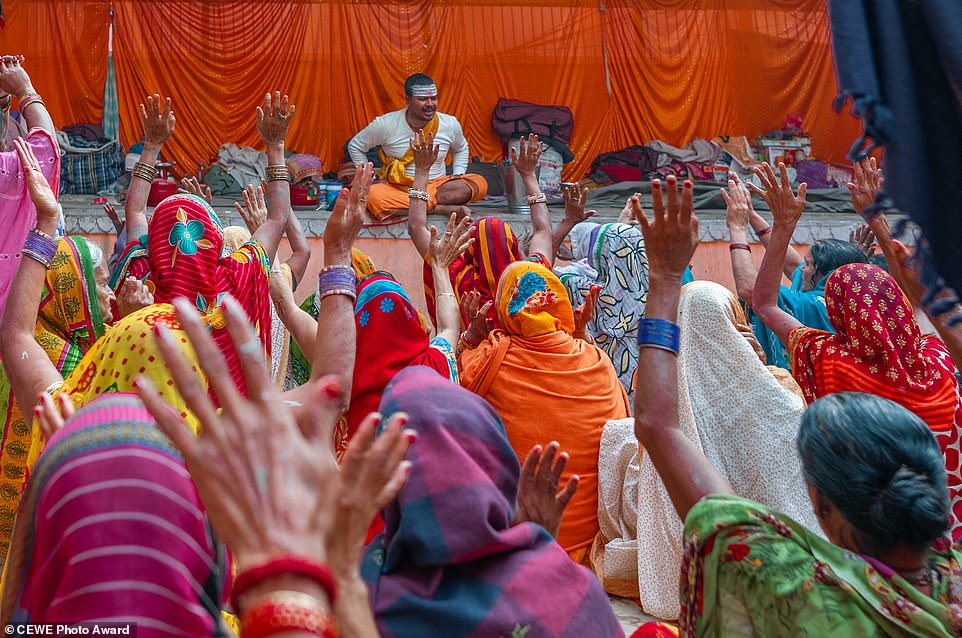 The images were submitted from photographers from all around the world , including ‘Varanasi Joy’ by Louise Waldron, which was snapped in Varanasi, India 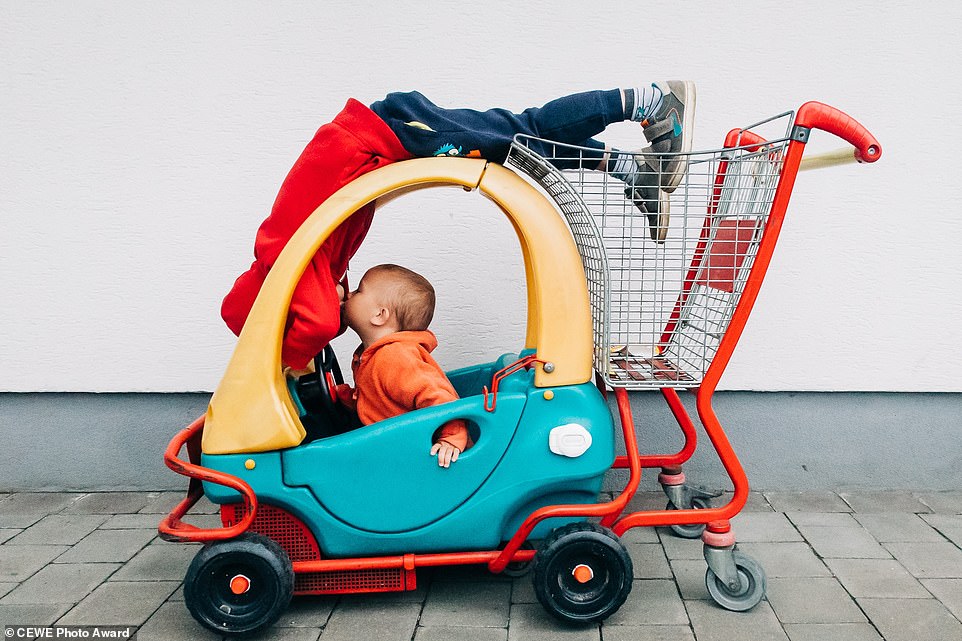 While some images showed exotic destinations, other snaps reveal the everyday life of the photographers (pictured, ‘Sibling love’ taken by Sabine Doppelhofer in Graz, Austria) 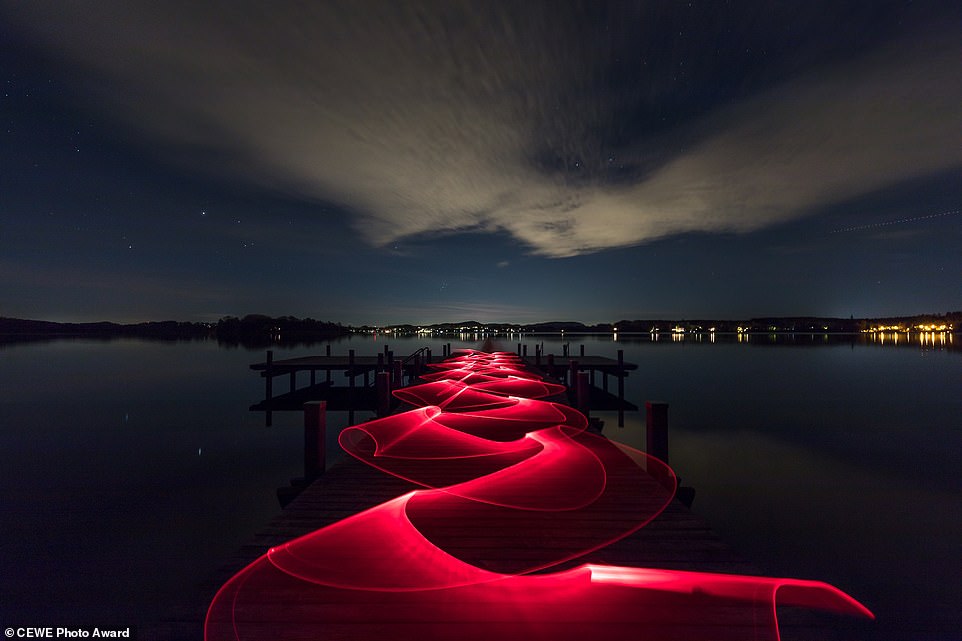 Meanwhile Nicole Glasner was able to capture the stunning ‘Light painting on the lake’ during a visit to Wörthsee, Germany 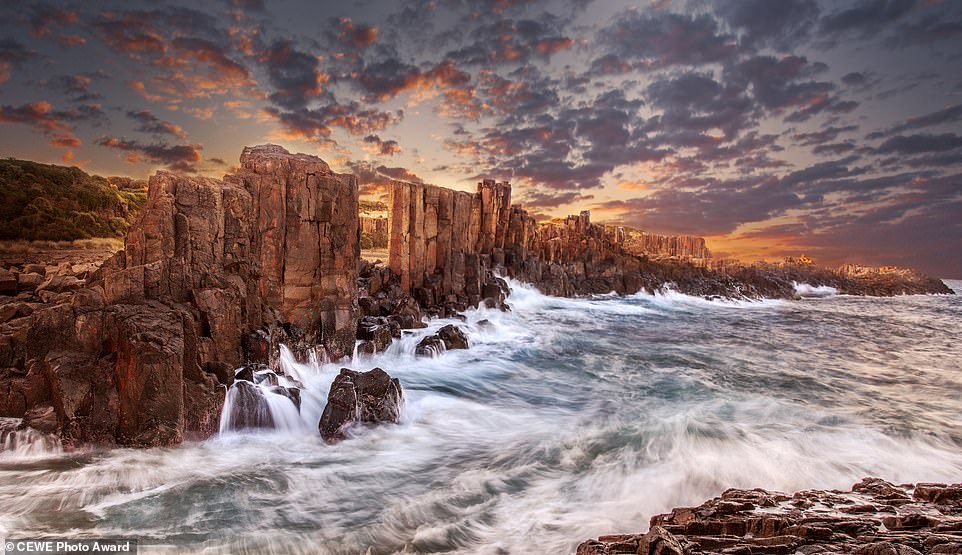 Other images showed incredible scenery, including The Wall by Linda Wie, which was taken in Bombo, Australia 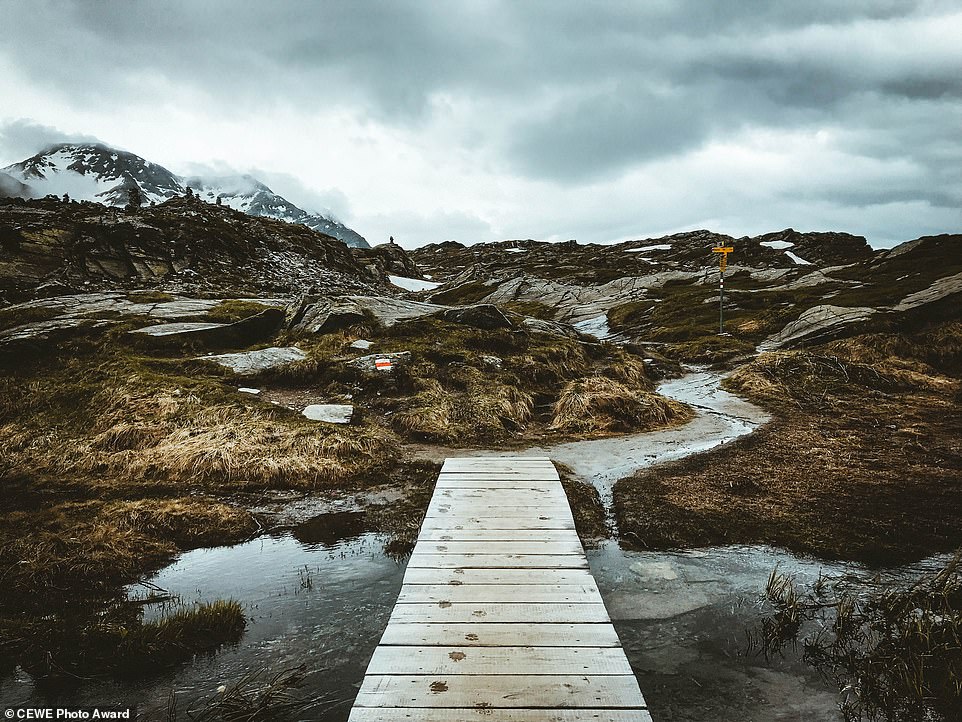 One walker, Annemarie Imgrund, snapped the stunningly eery ‘Julier Pass hike’ while out on a hike in Switzerland 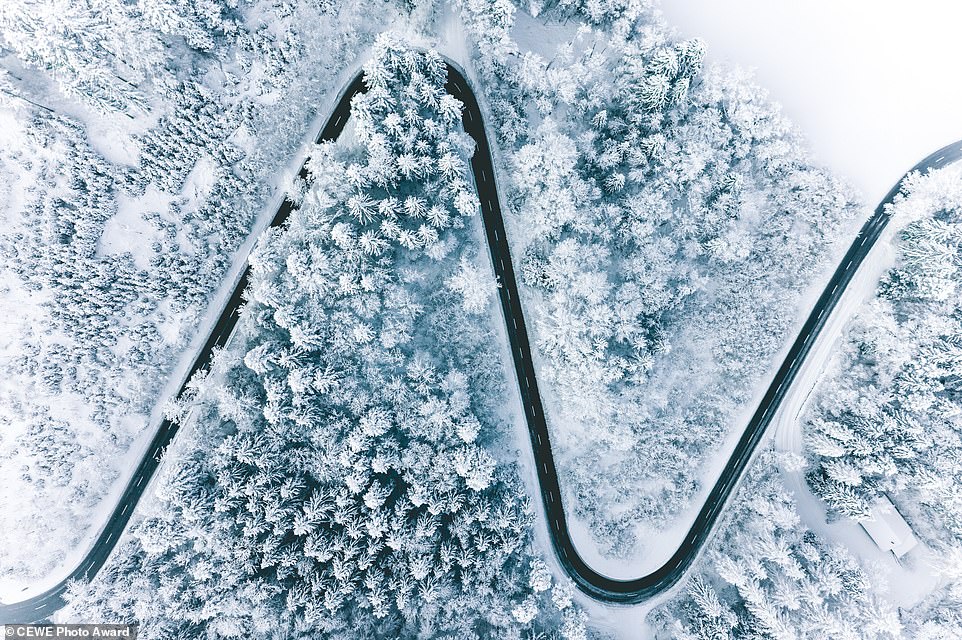 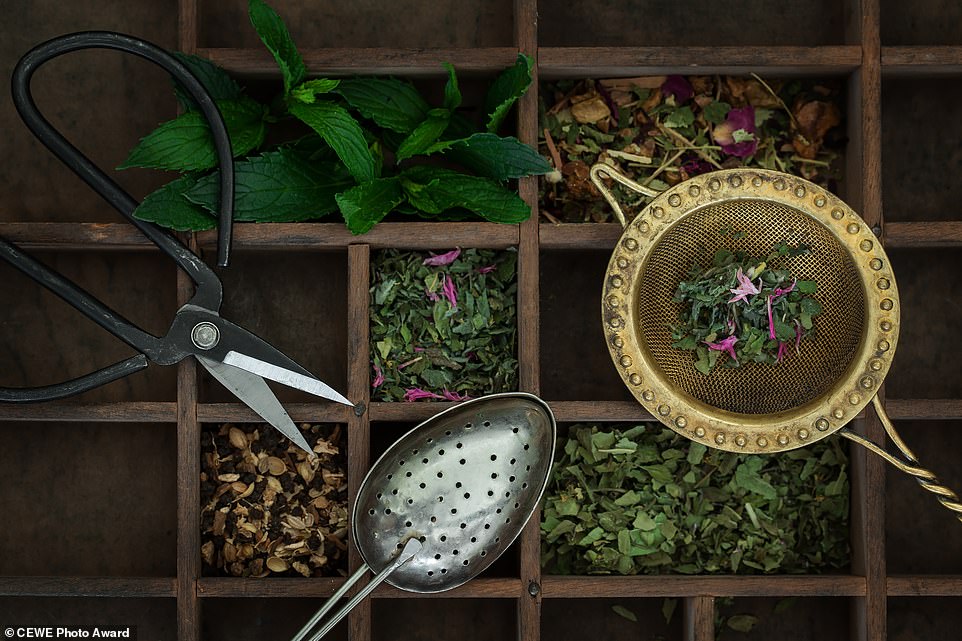 While some images showed the exceptional scenery, others showed more mudnane scenes, including one showcasing tea leaves, by Stephanie Judd taken in Bern, Switzerland 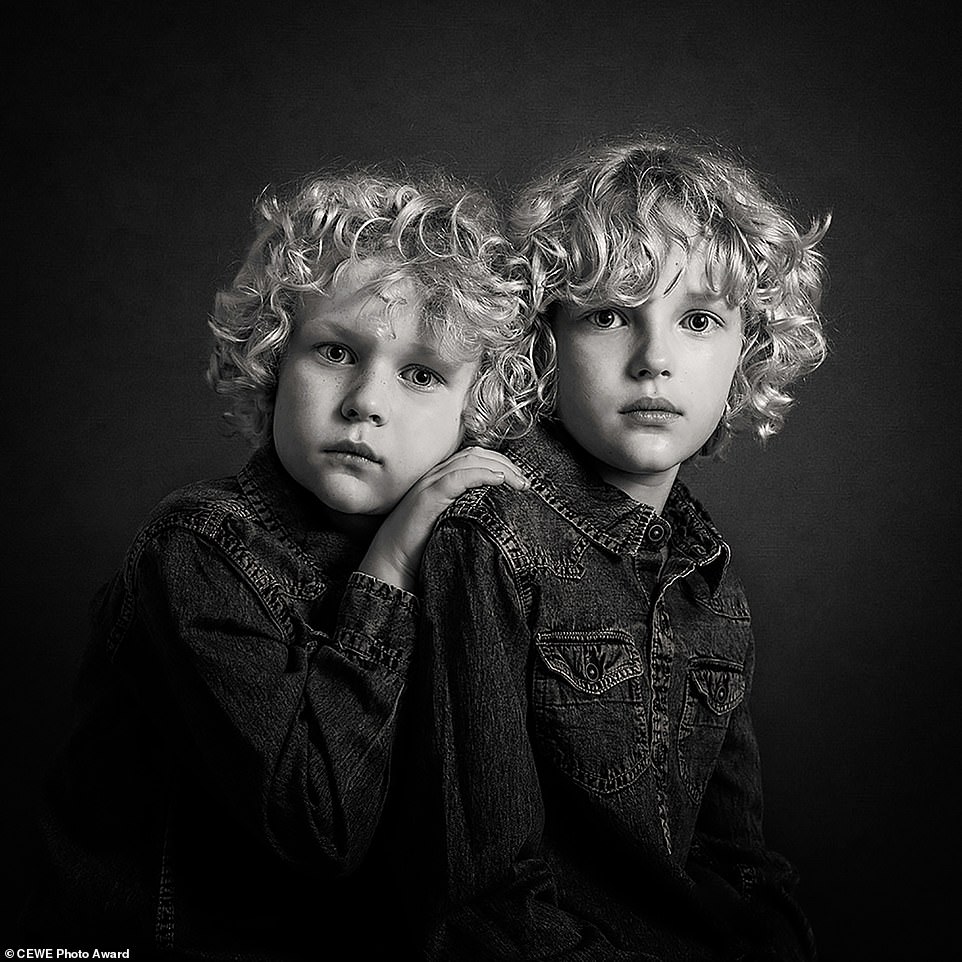 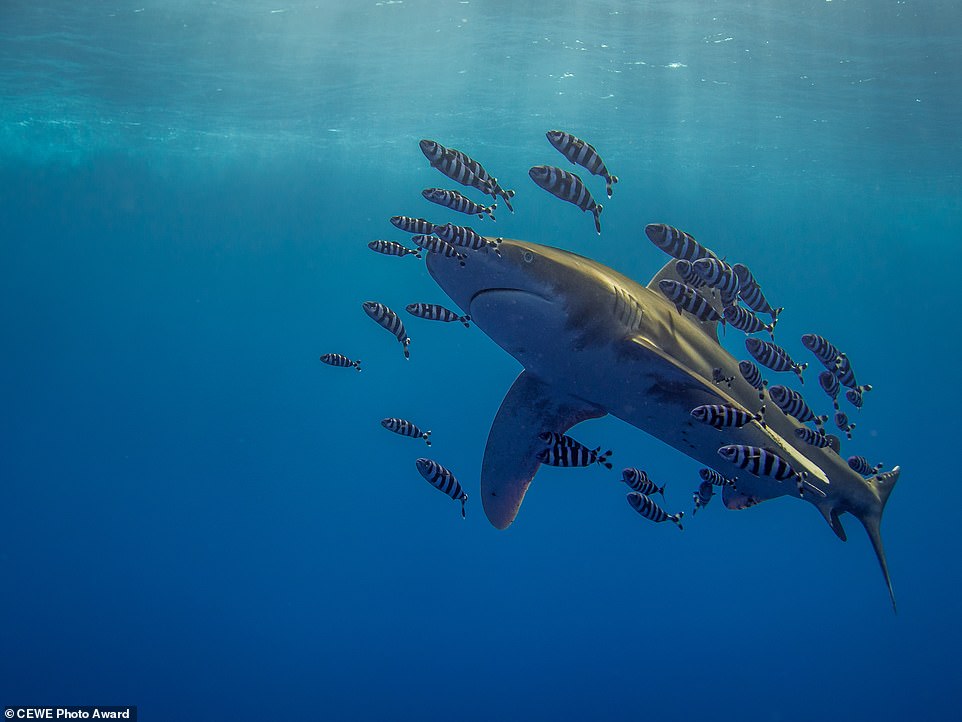 Other submissions to the competition include this exceptional photograph of a shark surrounded by a school of fish (pictured, ‘Big shark, little fish’ by Martina Andres, taken in Marsa Alam, Egypt) 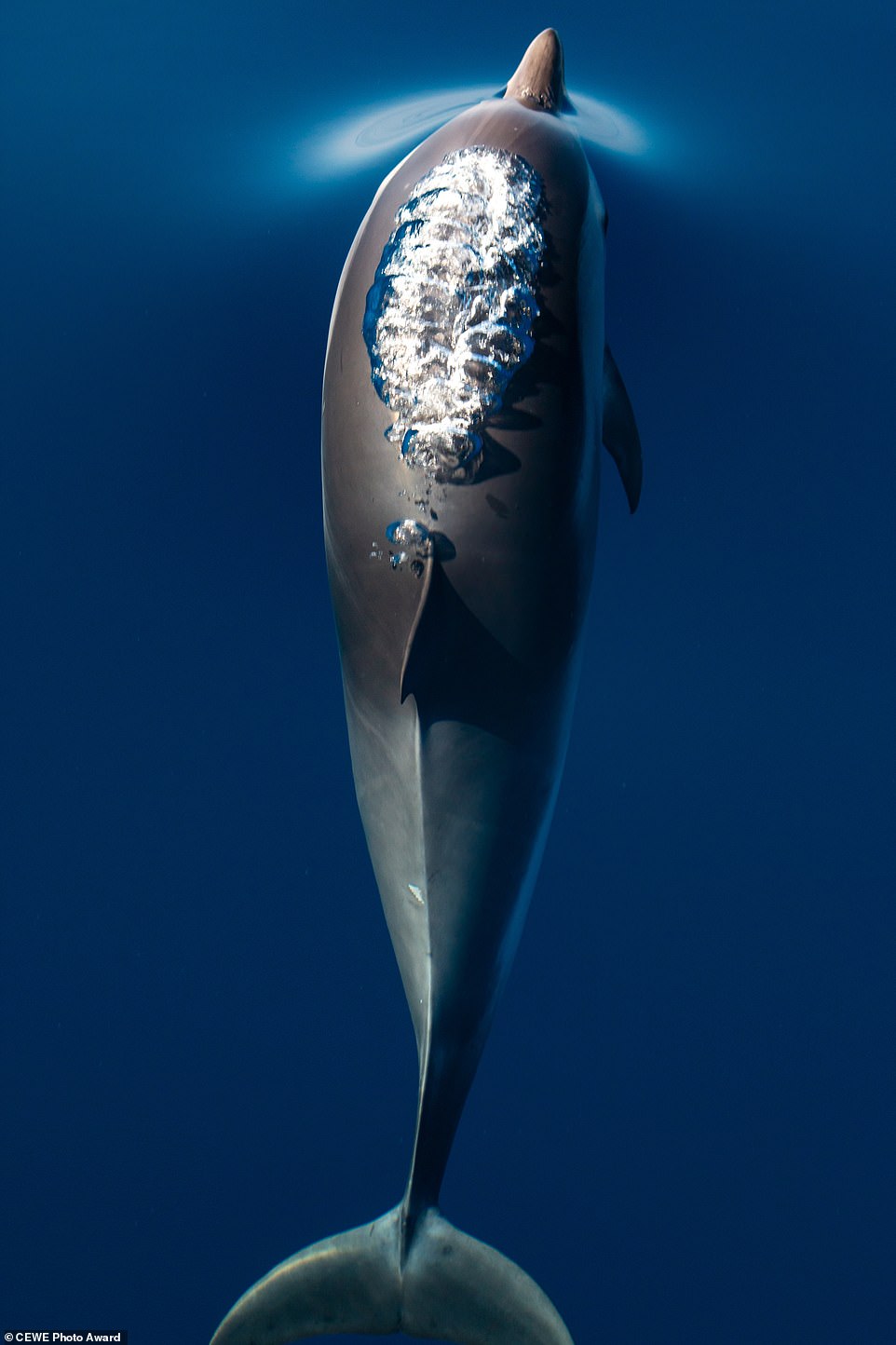 Submissions for the photography award included images of animals in their natural habitat, including ‘Mirror dolphin’ by Stéphanie Vigetta, taken in Marseille, France. 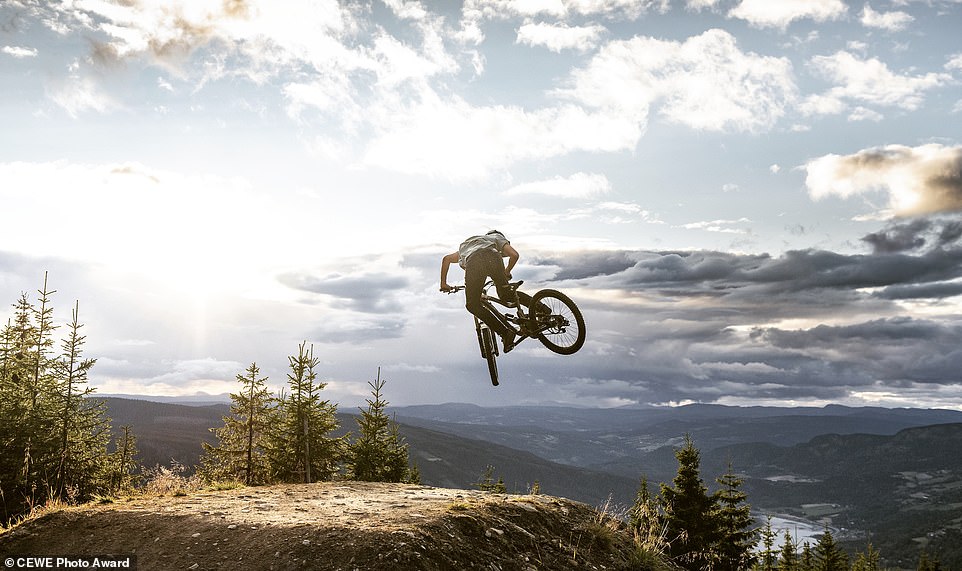 Wild and free! One photographer managed to snap the perfect image of a BMX biker taking off into the air (‘Sunset shred’ by Gisle Johnson, taken in Øyer, Norway) 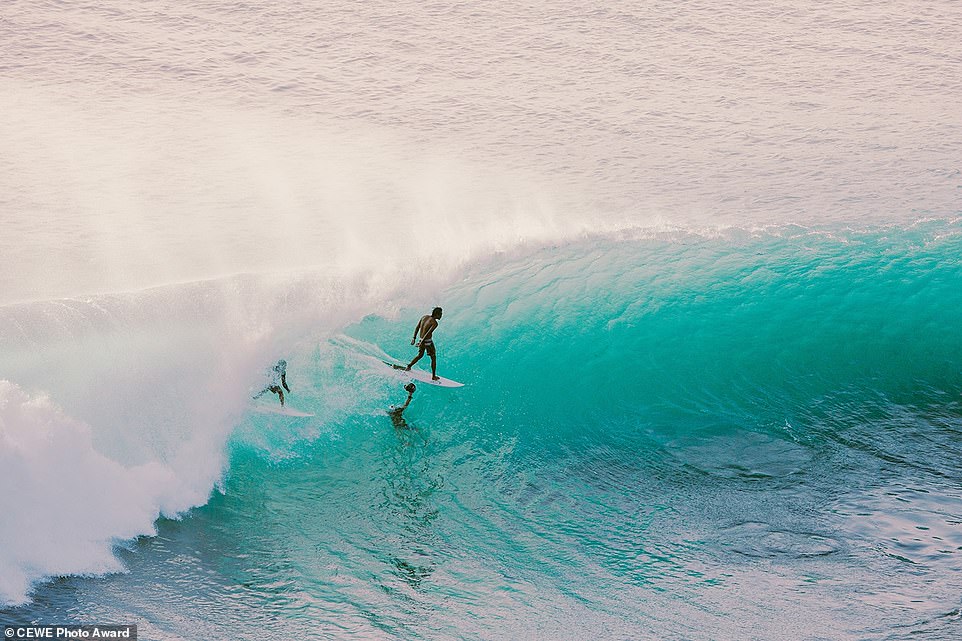 Taking to the waves! Jasmine Perrson managed to capture the stunning ‘Power of Padang Padang’ as she snapped surfers enjoying a ride in Bali, Indonesia 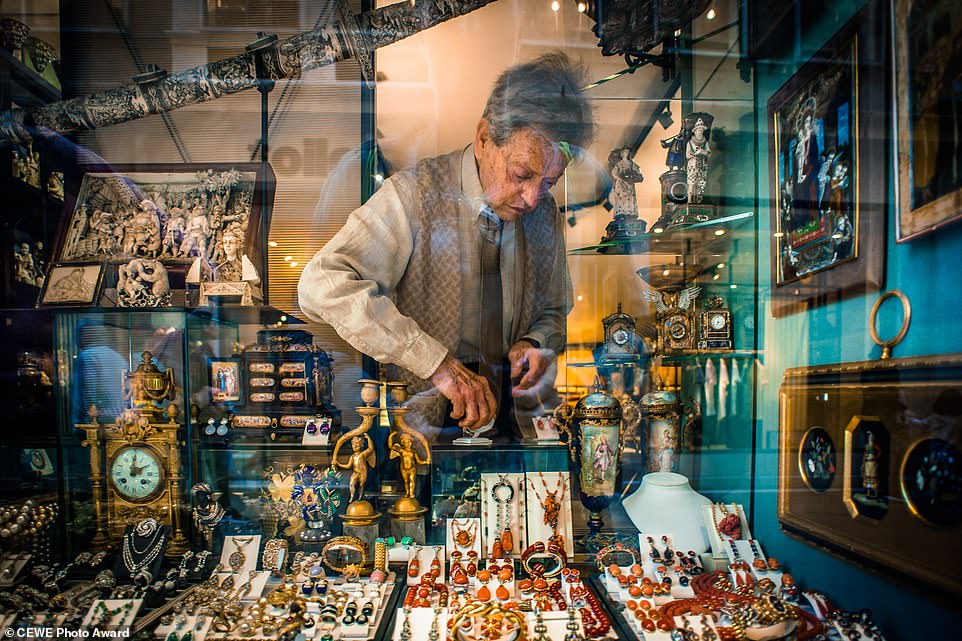 The photography competition attracts hundreds of thousands of entries each year (pictured, ‘Antiques’ by Jana Kupčáková, taken in Venice, Italy) 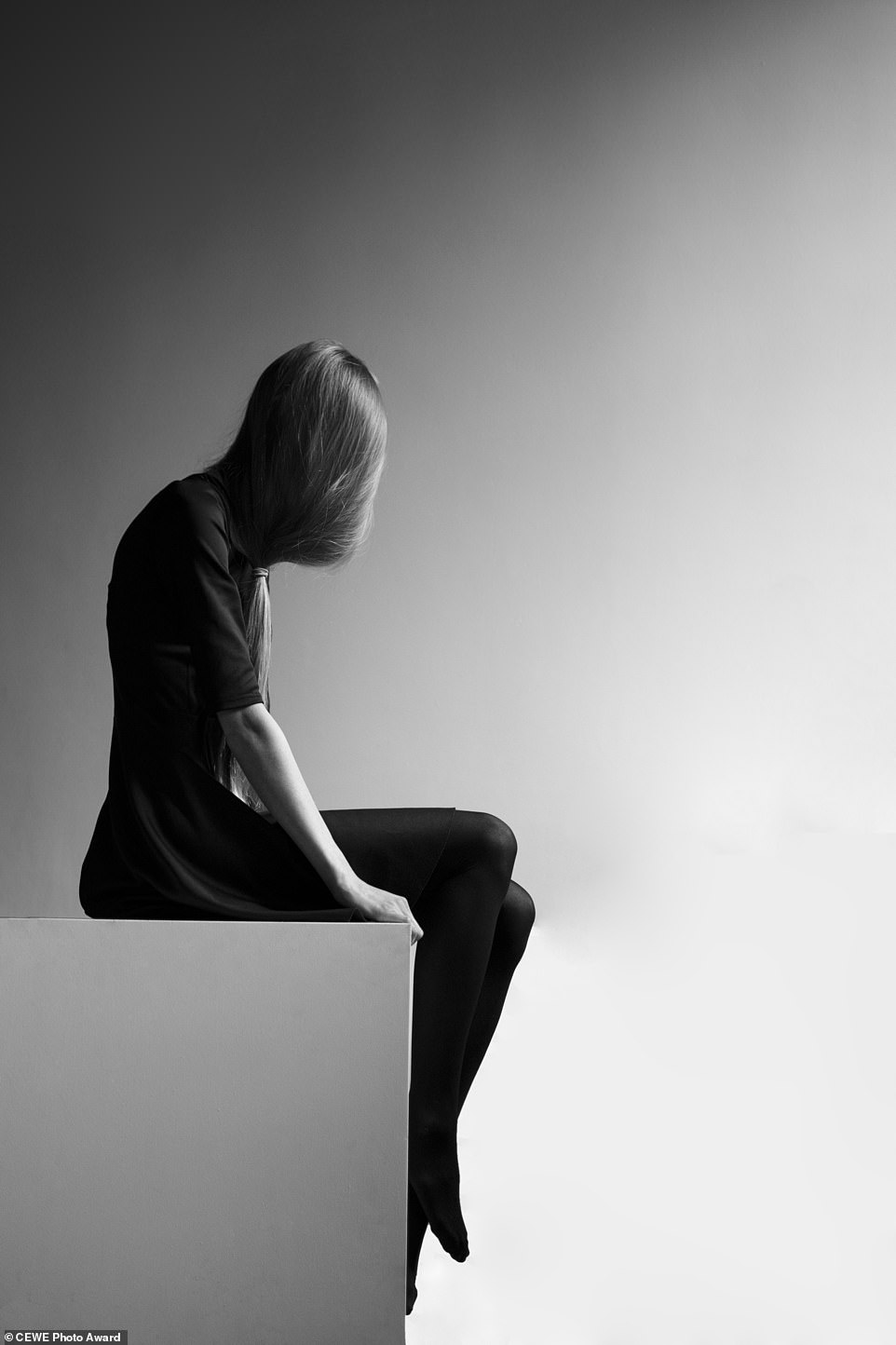 While many of the photographs were taken  outside, others had been shot in photography studios (pictured ‘Yes’ by Klaudia Furmańczak taken in Leszno, Poland) 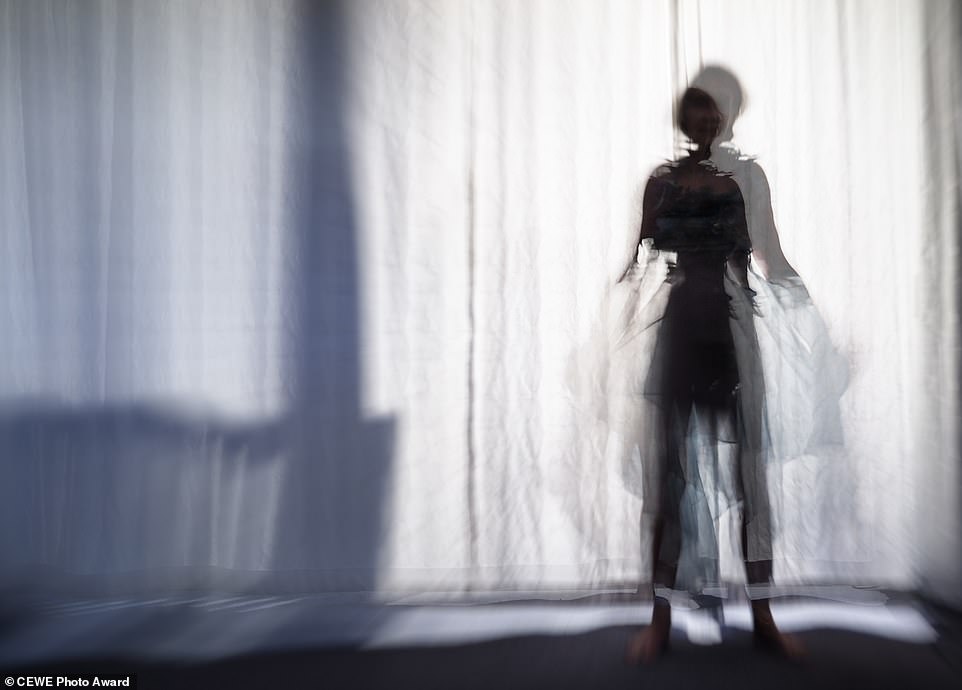 Another eerie shot shows a woman dancing against a white curtain with a mysterious shadow against the wall (‘Dancing’ by Ute Hartung, taken in Zirndorf, Germany) 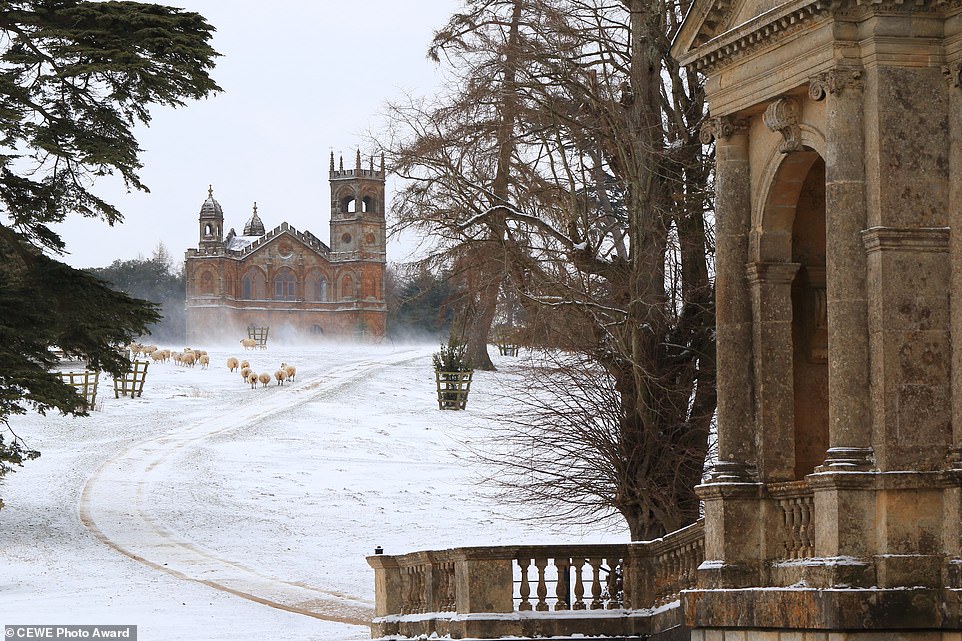 While many of the photographs come from people across the world, some have been taken in the UK and show familiar scenes (‘Sheep in the Snow’ by Jane Hamilton, taken in Stowe, Buckinghamshire) 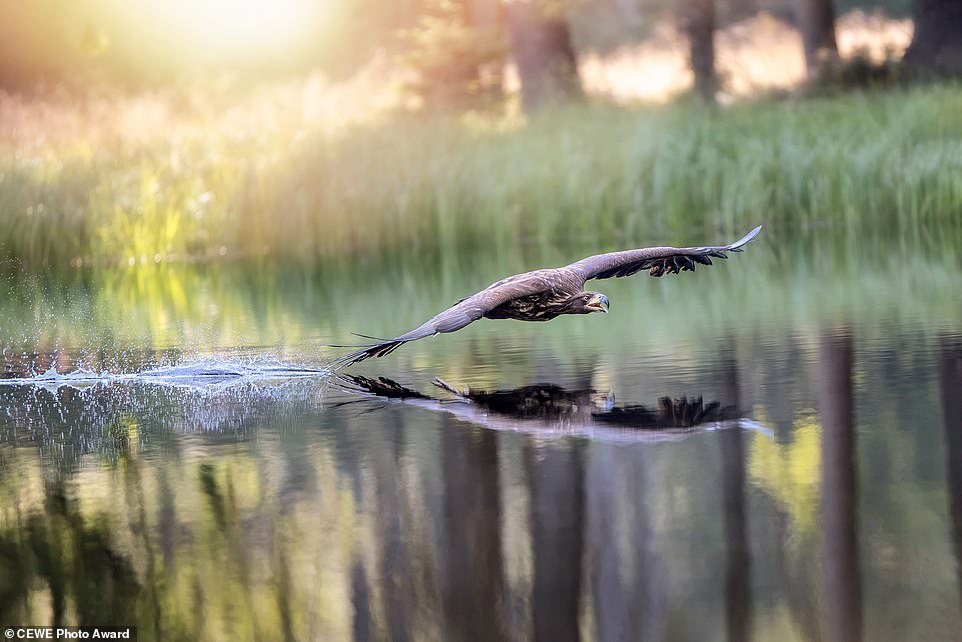 A bird skims across a lake in this stunning photograph ‘freedom’ by Susanne Karl, taken in Schwäbisch Gmünd, Germany 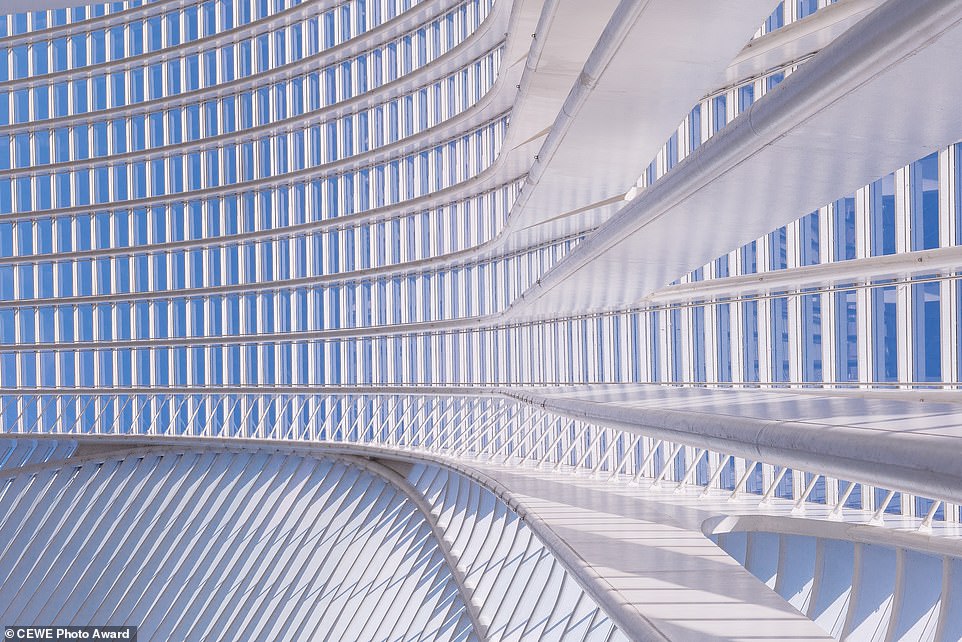 ‘The Lightness of Being’ by Doris Jachalke taken in Lüttich, Belgium, stands out from the other photographs as it showcases the incredible architecture 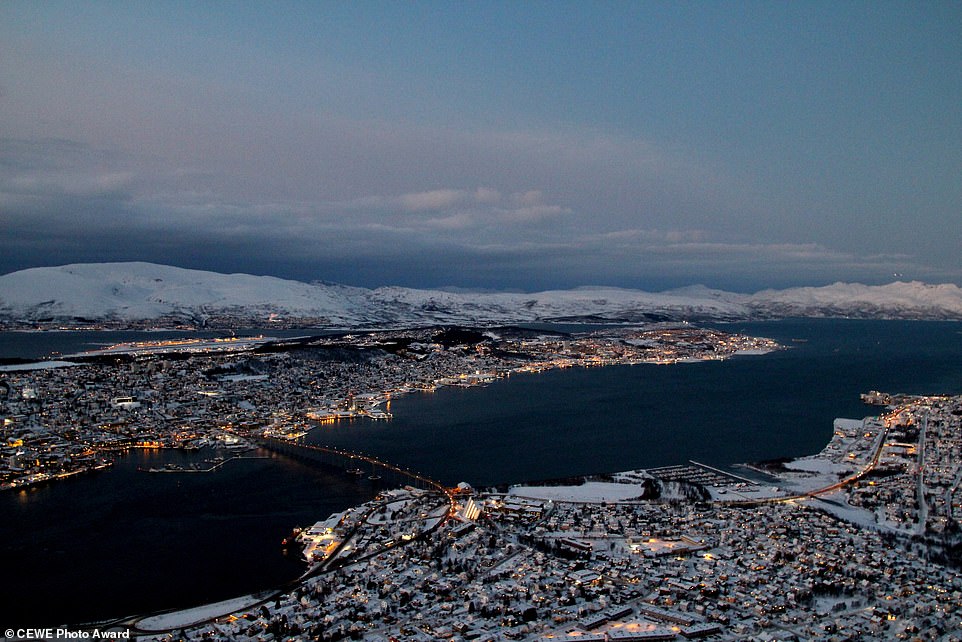 Other birds-eye views showcase city scenes, including this one entitled ‘Tromso’ by Jutta Plank, which was taken in Norway