These beautiful photos show people in a rural Indonesian community going about their every day life.

The cinematic pictures show mother’s tending to livestock and cooking food while children happily play in the nearby river.

Taken in the West Java province of Indonesia, the photos show the “simple and peaceful” lifestyle of the local people.

Photographer Rarindra Prakarsa, 47, said the lives of these people are worlds away from modern civilisation where children are stuck behind smartphones.

He said: ‘Their life is simple. Kids go play and study.

‘Mums go washing by the river, while men mostly do their work in paddy field, some other selling fruits, and some other collecting sands from the river for building material.’

A series of photos show people in a rural Indonesian community going about their daily business. Taken in the West Java province, the photos show the ‘simple and peaceful’ lifestyle of the local people. (Pictured: A farmer and his wife below the canopy of in West Java, Indonesia) 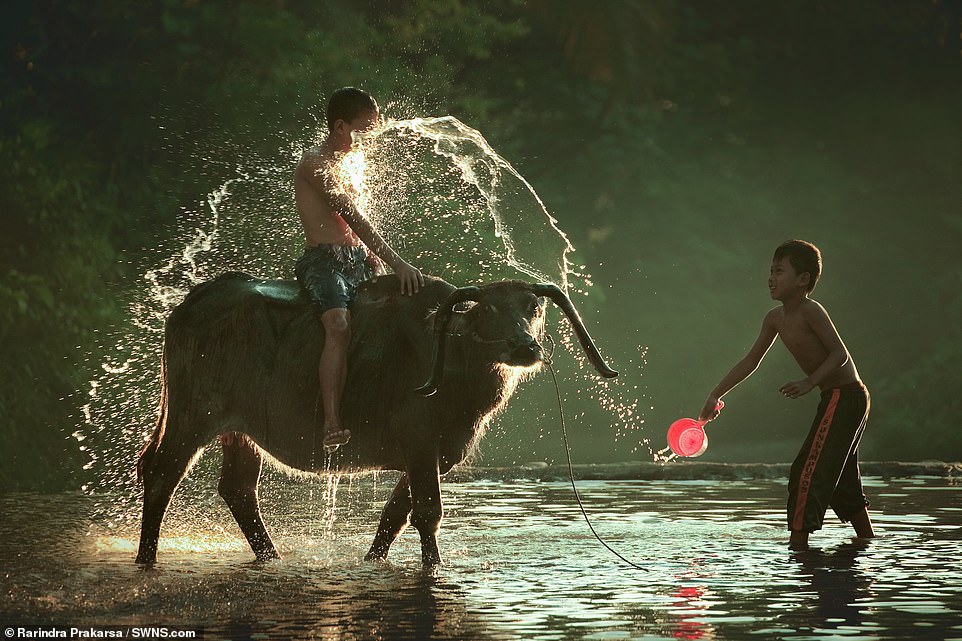 Two boys can be seen playing in the Citarum River in West Java, Indonesia. One boy rides on the back of a water buffalo as his friend cheekily flings a jug full of water at his face. The buffalo, however, looks less than impressed 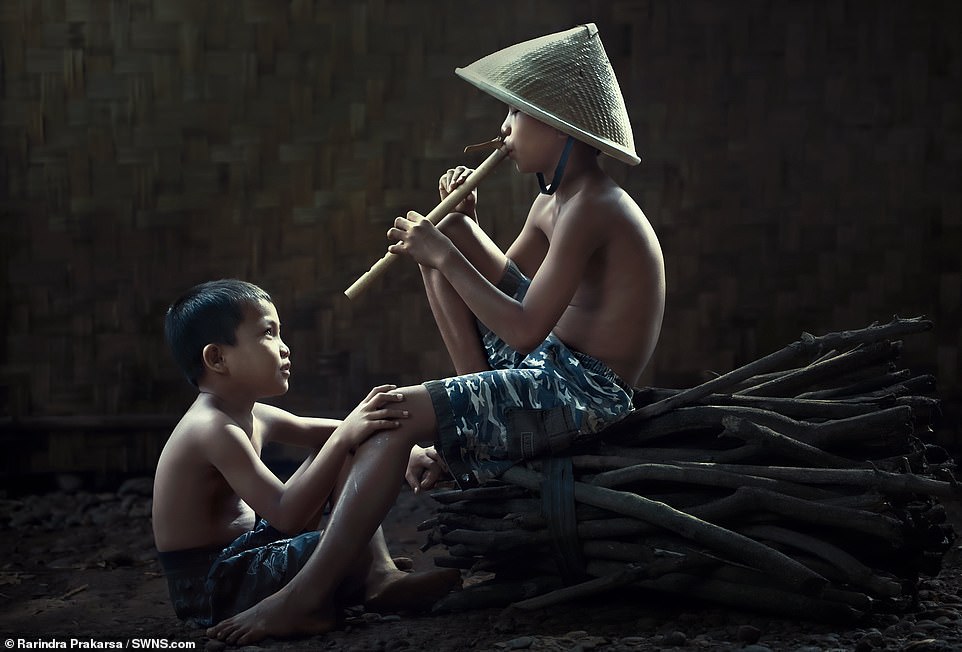 A touching family scene shows a younger brother, left, looking up at his older sibling, right, as he plays a melody on his flute. The older child sits on a bundle of branches with his head topped with a traditional hat as his brother looks up at him, admiring the melodies coming from his flute. West Java is a district in Indonesia, located on an island called Java, which extends out from the country’s capital city, Jakarta 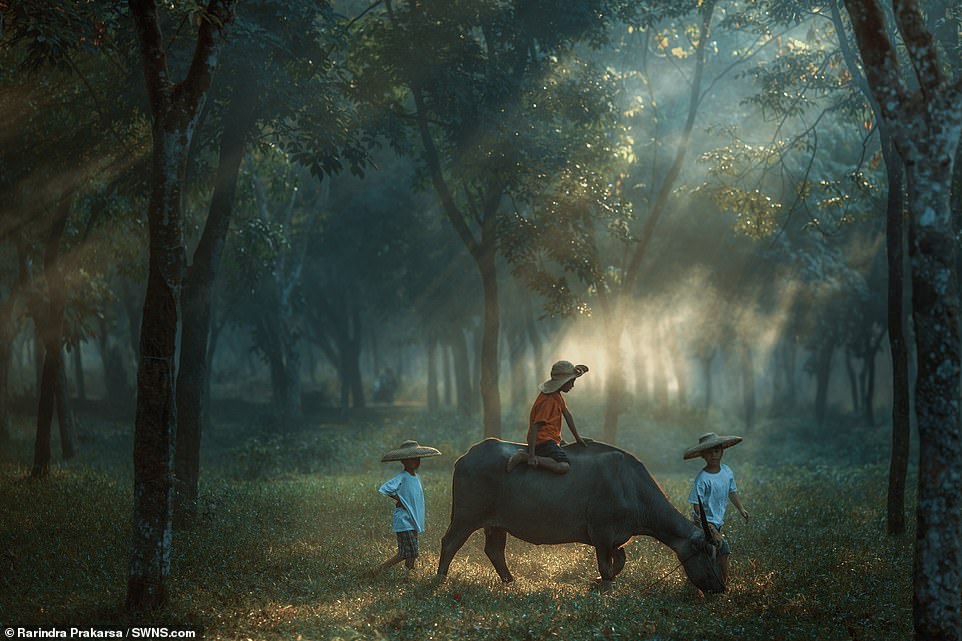 Three brothers can be seen helping out with the chores, helping to transport their family’s cattle through the forest in West Java, Indonesia. The 6.5 million farmers live in rural the rural areas of Indonesia and these small family-run operations produce 90 per cent of the country’s beef, milk and leather. The boys look in control of the cow as it saunters through the grass 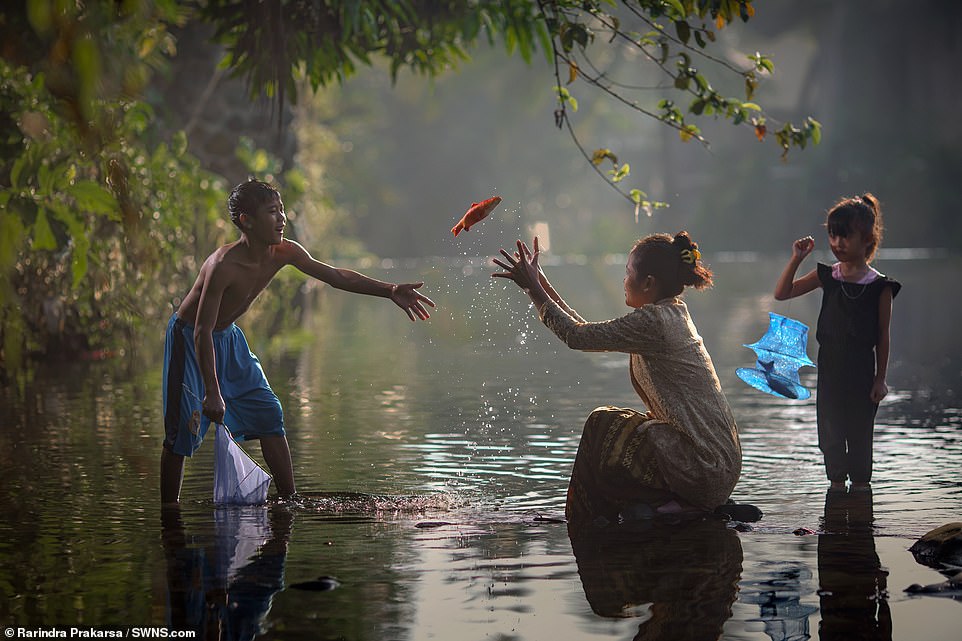 A brother and sister can be seen helping their mum to catch fish from the Citarum River in West Java, Indonesia. Using rudimentary nets, the boy has trapped a fish and throws it to his mother who’s poised to catch it. The sister looks at the flying fish, waiting for the one she has caught to be taken by mum. Fishing nets have been used to catch dinner since the stone age and have changed little since then 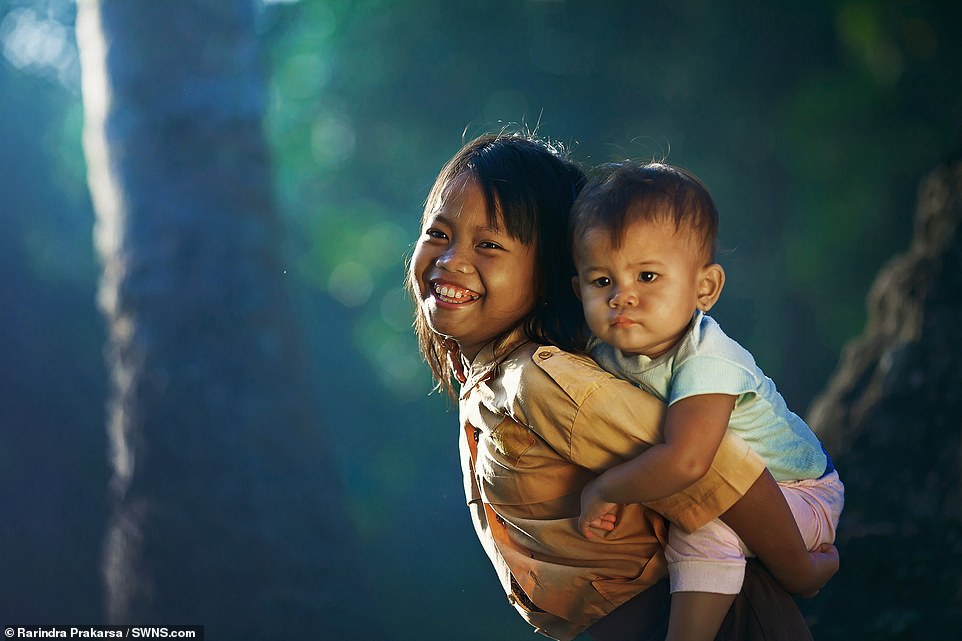 A sister can be seen carrying her brother on her back down to the river in West Java, Indonesia. While the girl looks thrilled to be caught on camera, her brother seems a little bemused. In Indonesia, older siblings may have to give up time to help raise their brothers and sisters. Indonesia is a collectivist society, which means that one person’s actions will have an effect the whole family. Children, like these two, are taught to honour their parents and to give their family a good name 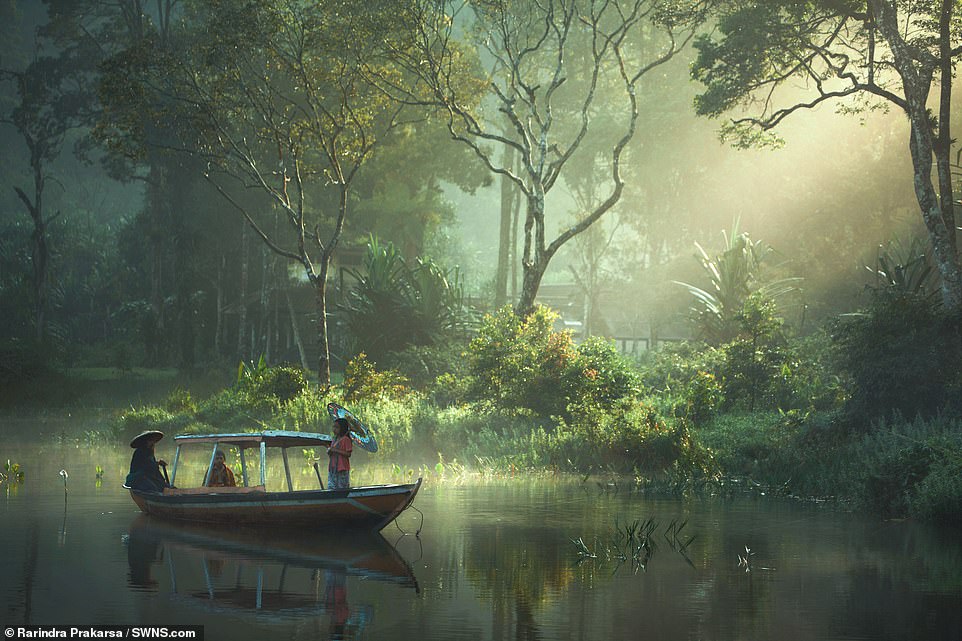 A family can be seen travelling down the Citarum River in West Java in Indonesia as the sunlight pokes through the thick forest canopy. The family stand and sit on the simple skiff as one member holds a Tedung, or parasol, to keep the sun off of her back 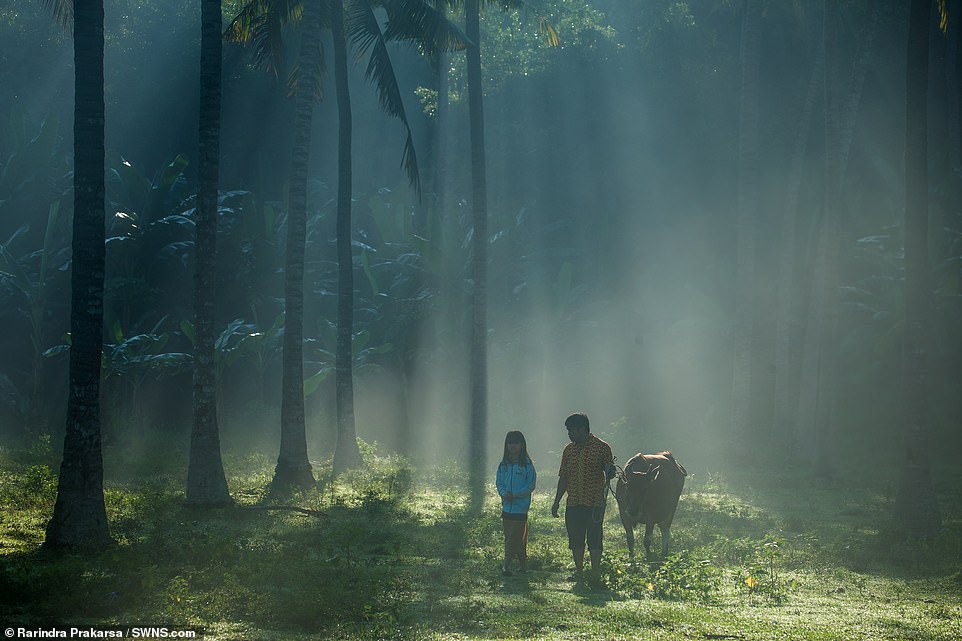 A father talks to his daughter while transporting a cow below the canopy of trees in West Java, Indonesia. Indonesians buy meat from ‘wet markets’ where the meat has recently been slaughtered. This is because refrigerators are too expensive for most Indonesians so they will have to travel back and forth each day 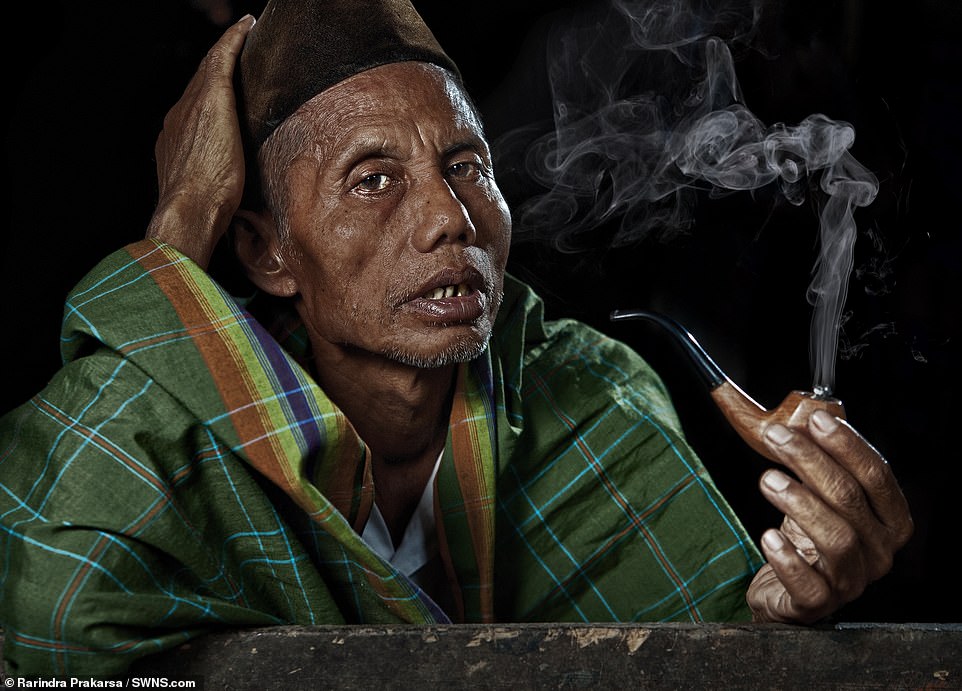 A man can be seen smoking a pipe in his home in West Java, Indonesia. While smoking is in decline across the world, rates in Indonesia are increasing. The country is also one of the biggest producers of tobacco worldwide. 34per cent of the Indonesian population are thought to smoke 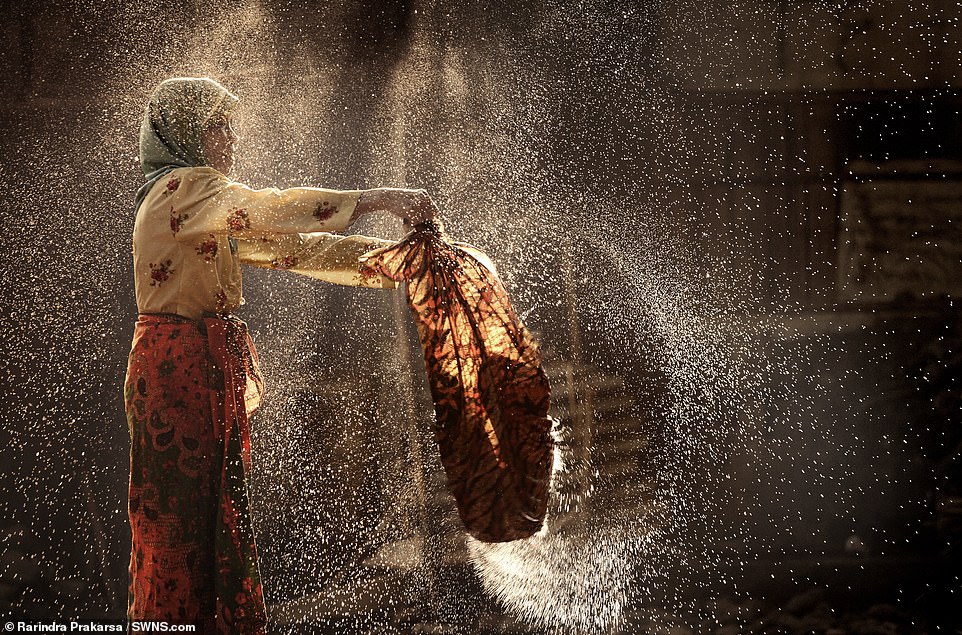 A woman washes clothes in West Java, Indonesia. In rural communities, women often fulfill traditional domestic roles, cooking, cleaning and taking care of children. It is a social norm for the men of the household to provide for his wife and his family. However, women have traditionally had a deal of economic and social freedom, running their own small businesses at local markets and towns 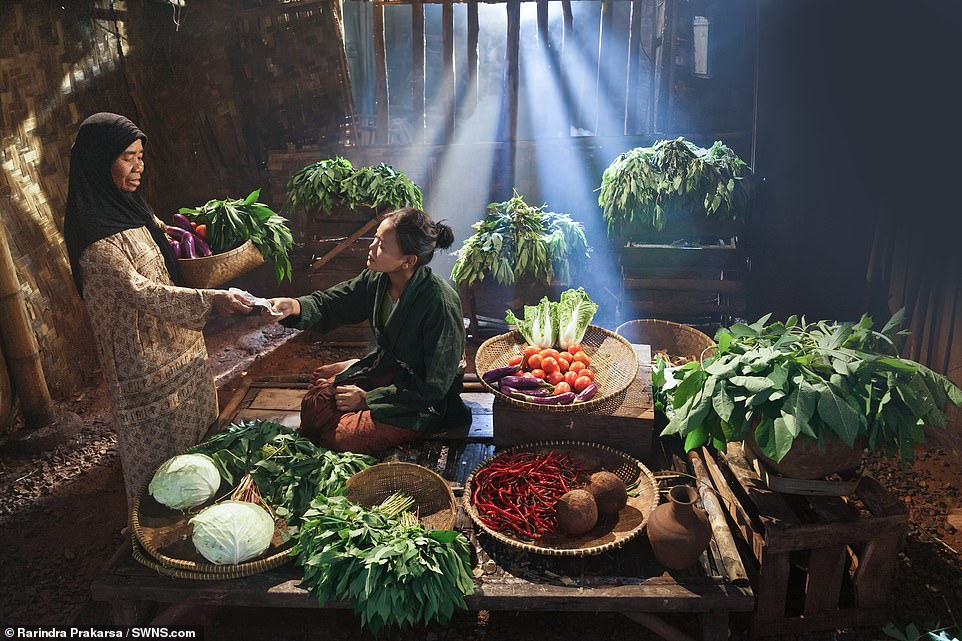 A woman with her head covered in a shawl buys a basket full of locally-picked produce, including aubergines and tomatoes, at a local market in West Java, Indonesia. The market, filled with ingredients collected just days earlier, sells chillis, cabbage, water spinach and tiny birdseye chili 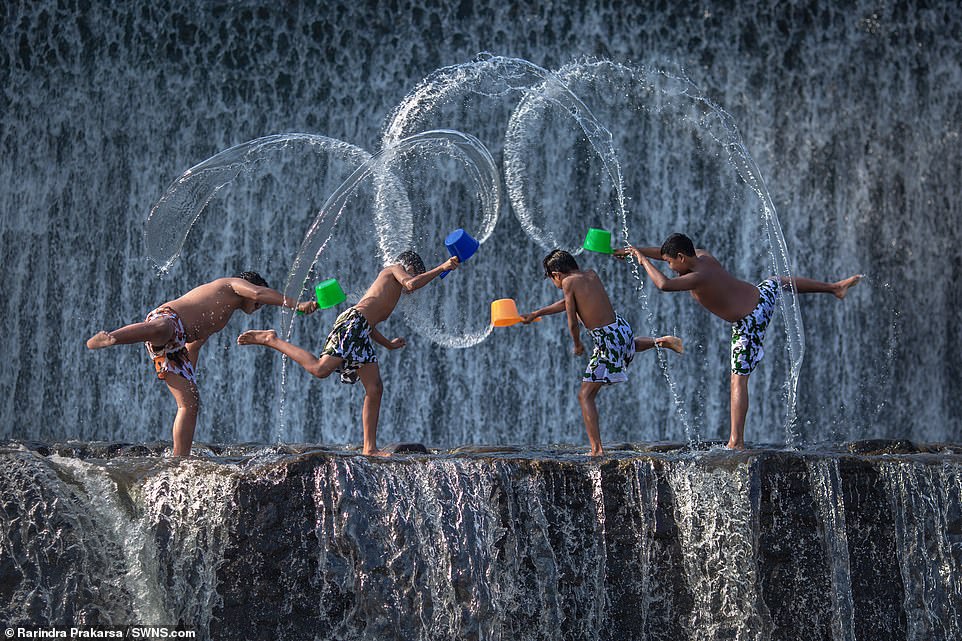 Friends play on a waterfall in the Citarum River in West Java, Indonesia. The photographer has caught the perfect shot as each of the boys flings water on to the boy balancing next to him. The group of friends have perched their left legs on the precipice of the fall