Shocking video shows the brutal moment a Florida substitute teacher body slams a student on to the floor while breaking up a fight between two pupils.

The brawl was caught on a cell phone camera and shows the teacher raise one 15-year-old student – who is epileptic and has a broken arm – into the air then violently drop him to the ground at Terry Parker High School in Jacksonville.

The altercation took place on Monday and the video shows the substitute teacher dressed in a green polo struggle trying to tear the feuding male students apart.

A substitute teacher (pictured in green polo) at Terry Parker High School in Jacksonville, Florida was caught on camera body slamming a student on Monday while trying to break up a fight 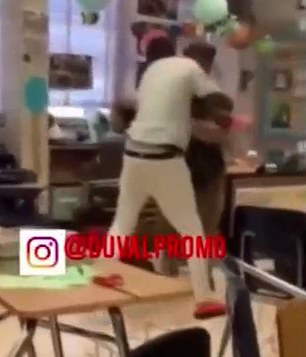 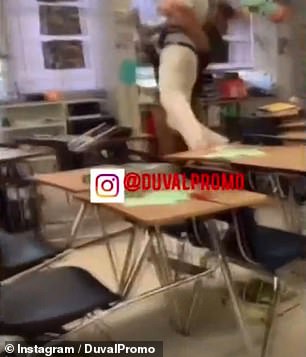 Trying to subdue the students the teacher raises the boy in white – who is 15, has a broken arm, and has epilepsy – in the air to drop him 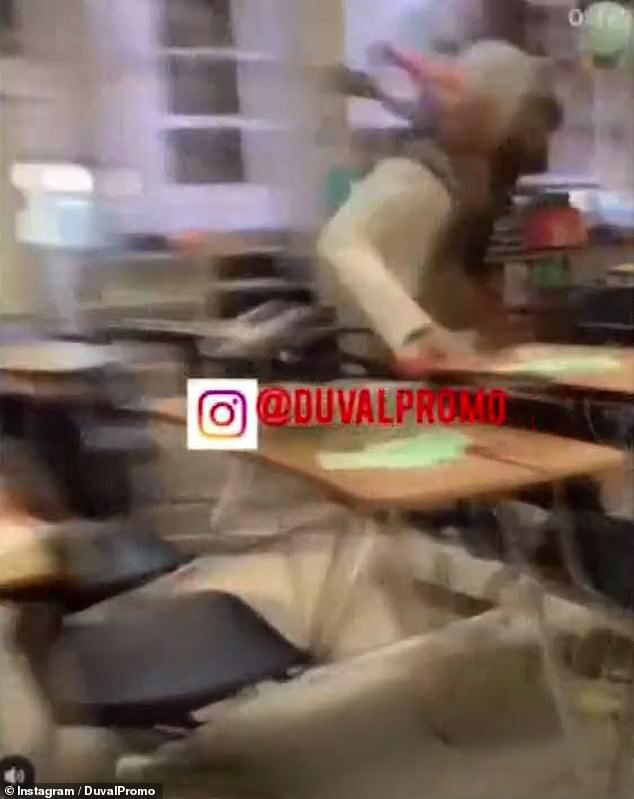 The brutal moment: This is the moment the teacher, dressed in a green polo, picks up a 15-year-old boy dressed in white with a cast on his arm, and drops him onto the ground 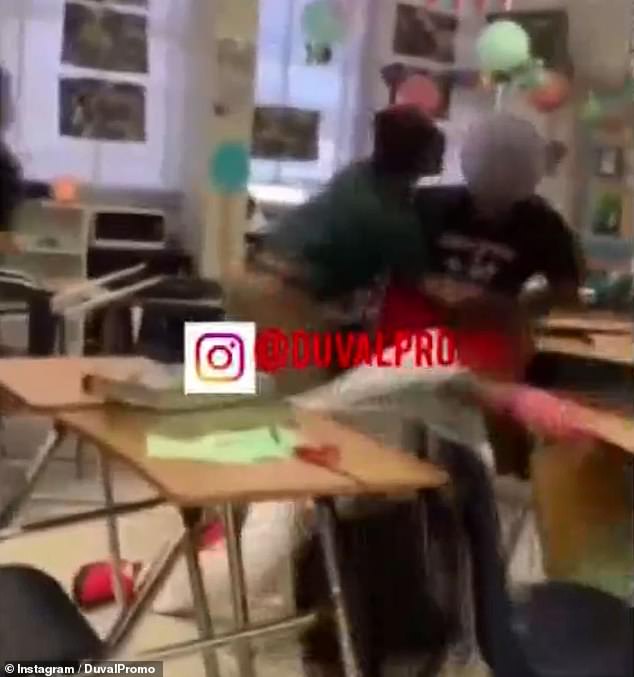 After the student dressed in white is on the ground, the teacher then goes after the second student, dressed in black, by pushing him to the ground

The fight took place in the classroom in front of other students and continued in the hallway.

Towyhia McAffee said that her 15-year-old son was the boy thrown to the floor in the video.

Her son is pictured in a light colored shirt and bottoms with a pink cast on his right arm, which is injured. 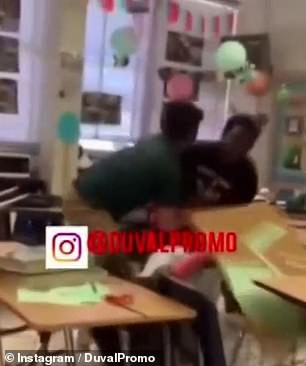 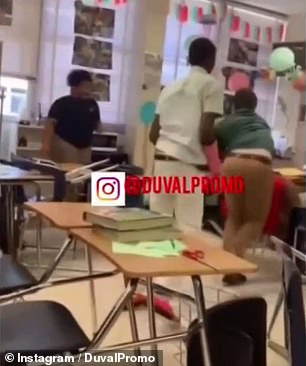 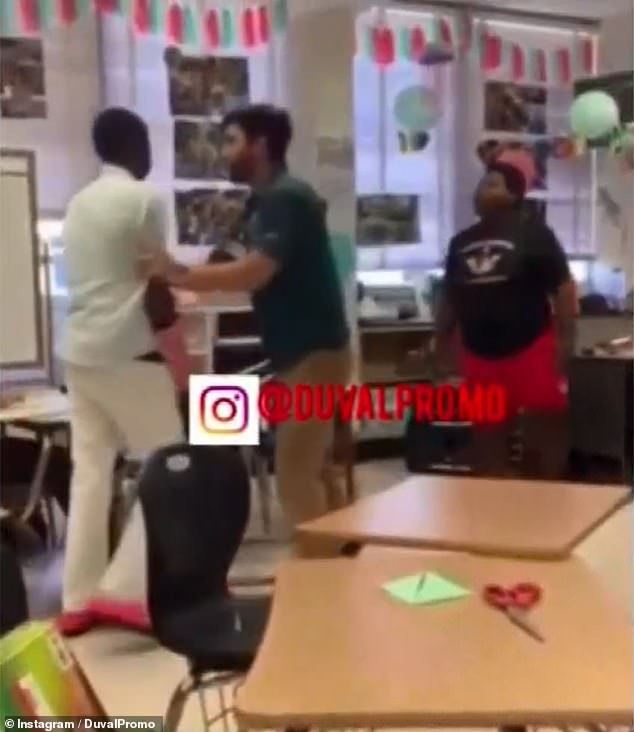 ‘You slammed my son. You picked him up and slammed him,’ the outraged mother said of the teacher to ActionNewsJax.

‘He’s epileptic and he has a broken arm … Why did you pick him up and slam him like that?’ she added.

She said she intends to file a complaint.

The DCPS said they won’t comment on information on the teacher involved in the fight because fighting is a ‘student disciplinary situation’. 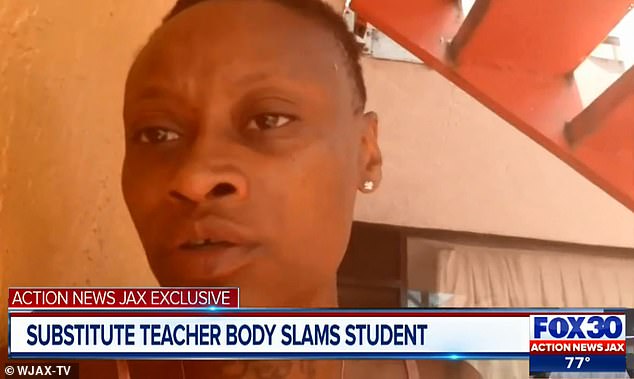 Towyhia McAffee (above) said that her 15-year-old son was the student dressed in white, wearing a cast, who was body slammed in the video 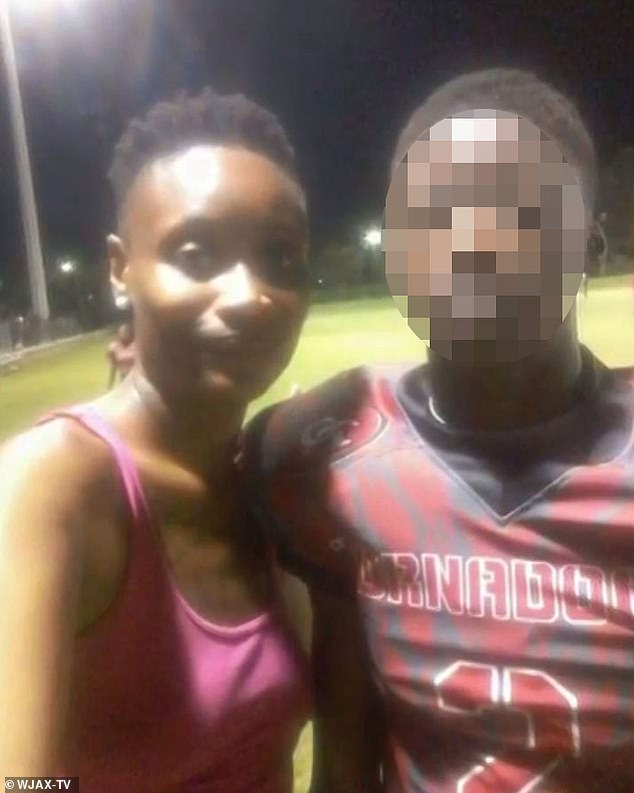 ‘He’s epileptic and he has a broken arm … Why did you pick him up and slam him like that?’ she said outraged at the fight. McAffee pictured above with son 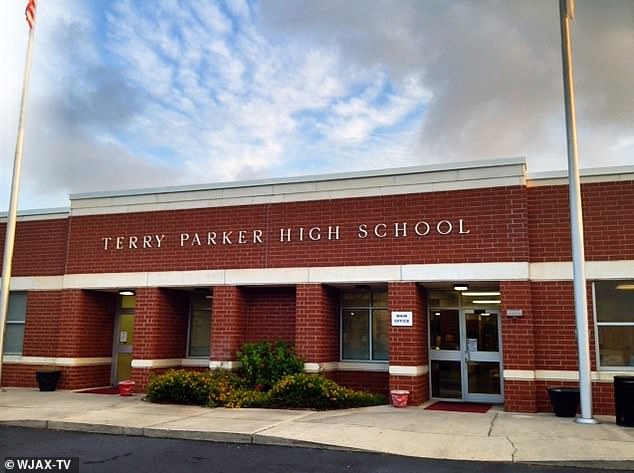 Just last week speaking to Action News Jax, Duval County Public Schools (DCPS) Superintendent Dr. Diana Greene said there was no reason a teacher should ever hit a student when asked about five recent allegations of teachers striking students within the school district.

ADCPS spokesperson told First Coast News: ‘Fighting is a student disciplinary situation, and we cannot provide any details or commentary on a specific incident. I can tell you that fighting is unacceptable on our campuses and students who engage in this behavior will face discipline according to the Student Code of Conduct.’

The DCPS has yet to respond to DailyMail.com’s request for comment.

By DCPS policy, a teacher is allowed to intervene in a physical altercation to protect students from harming themselves and for physical safety.